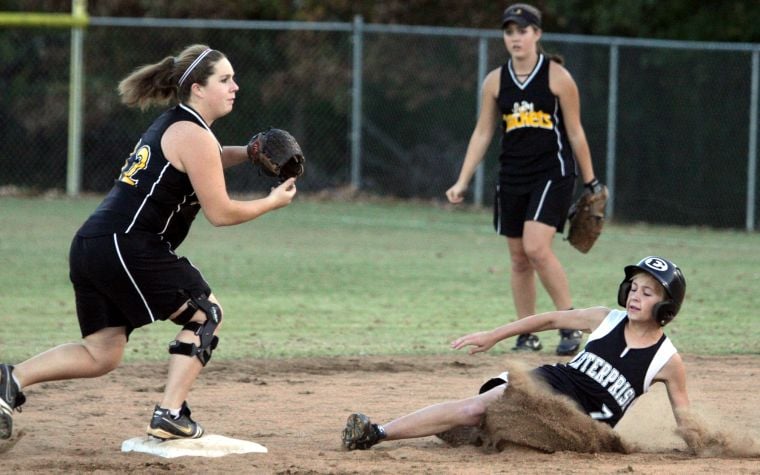 Enterprise's Blakely Riley is forced out at second base by Union's Hayley Stephens on Thursday in the MHSAA Class 2A South State championship. 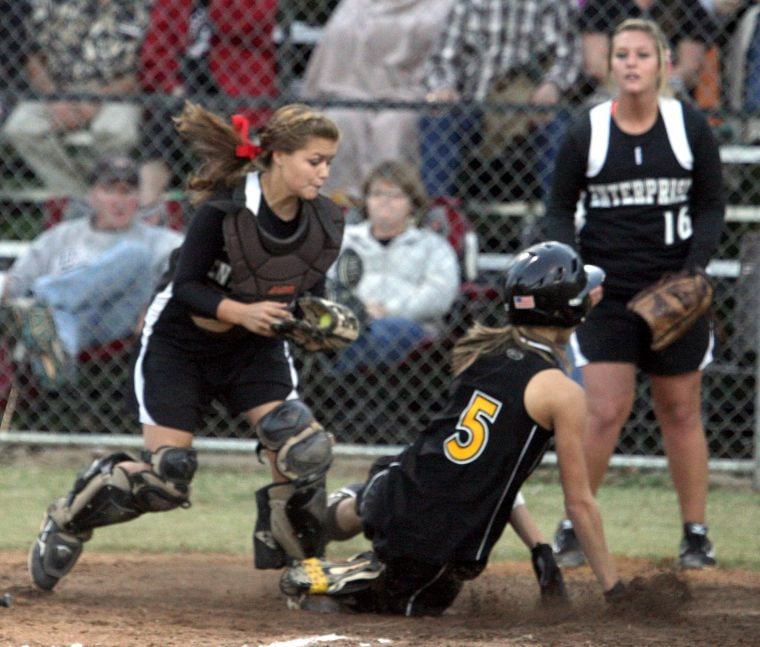 Union's Casey Cherry scores a run for the Yellowjackets as Enterprise catcher Erika Taylor tries to get the tag down Thursday in the Class 2A South State championship series in Union.

Enterprise's Blakely Riley is forced out at second base by Union's Hayley Stephens on Thursday in the MHSAA Class 2A South State championship.

Union's Casey Cherry scores a run for the Yellowjackets as Enterprise catcher Erika Taylor tries to get the tag down Thursday in the Class 2A South State championship series in Union.

After slipping past Enterprise in Game 1 of the MHSAA Class 2A South State championship seroes Thursday, Union found itself in a huge hole as the Bulldogs stormed back for a lopsided 17-0 run-rule win in Game 2. Enterprise then kept that momentum rolling as it led the Yellowjackets 7-2 after the top half of the fourth inning in a decisive Game 3.

However, Union stormed back with a never say die swagger to score 10 unanswered runs over the course of the next two innings and coach Todd Viverette's ’Jackets secured a spot in Saturday's State title series at the V.A. Fields in Jackson.

“I really don't know what to say other than give the credit to the good Lord,” said Viverette of his team's comeback performance. “The girls had faith in the Lord and faith in themselves. I don't know how else to explain coming back from a 17-0 loss and being down 7-2 other than that.

“Enterprise is a great team and they crushed the ball tonight. I can't say enough about our girls with how they hung in there. I told them after that second game, I told the girls it doesn't matter if they beat us 50-0 the series is still even.

“We might have just beat the best team in the state in Class 2A tonight.”

Enterprise (23-7), fresh off the big win in Game 2, kept its momentum rolling at the start of Game 3 as Bethany Volking, Morgan Porter and Hayleigh Harper all got aboard to load the bases. Randa Mathis would bring them all home on a double to centerfield and Harley Smith would bring Mathis home on a sacrifice fly for a 4-0 lead in the top of the first inning.

Union (18-10) turned around in the bottom half plating two runs of its own on a double by Delaina Wilson. EHS would get to know Wilson more later in the contest.

The Bulldogs got right back to work as Harper would plate Volking on a base hit up the middle and Smith would get her second RBI of the game to make it a 6-2 advantage after two innings. Harper again drove in a run in the top of the fourth for the five-run cushion.

Be that as it may, the Yellowjackets kept chipping away plating two runs in the bottom of the fourth via back-to-back solo home runs from Hayley Stephens and Wilson. Wilson would put Union ahead for good in the very next inning with a huge three-run bomb over the left-field fence.

“This was a tough one,” said EHS coach Josh Perkins. “It’s a game of momentum.

“One minute it’s going your way and the next it’s not. Things change. They beat us tonight and they deserve it. I just want to offer my congratulations to coach Viverette and his team.”

Harper led the way for Enterprise in Game 2's rout going 4 for 4 with two home runs, a double and six RBIs. Mathis was also 4 for 4 with a home run, three singles and two RBIs, while Porter and Volking each drove in two runs.

Taylor Holmes paced UHS' offense in Game 1 with a double and three RBIs and Ebony Buckley drove in two runs of her own. Jessica Whittington had an RBI-double, while Stephens had a run-scoring base knock.

Union will take on Mentachie? Saturday at 11 a.m.