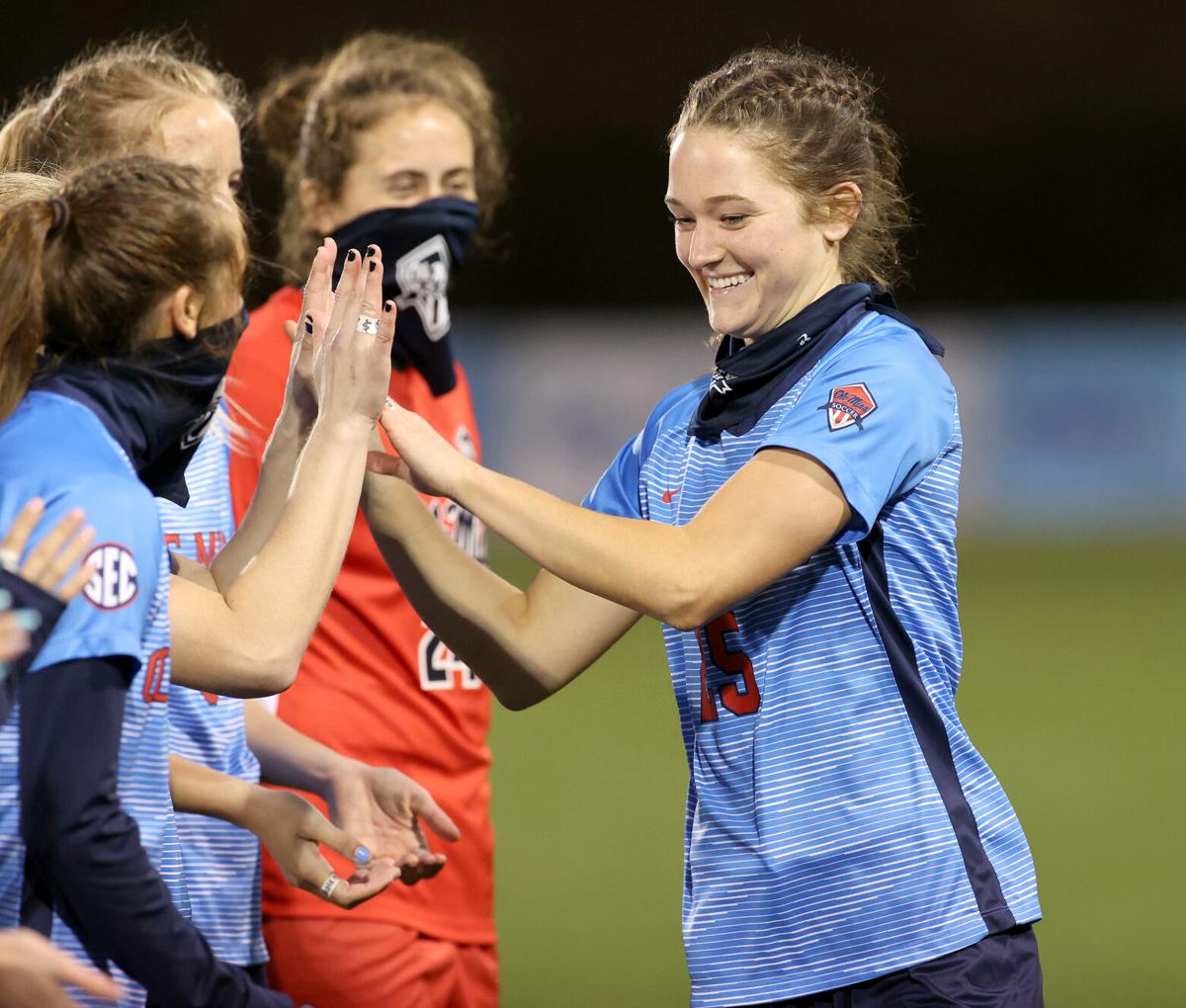 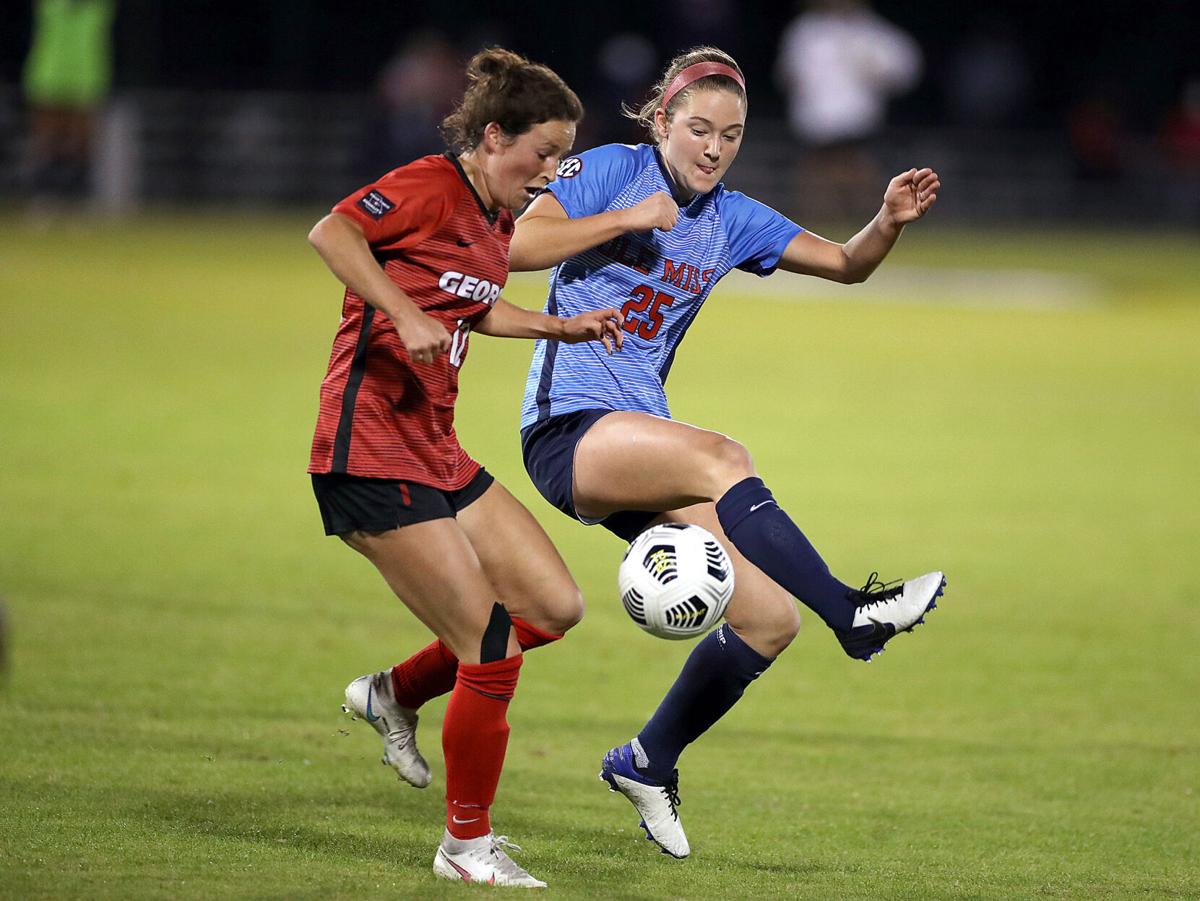 Ole Miss defender Lucy Green, right, battles for the ball during the Rebels' game against Georgia Oct. 31, 2020, in Oxford.

Ole Miss defender Lucy Green, right, battles for the ball during the Rebels' game against Georgia Oct. 31, 2020, in Oxford.

Lucy Green’s freshman season at Ole Miss began with a couple of eye-opening moments. It concluded with a memory she’ll cherish: a run in the NCAA Tournament.

After graduating from West Lauderdale in 2020, Green arrived on campus at Oxford a year ago ready to embrace a new level of soccer. She started seven of the Rebels’ fall contests, include the SEC Tournament game against LSU, and played in all nine. Ole Miss then swept its spring schedule and won its first two games in the NCAA Tournament via penalty kicks before falling to Duke 1-0 in the Sweet 16.

“It was honestly the most incredible experience,” Green said. “I’m just thankful to be part of such a great team. I’ll never forget the feeling.”

When she first joined the Rebels for team activities in June 2020, Green said even the practices were a big adjustment from high school. Once she began playing in games, Green said she realized how truly advanced the collegiate level was, but having supportive coaches and teammates made the transition much more smooth.

“It was so much fun,” Green said. “Everyone on the team is incredible. They’re all my best friends, and it was so fun getting to meet everyone and hanging out. In my first practice, I was like, ‘Oh my gosh, this is so hard.’ It was so different than anything else I’d experienced, a completely new level. Our first game was Texas A&M, and that was another time I realized this was so much higher than anything I had ever played in before. There was definitely a lot of adjusting, but thankfully I have a great coaching staff and teammates that made everything go well.”

In addition to moving to left-back after playing right-back at West Lauderdale, Green said the college game’s speed of play was the biggest challenge for her at first.

“Everyone is so good,” Green said.

That didn’t stop her from earning plenty of playing time, though, and Green said she was grateful for the opportunity to get on the field as a true freshman.

“I just felt so blessed,” Green said. “I’ve always tried to be a hard worker and do anything that was asked of me, and I’m thankful the coaches saw I could make a positive impact on the field and trusted me enough to put me out there as much as they did.”

Playing a sport during the 2020-21 school year came with the added challenge of navigating the COVID-19 pandemic, especially in the fall.

“Thankfully we had a few girls get it before the season, and during the fall season no one got it,” Green said. “We basically had to stay in a bubble and tried to limit contact outside of our team. I think we did a good job. It was definitely hard, and everyone was trying to stay away from COVID so we could have a season.”

The Rebels went 4-4 in SEC play during the fall and had a first-round exit in the SEC Tournament, and Green admitted confidence wasn’t high going into the spring season until Ole Miss head coach Matt Mott expressed his belief in the players before the spring slate of games began.

“I remember Coach Mott saying we could win all of our games and make it to the NCAA Tournament,” Green recalled. “After the fall season we felt like we wouldn’t, but when we came back he said we could do it, so we were all super excited and said, ‘Let’s do this.’”

And that’s exactly what they did, going 6-0 during the spring’s regular season and also winning an exhibition game against Arkansas Little Rock right before the NCAA Tournament started. In Ole Miss’ first-round game against Bowling Green, the score was tied 0-0 after regulation and two overtime periods, forcing the game to go to penalty kicks.

Green was tabbed as the sixth player to attempt a penalty kick in that game, which was yet another new experience in a season of new experiences.

“I don’t know if my coaches know this, but I think that was the first PK I had ever kicked,” Green said with a chuckle. “We definitely didn’t go to PKs much at West Lauderdale. I was sixth up, so I was nervous, but we had practiced for weeks before the tournament just to prepare because we knew it was a possibility.”

After making her kick, Green watched teammate Mo O’Connor make the Rebels’ seventh kick, and Bowling Green missed its seventh shot, allowing the Rebels to advance. When she saw her kick go in, Green said she experienced a wave of emotions.

“Oh my gosh, it was just a rush and a relief,” Green said. “I was really excited.”

In the second round, Ole Miss went on to beat Southern Cal in penalty kicks after coming from behind 2-0 to tie the game at 2-2 at the end of regulation. That sent the Rebels to a Sweet 16 matchup against Duke, which they dropped 1-0.

The early success has Green hungry for more going into her sophomore year. While she’s currently taking a break from soccer activities, Green said she returns to campus for team activities July 1, and she’s looking forward to building on what they accomplished in the spring.

“As we got to playing more we started to click, and I think that momentum will help us improve this season,” Green said. “I can’t wait to get back and start training with everyone. Of course, the NCAA Tournament and the SEC Tournament are our goals.”