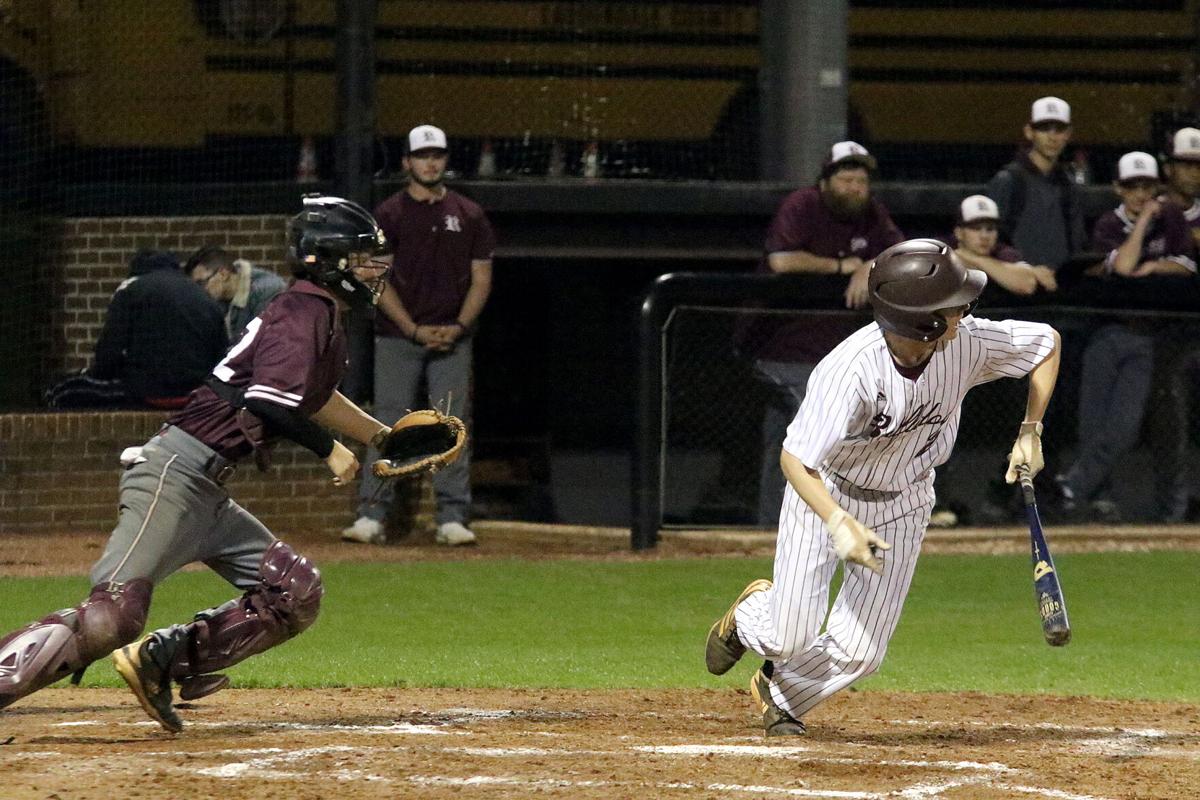 Clarkdale’s Walker Swearingen hustles to first after laying down a bunt during the Bulldogs’ home game against Raleigh Friday, March 26, 2021. Swearingen reached first on the bunt for a single. 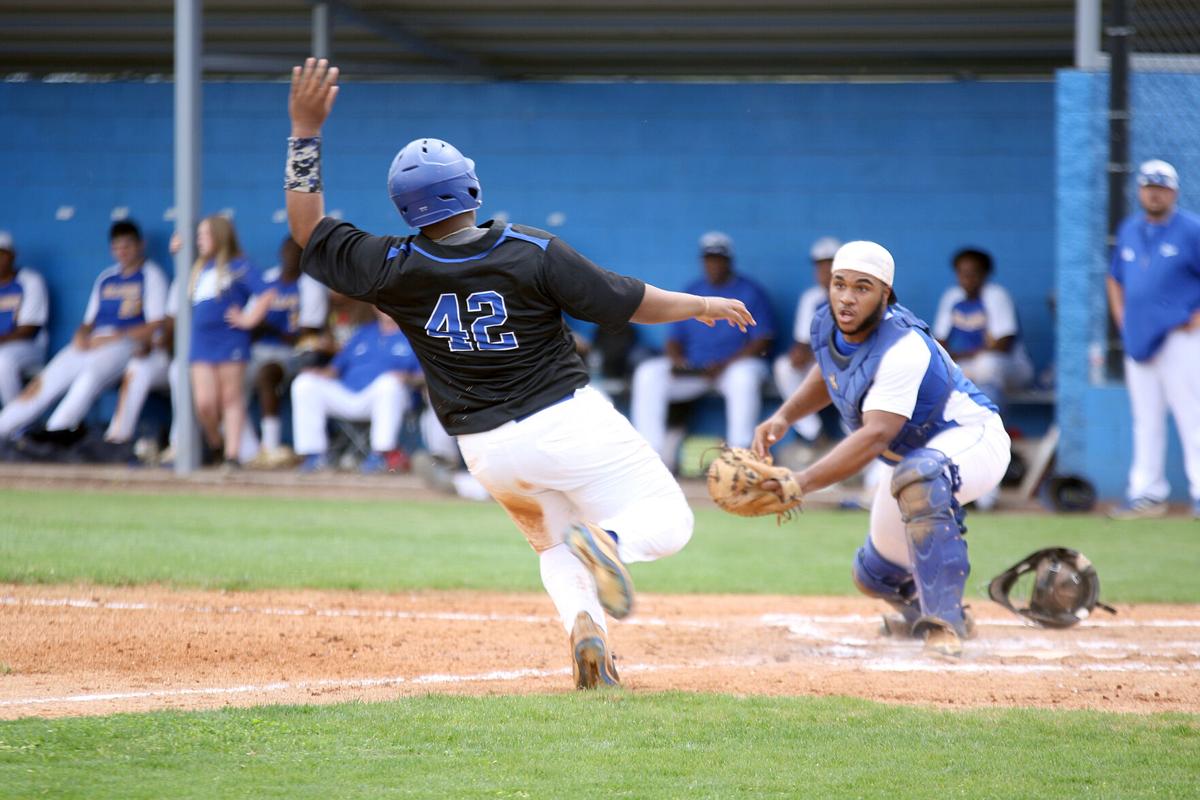 Meridian High School’s Eddie Odom tries to beat the throw to the plate during Saturday’s game against Bay Springs at Q.V. Sykes Park. Odom was called out. 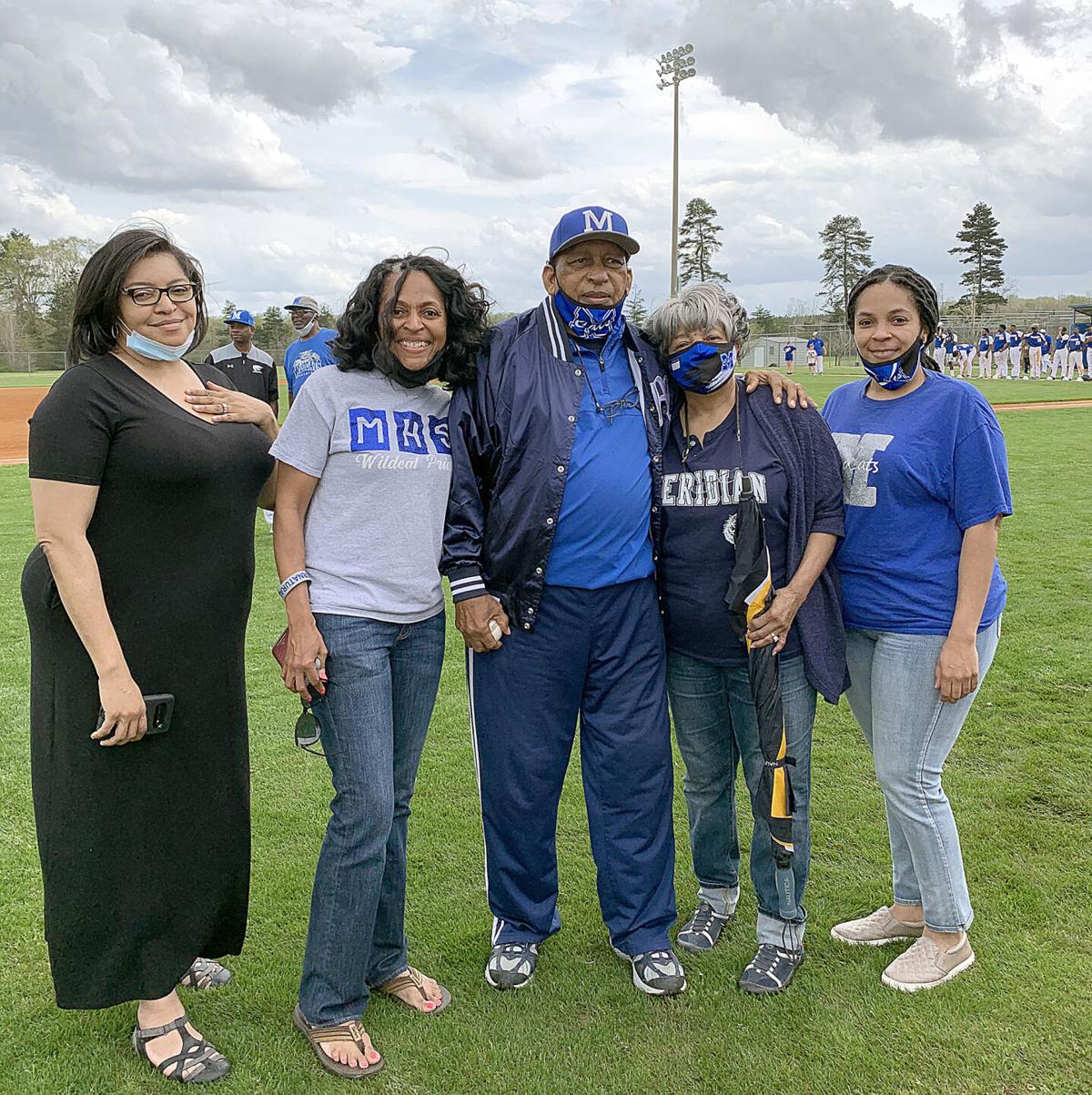 MHS honored former baseball coach Bill McFarland, center, who led the Wildcats for 22 seasons and amassed a 462-181 record, Saturday afternoon before the game. McFarland led MHS to a state championship in 1995 and was inducted into the Mississippi High School Athletic Association Hall of Fame in 2016. Pictured with him are, from left, LaSandra McFarland-Ruffin, Jackie McFarland, Bonnie McFarland and Lori McFarland.

Walker Swearingen pitched a complete game and was 3-for-3 at the plate for Clarkdale as the Bulldogs shut out Raleigh 16-0 in Friday night prep baseball action.

Clarkdale had 12 hits as a team, and Colson Thompson finished 4-for-4 with two doubles and five RBIs, while Gavin Moffett had a double and three RBIs.

“We hadn’t played the greatest ball out here (at home) the last couple of weeks, but we’ve been fortunate enough to get wins,” Clarkdale head coach Scott Gibson said. “I thought we put a lot of things back together tonight, and I’m really proud of them.”

Swearingen pitched five innings and surrendered just one hit and two walks while striking out 11 for Clarkdale. The game was called after the fifth inning due to the mercy rule.

“Walker was phenomenal on the mound, and I thought we put a lot of good at-bats together to help him out,” Gibson said. “This is really what he’s given us on the mound all year. He’s scuffled a little bit offensively lately, but it was a good night for him to get things going again.”

Cooper Galyean and Camden Ivey combined to pitch seven shutout innings for Enterprise as the Bulldogs edged Southeast Lauderdale Friday on the road.

Galyean got the start for the Bulldogs and surrendered just one hit and two walks while striking out two over 3 1/3 innings. Ivey finished the game in relief, pitching 3 2/3 perfect innings with two strikeouts.

Blake Wilkins doubled and drove in a run for Enterprise, and Trace Roy, Jagger Whitaker and Galyean each collected a hit. 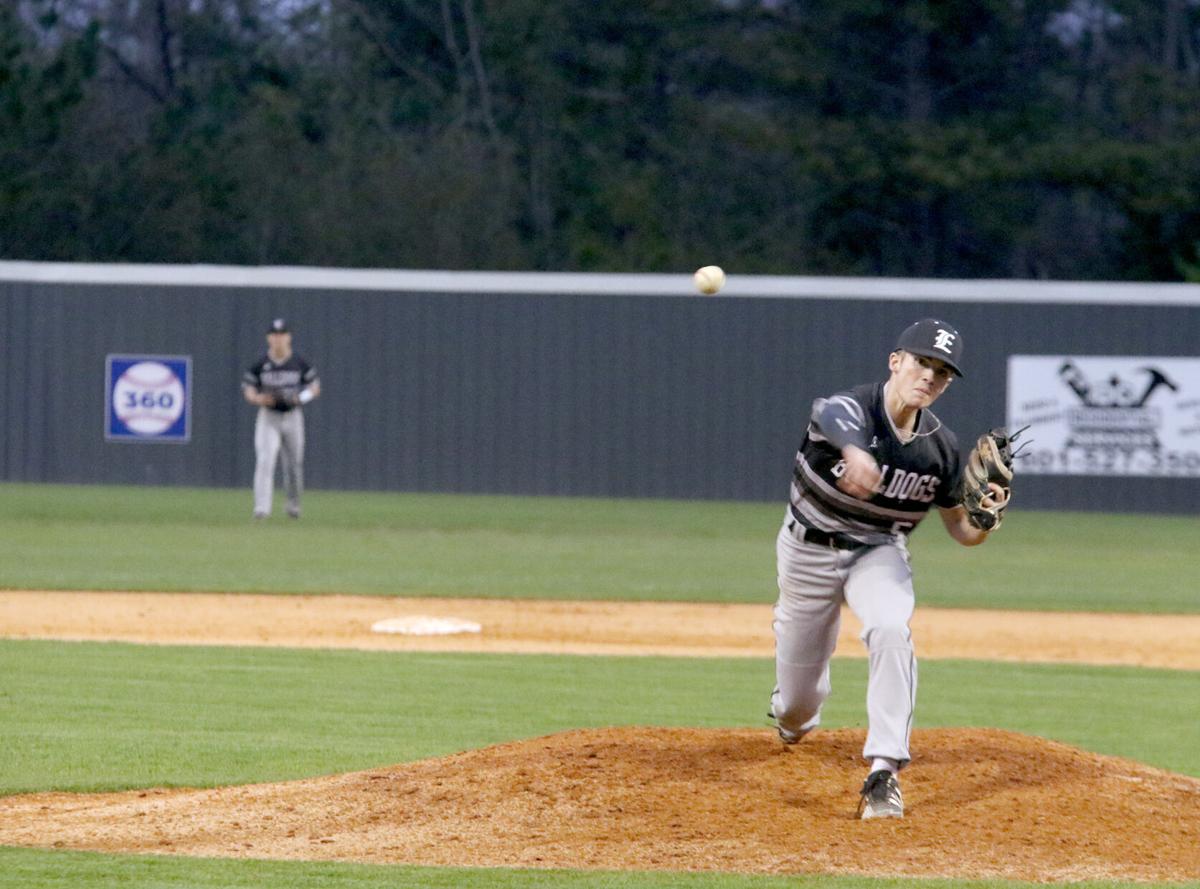 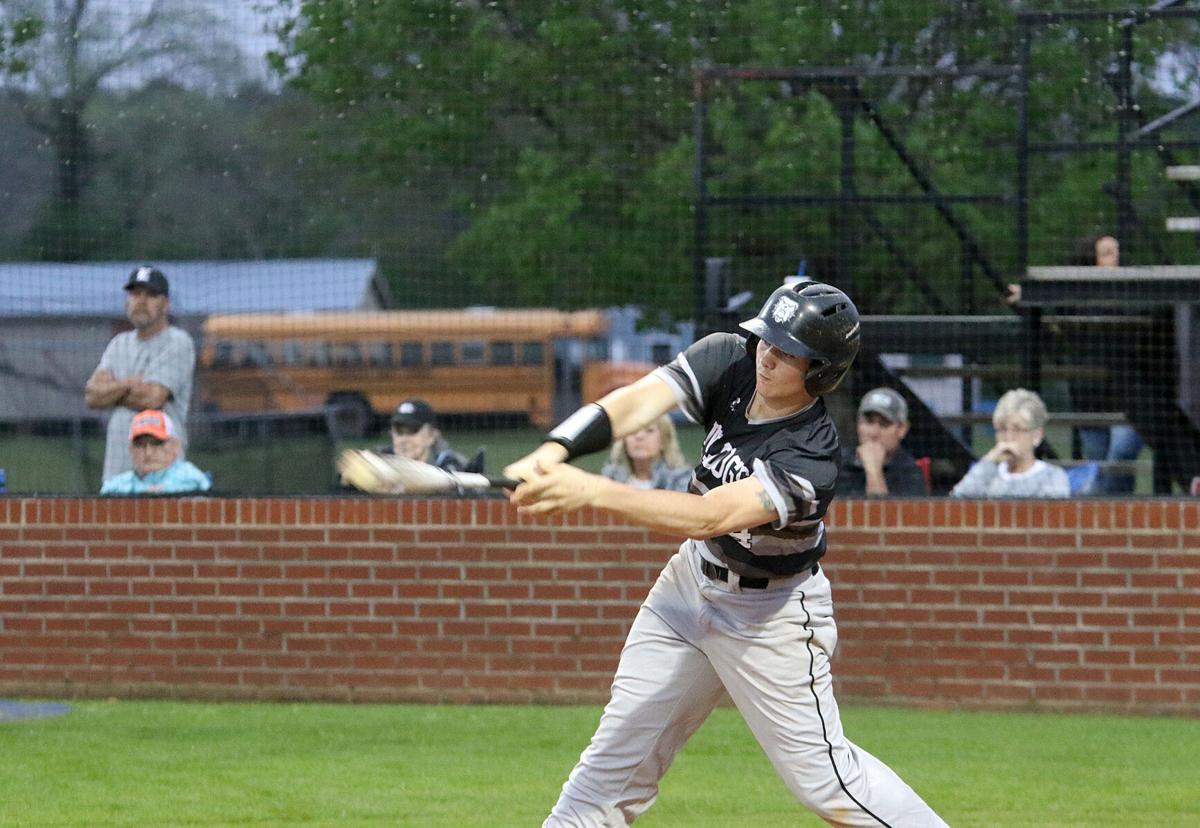 Enterprise’s Blake Wilkins connects on a pitch during the Bulldogs’ game Friday at Southeast Lauderdale. Wilkins finished 1-for-2 with a double, a walk and an RBI. 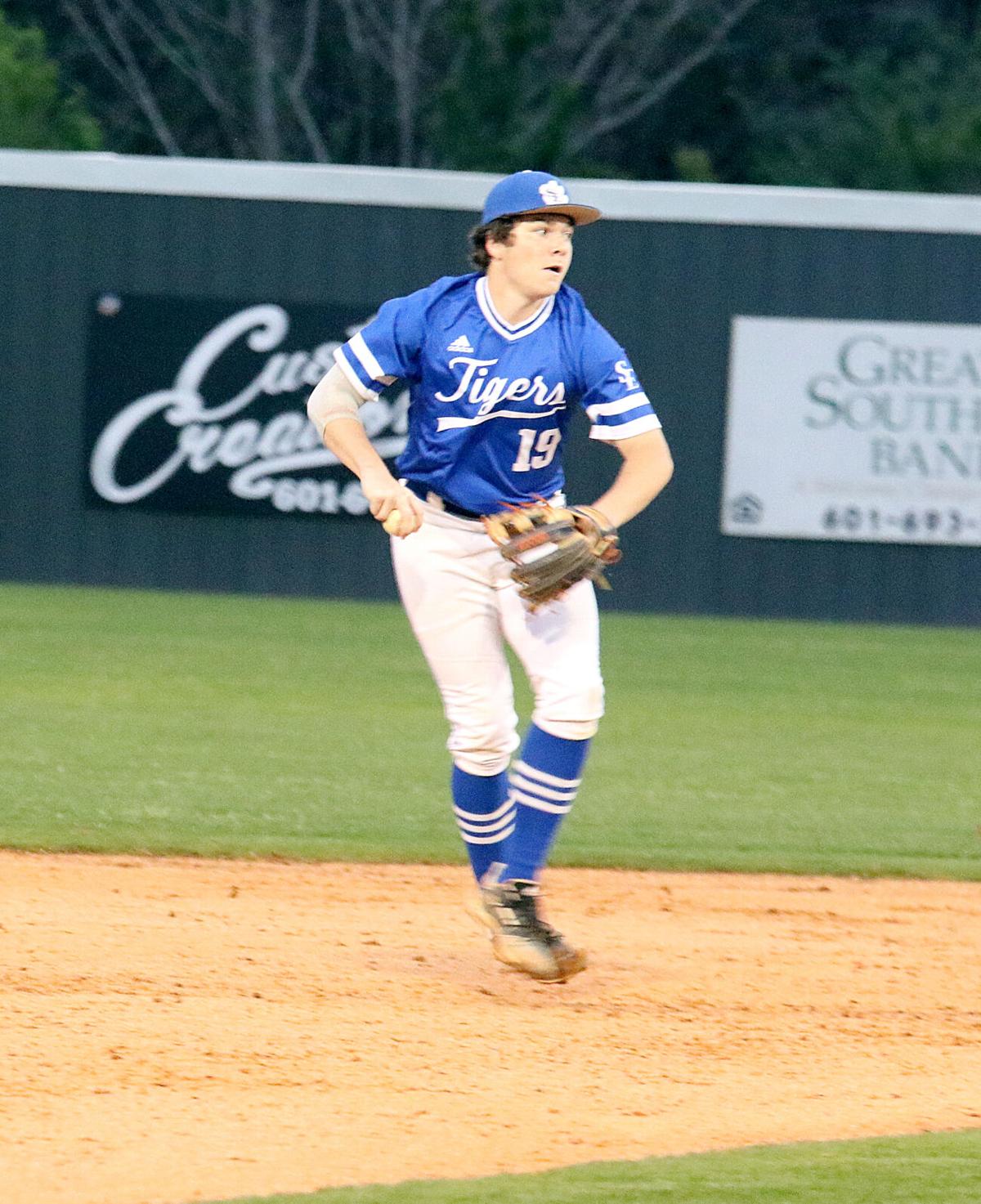 Southeast Lauderdale’s Braxton Anthony gets set to throw to first after fielding a ground ball during the Tigers’ home game against Enterprise Friday.

Enterprise’s Blake Wilkins connects on a pitch during the Bulldogs’ game Friday at Southeast Lauderdale. Wilkins finished 1-for-2 with a double, a walk and an RBI.

Southeast Lauderdale’s Braxton Anthony gets set to throw to first after fielding a ground ball during the Tigers’ home game against Enterprise Friday.

Will Morris was 2-for-3 with a double and a run scored for Lamar, but the Raiders fell to Winston Academy Friday.

Liam Gilbert finished 2-for-4 for Lamar, and Ty Herrington, Eli Huebner and Ross Polizzi each had a double.

West Lauderdale collected wins of 14-0 and 13-0 against Louisville in a doubleheader Friday night.

Mason Willis pitched the first game and had nine strikeouts in three perfect innings for the Knights in their 14-0 win. He also homered and walked twice at the plate, and Brett Busbea finished 2-for-3 with a double and two RBIs. Cade Kennedy also doubled and scored twice for West Lauderdale. The game was called after the third inning.

In the second game, Cole Wilkerson picked up the win, pitching four innings and giving up one run on two hits and two walks while striking out nine. Commondre Cole was 3-for-3 with a double, two RBIs and two runs scored, and Leighton Jenkins went 2-for-4 with a triple and three runs scored. Matt Ethridge finished 3-for-4 with two RBIs, and Cade Kennedy doubled and drove in two, while Willis had a double and scored twice.

Tyson Wood was 2-for-4 with a double for Newton County, but a two-run seventh inning for Florence proved the difference Friday.

Hayze West doubled and drove in four runs for the Cougars, while Braxton May also had a double.

The Wildcats tallied 11 hits, nine walks and 15 RBIs as they won big against Bay Springs Saturday at Q.V. Sykes Park.

Bland started for MHS and pitched all five innings to get the win. He surrendered four earned runs on six hits and one walk while striking out four.

Prior to Saturday’s game, MHS honored former baseball coach Bill McFarland, who led the Wildcats for 22 seasons and amassed a 462-181 record. McFarland led MHS to a state championship in 1995 and was inducted into the Mississippi High School Athletic Association Hall of Fame in 2016.

Cade Kennedy homered, and Dylan Brown got the win for the Knights as they defeated Southeast Lauderdale Saturday on the road.

Brooks Buchanan and Brandon Epting both went 2-for-4 with two RBIs for the Knights, while Jackson Parker finished 2-for-3. One of Epting’s hits was a double.

For Southeast Lauderdale, Mason Grogan had a double, and Braxton Anthony hit a home run and drove in two.

Houston Wedgeworth went 2-for-4 with a double and four RBIs for Clarkdale as they beat Wayne Academy Saturday on the road.

Daniel Swain went 2-for-3 with three RBIs for Enterprise as the Bulldogs beat Union Saturday.

Cooper Galyean doubled for Enterprise, and Cole Blackwell had two RBIs. Jake Shelby got the win, pitching five innings and giving up four runs, one earned, on six hits and one walk while striking out six.

For Union, Jaylon Buckley finished 2-for-5, and Henry Thornton had two RBIs.

David Burton finished 2-for-4 with a double and three RBIs for Newton County as the Cougars bounced back from Friday’s loss with a win Saturday.

MERIDIAN - Funeral services for Mrs. Carol Brown were held on Monday, April 12, 2021, at noon, in the Enterprise Funeral Home Chapel. The viewing was held from 10:30 a.m.-noon the same day. Burial was in the Daleville Cemetery.

Funeral services for Mrs. Dixie Gilbert Pigford will begin at 11 a.m., Tuesday, April 13, 2021, at St. Paul's Episcopal Church of Meridian with the Rev. Austin McGehee officiating. Service music will be provided by Organist and Choirmaster David Benson. Interment will follow at Magnolia Ceme…