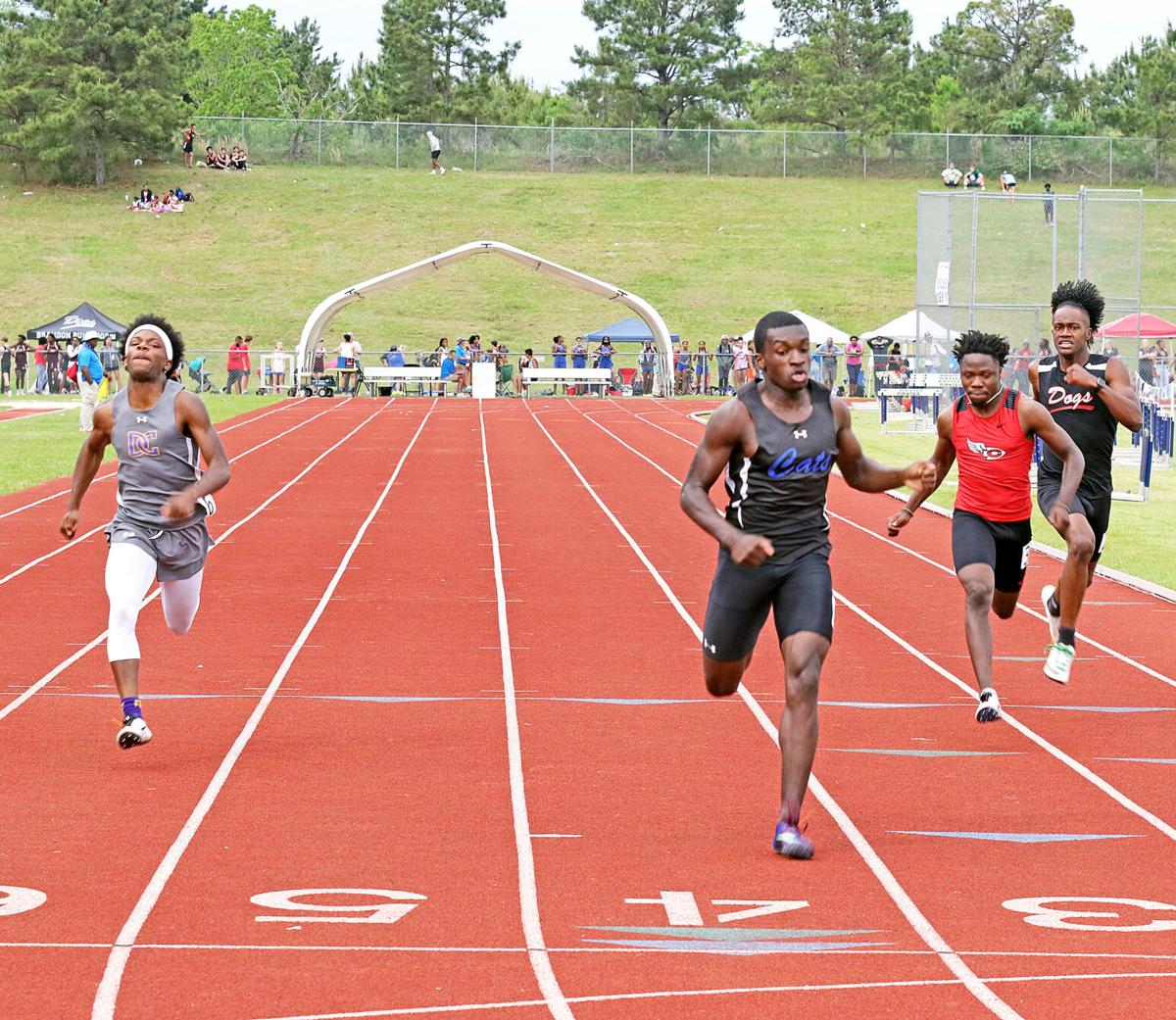 Meridian High School's Jonathan Vaughn, center, competes in the 200-meter dash at the MHSAA state track meet this past weekend in Pearl. Vaugh, a junior, placed first with a time of 21.9 seconds, an MHS record. 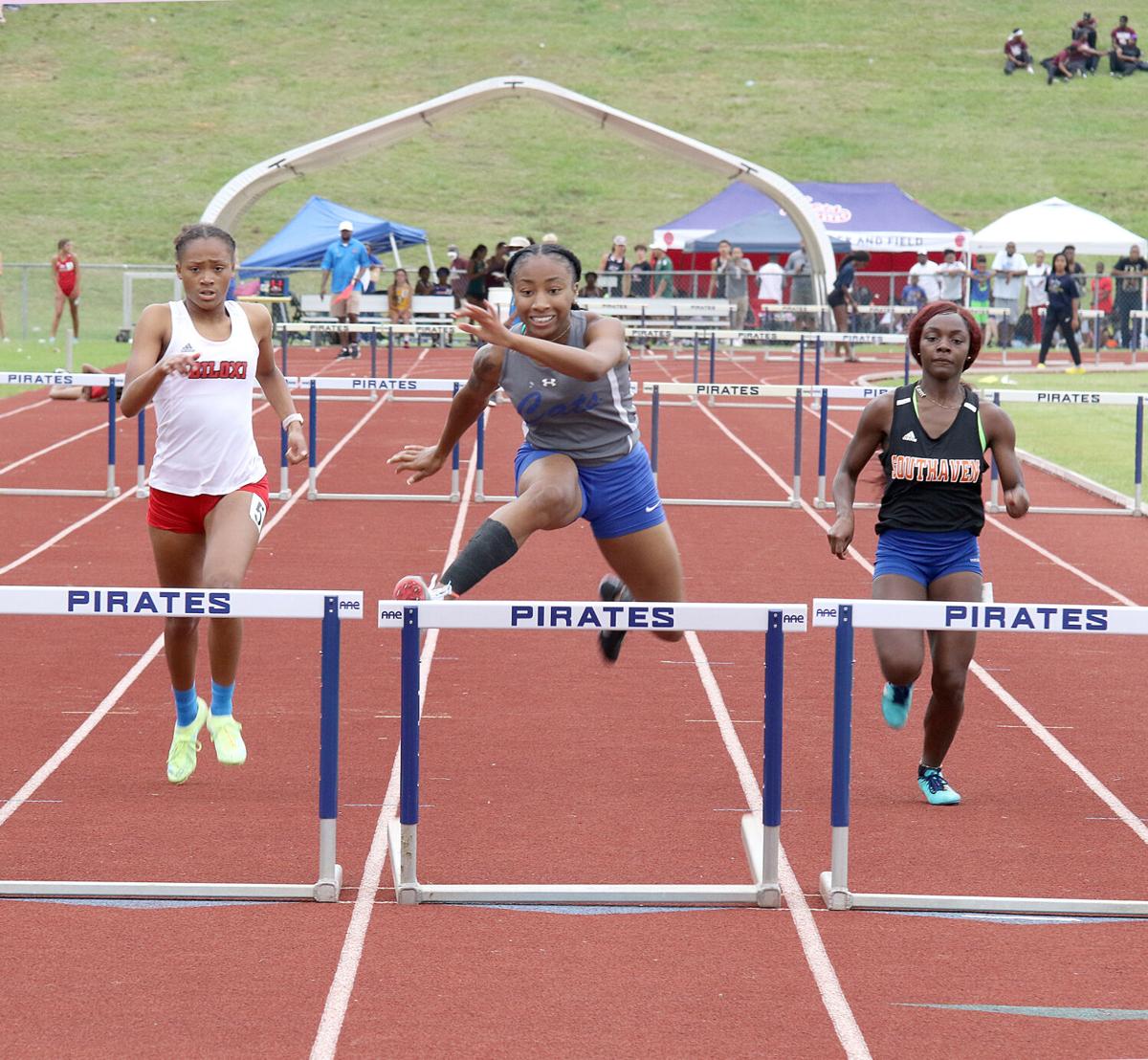 But if Vaughn drops a pass, he can always catch the next pass. As a sprinter for the MHS track team, he only gets one shot at glory.

This past weekend, Vaughn made the most of that one shot, finishing first at the MHSAA Class 6A state track meet in the 200-meter dash. On top of being a state champion, Vaughn had a time of 21.9 seconds, a MHS record.

“It feels great,” said Vaughn, who also came in second in the 100-meter dash. “I didn’t know I broke the record when it happened. Coach told me the day after.”

MHS track coach Regonal Walker said Vaughn’s state title is the result of not just hard work but an ability to rise past any difficulty.

“Jonathan reminds me of those traditional athletes we used to have at Meridian High who plays three sports,” Walker said. “He’s a real go-getter who is very competitive. He worked his tail off this season with everything I asked him to do. Any time I challenged him at practice, he rose to it, and because of that it worked out in his favor as far as him breaking the 200-meter record.”

Winning state felt good, but Vaughn said there was something even more special about being a record holder.

“To know I’m the fastest person to ever run the 200 meters at Meridian High School, that feels amazing,” Vaughn said. “It shows al my hard work paid off, and I just have to continue to get better.”

Vaughn said running the dashes is exciting because it’s considered the main event by so many people in the crowd, and the finality of the one run at each meet brings added pressure.

“In football, it’s play after play,” Vaughn explained. “In track, it’s that one time. Either you show up or you don’t. It’s really fuel for me, because you only have one chance, so you can’t mess that one chance up.”

Senior Sa’Nya McPhail also had a standout performance for MHS this past weekend, finishing second in the 300-meter hurdles. Despite only starting to compete in the hurdles this season, Walker said McPhail made a lot of progress in a short amount of time, culminating in her being a runner-up at state.

“Another level of commitment,” McPhail said. “She committed fully to cross country and track and field, and it all carried over and manifested.”

McPhail, who also competed in the 100-meter hurdles and 4X400-meter relay, said she’d been wanting to do the hurdles for several years now but Walker needed her in other events prior to this season.

“I knew I could do it, and I wanted to try something new,” McPhail said. “(Walker) knew I could, but he didn’t need me in that spot since I could bring points in other spots that others couldn’t.”

There was an adjustment period to competing in the hurdles, but McPhail said it was mostly learning the right mechanics.

“I didn’t have the correct technique at first, but I’m a fast learner,” McPhail said. “I had to improve my technique, but it wasn’t hard for me to adjust.”

Overall, McPhail said she was pleased with how her season played out, especially since she only had a few months to pick up the hurdles.

“I feel like I made a lot of progress,” McPhail said. “To make it to state my first year in the hurdles, I was proud of myself, but I wanted first. I worked too hard to place second.”

As a senior, McPhail said she was grateful to have completed her senior season after last year’s track season got cut short due to COVID-19, though she wishes she could have played out the rest of 2020.

“I probably would have done hurdles (last spring) if it wasn’t for COVID,” McPhail said. “If I had, I would have won state this year easily.”

McPhail signed with Grambling to continue her track and field career, and she said the Grambling coaches plan to make her a heptathlete.

Funeral services for Mr. Nathaniel Lynch Pringle Jr. will be Thursday, May 20, 2021, at 11 a.m., at New Prospect M.B. Church on the lawn. Interment will be in the Mississippi Veterans Cemetery in Newton. A viewing will be Wednesday, May 19, from 1-7 p.m. at Enterprise Funeral Home. Masks are…

Lucille VanScyoc Timms, 84, of Meridian, Miss., passed away on Wednesday, April 21, 2021. She was born on April 17, 1937, in Mt Olivet, Ohio to the late Neil Thomas and Elizabeth Mae (Davis) VanScyoc. Lucille was a retired legal secretary for HQ Defense Logistic Agency, Office of General Cou…