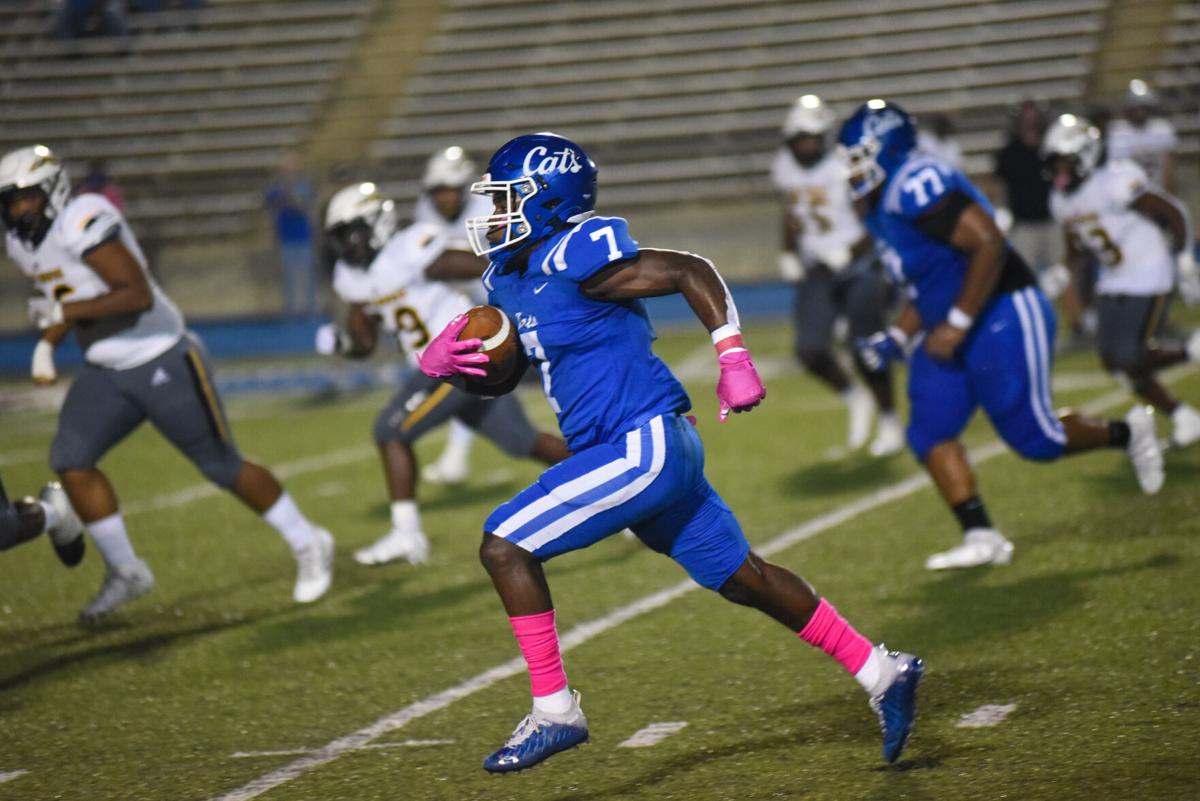 Meridian's Fernando Atterburry (7) returns an interception for a touchdown during the Wildcats' game against Oak Grove Friday, Oct. 8, 2021, at Ray Stadium. 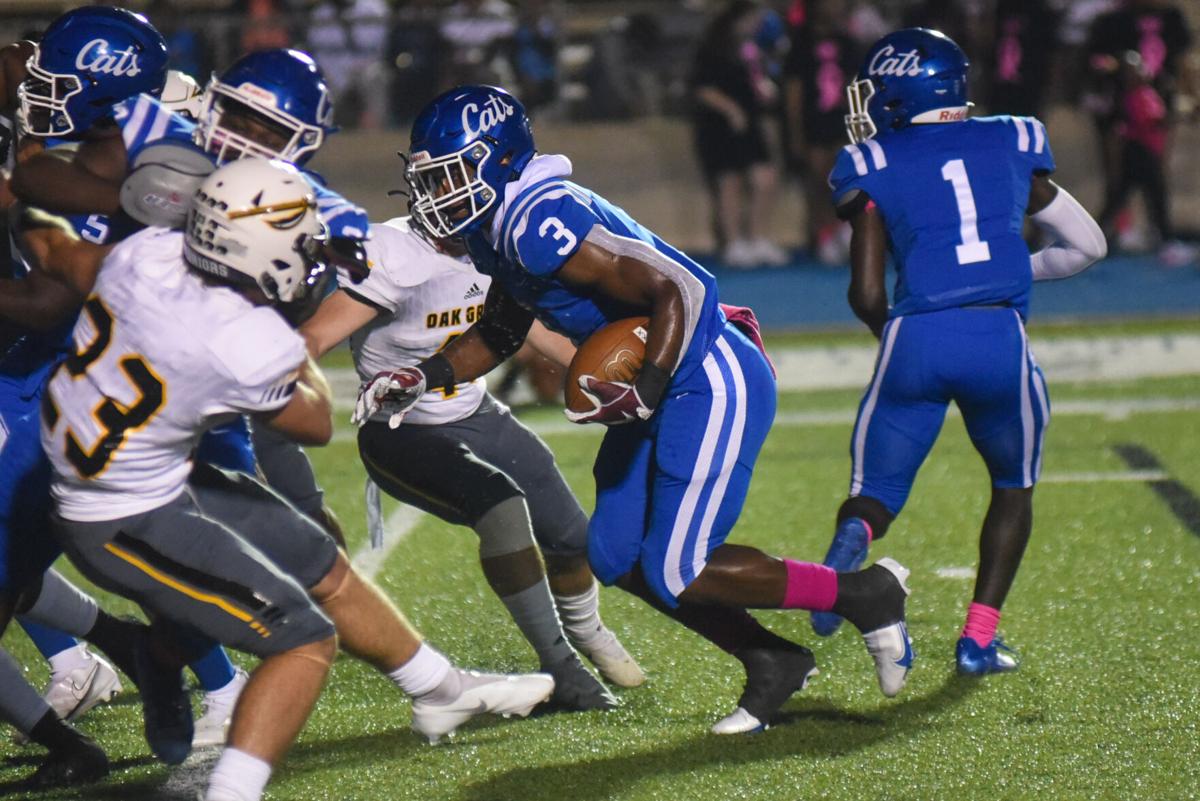 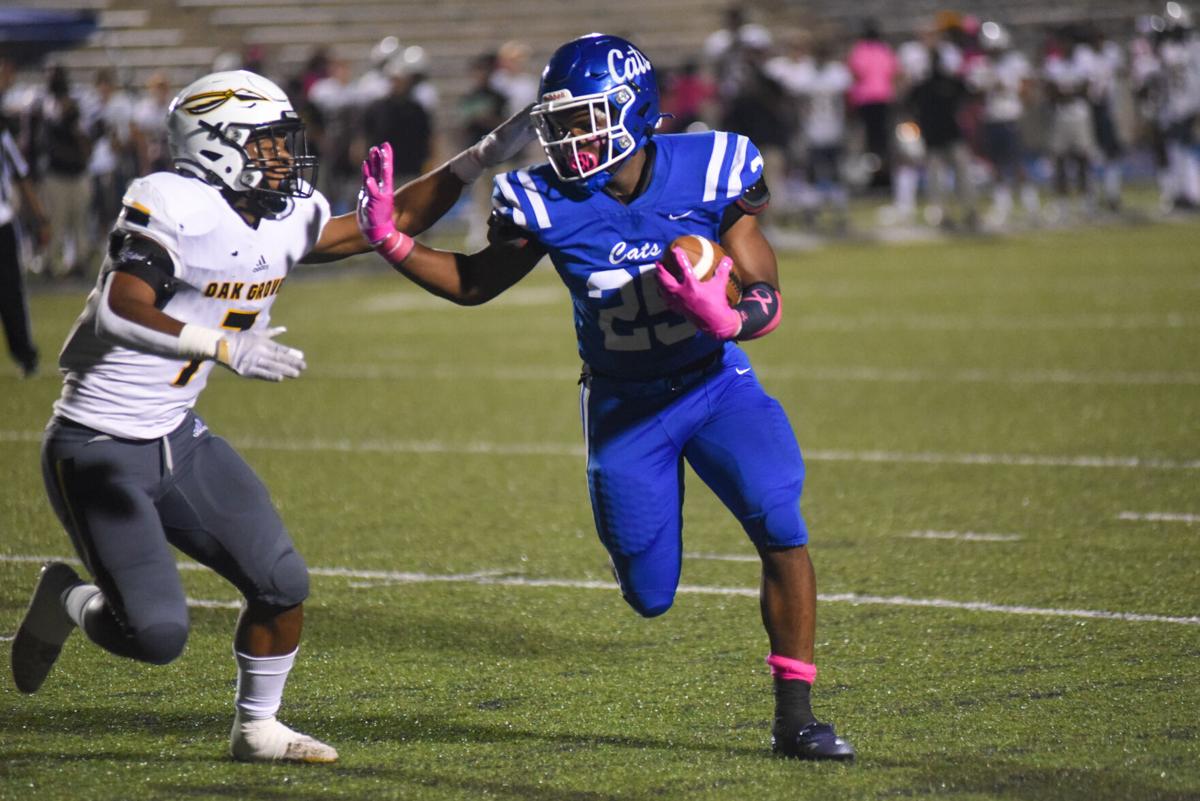 Meridian's Howard Atterberry (25) tries to make his way past an Oak Grove defender during their game Friday, Oct. 8, 2021, at Ray Stadium. 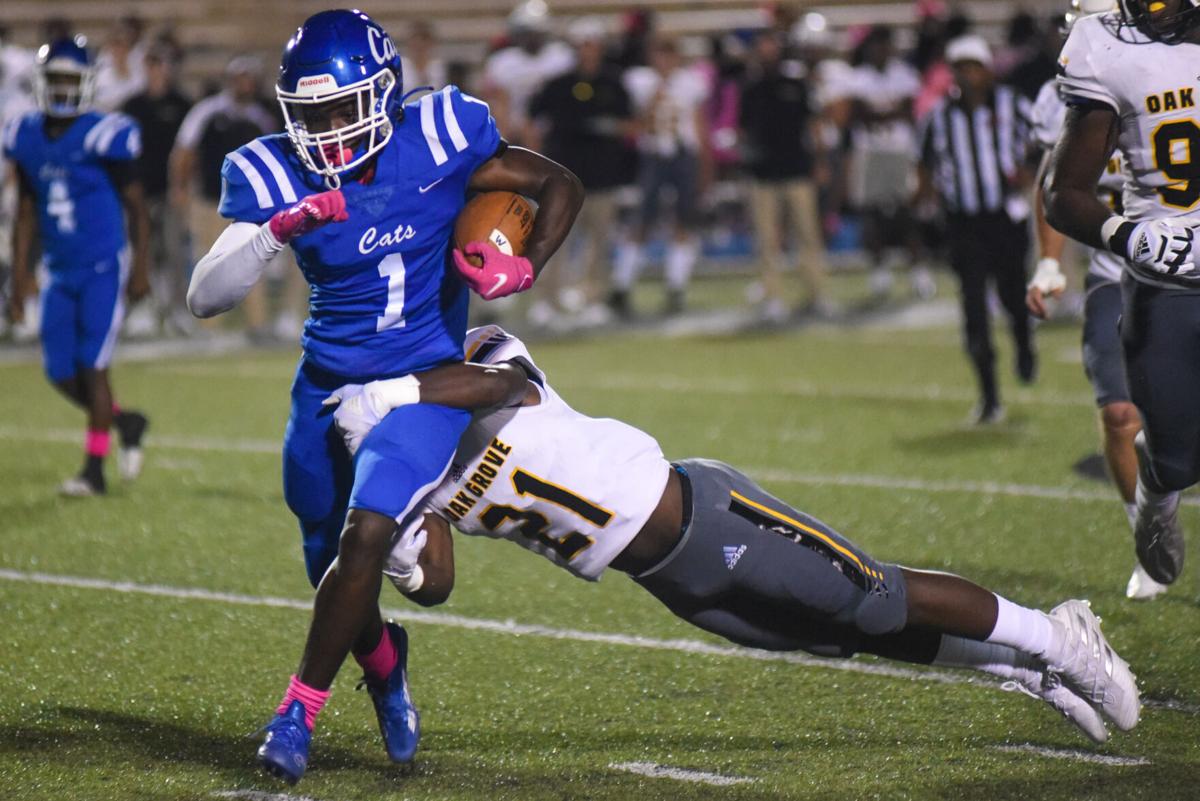 Meridian's Jonathan Vaughn (1) is caught from behind by an Oak Grove defender during their game Friday, Oct. 8, 2021, at Ray Stadium.

Meridian's Fernando Atterburry (7) returns an interception for a touchdown during the Wildcats' game against Oak Grove Friday, Oct. 8, 2021, at Ray Stadium.

Meridian's Howard Atterberry (25) tries to make his way past an Oak Grove defender during their game Friday, Oct. 8, 2021, at Ray Stadium.

Meridian's Jonathan Vaughn (1) is caught from behind by an Oak Grove defender during their game Friday, Oct. 8, 2021, at Ray Stadium.

When it looked like things would snowball for Meridian in the first quarter, the Wildcats responded well.

When things started to actually snowball in the third quarter, Meridian was unable to stop it from happening as Oak Grove scored 31 unanswered points in the second half before a late touchdown by the Wildcats cut the Warriors’ lead to 52-34. After that, Meridian was unable to muster any late-game heroics as Oak Grove came away with the 18-point win in Friday night prep football action.

Oak Grove jumped out to a 14-0 lead in just the first seven plays from scrimmage before Meridian came storming back to take a 28-14 lead deep into the second quarter. The Warriors added a touchdown late in the second to make it 28-21 at intermission, and the Wildcats felt good about their chances since they got the ball to open the third quarter.

An 85-yard touchdown run by Meridian’s Daniel Hill was called back due to a block in the back penalty on the Wildcats’ opening drive of the third quarter, and Meridian later fumbled on the drive to set up a 50-yard touchdown run by Oak Grove’s Jaquerrius Gray with 9:27 left in the quarter. It was part of a 24-point third for the Warriors aided in part by another Wildcats fumble and an interception return for a touchdown by Oak Grove, and Meridian head coach John Douglass said the mistakes made coming out of the locker room at the half against a Warriors team ranked No. 2 in the state.

“You can’t do that against good teams, and both times (we fumbled in the third) we had something going,” Douglass said. “If you turn the football over against a good football team, you’ll lose most of the time. Their touchdown right before the half to get it to a one-possession game, I told our guys if we make a tackle right there and don’t give up a touchdown and then come out and score, it’s 35-14 and everybody’s thought process changes a little bit.”

After jumping ahead 7-0 on just the third play from scrimmage, Oak Grove recovered an onside kick and made it 14-0 four plays later. But Meridian cut the lead to 14-6 with 6:02 to go in the first quarter on a 2-yard carry by Hill.

On the ensuing Oak Grove possession, Meridian’s Fernando Atterberry had an interception and ran it back 42 yards for the score. Hill’s two-point run tied the game at 14-14, and on the next Warriors possession, the Wildcats’ Demondra Scott caught an interception on the Oak Grove 36-yard line to set up a 12-yard touchdown run by Hill and make it 21-21 with 3:15 left in the first.

On the first play of the second quarter, Jonathan Vaughn scored on a 33-yard run to put his team ahead 28-14. Scott had his second interception of the game on Oak Grove’s next possession, but Meridian wouldn’t score again in the first half, and Oak Grove cut the lead to 28-21 with a 14-yard touchdown reception by Jaylen Aborom with 21 seconds to go before the half.

In the third quarter, Hill’s 85-yard touchdown run was called back by the block in the back penalty, and Meridian’s fumble on the same drive allowed Gray to tie the game 28-28 with 9:27 left in the third. Another fumble by the Wildcats set up a 26-yard touchdown catch by Oak Grove’s Tyrell Pollard, and Aborom had a 32-yard interception return for a touchdown on Meridian’s ensuing possession.

The Warriors kicked a field goal at the 5:48 mark in the third to go ahead 45-21 at the end of the third quarter, and Gray scored on a 34-yard run with nine minutes remaining in the game to round out Oak Grove’s scoring.

Hill ran 68 yards for Meridian’s final touchdown with 5:24 left to go and make it 52-34, but Oak Grove recovered the onside kick attempt and burned clock before Meridian took over on downs late in the game. The Wildcats made it to Oak Grove’s red zone but were unable to get another play off before time expired.

Hill finished with 225 yards on 24 carries, and Vaughn carried it 13 times for 144 yards. Meridian managed just 32 passing yards on the night.

Douglass said the lesson he hopes his players take away from Friday’s game was not just to clean up the turnovers that doomed them in the third quarter, but to also realize that without those, it’s a competitive game against a top-ranked opponent.

“I’m trying to relay to my team that they stood in there and fought against one of the best teams in 6A,” Douglass said. “That’s a good thing to know about yourself, and that’s what I told them, that they can play with some of the best teams in the league. I firmly believe if we keep working and pushing, and we stay together and stay healthy, we’ll play for something meaningful here in November, and that’s our goal.”