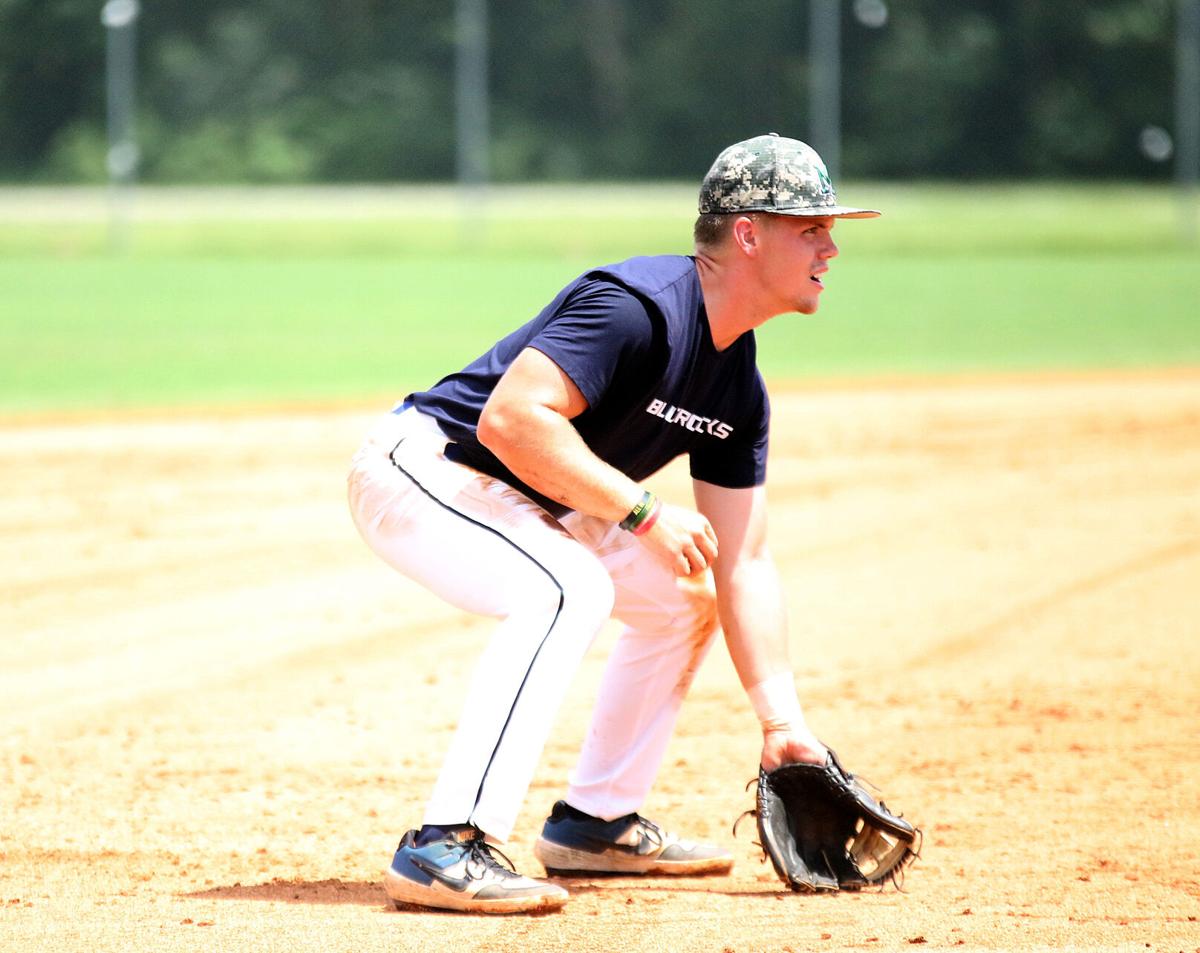 The Blue Rocks’ Bo Gatlin readies for a ground ball at third base during his team’s Honor The Game Wood Bat League contest Thursday afternoon at Q.V. Sykes Park. Gatlin plans to play baseball at Meridian Community College next spring. 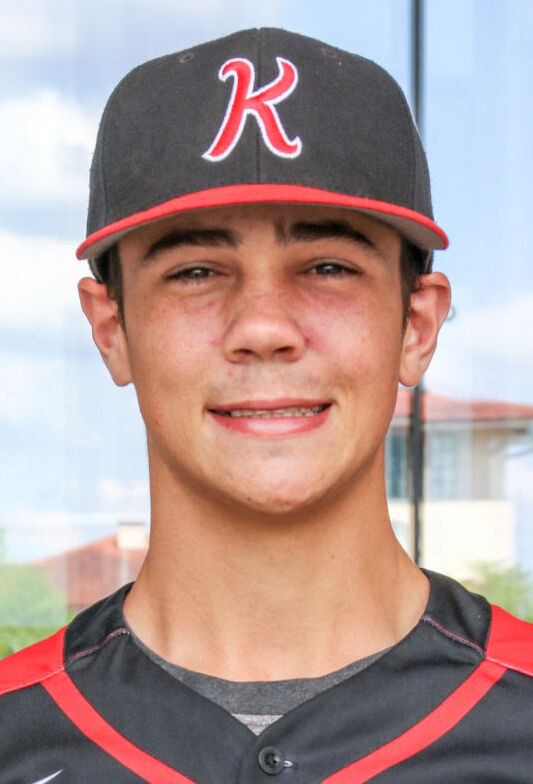 Bo Gatlin took the field Thursday sporting a different-colored jersey than his teammates.

While eight members of the Blue Rocks took their positions wearing powder blue uniforms, the Meridian Community College freshman jogged over to shortstop in navy blue.

He had been traded.

At the Honor the Game Wood Bat League, exchanges like this are common. Created by East Coast Sox, a baseball organization based in Columbus that provides coaching and clinics to youth players, the summer league has provided an opportunity for college players to train through live games after having their spring seasons shut down due to the COVID-19 pandemic.

In Gatlin’s case, he started the seven-week season on a different squad — one of four in the league — and ended up on the Blue Rocks to see more time at the plate and in the infield.

“I’m just happy to be out here, with the season getting canceled,” Gatlin said. “I didn’t think I’d be able to play summer ball, so I’m just grateful to be out here to play some baseball, the game I love, with some good guys.”

Gatlin, a 5-foot-11 Oxford native, began his college days at Southeastern Louisiana but transferred to MCC after not seeing any action in the 16 games the Lions played before their season was canceled and the NCAA announced spring student-athletes would not be docked a year of eligibility.

He’s taking on some stiff competition as well, as the league is heavily composed of Division I players from the Southeastern Conference. In addition to five Mississippi State baseball players participating in the league, 63 Division I student-athletes, including 25 from the SEC, are also participating, according to East Coast Sox President Greg Sykes, as well as 18 players originally slated to take part in the Cape Cod Baseball League, which was canceled in April.

According to Eric Dubose, vice president of East Coast Sox who helps run the Honor the Game Wood Bat League, Gatlin was able to switch teams so smoothly because the group is less focused on wins and losses and is more concentrated on getting players the innings they missed.

Each team has played a doubleheader on Mondays and Thursdays since the league began — with Q.V. Sykes Park serving as the exclusive location for the Meridian division — and a postseason tournament scheduled for next week will crown a champion.

The competition has also become a place where a batch of MLB scouts have amassed, with some days seeing more than 20 visiting the park. It’s provided an avenue for pro baseball clubs to observe potential prospects, Dubose said, and for those potential prospects to showcase their skills.

“The scouts are loving it. They’re able to come out here, be in the dugouts with these guys, be around them and see what kind of kids they are, how they’re personalities are,” he said. “We’re able to put some of these (players) in positions they may not play in their college seasons that these scouts would like to see if they can pull it off.”

Gatlin, for instance, started Thursday's opening matchup in shortstop before shifting to third base by the second inning. He then found himself at second base until he returned to shortstop for the remainder of the contest.

Former West Lauderdale standout Ben Ethridge, whose 3-0 record, 2.29 ERA and team-high 26 strikeouts earned him Freshman All-America honors in his abbreviated first season at Southern Miss, said he’s been using the summer league to improve his speed and keep his fastball in shape. He’s had mixed results throwing to some of the best college batters in the region but has welcomed every opportunity to face off with them.

“It’s definitely interesting because sometimes they’ll overpower you and then other times you’ll overpower them, but most of the time it’s great competition,” the 6-foot-1, Collinsville native said. “So either way you’re going to get people who get good at-bats.”

Dubose said he believes the Honor the Game Wood Bat League can continue beyond 2020 as it will continue to be an outlet for players.

“It’s just a way for them to be able to stay on a college campus, work with their strength coach and work with their college coaches, and then come down here and get some innings in,” he said. “So I think it’s something that we’ll be able to continue on even after this year.”

Gatlin said his anticipation for playing this coming school year has grown because of it.

“It gets me ready. It gets me excited,” he said. “Sitting around, you start getting lazy and you start not wanting to work out, but I’m getting ready to play and look forward to the fall.”