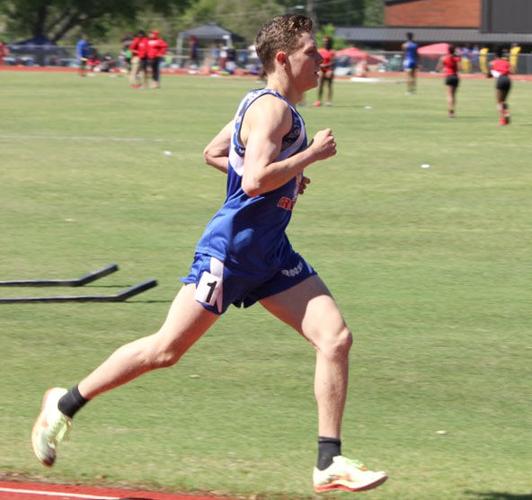 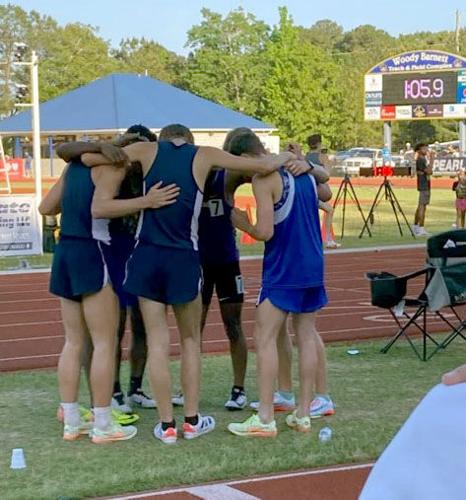 Neshoba Central graduate Jackson Stroud also ran track and field, and he’s pictured here praying with teammates prior to an event this past spring. Stroud hopes to one day be a chaplain in the U.S. Army.

Neshoba Central graduate Jackson Stroud took up cross country during his junior year at the school, then hired a running coach prior to his senior cross country season in fall 2021.

The signs were already there he would excel as a senior, as Stroud finished No. 1 in the State Games of Mississippi’s 2021 5K Road Race with a time of 17:56.9 — more than a full minute faster than last summer’s second-place finisher.

“He just blossomed and took off, and then by his senior year he was winning competitions and pretty much coming in first and second in everything he did,” said his mother, Lee Ann Stroud.

Jackson Stroud capped off his high school cross country career with a ninth-place finish at the MHSAA Class 5A state with a time of 17:26.4. Because of his strong showing throughout the fall, Stroud was named the 2021 Premier Preps Cross Country Male Athlete of the Year.

After graduating high school, Stroud joined the U.S. Army Reserve and is currently at Fort Jackson in Columbia, S.C., undergoing basic training, so he was unavailable for comment. Lee Ann Stroud, however, said her son will be honored to hear the news.

Lee Ann Stroud described her son as someone who marches to the beat of his own drum, and running was both a way to relax and also interact with people and practice his Christian faith.

“It clears his mind, and he prays while he runs,” Lee Ann Stroud said. “He also stops to talk to people when he runs.”

After working with a running coach, Lee Ann Stroud said it was wonderful to see her son dramatically improve at the sport.

“We were just amazed at his progress, and it was awesome to see,” Lee Ann Stroud said.

In addition to cross country, Jackson Stroud competed in track and field in the spring, and he was an all-A student his senior year. He also participated in the JROTC program at Neshoba Central, which sparked an interest in going into the Army after high school.

“One thing I really appreciate is that he wanted to go to college without student loans and without his parents’ help, and he was bound and determined to do that,” Lee Ann Stroud said.

“His recruiter and his JROTC instructor at school both told him not to let them know what he’s got,” Lee Ann Stroud said with a laugh. “They said he’d have to hold back a little or they’d kill him.”

Jackson Stroud often led Bible studies on the weekend, and his long-term goal after doing his required six-year term in the Army is to fully enlist and become an Army chaplain.