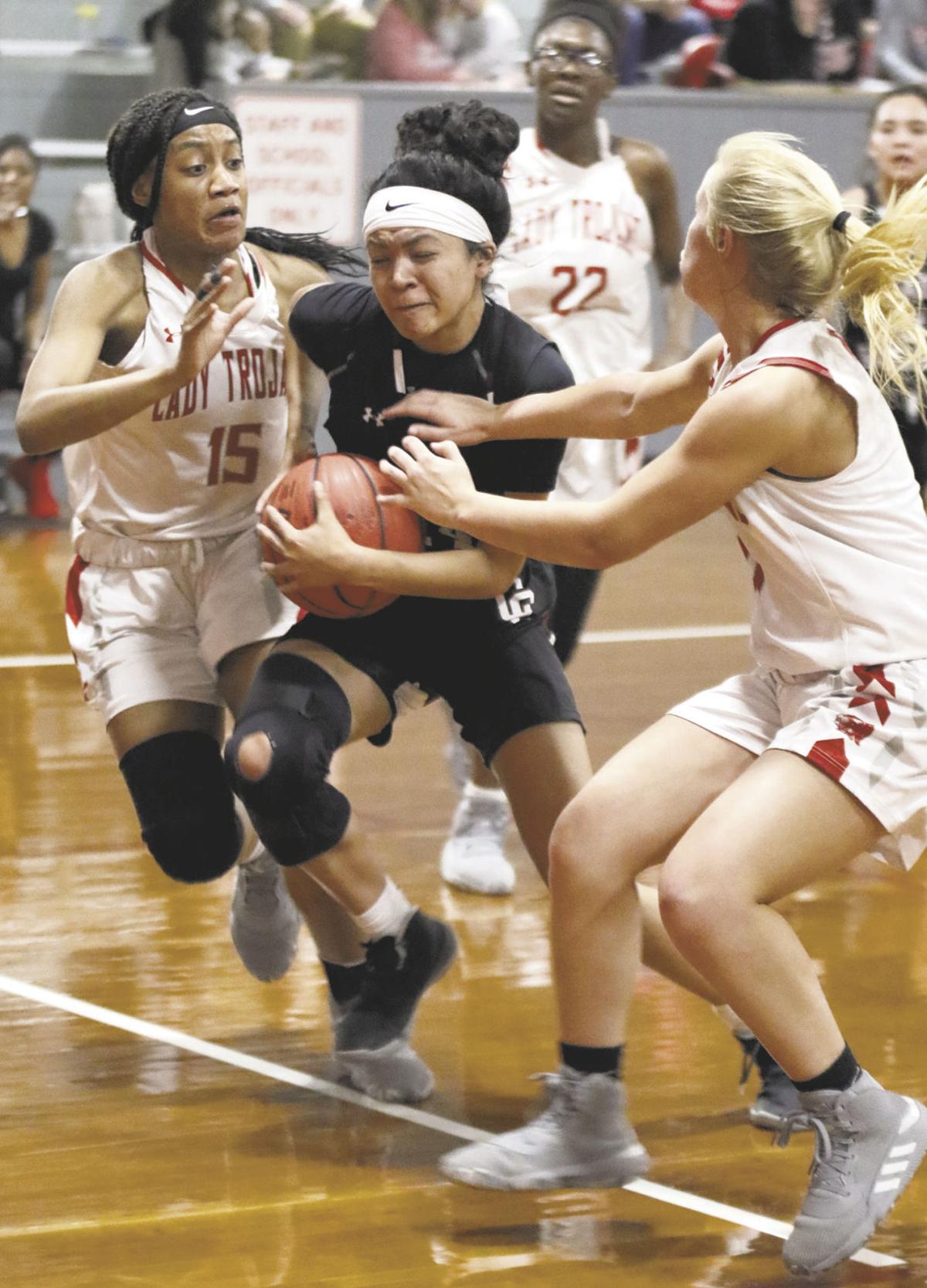 Northeast Lauderdale’s Tamorrea Marsh (15) and Molly Moore try to cut off Choctaw Central’s Meloney Thames as she drives to the basket Thursday night. 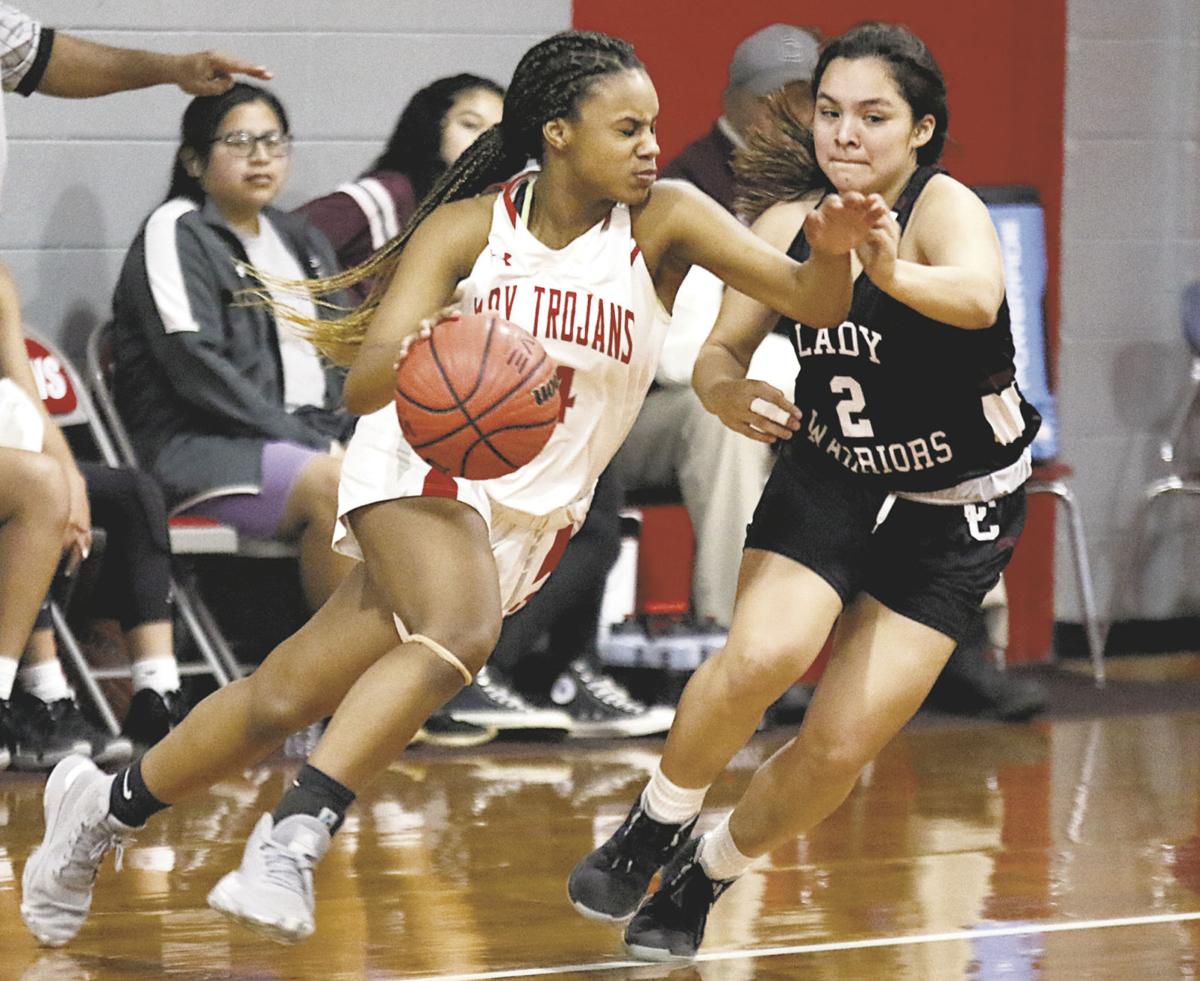 Northeast Lauderdale’s Tamorrea Marsh (15) and Molly Moore try to cut off Choctaw Central’s Meloney Thames as she drives to the basket Thursday night.

The Choctaw Central girls had to withstand Northeast Lauderdale’s best effort in Thursday’s Region 4-4A Tournament semifinal matchup at Northeast.

The Lady Trojans jumped out to a 14-9 lead after one quarter of play, and Northeast maintained its intensity to take a 27-22 advantage into the half. Lady Warriors head coach Bill Smith challenged his girls to match Northeast’s intensity, and a 23-point third quarter put Choctaw Central on top 45-37 at the end of three.

Northeast cut the lead to 45-41 with 6:01 remaining but failed to score after that as the Lady Warriors scored seven unanswered points to take a 52-41 win and advance to Friday’s Region 4-4A championship game.

“We didn’t come out ready to play, and Northeast came out and got after us and outplayed us in the first half,” Lady Warriors head coach Bill Smith said. “We had to do something because we didn’t play with much effort in the first half. I just told them at halftime that we’re in the playoffs, and if they want to continue to go on, they’re going to have to play a lot harder. Fortunately, we were able to get a few steals that kind of got us going, and we were able to hang on there at the end.”

Junior guard Meloney Thames was more descriptive about her coach’s halftime speech, and she said the players responded well after being challenged.

“He really got onto us,” Thames said. “He told us that they were ready to play, and we weren’t. We came out thinking we were going to win because we beat them twice already. He told us it was up to us, and we came out in the (second) half and started scoring. We didn’t get up like we wanted to, but we ended up getting the win.”

In both of Northeast’s regular-season losses to Choctaw Central, Lady Trojans head coach Lewis Lightsey said beating the Lady Warriors’ press was a major struggle for his girls. Northeast handled their press about as well as could be expected Thursday and also had a lot of success with offensive rebounds, which helped the Lady Trojans jump out to a five-point lead after the first quarter.

“We answered the bell to start with and definitely (played with) a lot of energy,” Lightsey said. “We challenged them yesterday in practice and today in walkthrough to have a lot of energy and to play hard at home, and I thought the other thing we did was play a little smarter. We handled their pressure today a lot better than the other two games we played them. I thought the other key was that we were able to hurt them inside and get some offensive rebounds and score some baskets in the paint, and that really worked to our advantage early in the game.”

A 3-point basket by Lyleania Johnson cut Northeast’s lead to 25-22 with 11 seconds left before the half, but a field goal by Trinity Anderson as time expired put the Lady Trojans ahead 27-22 going into the break. After a 3-point play by Mercedez Blanks to begin the third quarter, Choctaw Central went on a 19-2 run before Northeast’s Tamorrea Marsh had one of two free throws with 2:47 left in the frame. Each team scored four more points in the third, and Choctaw Central took an eight-point lead into the final period.

Back-to-back field goals by Blanks and Marsh cut the lead to 45-41, but Thames’ 3-pointer with 4:24 remaining made it 48-41, and the Lady Trojans were too tired after that to mount a comeback effort as the Lady Warriors took control in the final four minutes of play.

“It’s 45-41, and then (Thames) hits about a 28-footer at the top of the circle, and our kids kind of dropped their heads, and I called time out and said, ‘Hey, stay with it, stay in it,’ but we were exhausted,” Lightsey said. “We gave everything we had. I told them in the locker room that we’re not disappointed with them. They gave great effort. I would have been more excited if we had won, but I don’t think I could have been prouder of them if we won.”

Thames led the Lady Warriors with 20 points, and Kyla Farmer and Shantashia John each chipped in with nine points for Choctaw Central. The Lady Warriors hit just four 3-pointers, and Thames said Farmer’s presence inside — she scored six of her nine points in the paint during their third-quarter run — was a big help for Choctaw Central when shots weren’t falling from beyond the arc.

“Throwing the ball on the sides to our post really helped because we knew they couldn’t guard our post,” Thames said. “(Farmer) came in doing what we wanted.”

“You just have to give Choctaw credit, they made a lot of shots in the second half, and they have the heart of a champion,” Lightsey said. “They’re not going to stop playing. I thought we improved a lot this week in these last two games, and we just have to keep that moving forward.”