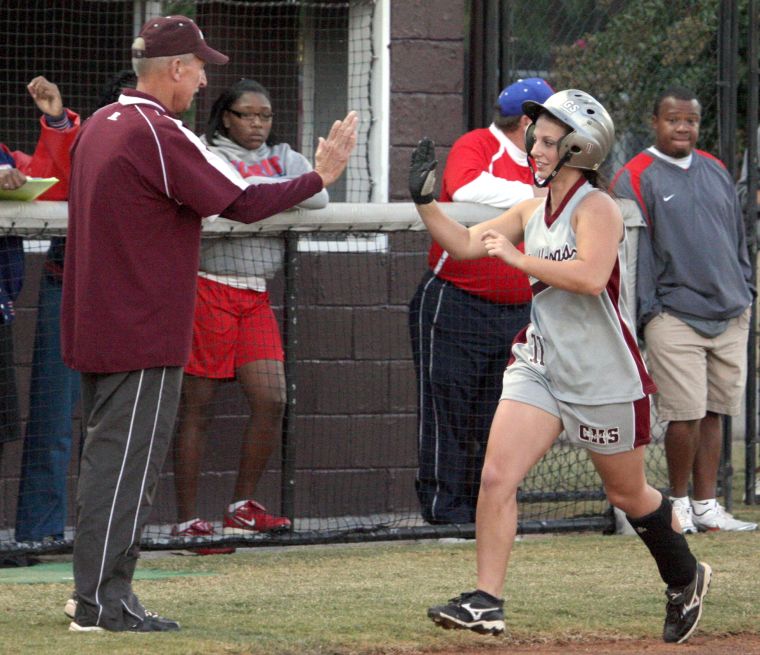 Clarkdale's Amber Spann gets a high-five from Head Coach Rick Roberson Tuesday night as she rounds third base on her third consecutive home run in the second game of the night against Forest. 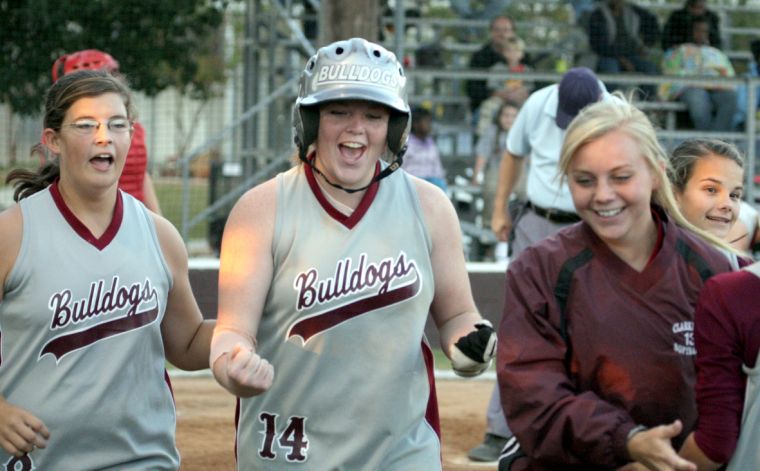 Clarkdale's Amber Spann gets a high-five from Head Coach Rick Roberson Tuesday night as she rounds third base on her third consecutive home run in the second game of the night against Forest.

High school softball's ‘second season’ began with a bang Tuesday night with the Clarkdale Bulldogs hosting the Forest Bearcats in the opening round of Class 2A action. Coach Rick Roberson's Lady Bulldogs flexed their muscles and demonstrated why they are annual contenders for the crown. The Bulldogs outhit their counterparts 44-4 in two games and defeated Forest 24-0 in the first game, and 19-2 in the second game.

"I told my girls to not worry about who we were playing," said Roberson. "We must play to our own standards."

His girls responded to his request in a big way.

The Bulldogs batted around twice and scored twenty runs in the first inning of game one. Lauren Thrash supplied the power as she remarkably blasted two three-run homeruns in the bottom half of the first. Sarah Harris had a huge first inning as well driving in three runs with two singles. Amber Spann and Lindsay Beard also collected two-run hits apiece to cap off the incredible first inning.

The Bulldogs added a few more runs in the second when Logan Bozeman drove in a run with a single, and a couple of errors led to two more runs. Thrash added one more RBI with a single, making the score 24-0. Great defense from Clarkdale preserved the game one shutout.

The Bulldogs picked up where they left off in game two.

Amber Spann was not going to let Lauren Thrash outperform her from the first game. Spann kept the hit parade going in the second game when she follwed a Sarah Harris leadoff single with a two-run bomb, but she wouldn't be done. Later in the frame, Abby Roberts hit a two-run homerun of her own.

The second inning began exactly like the first. Harris led off with a single up the middle and it was Spann who followed with an absolutely towering blast, her second two-run homerun of the game. Kennedy Castleberry had a great game two of her own. After an RBI single in the first, she delivered a huge bases loaded triple that cleared the bases in the second inning. However, Spann stole the show. In her third at bat she jacked another over the left field fence, ending a stellar offensive clinic put on by her and the rest of the Lady Bulldogs. Forest tried to claw back scoring two runs in the third, but the Bearcats couldn't avoid the run rule and lost 19-2.

"All that's important in the first round is to get those two wins and keep rolling," said Roberson.

The Bulldogs will roll on to face either Franklin County or St. Patrick's Saturday.