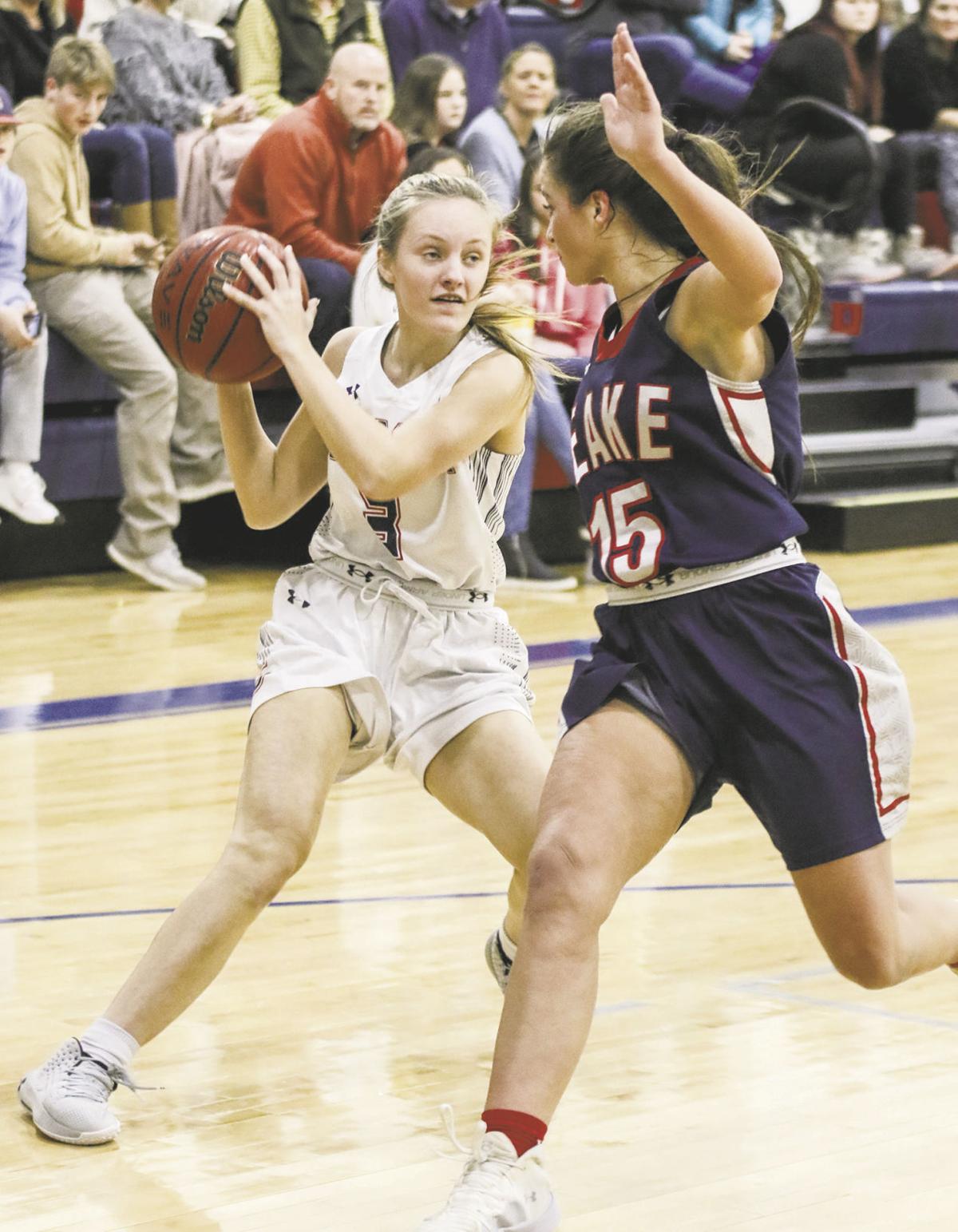 Lamar’s Reece Shaffer slams on the breaks as she tries to evade a Leake Academy defender Friday night. 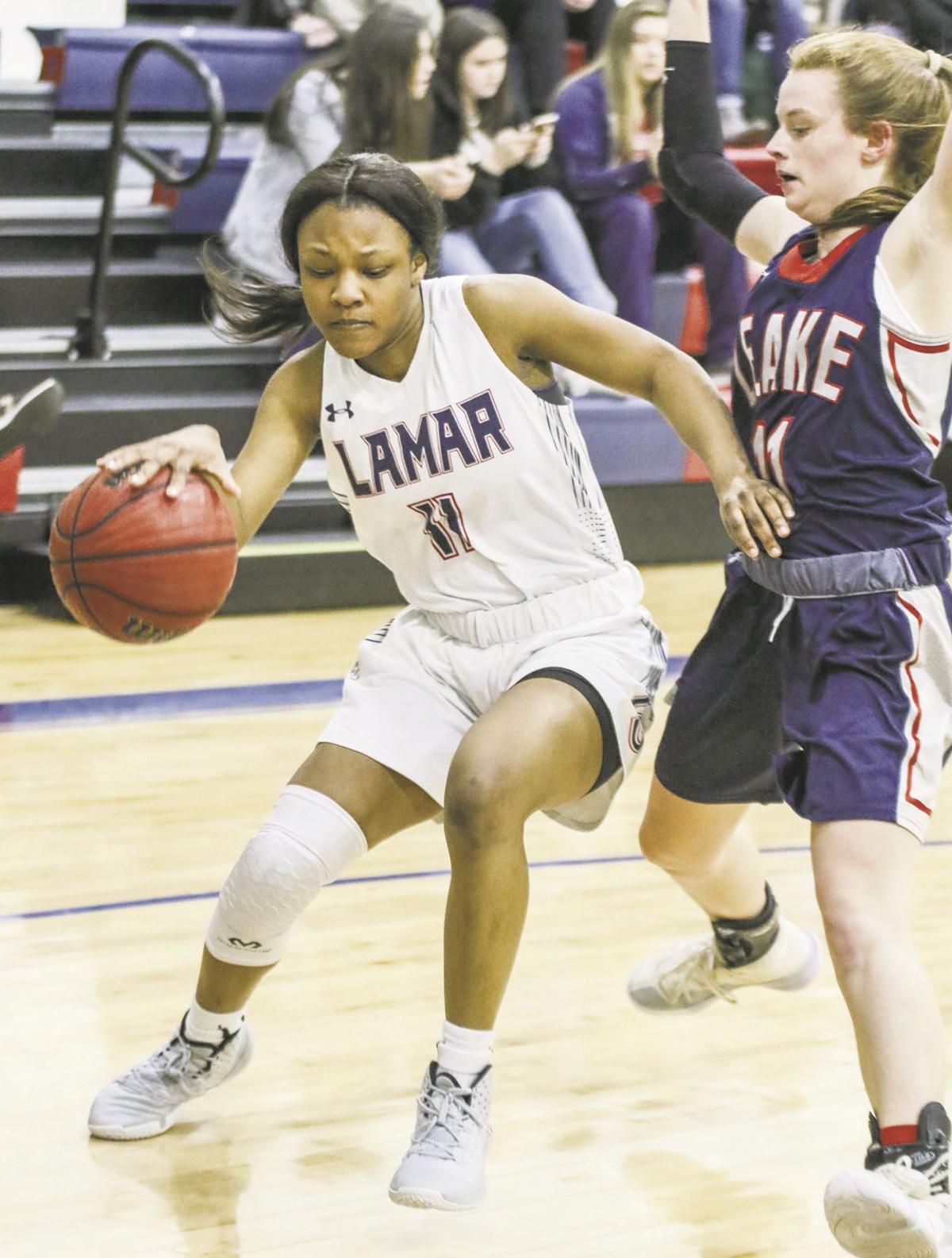 Lamar's Skylar Norman fights to get around a Leake Academy defender Thursday night.

Back-to-back 3-pointers by the Lamar boys basketball team cut a 16-point halftime deficit down to four at the end of the third quarter.

But after scoring just four points in the third period, Starkville Academy regained its footing and put up 21 points in fourth to fend off the host Raiders’ comeback attempt for a 51-42 victory in the MAIS District 2-4A semifinals Thursday night.

“We didn’t handle the moment of the game to start with, and I preach to them every day effort and energy. In the second half, we had a lot better effort and energy than we did in the first half,” Lamar head coach Steve Nelson said. “I’m proud of the kids for battling back to within four to start the fourth quarter. We battled and we played, and I’m proud of that, but we’ve got to start off better.”

Collins Pollock led the Raiders with nine points off three made shots from the perimeter. Jacob Partridge had eight points and four assists, and Will Morris chipped in seven points. Ross Polizzi also hauled in 15 rebounds along with five points.

Early ball handling miscues by Lamar helped fuel 16-0 run by the Starkville Academy through the first and second quarters to grab an 18-2 lead with 6:18 to play in the opening half. A layup by the Volunteers through a foul gave them their largest lead of the game at 26-9 with three minutes left before halftime. The Raiders made just four shots from the floor through the first 16 minutes and trailed 26-10 at intermission.

“We had entirely too many turnovers in the first half,” Nelson said. “Probably had more turnovers than we even had shots at goal, and we just didn’t respond. Dug ourselves a hole.”

Five straight points from Thad Ransier, including a 3-point play, to make it an 11-point contest began the third quarter and Lamar’s comeback run. Josh Bakane went 2-for-2 at the free-throw line to bring the Raiders’ deficit to single digits before Pollock hit his squad’s first 3 of the evening to make it 26-20 with 3:34 to play in the third.

After Starkville Academy stretched its lead back out 10, Polizzi and Morris nailed consecutive shots from beyond the arc to make it a four-point game heading into the final frame.

The Volunteers were outscored 16-4 in the third but got its offense working again and held onto its lead, eventually extending it to 10 again midway through the fourth quarter. Pollock later drilled 3-pointers on back-to-back possessions to close the gap once again and make it a 46-40 game with 1:05 left, but five free throws for Starkville Academy sealed the win.

“When we’re down 16 at half and we outscore them by 12 in just the third quarter,” Nelson said. “We might’ve been a little bit spent until we got our second wind again.”

Jawon Yarbrough had a game-high 16 points for Starkville Academy and added six rebounds and four steals. Randall Futral and George Delp each tallied nine points. The Volunteers will play Heritage Academy Saturday for the district championship.

The Lamar girls basketball team fell to Leake Academy in the MAIS District 2-4A tournament in a 31-point loss Thursday in the semifinals.

“Nobody in our division has played Leake within 30 (points). They’re just above everybody else,” Lady Raiders head coach Joe Miller said. “I feel like the kids have come a long way. We played really hard, we were just outmanned tonight.”

Erica Smith and Sarah Dudley Reed tallied four points each for Lamar, which will play Heritage Academy in the district consolation game Saturday.