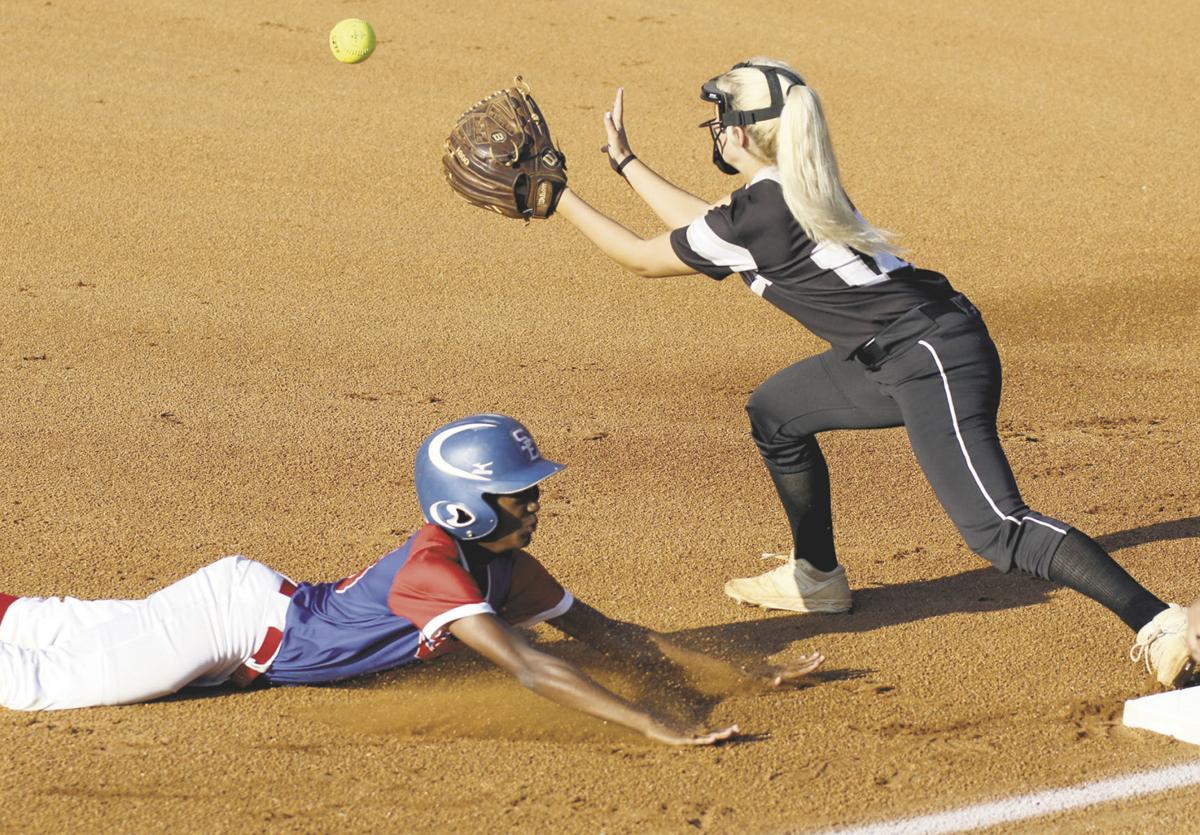 Southeast Lauderdale’s Shakira Wilson slides in safe ahead of the ball at third against Enterprise’s Anna Claire Brewer Tuesday during the second round of playoffs. 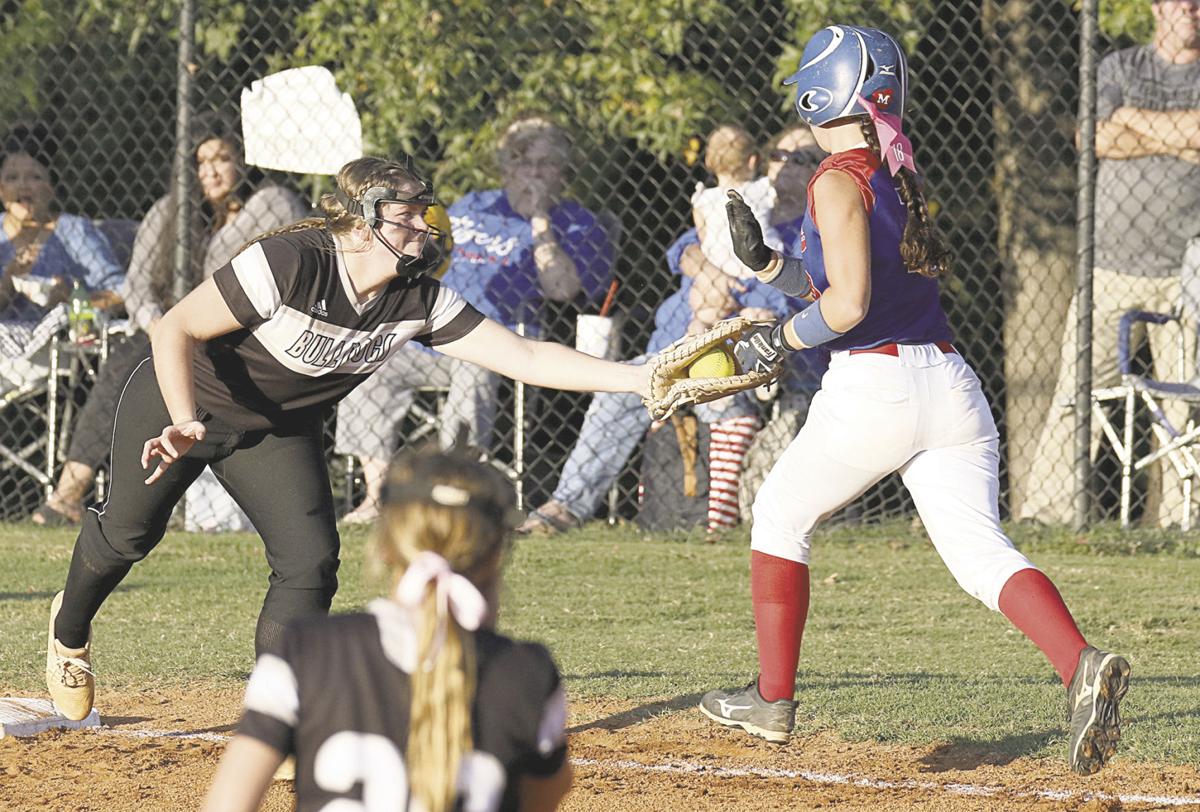 Enterprise’s Emma Hill is pulled off the bag as she tags out Southeast Lauderdale’s Hannah Carney Tuesday night during the second round of playoffs. 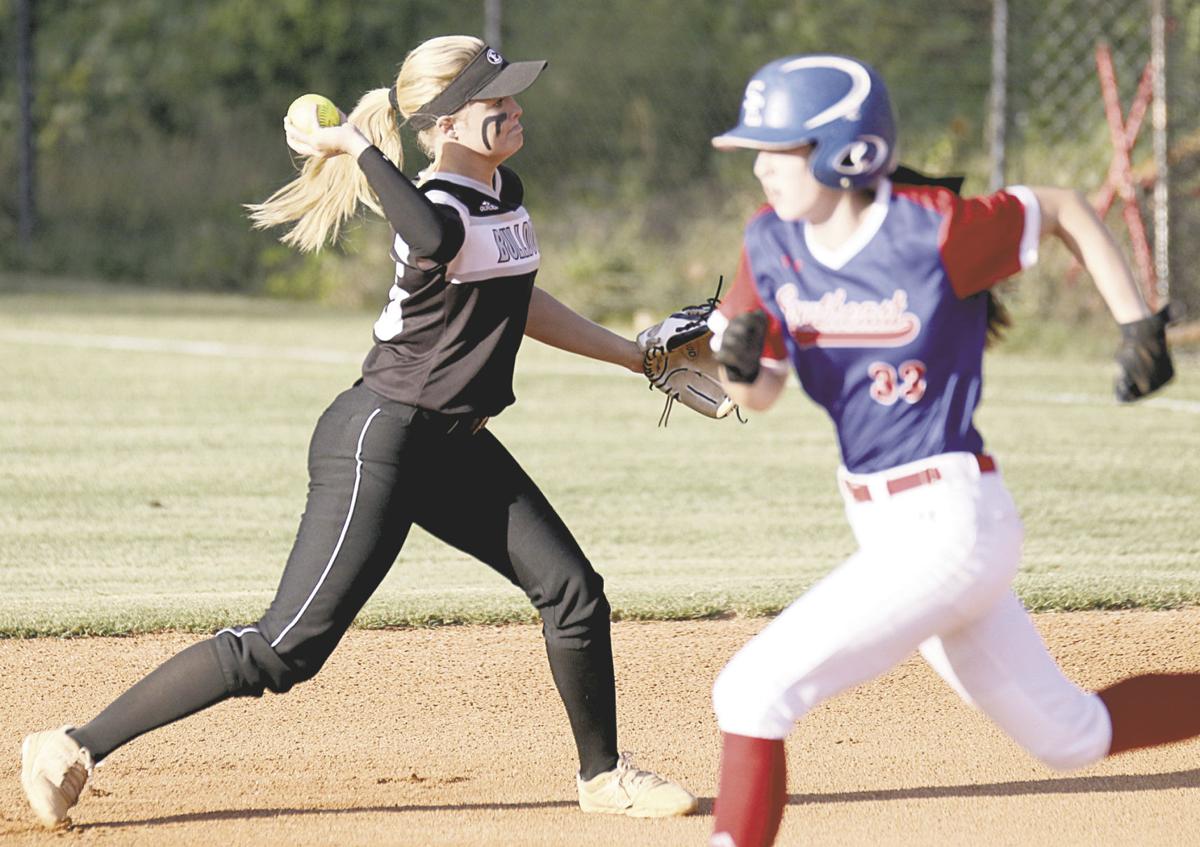 Enterprise’s Faith Guy makes the throw over to first base for an out against Southeast Lauderdale Tuesday during the second round of playoffs.

Southeast Lauderdale’s Shakira Wilson slides in safe ahead of the ball at third against Enterprise’s Anna Claire Brewer Tuesday during the second round of playoffs.

Enterprise’s Emma Hill is pulled off the bag as she tags out Southeast Lauderdale’s Hannah Carney Tuesday night during the second round of playoffs.

Enterprise’s Faith Guy makes the throw over to first base for an out against Southeast Lauderdale Tuesday during the second round of playoffs.

And with a laced hit, straight into the glove of third baseman Rileigh Marlow for the final out of the game, the Lady Tigers swept the Lady Bulldogs, 13-8 and 3-1, to advance to the Class I quarterfinals.

In Game 1, The Lady Tigers got their bats going early, scoring six runs in the second inning and eight over the first two. Featured in the bottom of the lineup, Katie Moulds, Marlow, Akira Causey and Alexis Wilson picked up consecutive hits before leadoff batter Shakira Wilson knocked in an RBI double for one of seven hits in the second frame. Hannah Carney’s hit a few batters later also drove in a run.

Southeast was then held scoreless for the next two innings as Enterprise chipped into its deficit and got within three runs. Haley Stockman, Mattie Herrington and Faith Guy earned RBI singles for three runs in the third, and Emma Hill sent home Chloe Litchfield in the fourth before scoring herself.

Marlow then loaded the bases for the Lady Tigers in the fifth on a single before Causey and Akira Wilson drove in runs. Shakira Wilson hit a two-RBI single into left field to put her team back up by seven. Southeast added another run in the sixth.

“It was a big inning,” Shakira Wilson said of the fifth. “We needed to keep the game up and not let them get back into the game.”

The Lady Bulldogs cut back into that lead with two runs in the bottom of the fifth and loaded the bases in the seventh but managed only one run in their 13-8, first loss of the evening. Stockton, Herrington and Catherine Stroud each tallied two of Enterprise’s 14 hits. Herrington also had two RBIs and a run, and Stroud added two runs.

“We gave them two big innings in that game, but we chipped away all game, and I’m proud of that,” Enterprise head coach John Welch said.

For Southeast, which struck for 20 hits, five different batters had multi-hit performances. Causey and Shakira Wilson each finished with three hits, three RBIs and two runs. Moulds and Marlow also had three hits and two runs.

The bats went away in Game 2 as only 13 hits were recorded between both teams. In the first inning, Stroud’s sacrifice fly drove in Stockman, who led off the contest with a walk, for the Lady Bulldogs’ only run. The Lady Tigers responded with two in the bottom half of the inning when Shakira Wilson was sent home from second base after getting a double, and Emmy Williams’ double sent home Taylor Williams. Shakira Wilson’s RBI single in the second inning gave Southeast a 3-1 lead, which is where it remained for the final five innings.

“(We won) through determination and being tough,” Harper said. “You’ve got to give Enterprise credit, we pressed them hard right off the bat and they never quit, and I didn’t expect they would quit.”

In addition to playing error-free ball, the Lady Tigers also held Enterprise to six hits. At the plate, Shakira Wilson went 2-for-3 with one run and one RBI as her team’s only multi-hit batter of Game 2, and she had her team’s only extra-base hit. Marlow, Akira Wilson and Lauren Pickett each had one of Southeast’s seven hits.

Stroud finished 2-for-3 with an RBI for the Lady Bulldogs. Herrington, Guy, Anna Claire Brewer and Kate Brannan all earned a hit. Enterprise committed only one error in the field.

Southeast will play Bogue Chitto Thursday for a spot in the semifinals.