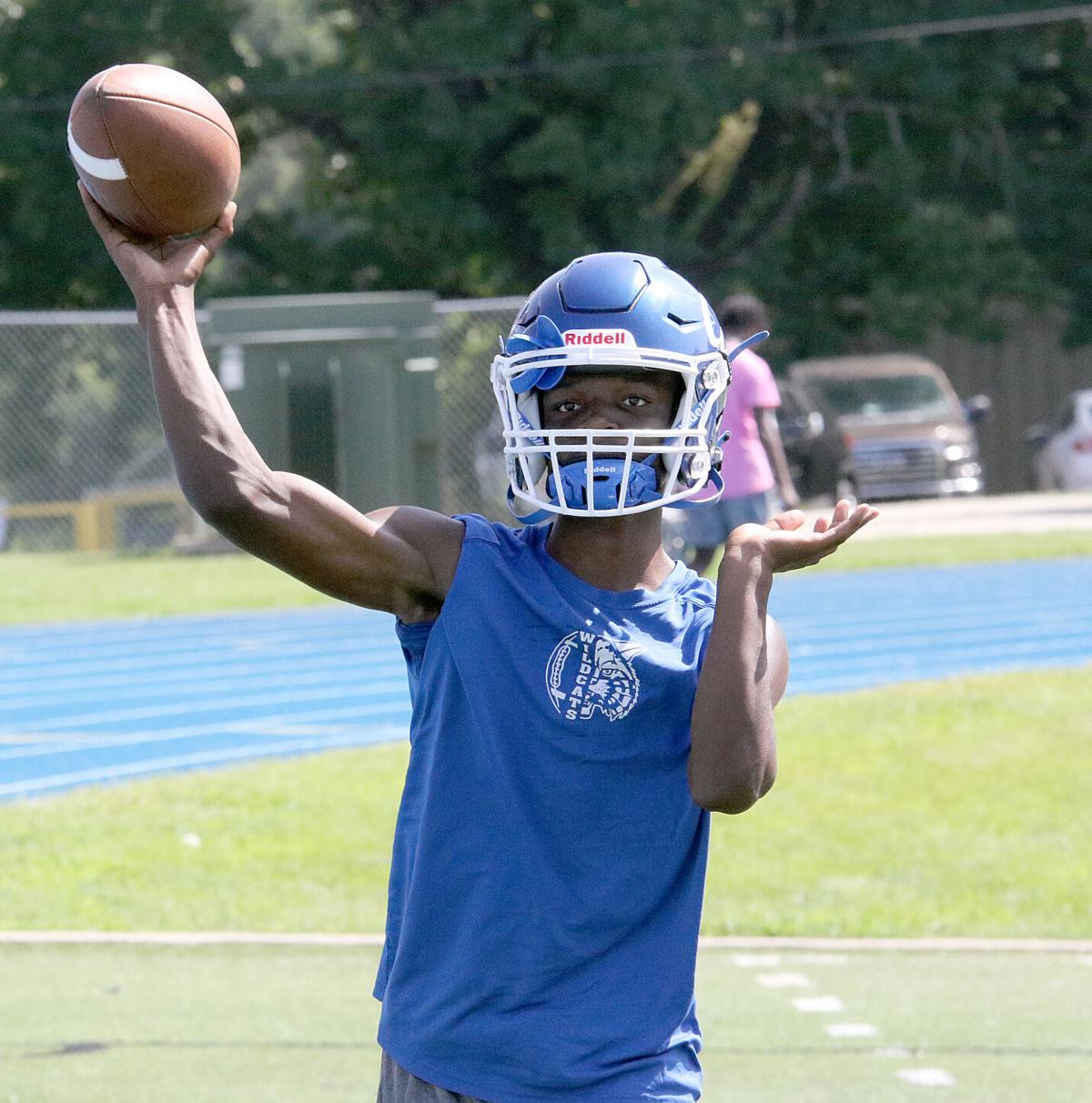 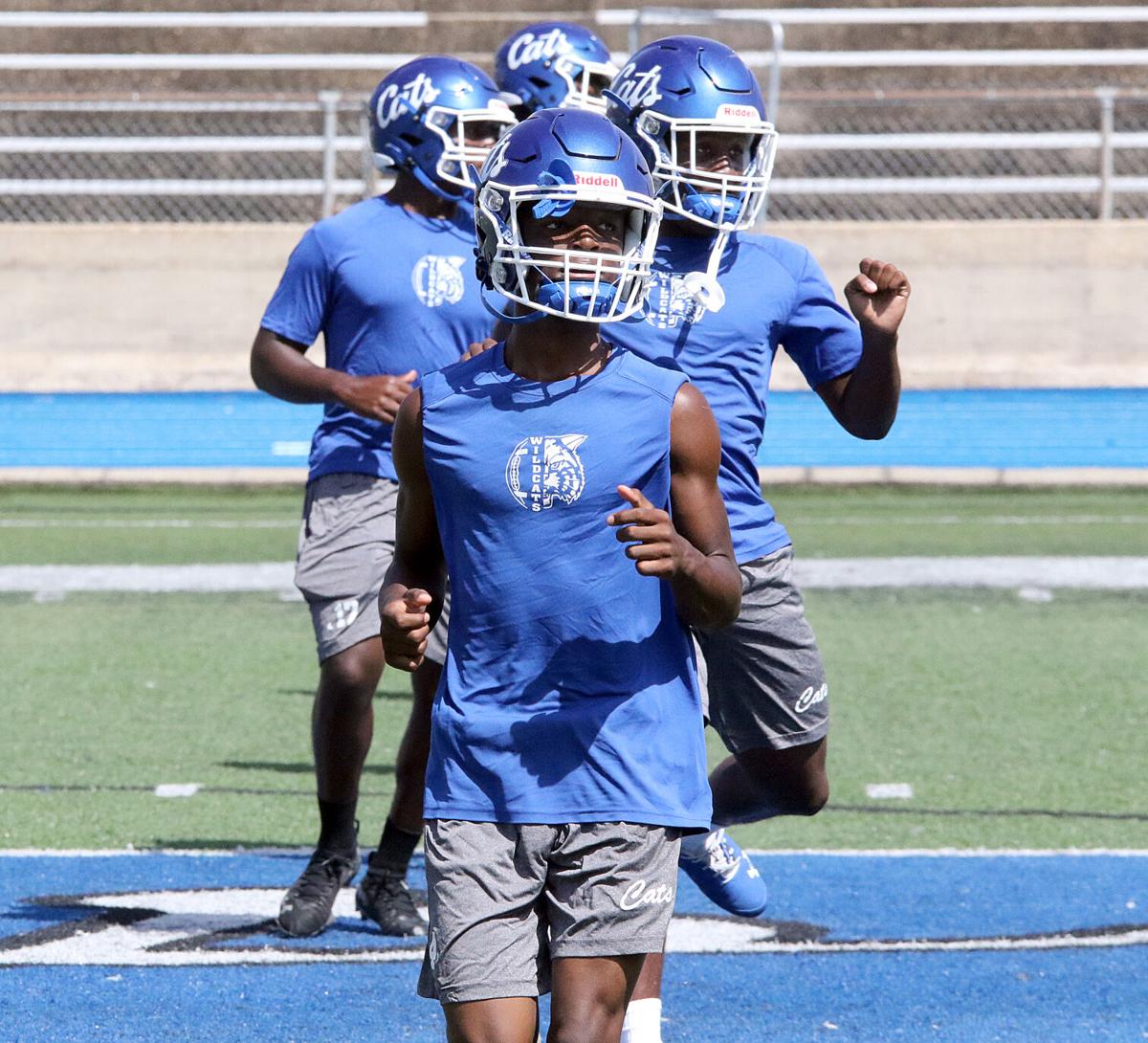 Smith leads his line to the center of the field at Ray Stadium Thursday during warmup drills.

Smith leads his line to the center of the field at Ray Stadium Thursday during warmup drills.

Tucking the ball and running when a play broke down was a safety net for quarterback Mark Smith in middle school.

Last year, when he was a freshman at Meridian High School, Smith got a few starts under center and tried to do the same thing. It didn’t go nearly as well.

“I learned that you can’t just run like you want to and you have to be able to read defenses and be smarter with the ball,” Smith admitted. “I didn’t get that many yards (when I tried). You have to give the play time to set up.”

A year later, the Wildcats coaching staff has selected Smith as its starting quarterback. The offseason has been anything but typical for Smith and his MHS teammates, as the COVID-19 pandemic forced spring practices to be canceled and, with them, hours of teaching opportunities for the coaches to prepare their players for the mental part of football. Despite the challenges, they feel confident Smith has developed as a player to the point where he can lead the MHS offense.

“He’s been very attentive to everything we’ve been doing,” offensive coordinator Glen Sanders said. “He works hard every day and puts the effort into doing all of our drills correctly. I told him when he first started that I would like him to be a machine back there: Distribute the football, run the offense efficiently, take care of the ball and just lead our team, and he goes out there every day and works hard and does all the little things it takes to be successful.”

Wildcats head coach John Douglass said it was difficult to settle on a starting quarterback in 2019 with the season being so chaotic. He wasn’t hired until late June of last year, which didn’t afford much time to install an offense and figure out who would fit best under center.

“Last year was kind of a revolving door. I may be the only one who didn’t start at quarterback last year,” Douglass said with a chuckle. “We were trying different things and going in different directions, trying to settle on something that was productive. We ended up the season with someone else at quarterback, but he’s come on and had a really good summer and fall.”

Douglass said he’s been impressed with Smith’s development in a year’s time, and he’s comfortable trusting Smith with such an important position.

“The biggest thing is his understanding and command of the offense, not necessarily with the big things but the little things like getting in and out of the right plays and getting the right people in motion — all the little things it really takes for the offense to run smoothly,” Douglass said. “Dropping back and throwing a touchdown pass or some of the exciting things offenses do, that’s nice, but a lot of times it’s set up and it opens up because they’ve done those other things well. The fact that he keeps us consistent from play to play, we’re fairly confident things will be executed and maneuvered the right way. It doesn’t mean everything will be successful, but at least everything will get started at the right time with people moving in the right direction, and we think that will lead to bigger plays in other areas.”

MHS will run a double wing offense with multiple looks this fall, and even with the lack of spring practices, Douglass said Smith and his teammates have done well in picking up the new scheme.

“Not only did we not have the spring, but we have new offensive and defensive systems, so all of our kids have had to learn on the fly,” Douglass said. “We haven’t spent as much time in the weight room and as much time doing the typical summer activities because we were trying to make up for the lost time on some of the teaching we missed in the spring. He and everyone else have really responded well from that standpoint, and now we need to take what we’ve learned and go out and play physical, hard-nosed football.”

Since it’s a new system, Smith said the offense is still a work in progress heading into the season.

“I think we’re adjusting pretty well,” Smith said. “We just have to get the signs down and know where everyone is supposed to be.”

For Smith, it’s much bigger than a scheme, however. He wants his teammates to have the same passion he does about getting the Wildcats back into the state championship picture after a disappointing 2-10 season last fall, and he knows that will require dedication beyond the typical practice.

“I want to get us (on the same page) and be a good football program again,” Smith said. “I talk to my teammates sometimes about that, just trying to get them to practice or work extra. I feel like we have a good team, we just have to get the extra work in.”

Even though he’s a sophomore, Smith said he feels like he has to be a leader due to the position he plays. He also said he’s aware that being a quarterback puts a target on him, but it doesn’t intimidate him.

“It’s a lot of pressure, but you just have to step up to the play and take it,” Smith said.