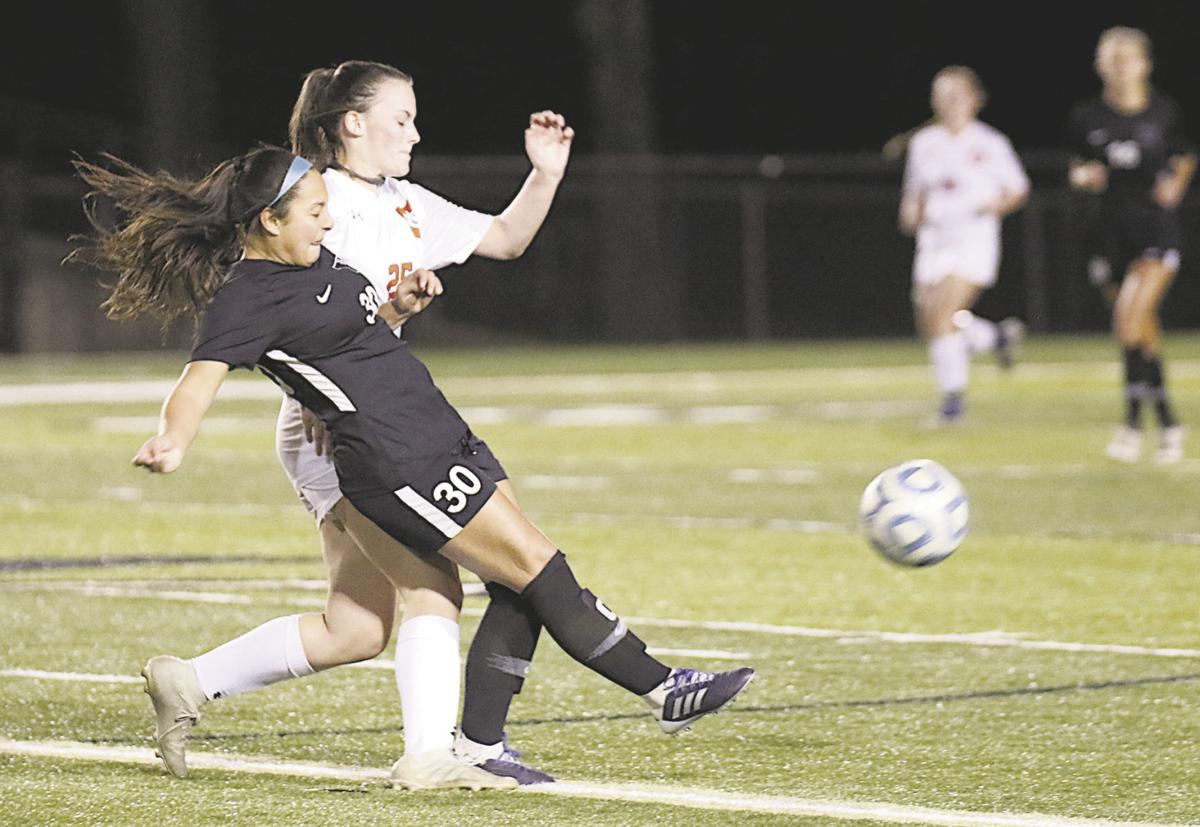 West Lauderdale’s Mia Aviles takes over the ball and kicks it away against Newton County’s Hallie Grace Stribling in an earlier game this season. 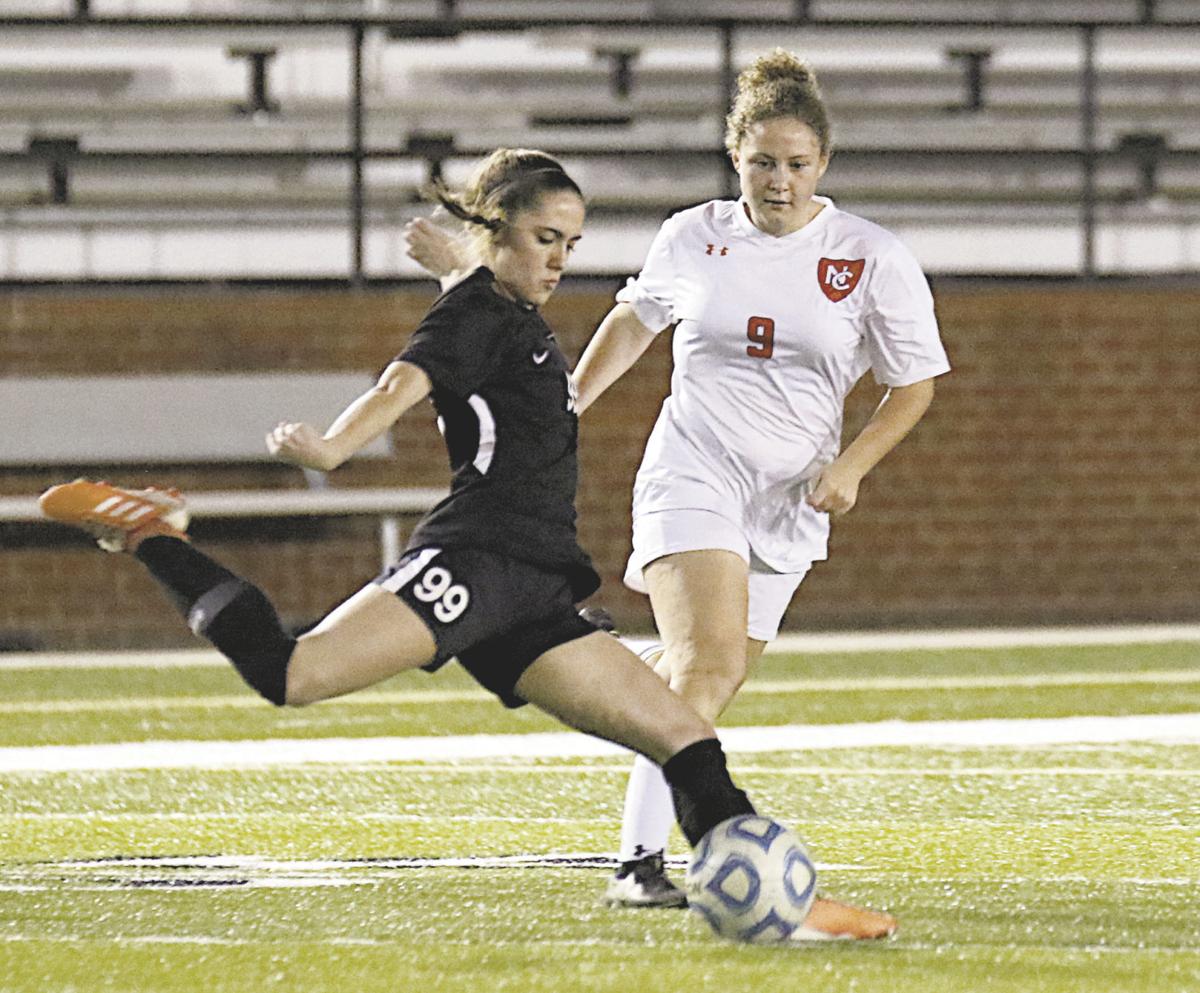 West Lauderdale’s Katheryn Knuth gets set to boot the ball away from Newton County’s Jazmine Williams in an earlier game this season.

West Lauderdale’s Mia Aviles takes over the ball and kicks it away against Newton County’s Hallie Grace Stribling in an earlier game this season.

West Lauderdale’s Katheryn Knuth gets set to boot the ball away from Newton County’s Jazmine Williams in an earlier game this season.

COLLINSVILLE — The final high school practice usually has a somber feeling for seniors.

For the six seniors on the West Lauderdale girls soccer team, it helped that the final practice on Thursday was two days before they play for their fourth state title in a five-year timespan.

The Lady Knights (22-1-3) will take on Florence (18-3-4) at noon Saturday at Brandon High School for the MHSAA Class 4A state championship. Its the fifth year in a row West Lauderdale has earned a berth in the championship, and a win Saturday would give the school its fourth 4A crown.

“There’s a bit of excitement, but Saturday is also the last day for us seniors to play together as a whole,” senior center back Mia Aviles said. “But we’re excited about the progress we’ve made with the younger players.”

The girls soccer program at West Lauderdale has become a model of consistency, and the Lady Knights are currently ranked No. 2 in the state on MaxPreps.com. That consistency has led to three championships in four seasons, and it’s part of why head coach Alex George has full faith in his team heading into Saturday’s contest.

“This team has been together for quite some time now,” George said. “We have six seniors, and it’s been a long season. We started back in September with conditioning and lifting weights, and that whole process leads us to this point, but we’re not defined by one moment. I want them to understand that we have to trust the whole process through this, and when we get on the field Saturday, we have to know that we’ve been battle-tested, and we understand the dynamics of the state championships game because we’ve been there.”

Aviles, a Holmes Community College signee, said the success the program has previously had helps the girls maintain confidence in themselves going into Saturday.

“In ’18 we didn’t win (state), but that lit a fire in us, and we’re just playing the game we love and have really good determination as a team,” Aviles said.

William Carey signee Kathryn Knuth said she’s grateful her final high school game will be for a state championship, and she hopes to end her career at West Lauderdale on a high note with a win.

“It’s a good feeling knowing we’ve worked this hard every year and keep getting to our goal,” Knuth said.

With the success comes pressure, though, and Knuth said she isn’t immune to feeling that pressure.

“I don’t know about my teammates, but I’ve been freaking out,” Knuth admitted. “Just because we win, we still feel stress and everything just like everyone else does.”

George said the best approach to overcoming that pressure is to understand that once the game gets going, it’s just another game, even if it takes a little while for the girls to settle in.

“We know what to expect,” George said. “We understand presence of mind and not allowing the pomp and dance to become more than what it is. When all is said and done and the whistle blows, it just becomes two teams. There is a lot on the line, but at the same time we have to understand that West Lauderdale girls soccer put themselves on the map not on one game but on a series of years that this program has been working toward in building itself up into a successful program.”

Florence and West Lauderdale opened the season against each other, with the Lady Knights taking a 3-0 win Nov. 2 in the East Central Community College Classic.

“I know they’ll step to a lot of our balls and be really compact so we can’t send those through balls, so we’ll try to spread out in the middle and play faster,” Aviles said.