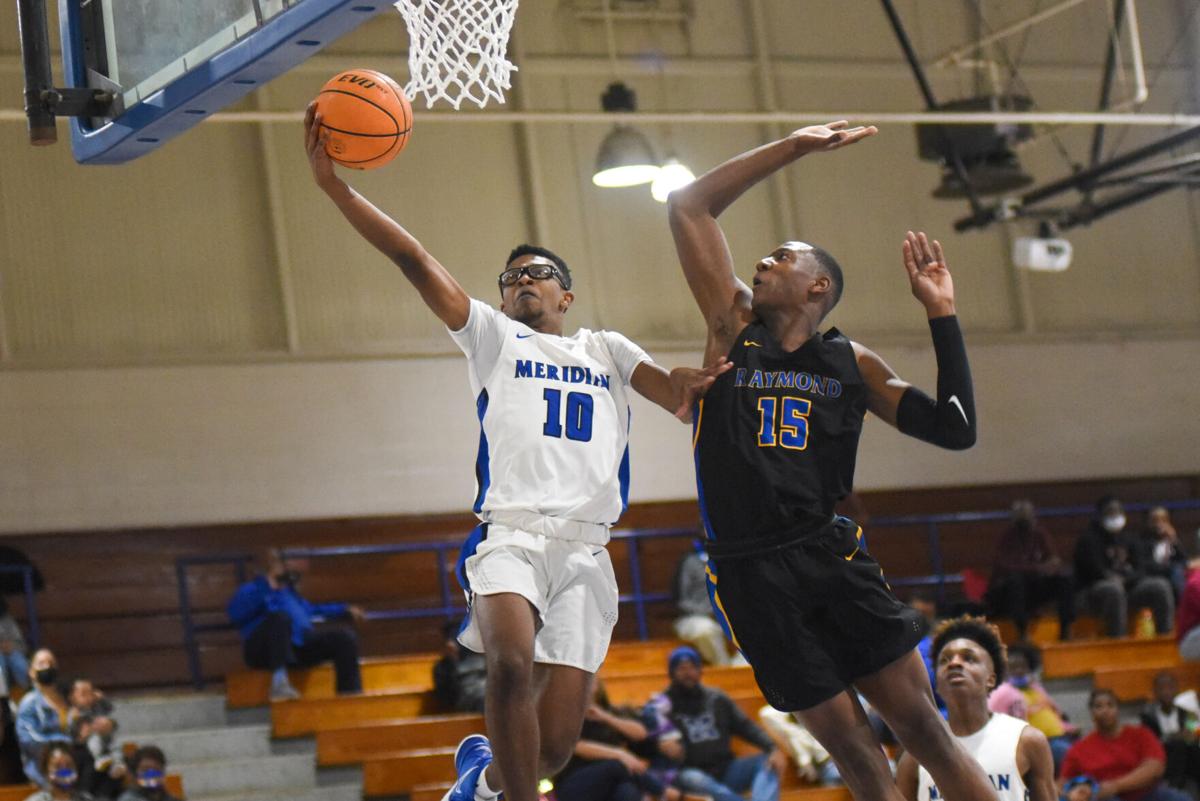 Meridian's Devin Portis goes up for a shot against Raymond during their game Tuesday, Nov. 23, 2021, at Meridian. 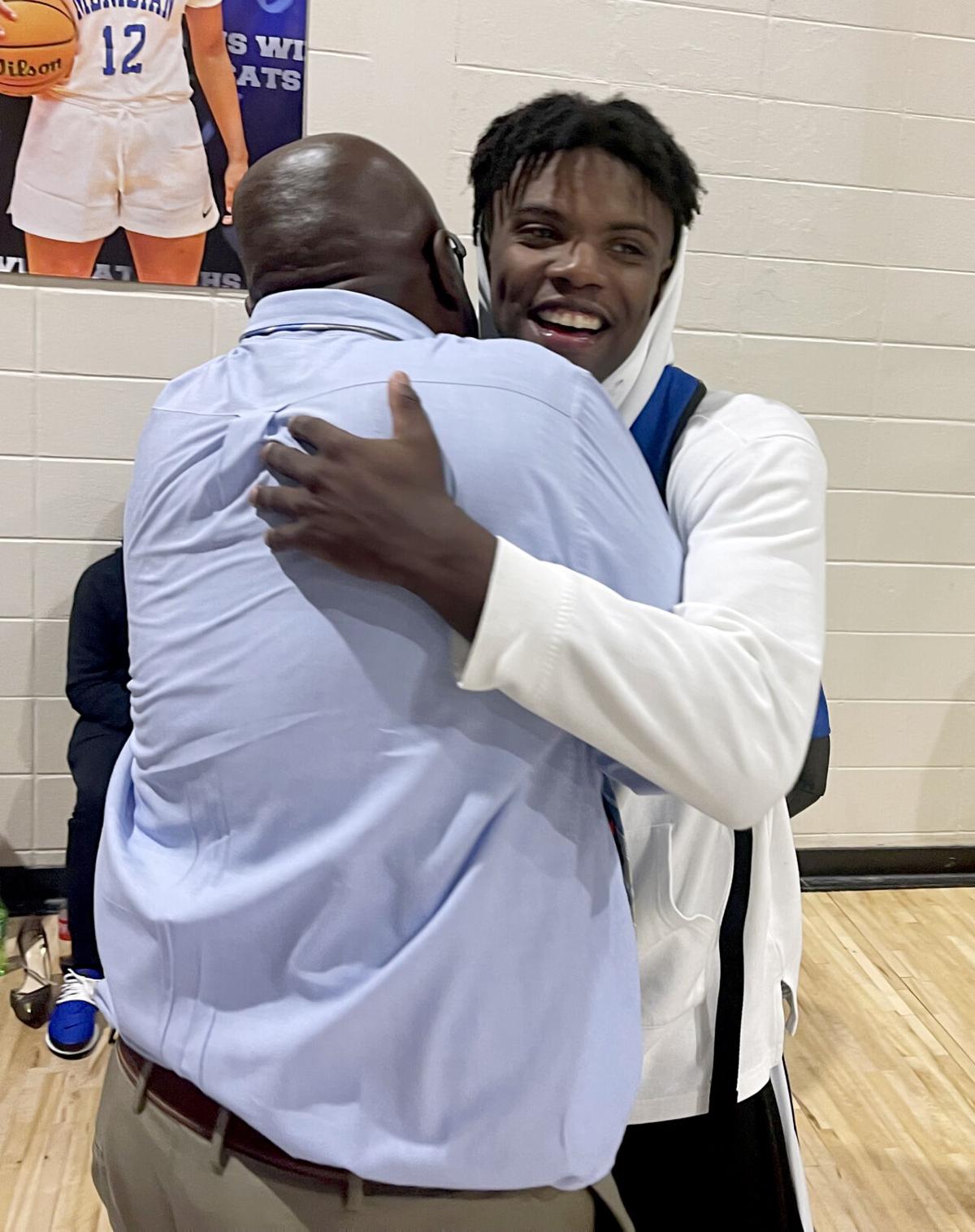 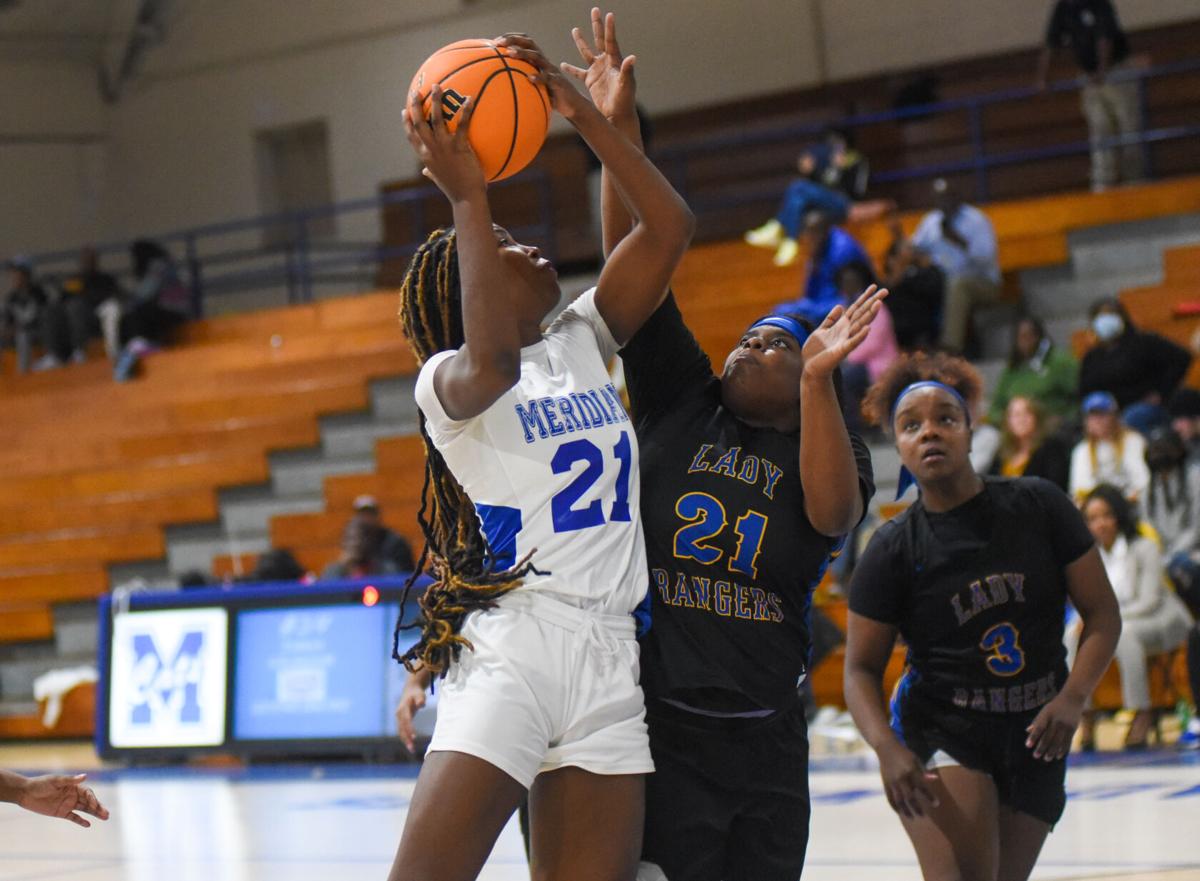 Meridian's Debreasha Powe battles at the basket with a Raymond defender during their game Tuesday, Nov. 23, 2021, at Meridian. 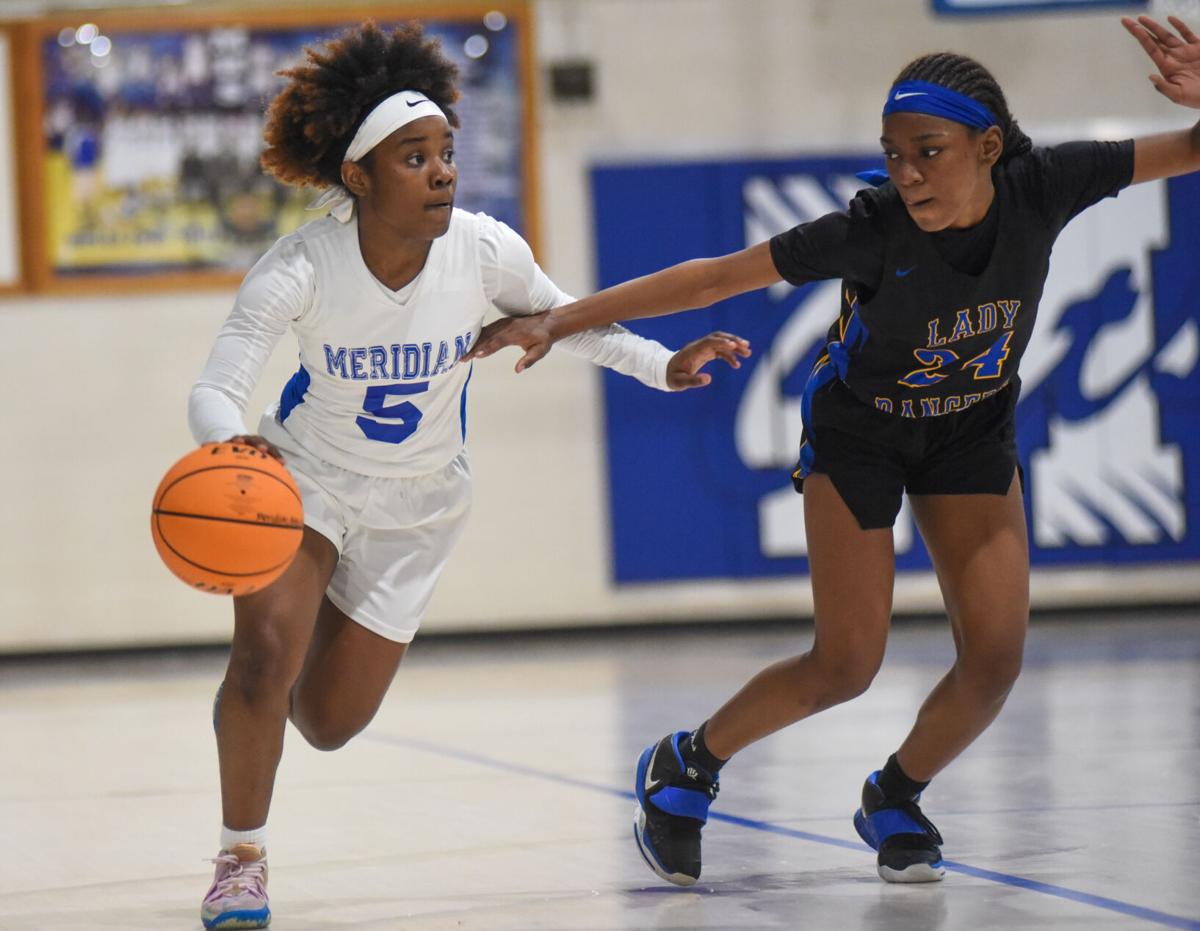 Meridian's Jamire Clayton (5) looks up the court as she dribbles the ball during the Lady Wildcats' game Tuesday, Nov. 23, 2021, against Raymond at Meridian.

Meridian's Devin Portis goes up for a shot against Raymond during their game Tuesday, Nov. 23, 2021, at Meridian.

Meridian High School’s senior point guard picked up two quick fouls in the Wildcats’ home contest against Raymond Tuesday evening, forcing him to leave the game with 5:24 remaining in the opening quarter and spend the rest of the first half on the bench. Wildcats head coach Ron Norman wasn’t thrilled and made it known to Powe that he expected more from one of his team’s leaders.

But Powe didn’t let the start define him, as he came out of the locker room and drained three 3-pointers in the third quarter to help Meridian keep pace with a Rangers team that’s expected to compete for an MHSAA Class 4A state championship. He made several more big shots in the fourth quarter and also went 6-for-6 at the free throne line in the game’s final minute to help the Wildcats edge Raymond 56-50.

“That’s what your senior has to do,” Norman said. “He knew he messed up by getting those fouls, and I trusted him. (I’d rather he) give up a layup in the first quarter rather than get two fouls. He’s a great kid, he sat over there on the bench and was a great teammate, and then he came in and closed the game. That’s what your best player is supposed to do.”

Meridian led 12-9 after the first quarter and was able to take a 25-23 lead into the half when Devin Portis drained a 3 with three seconds remaining before intermission to give his team positive momentum going into the break. Knowing he would finally be able to come back in to start the third, Powe said he let the adrenaline fuel him, which is what kept him from entering the game cold despite spending most of the first half on the bench.

After draining three 3s in the third quarter, Powe said it gave him confidence to finish the game strong, and he was happy to be back on the court to help his teammates after cheering them on for battling in the first half.

“Words can’t describe how badly I wanted that,” Powe said. “It was just the heat of the moment. I have to keep my team first, even when I was sitting on the bench. I was keeping them motivated and keeping myself motivated so I could be ready for when he tells me to come back in.”

Powe hit two more 3s in the fourth quarter, one after blocking a shot by Raymond’s Tremaine Dixon with 5:03 remaining. A block by Portis set up a layup for Powe with 4:03 remaining, and Powe then hit all six free throws to finish the contest with 25 points.

“You just have to stay confident in what you do and the work you put in when no one was looking,” Powe said about draining those six foul shots under pressure.

Javion Yarbrough finished with 10 points for the Wildcats, while Portis tallied eight points.

For Raymond, Jabarie Robinson had a team-high 24 points, and Eric Paymon finished with 11 points. Rangers head coach Tony Tadlock, a former assistant coach for Meridian, said scheduling tough games like Tuesday’s at Meridian are meant to make sure his team is battle-tested by the time the Class 4A playoffs roll around.

“We’ve had to go to Calloway, to Terry and obviously, Meridian, then Saturday we go to Corinth — which is a four-hour trip for us — to the Lighthouse Classic and play Madison Prep (Academy), one of the top teams in Louisiana,” Tadlock said. “Going into environments like that prepares you for February and March, because if you want to win in the playoffs you have to be able to win on the road.”

After being a member of Norman’s staff that won the Class 6A state title in 2017, Tadlock has led Raymond to two Class 4A championships at Raymond, and the Rangers also played for the Class 4A title last season. Tuesday’s game felt like a homecoming for Tadlock, and he said his time in Meridian helped prepare him to excel at Raymond, his first head coaching job. The Rangers have scheduled Meridian four times since Tadlock has been at Raymond, with the 2020-21 COVID-19 season being the only time the two hadn’t played since Tadlock has been coaching the Rangers.

“It felt great being able to see former colleagues and friends and being able to play against Meridian,” Tadlock said. “I enjoy the challenge every year. Meridian is a special place to me. I learned a lot and gained a lot of valuable information to help me now that I’m at Raymond.”

The Wildcats will travel this weekend to the Tougaloo Classic.

Debreasha Powe finished with 25 points for the Lady Wildcats, and Tytaina Buckley tallied nine points for Meridian. Head coach Deneshia Faulkner said fatigue set in as the game went on, which is to be expected this early in the season.

“It’s ugly,” Faulkner said. “We’re a little beat up right now and can’t really feel our legs, so we’re going through some growing pains. It’s just the beginning of the year, so we have to get our legs up under us. We’ll be OK. We just have to make sure we stay healthy.”

The Lady Wildcats will travel to Atlanta this weekend to participate in a holiday tournament.