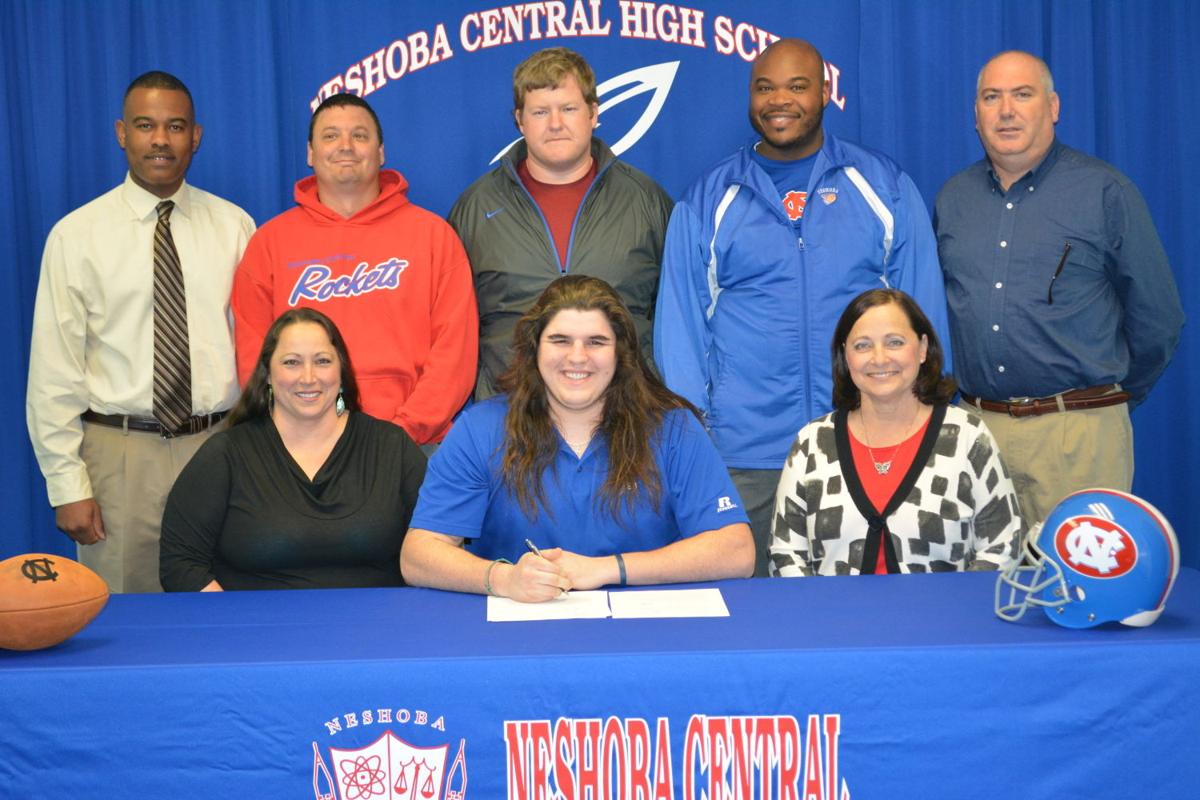 Neshoba Central football standout Cody Beckham signs to continue his career at the University of West Alabama as family members and NCHS faculty look on. 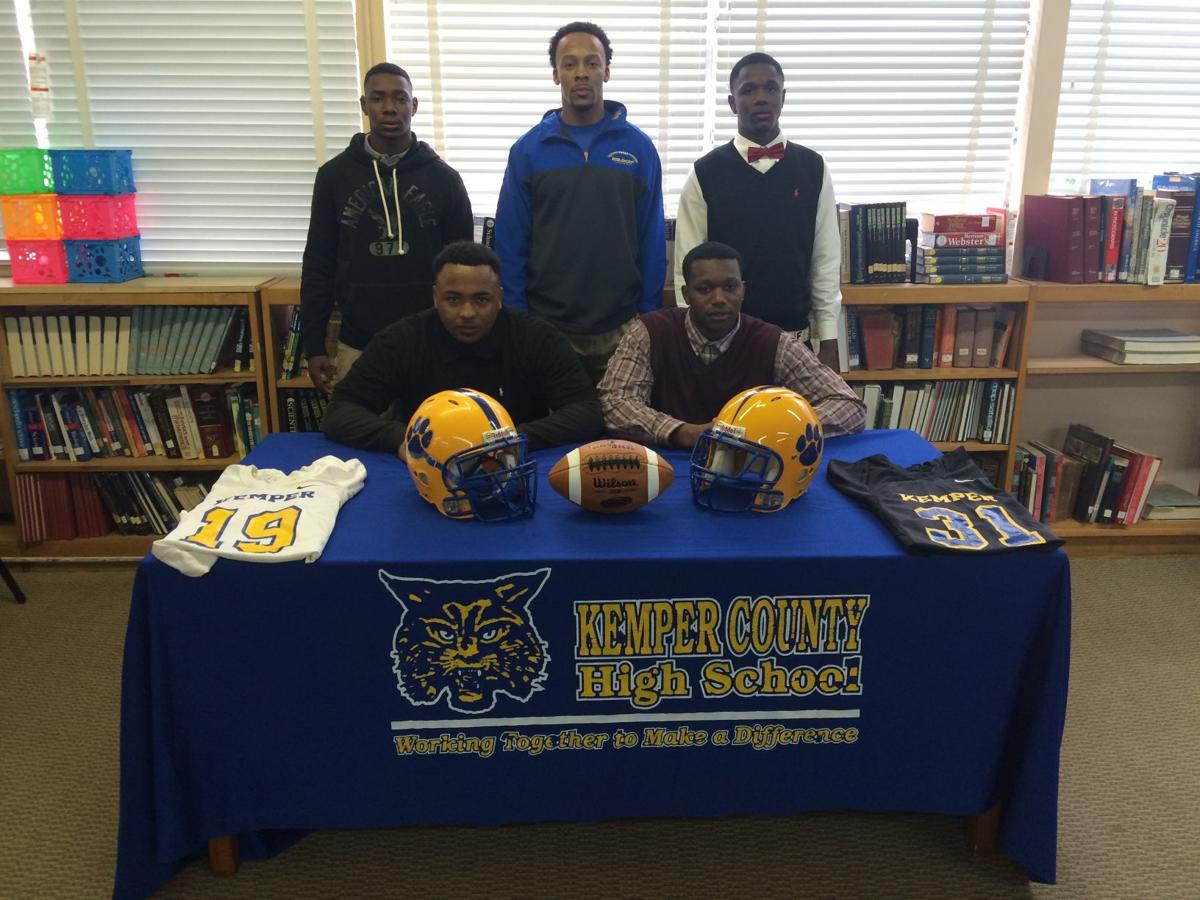 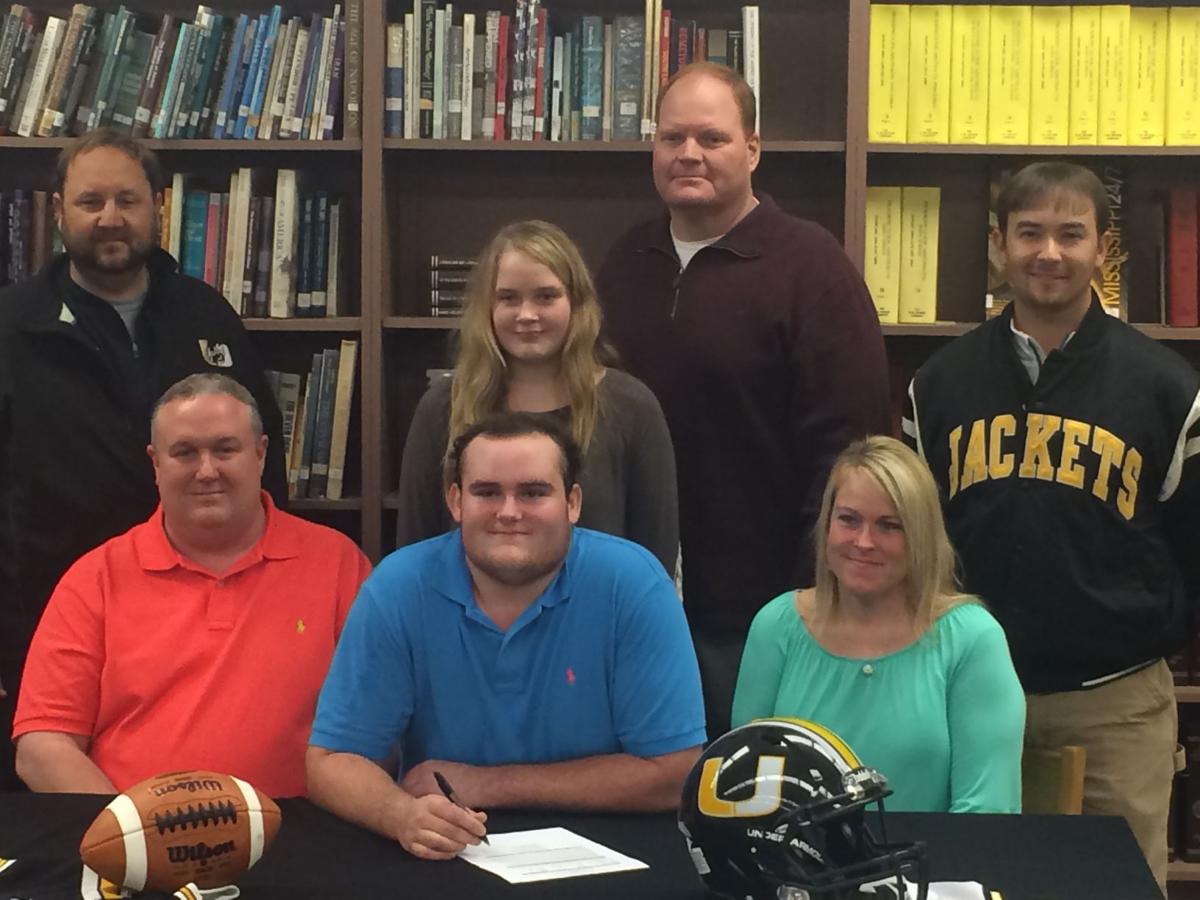 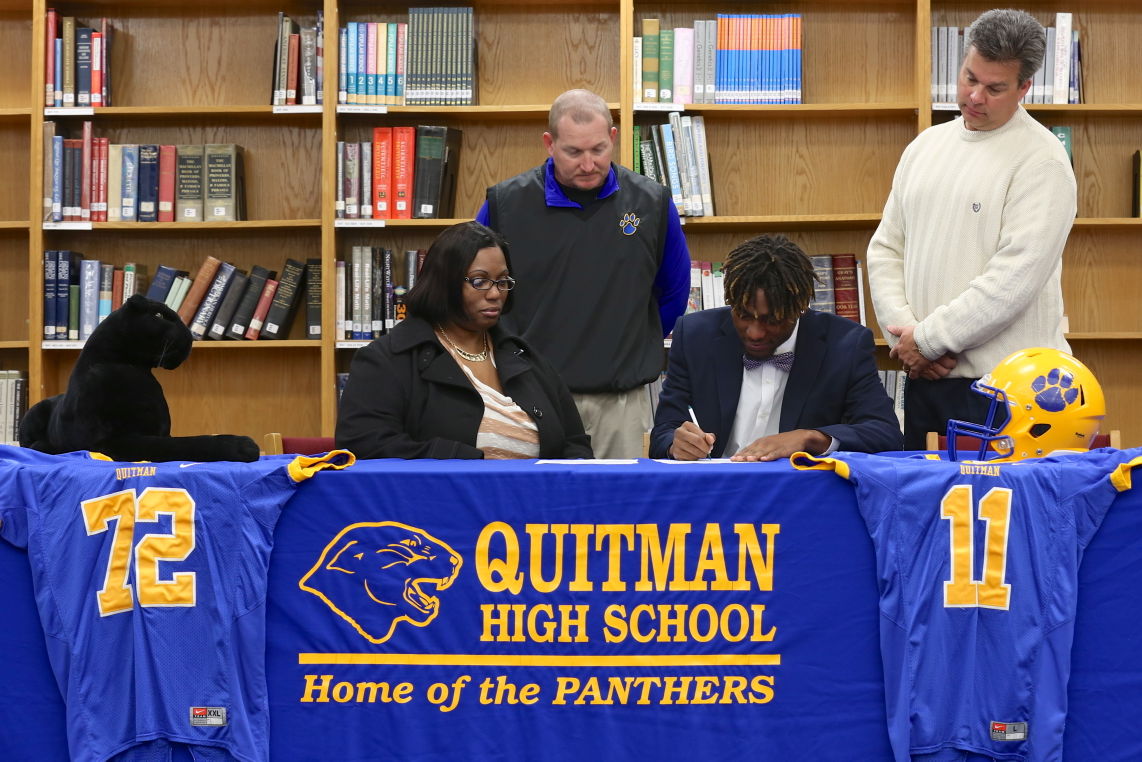 Neshoba Central football standout Cody Beckham signs to continue his career at the University of West Alabama as family members and NCHS faculty look on.

DE KALB — This past year, Kemper County High School produced a magical run through the MHSAA Class 3A playoffs as it advanced all the way to the North State title game.

On Wednesday, the Wildcats built on their successful gridiron campaign with four players signing a National Letter of Intent with Northeast Mississippi Community College.

Bryce Brown, Jonathan Jones, Antwon McCoy and LaCederick Odom all inked with the Tigers. Additionally, running back Devante Scott signed with Northwest Mississippi Community College and enrolled at the school at mid-term.

“I’m happy for these guys, because at the end of the day, this is what it’s all about,” Kemper County coach Chris Jones said. “We strive for championships, but in the end, you just want to see your kids get to college and continue their education and continue to pursue their dream.”

Odom said the decision for the quartet to attend Northeast was a group decision among the standouts.

“It’s going to be a lot of fun going there with them,” Odom said. “They’re my high school teammates, and I know what we all are capable of doing.”

Additionally, McCoy said the Tigers program provided a comfort level that was unmatched.

“I liked the environment up there,” McCoy said. “The school is a great program, and they are great academics-wise. I just felt it was a good fit for me.”

The signees helped lead Kemper County to an 11-4 mark in 2014 and helped secure the school’s first home playoff win in history — a 42-6 shellacking of East Side High School — before falling to Charleston 31-28 two weeks later.

“This year was a good experience,” Jones said. “The (Charleston game) was a hard loss. The way Coach Jones came in and taught us the ropes, what hard work means. What you put in is what you get out, he put that in our heads, and it led up to (Wednesday). We get a chance to sign with Northeast. This is a big day, and I’m really excited.”

However, Wednesday’s signings for the standouts signifies the end of a successful high school career, a period of time they will forever cherish.

“Coming from Kemper County, a lot of people don’t know your name,” Brown said. “We probably had to work harder than most. I had good times (at Kemper County). I’m going to miss it a lot — a whole lot.”

“This says a lot about our program as far as it being headed in the right direction,” said Jones, who will be entering his third-year at the helm in the fall. “Year-in and year-out, we want to be able to send guys to college. It’s not just about wins and losses. It’s about helping the kids and having them succeed, and this is the next step for them. Getting a high school diploma, getting a college degree, it gives the younger players something to shoot for.”

Beckham on his way to Livingston

Following some deliberations with his mother, Toni Breland, Beckham made the decision to commit to the Tigers, culminating in his signing with the college Wednesday.

“My mom suggested that I go there after the visit,” Beckham said. “So that kind of helped push me there.”

Additionally, the 6-foot-3, 270-pound offensive lineman said the atmosphere on campus played a pivotal role in his decision.

“The campus is great, and I get along with the players,” Beckham said. “I’ve been going up there for camps, and we had a couple of games up there, and I really like everything about the area. All of it is a good atmosphere. I have good times up there.”

This past season, Beckham helped guide the Rockets to just their second winning campaign in the last six seasons, posting a 6-5 record.

“I wanted to leave something good here,” Beckham said. “I really wanted to turn it around from the year before (a 1-9 season), so I did my best to lead the team, and it all turned out pretty well.”

Beckham has spent his entire academic career in the Neshoba Central school system and will have a lasting memory of his home school as he departs for college.

“There is no school like it,” Beckham said. “I have great friends here, great teachers and coaches. I’ve been blessed to have great coaches throughout my career. It’s just an all-around great high school.”

For Beckham, inking his name to a college has been a dream come true.

“I’ve been waiting a long time for this, and I’m just ready to get started,” Beckham said. “The coaching staff has been telling me to continue to work hard and be ready to go when I get up there.”

Baysinger makes it official with Northeast

UNION — Union High School’s Ryan Baysinger sat in the office of Northeast Mississippi Community College coach Greg Davis with his parents, Christy and Chad, in the middle of January.

The Tigers coach went over the details of the scholarship they were prepared to offer Baysinger.

“Coach Davis told me all I had to pay for was books and fees,” Baysinger said. “My daddy looked over at him and said, ‘So you’re telling us (Ryan) is going to be a Tiger, right?’”

On Wednesday, Baysinger made his pledge to Northeast Mississippi official as he signed a National Letter of Intent with the college.

“This is a big day; it’s a big opportunity to play ball at the next level,” Baysinger said. “It’s exciting. Nobody in my family has ever had an opportunity like this, and it’s just surreal.”

The senior said the welcoming environment in Booneville served as a catalyst in his decision-making process.

“They have great facilities, and the coaches are phenomenal,” Baysinger said. “Their players are always happy to greet you, and it’s just a family atmosphere.”

Baysinger’s signing served as an exclamation point to a standout 2014 campaign, which witnessed the 6-foot-4, 290-pound center earn MHSAA Class 2A All-State honors.

“Northeast is getting a great kid, and a great student,” Union coach Brad Breland said. “He is a guy that plays hard, and I believe he'll work hard to get better. He’s still young (17 years old), so he’ll develop strength and size, and I think he’s going to be a really good player.”

Additionally, Breland said Baysinger is precisely the type of athlete he wants the Union program to personify on and off the field.

“He’s really the kind of guy that we want in our program, the kind that we want to build our program around,” Breland said. “He’s a hard worker and a high-character guy. He’s a leader, and we’ve known since he was young that he was going to be a really good football player. I think his best days are still to come.”

This past year, Baysinger helped lead the Yellowjackets to four straight wins to end the regular season, and a second-round playoff appearance before eventually falling to Taylorsville High School.

QUITMAN — When Quitman High School’s DeQuan Stanley went down with a knee injury Oct. 17 against Greene County High School, the senior didn’t know what his future would hold.

Stanley would have surgery on Oct. 30 to repair a torn ACL in his knee, and on Wednesday he signed a National Letter of Intent with Pearl River Community College to further pursue his football aspirations.

“I didn’t know I was going to be able to sign with anyone, and I'm just really excited that I'm able to sign,” Stanley said.

Stanley is well into his six-to-nine-month rehabilitation program, and while the process has not always proven easy, the senior is confident that he’ll return better than ever.

“It’s tough,” Stanley said. “I work out every day and go to therapy. I’m just trying to get back to 100 percent so I can get back onto the field. I’m trying to come back stronger and faster.”

Stanley said Pearl River is recruiting him to play him at either wide receiver or in the secondary.

“He’s one of those do-it-all athletes,” Quitman coach Steve Bynum said. “Offense, defense and special teams. You can move him around anywhere, and he’ll be comfortable there.”

Bynum added he’s noticed a rejuvenated spirit in Stanley and is eager to see him at full strength.

“Pearl is getting a guy that is hungry to succeed,” Bynum said. “I think with the injury, that really put being able to play ball in perspective for him. It was kind of a humbling effect. You can feel on top of the world at one moment, then have it taken away from you the next play. He’s a hungry to come back from this injury and play as long as he can.”

Despite missing the last four games of the 2014 campaign, Stanley leaves Quitman as a member of three South State runner-up squads.