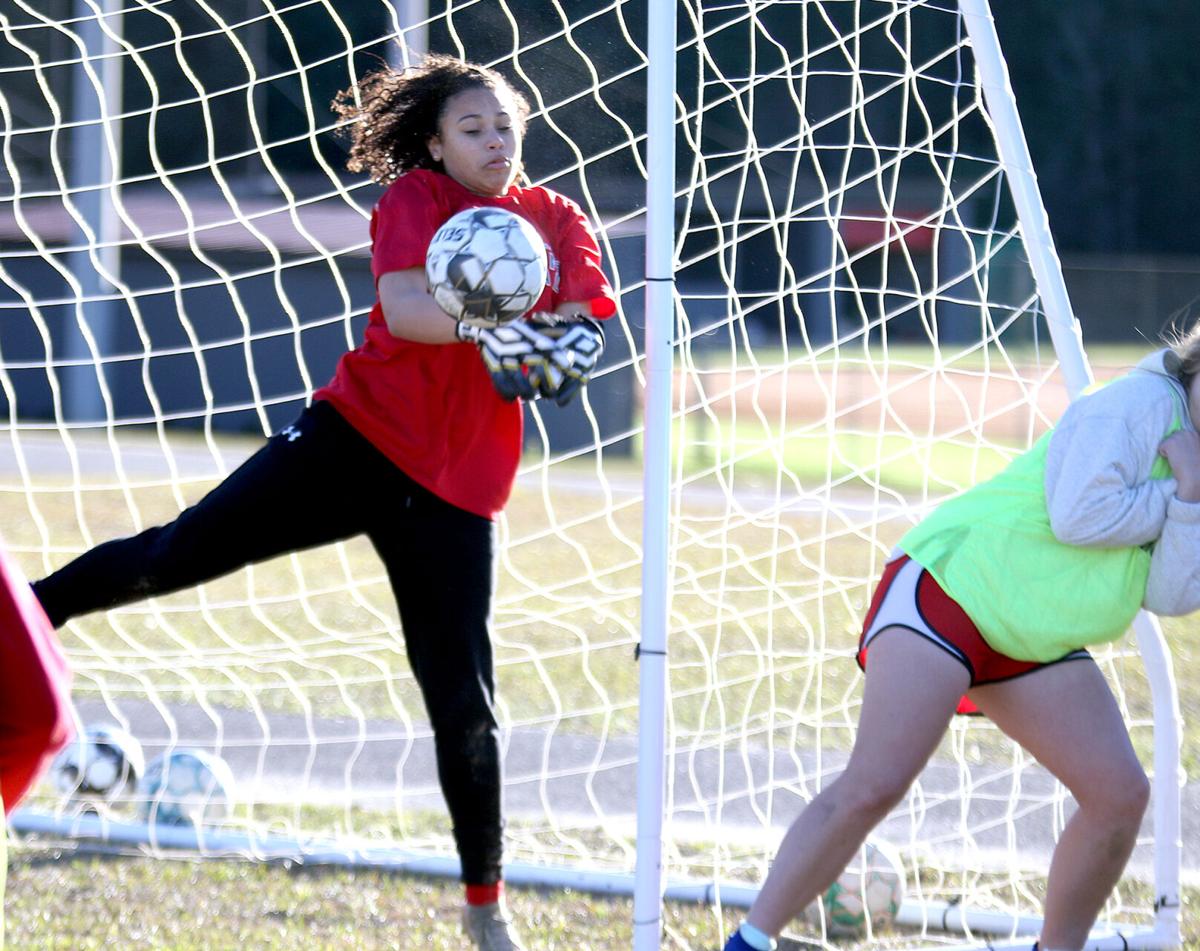 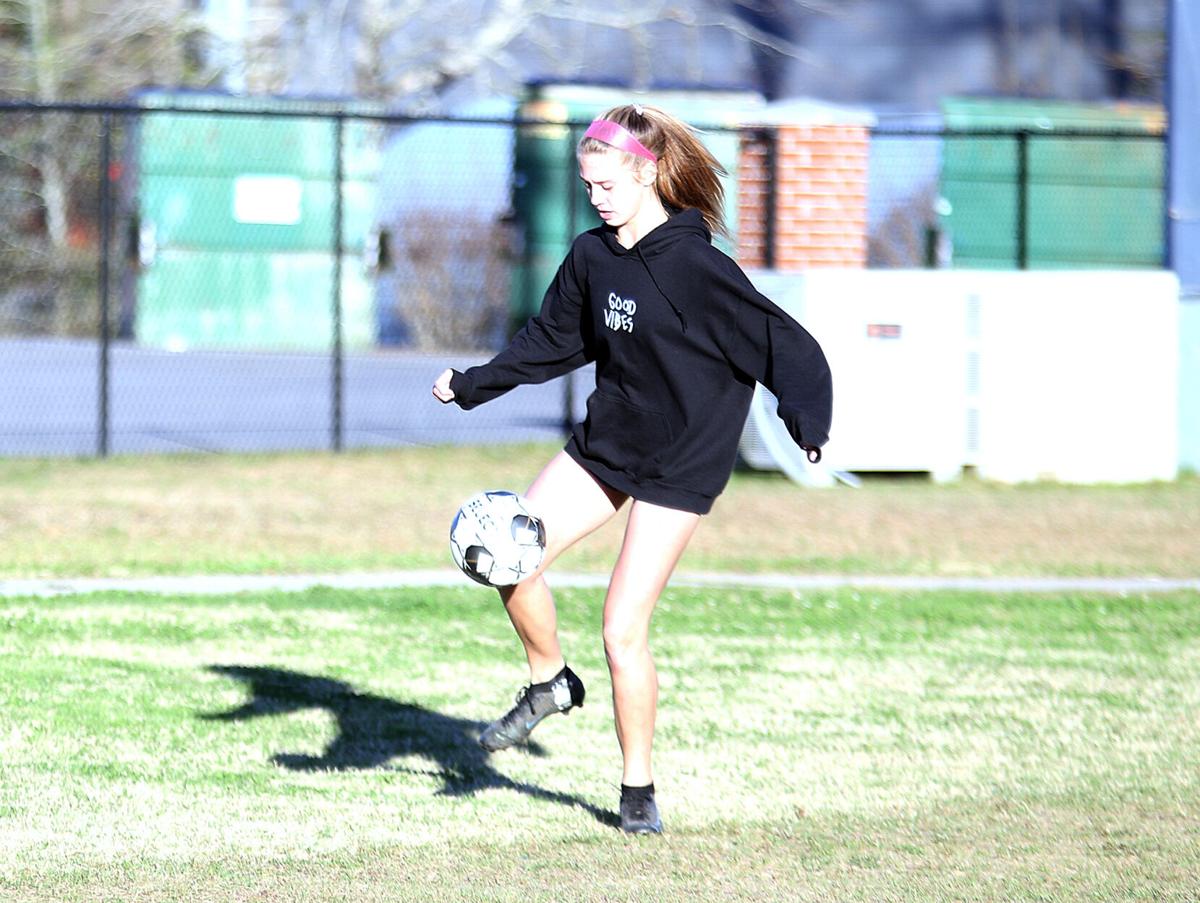 Eighth grader Macie Barham gets control of the ball during practice Monday, Jan. 10, 2022.

The hoodie Macie Barham wore at practice Monday afternoon had the words “good vibes” written on the front.

She’s certainly brought good vibes on the Northeast Lauderdale girls soccer team. Despite only being an eighth grader, Barham currently leads the Lady Trojans with 22 goals so far this season. Alongside sophomore keeper Lauren Jade “LJ” Dancy, Barham is part of a young core that has head coach Candice Maloney excited for the program’s future.

“A large portion of the starting lineup comes from the middle school,” Maloney said. “We don’t have any seniors this year.”

Barham has plenty of soccer experience, though, as she started playing at the youth level as soon as she was old enough, and this is Barham’s second year to compete on the varsity team at Northeast Lauderdale. Seventh grade is the earliest you can play varsity in the MHSAA, and Barham said it wasn’t as intimidating for her as you might think.

“I’ve played club with so many (local players) so it was just like going against them in practice, but I am more comfortable this year,” Barham explained.

Barham is primarily a center midfielder, but Maloney said she can play just about any position on the field — and she didn’t mince words when praising Barham.

“I think Macie is one of the best players in the entire region, and other coaches have their teams player her accordingly,” Maloney said.

She might lead the team in goals, but Barham said she finds it difficult to consider herself a leader.

“I’m just so young, so it’s hard to see myself that way,” Barham admitted.

That doesn’t stop Maloney from calling her one.

“Macie has played soccer her entire life, and she’s a leader on the field not just with directing the play but also dropping back and playing defense when the other team is attacking,” Maloney said. “She’s a phenomenal athlete and is very confident when she plays, and I think others on the team look to her while they’re both practicing and playing in games. She’s carried the team in several games.”

Even if she doesn’t consider herself a leader, that doesn’t mean Barham lacks confidence, as her years playing youth soccer have helped prepare her for varsity competition.

“I know the level of players I’ve played with, and I can keep up with them, so it just makes me want to try harder,” Barham said.

As a goalie, Dancy has plenty of time to watch Barham in action, and like Maloney, she called Barham a leader on the field.

“She has everyone’s back when she’s on the field,” Dancy said. “She’s a very good player, so that carries a lot of weight.”

Barham returned the praise to Dancy, saying there’s a lot of comfort having a keeper she can trust on the field with her.

“I feel like she’s really confident,” Barham said. “She comes out of the goal like she knows she’s going to get it every time.”

This is Dancy’s third year playing varsity for Northeast Lauderdale, but it’s only her first one as a full-time keeper, though she did play in the goal a few times last season. Dancy played keeper at the youth level as well, so when Maloney approached her about being the team’s starting goalie, the idea excited her.

“It is a big responsibility, though,” Dancy said.

Dancy gets goalie-specific coaching from Elise Ethridge, a local physical therapist who played college soccer at Millsaps as a keeper. Her development has pleased Maloney, who said Dancy is only going to get better once she’s an upperclassman.

“She’s been working really hard this season,” Maloney said. “She’s done a phenomenal job of blocking shots that probably should have counted as goals for the other teams. She also communicates well with our defense. That’s a huge deal for us because we have such a young team, and LJ is only a 10th grader herself, so she has a few more years where she’s just going to keep getting better.”

Some keepers might prefer to read and react, but Dancy said she often takes a more proactive approach to the position.

“I’m really aggressive, so I can come out of the goal when I need to and slide for balls,” Dancy explained.

She’s also a team captain, which makes sense given her three years of varsity experience, even if Dancy is only a sophomore.

“I’m the second oldest who’s been on the team a long time,” Dancy said. “I’m more of a vocal leader, and I think the fact I’ve been on the team for three years and most of the girls are younger than me helps me (in that regard).”

With players like Dancy and Barham and a roster with little turnover for the next few years, Maloney said the potential for the Lady Trojans going forward is high, even if they’ve taken their lumps this season against more experienced squads.

“They have nothing but good things ahead of them” Maloney said. “A lot of teams we’ve played beat us because they have juniors and seniors. Two years from now I’ll have lost a few players who are juniors now, but the core of our team will be two years better and two years more meshed with each other.”