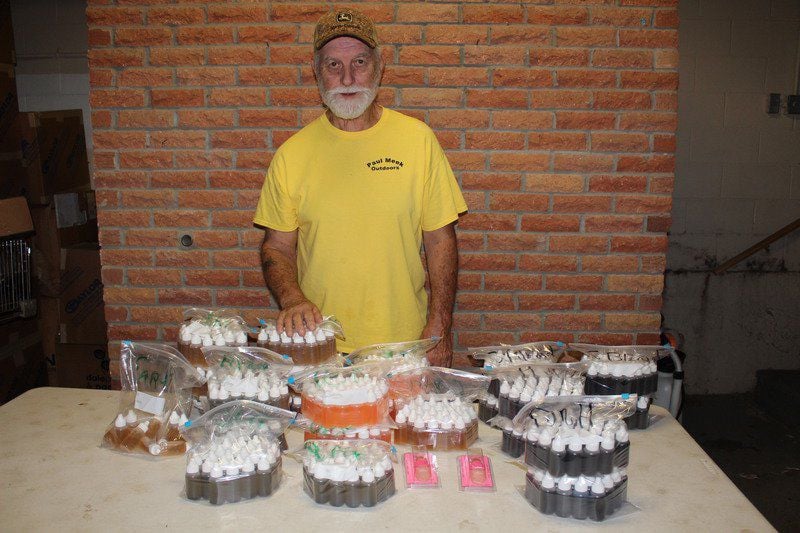 Paul Meek displays some of his custom deer lure scents that he mixes each year. 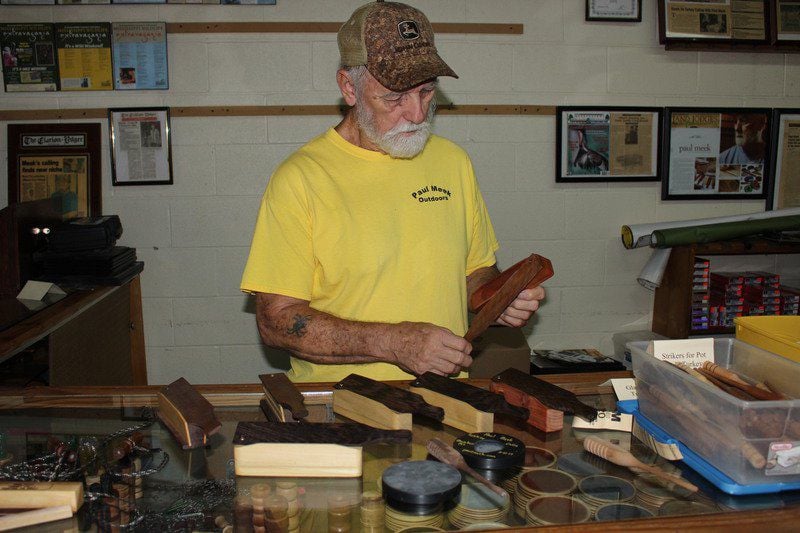 Paul Meek tunes up some of his custom turkey calls.

Paul Meek displays some of his custom deer lure scents that he mixes each year.

Paul Meek tunes up some of his custom turkey calls.

Paul Meek has been spreading his outdoors passion including his love of turkey hunting for more than 50 years.

A machinist by trade, this master turkey hunter and call maker has been making turkey calls and teaching people how to use them for nearly 40 years. In fact, there’s no doubt that Paul has trained more young people in the art of turkey calling than any other person in our state’s rich history.

Meek, of Morton, started making turkey calls in 1974 while also training others to use them at outdoor shows and seminars around the South. His seminars “Hands on Turkey Calling for Kids and Beginners” are geared toward beginning turkey hunters of all ages. He has been conducting seminars at the annual Mississippi Wildlife Federation’s Wildlife Extravaganza for nearly 20 years.

Meek was on the forefront of the modern turkey calling competition while forming a calling team that traveled the South winning contests and putting on calling clinics at the same time. Meek’s sons Shawn and P. W. are both Mississippi state turkey calling champions and have won or placed in more than a hundred turkey calling and owl hooting contests throughout the South. Members of his pro staff have won more contests than we can mention here due to limited space.

Meek’s “Custom Hunter” box call is his trademark box and has probably been responsible for more turkey kills than any call. His unique “Rock Pot” call is a tribute to his ingenuity as no two are made the same. Each Rock Pot has a different size and cut of rock with a handmade bottom.

While Paul Meek makes turkey calls, spreading his turkey hunting passion to others is ultimately his crowning glory. Paul has also been honored by having a display of his calls and hunting memorabilia in the Mississippi Wildlife Heritage Museum in Leland. Meek was on hand for the grand opening in June and was one of the first people to be acknowledged with a large shadowbox locker display.

In addition to being a master craftsman who makes not only his own turkey calls, duck calls and deer calls, but he also makes the machines and jigs that allow him to custom make each call. The old master also hand tunes each turkey call that he makes. While some people make pretty calls and some make lots of calls you might have to go through a bunch of them to find one that sounds good.

That’s not the case with Meek’s calls however, as each call has been hand tuned by the master himself. I stopped by Meek’s business this week and he took a break from mixing deer lure to show me a few of his calls. I picked up about a dozen and played them and each was in tune and ready to roll. It is simply amazing how easy they are to play and how simple it is. If you can’t play one of Meek’s calls you just can’t play a call.

If you want to learn a few things, then head to Morton and stop by Paul Meek’s and he’ll give you a few lessons and if you pay attention you’ll be singing a sweet tune of hen love talk very soon. Paul has authored a book that explains a step by step approach to making a scratch box call complete with instructions and pictures. If you want to get in the game then you need to give Paul a call at 601-732 -2211 or check him out online at www.paulmeek.com.