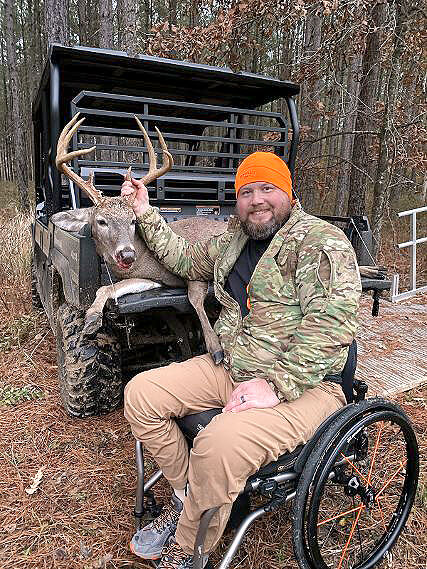 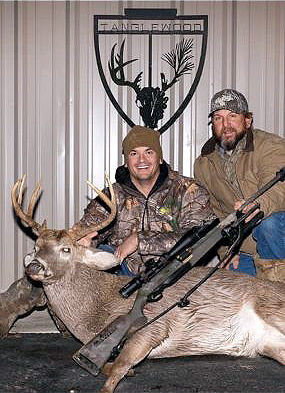 Amos Benjamin displays a trophy buck he harvested with the help of Guide Ted Hollingsworth at Joe McGee's Farm. 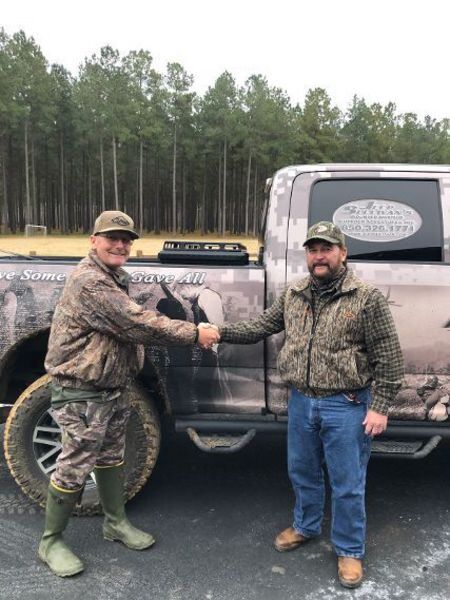 Jeep Sullivan, founder of Jeep Sullivan's Wounded Warrior Outdoor Adventures, spearheaded the local hunt with help from many landowners, guides and hosts, including the Tanglewood Retreat Center. For more information on how to get involved or help the wounded warriors, contact Jeep Sullivan at 850-326-1771 or view them online at jeepsullivan.com. 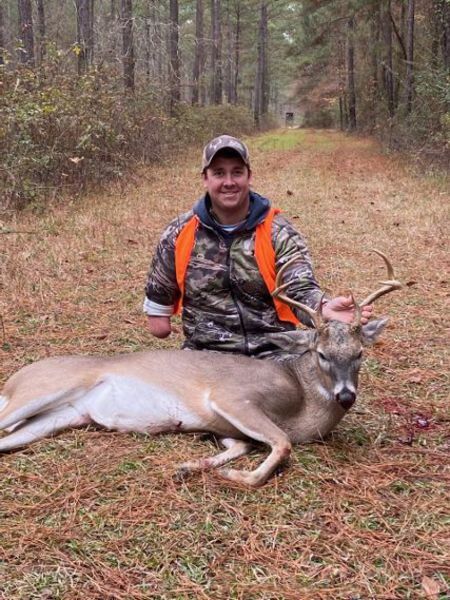 Captain Bobby Dove, from Destin, Florida, harvested this nice buck while participating in the Wounded Warrior Hunt held out of the Tanglewood Retreat Center recently.

Amos Benjamin displays a trophy buck he harvested with the help of Guide Ted Hollingsworth at Joe McGee's Farm.

Jeep Sullivan, founder of Jeep Sullivan's Wounded Warrior Outdoor Adventures, spearheaded the local hunt with help from many landowners, guides and hosts, including the Tanglewood Retreat Center. For more information on how to get involved or help the wounded warriors, contact Jeep Sullivan at 850-326-1771 or view them online at jeepsullivan.com.

Captain Bobby Dove, from Destin, Florida, harvested this nice buck while participating in the Wounded Warrior Hunt held out of the Tanglewood Retreat Center recently.

Ian Prescott arrived at the Tanglewood Retreat for the Jeep Sullivan Wounded Warrior Outdoor Adventure’s hunt around 12 p.m. and joined the other warriors as they sighted in their rifles for the hunt.

Prescott, a Green Beret and Purple Heart recipient, is still on active duty and lives in Crestview, Florida, as he recuperates from a sniper’s “kill shot” sustained in Afghanistan in 2018. Marty Puckett, of Delta Precision Shooting in Brandon, worked with Prescott and the guys as they sighted in their rifles on the 700-yard rifle range.

“We pushed out into the field and headed to the Powerhouse Stand,” Prescott said. “The shoot house was beautiful with carpet, wood walls, tinted windows, and it had an aluminum ramp which allowed me to access the stand with my wheelchair.”

The action didn’t take long to begin as a few does came out on the powerline and started feeding.

“They jerked their heads up and zoomed in on an area and walked over to it,” Prescott said. “All of a sudden they juked left, then right and left the field. As soon as they cleared out a pretty nice-looking buck charged out. It took me all of three seconds to determine I needed to take the shot.”

The buck had a rocking chair rack and sported 8 points rising high above his head.

“Tic-Pow” sounded the custom made 6.5 Creedmore that Marty Puckett builds on a Remington 700 action.

“We were hitting the long-range target at 700 yards with that rifle,” said Prescott. “After I pulled the trigger the buck jumped a couple of steps and disappeared in the brush. The deer had barely made it out of the opening, and my guide Marty Puckett found him pretty quick.”

The 8-point buck weighed 182 pounds and was Prescott’s first white-tail deer hunt and buck kill. The trophy will soon grace his wall at home, and the young warrior was thankful for the opportunity.

“We’ve been taking veterans on gator hunts, deer hunts, and working with men from all walks of life from all around the country,” Jeep Sullivan said. “We started the outdoor adventures in 2012 specifically to help these brave warriors and give them an opportunity to let them tell their stories and experience life in the outdoors and help bring healing to them.”

Last year, Sullivan’s group did 24 events, and they hosted 92 different veterans in 2019 and did over 50 events.

“We set up events all around the country from mule deer hunts, to pronghorn, elk, turkey, goose, alligator and anything we can hunt in a variety of states and venues,” Sullivan said. “We want to engage these guys and help them with multiple events and not just do a one-and-done. We want to help these heroes become ‘whole in the outdoors’ and let them know that there’s a purpose for them to live and not have survivor’s guilt. And we do it all with no charge to the veterans.”

All five wounded warriors who attended this hunt harvested a buck on the three-day hunt, and three of them also harvested a doe.

While the warriors stayed at the Tanglewood Retreat Conference Center, each hunter was hosted by a local landowner during the hunt so that all would have an opportunity to harvest deer on different properties.

“We’ve been hosting special needs hunts for seven years, but this was our first opportunity to work with the Wounded Warriors,” Tanglewood owner Greg Shoemaker said. “We were excited to host these guys, and it’s been three days of hunting, laughing and building relationships, and we look forward to following up with them because they took care of us, and we need to take care of them. It’s been a privilege.”

“We want to do everything we can for these guys because they’ve done so much for us,” said Joe McGee.

“These guys took it upon themselves to spoil us and all of the hosts were great,” Ian Prescott said. “Tanglewood Retreat Center is breathtaking, it’s beautiful. I expected nice, but not this nice. This is like five-star nice, it’s just impressive!”

Thank God for men like these wounded warriors who were willing to lay their lives on the line for us, and thank God for men like Jeep Sullivan, Greg Shoemaker, Joe McGee, Johnny Doerner, Marty Puckett and all of the landowners, guides, cooks, hosts and everyone involved in making the event a success. Carpe Diem!