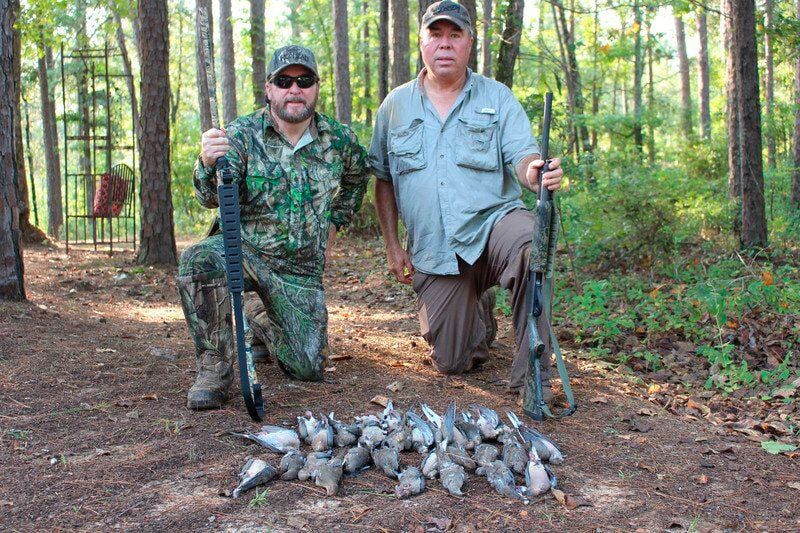 Mike Giles and Ken Covington display a limit of doves that they harvested on a past hunt. 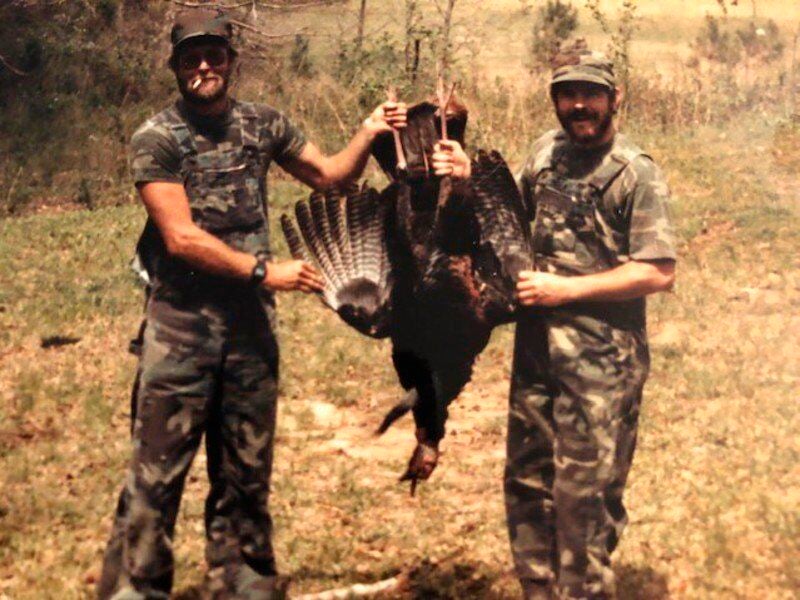 Mike's uncle Jimmy Nolen is pictured on the left beside Wade Anderson. Nolen taught Giles how to shoot doves with two eyes open, and it made all the difference. Years later, Mike called up the first gobbler for Uncle Jim and Anderson.

Mike Giles and Ken Covington display a limit of doves that they harvested on a past hunt.

Mike's uncle Jimmy Nolen is pictured on the left beside Wade Anderson. Nolen taught Giles how to shoot doves with two eyes open, and it made all the difference. Years later, Mike called up the first gobbler for Uncle Jim and Anderson.

A group of doves flew over the Webster County wheat field, shots were fired, and the doves darted away untouched. As a double dropped down into the field, Uncle Jim quickly dispatched both of them with his sharpshooting 20-gauge shotgun. Dove after dove crumpled when they flew anywhere near Uncle Jim.

I marveled at how great a shot he was and longed to learn how to shoot like that, too.

“I can take care of that problem with about two boxes of shells,” Uncle Jim said. “Go pick up a couple boxes and meet me at Elton Road tomorrow afternoon.”

The next afternoon, we drove to Elton Road and stopped at an old dirt pit near the Pearl River. Uncle Jim quickly set up a skeet thrower, and we got started.

Uncle Jim rarely missed a dove and never missed a clay pigeon. After launching 20 clay pigeons and watching Uncle Jim pulverize every single bird from every conceivable angle, I knew I was witnessing something special, something I only dreamed about doing.

“Pawpaw Pat taught me how to shoot with both eyes before I ever shot skeet in the league, and that’s the key to wing shooting,” Uncle Jim said. “That and plenty of repetition and practice is really what it takes to be an expert wing shot.”

After a few instructions about how to raise and position the shotgun to my shoulder while watching the bird fly out in front of me, I shot at and missed a few before finally connecting on a couple.

“Now you’re getting the hang of it,” he said. “Keep swinging that bead past the bird, squeeze the trigger and let that barrel flow right on past it.”

I did exactly as he said, swinging past the bird, pulling the trigger and following up with another shot if I missed. While I missed most of my shots on the first box of shells, the second was much better. In fact, I could hardly believe how good I was shooting with only one practice session and after one box of shells. But I was knocking them down with regularity, and it almost came naturally.

“Now turn around and face the other way,” Uncle Jim instructed.

What in the world is he doing now, I wondered?

“Say the word, and I’ll pull and release the bird, and you turn around and shoot,” he followed up.

I hadn’t a clue as to how I was going to do it, and it didn’t really make sense to me. But I did as he instructed and turned my back to the skeet thrower and requested a pull. As soon as I heard the skeet release, I turned, found the bird and swung my shotgun around and through the clay and squeezed the trigger and creamed the clay bird. After a few more shots and direct hits, Uncle Jim had another test for me.

Surprisingly, it wasn’t much more difficult shooting one bird. You just had to pick up one up pretty quickly and then follow the other one and squeeze the trigger as soon as you got on it. After a few hits on one bird and misses on the other, I finally busted the first one, swung through the second one and busted it. It was Katy bar the door now, and I started busting two at a time.

I could hardly believe my eyes and couldn’t believe that I’d busted bird after bird and was now busting two at a time after turning my back to the skeet thrower. My hit ratio improved drastically using two eyes open after shooting only two boxes of shells. If only I’d been taught how to shoot with both eyes open earlier, I’d have enjoyed the dove hunts infinitely more. But I had now broken the barrier thanks to Uncle Jim and his “secret” of shooting with both eyes open.

But the proof of the pudding is in the tasting, and I’d yet to taste any real wing shooting, and that was next on my list. My challenge would come sooner than I thought. I joined PawPaw Pat on a dove hunt near Eupora. My first dove glided into range with its wings cupped. As it floated into view with dark eyes shining, I swung my Remington 870 around, took a fine bead and touched the trigger.

“Boom!” My first dove crumpled at the report of the shotgun blast.

I had the hunt of a lifetime while picking close shots and taking advantage of birds floating into range as they dropped down to feed. After the smoke cleared, I had harvested my first daily bag limit of 12 birds in only 13 shots. I was amazed as I used the same gun, and nothing had changed except I’d been given instructions that changed my shooting forever. As a result, my proficiency went up almost a hundred-fold.

Thanks to a special sharpshooting outdoors mentor, my Uncle Jimmy Nolen, I’ve been knocking down doves, ducks and deer ever since!