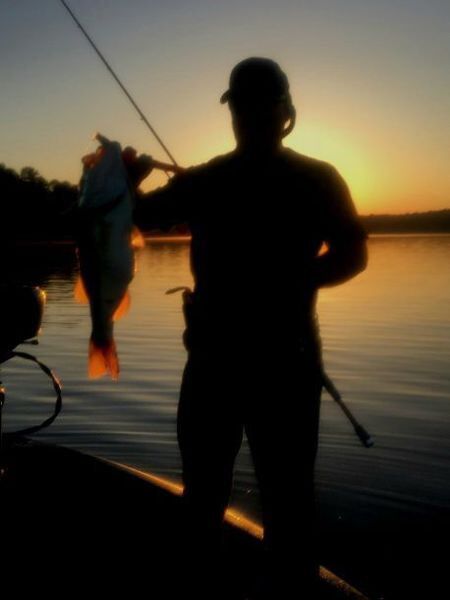 Hot bass action can be found after dark at this time of year. 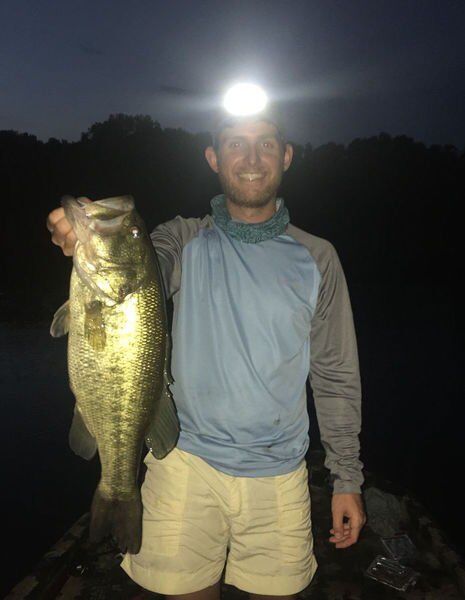 Justin Giles shows off one of his after-dark bass catches.

Arriving at a structure filled cove just before dark my fishing partner and I worked a submerged creek channel with limited success, enticing only a few bass into striking. As the sun disappeared below the horizon the surface activity heated up quickly and an occasional explosion was seen along a shallow stump filled flat.

“I had already tied on a custom made Hoot Gibson buzzbait, with a red and black skirt so I started casting among the stumps and it didn’t take long to draw a strike as a 6-pound bass smashed the lure as it went by a big stump.”

I made a short cast along a stump row and kept progress with the lure’s location by the rhythmic chopping of the blades as it came across the water surface. It was less than 8 feet from the boat when it happened.

“Ka-whoosh!” A bass exploded from the depths and smashed the lure almost tearing the rod from my hands. It was all I could do to hold on as the bass bore down beneath the boat. If you’ve never had an 8-pound wild hawg on your line with only about 6 feet of line out in the pitch-black darkness you’ve missed a treat. I held on and wore the bass down and finally got him in the net and into the boat.

Before our night was over, we’d caught and released six lunker bass that had not been actively feeding until dark descended upon the lake and most everybody had gone home. When they’re zoned in on the buzzbaits after dark the action can be nearly unbelievable.

While bass may actively feed on the surface after dark, there will come a time when the water is so hot that the bass will quit feeding on top but will move up onto ledges and drops and feed along the bottom.

Some of my best nights have occurred when bass move up onto submerged humps with 8-to-10 feet of water on top in the middle of a lake or along a submerged ledge.

I’ll usually anchor down and cast into the deep water and work a magnum 11- to 14-inch Bass Pro Shops Tournament Series worm, or Mann’s Jelly worm up the slope and across the top. If there is structure, I’ll concentrate on fishing that first but it’s not necessary at night as they will move up and feed on the smooth bottom when shad move by.

I’ll start by using a Texas rig and if I don’t catch any near the top of the ledge I’ll switch to a Carolina rig with a ¾ or 1 ounce weight which allows me to work deeper and cover move water faster while keeping the lure in contact with the bottom where the bass are located.

Many times the bass strike when you pull the weight through the brush and the worm comes through and over the limbs, or over the top of the ledge. Usually they strike aggressively, and you’ll feel the thump, thump and then they’ll start moving away.

Don’t forget the net, or fish grips and hook remover. If you catch a monster bass after dark it will be a chore landing him in the pitch black so bring that net. After you land the bass you’ll need to hold him tight and there’s no better grip than a Bass Pro Shops Lunker Lock Gripper and you’ll need a hook remover as well to keep your hands free of those treble hooks or sharp worm hooks.

If you want to catch lunker bass during July, then try a few of these proven tips and techniques after dark.