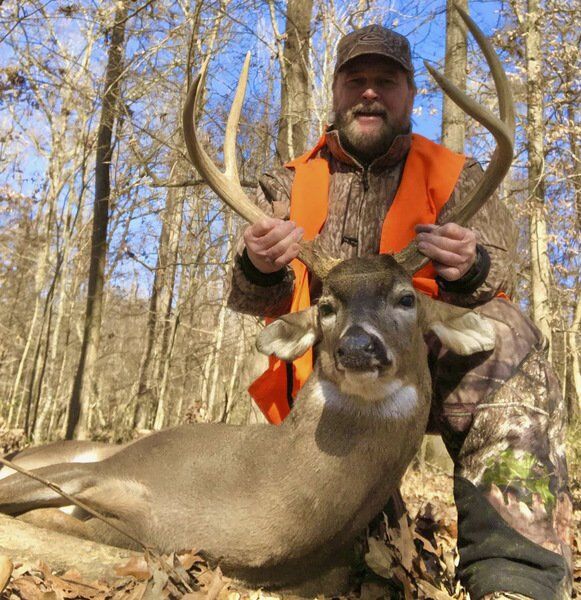 Public Land Buck: Bass Pro and Drake Elite Team member Mike Giles harvested this 200-pound 8-point buck which sported a 21-inch spread near Port Gibson on the bluffs overlooking the Mississippi River recently. The old warrior was nicked up from fighting and had tines broken off and was aged at 6.5 to 7.5 years old. 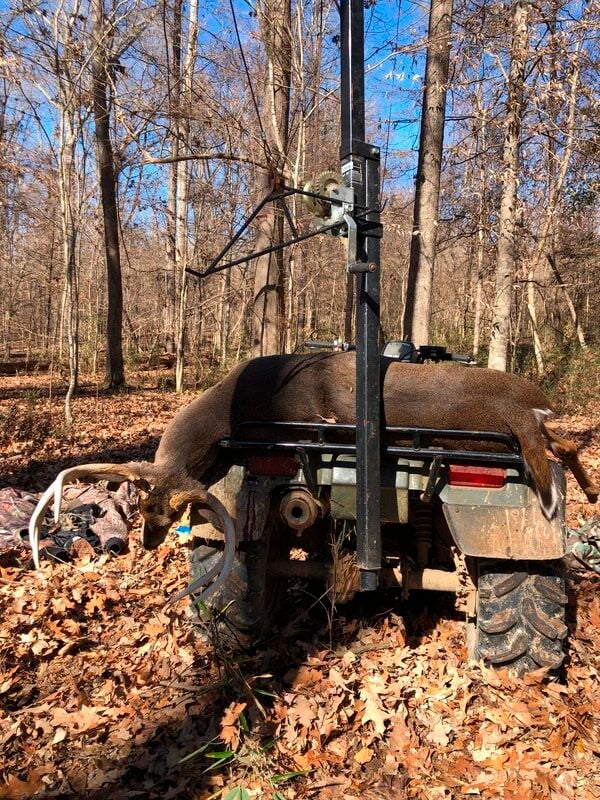 My anticipation was running high and adrenalin flowed freely as I drove by the famous Windsor Ruins on the bluffs overlooking the Mississippi River last week. Anticipation rarely meets reality, but the mere fact that I’d hunted along the Mississippi River with my Pawpaw Pat Nolen and Uncle Jimmy had me brimming with electricity and expectation. We’d harvested many deer on the “32” Club back in the 1980s. In fact, my last hunt there with my Pawpaw was a muzzleloader hunt, and we both scored on deer with our old Hawkins Black powder muzzleloaders.

Being able to hunt the WMA was like being on hallowed ground to me, and I had traveled the entire width of the state to experience the hunting in the Loess Bluff Hills of the Mississippi River west of Port Gibson. My emotions were also running high due to the fact that my deer hunting career had begun here some 53 years ago at Hillside Hunting Club. Hunting with Uncle Jim and Pawpaw Pat back then and now coming back so many years later made it really special to me. These larger-than-life men took up time with me and taught me the ways of the woods and how to find sign and harvest the wild deer.

It’s difficult to imagine that civil war battles raged in these steep bluffs and near bottomless ravines, but it happened during the war. It was almost unfathomable that whitetail deer have thrived in the rugged landscape.

Scouting time was limited, but I’d put in three days of scouting and reconnaissance earlier and now had three days to hunt. Day one was rough with 35- to 40-mph winds and 40-degree temperatures. I’d seen a few deer but nary a buck, so I set my sights on a swamp bottom that I’d found loaded with acorns, hog rooting and buck sign.

I donned my day pack filled with snacks, water and other essentials and entered the dark swamp at the crack of dawn as I planned to spend day in the creek bottom. I’d gone only a short distance when I stopped and waited for daybreak.

Squirrels were cutting acorns and scurrying around as I watched expectantly for the flick of a tail or glint of an antler. As soon as it got light enough to see clearly, I began my hunt walking stealthily, putting down one foot at a time and counting one, two, three, stop. Then I scanned the horizon from left to right and repeated, moving as slowly as possible to avoid detection. The plan was to slip along silently and work my way to a scrape line without disturbing the deer.

Easing to a stop again, I remained motionless as water oak acorns dropped from a tree a short distance away. I spotted my stand sight about 75 yards to the north and eased to a tree at the edge of a thicket.

I climbed up high enough to view the open oak flats to the left, a cane thicket in front and foothills to the east. The thicket was about 30 yards wide and ran north and south from left to right. I’d found fresh buck rubs and scrapes while scouting the week before. The time was 10 a.m., and I settled into the stand and listened to a hawk screech as it swooped down on a squirrel.

Somewhere across James Creek a deer snorted for what seemed like an eternity. They were about 300 to 400 yards upwind and not a concern to me. After about 30 minutes in the tree I’d lost myself in the sights, sounds and smells of the woods and thanked God for being in such a place.

Suddenly I detected movement about 100 yards to the north as a deer came over a rise and into the thicket, antlers protruding from behind an oak tree as he disappeared. Where he went, I didn’t know but I could see either side of the thicket, so I waited with rapt anticipation until I saw another movement and detected a doe about 30 yards ahead of the buck.

Her path would bring her 20 yards to the left of my tree, and I watched as the buck went through an opening, which gave me a view of the wide rack — definitely a shooter on this public land WMA hunt. As the buck approached, he never took his head off of the ground as he trailed the hot doe.

I kept my crosshairs on the buck waiting for the opportunity at a shot as the doe passed to my left, just upwind of me about the same time the buck walked into an opening.

“Tic-Boom!” The .270 Remington roared, and the buck crumpled instantly and never twitched as I reloaded and watched for five minutes, but the old warrior was not getting up.

I don’t remember coming down the tree but when I got down, I was floating on air as I hurried to where the buck lay. What an awesome sight it was to see such a fine specimen with antlers stretching high above the ground. The 200-pound trophy buck sported a rocking chair rack, a 21-inch spread and a massive 8-point rack with 24-inch main beams and 5 ½ and 6-inch bases. The buck was aged at 6 1/2 to 7 1/2 years old.