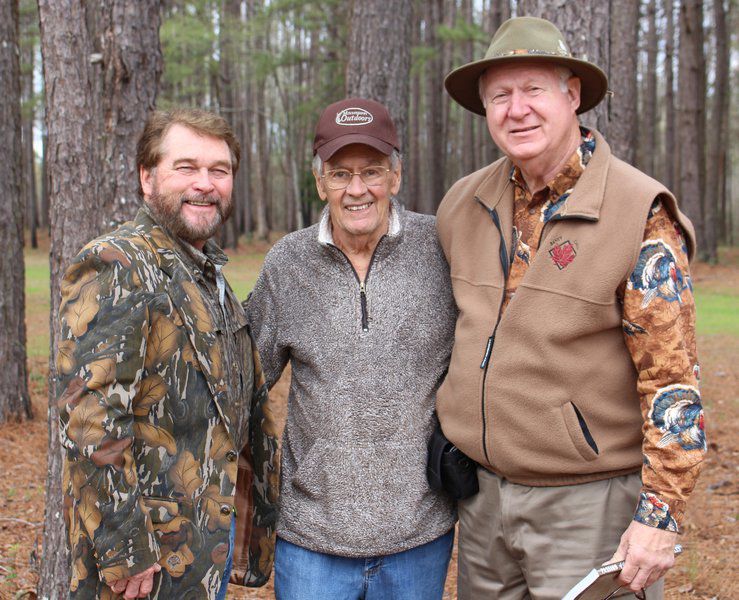 Melvin Tingle, center, reminiced about the good ole days with Mike Giles, left, and Mark McPhail shortly before his induction into the Mississippi Outdoors Hall of Fame a few years ago. 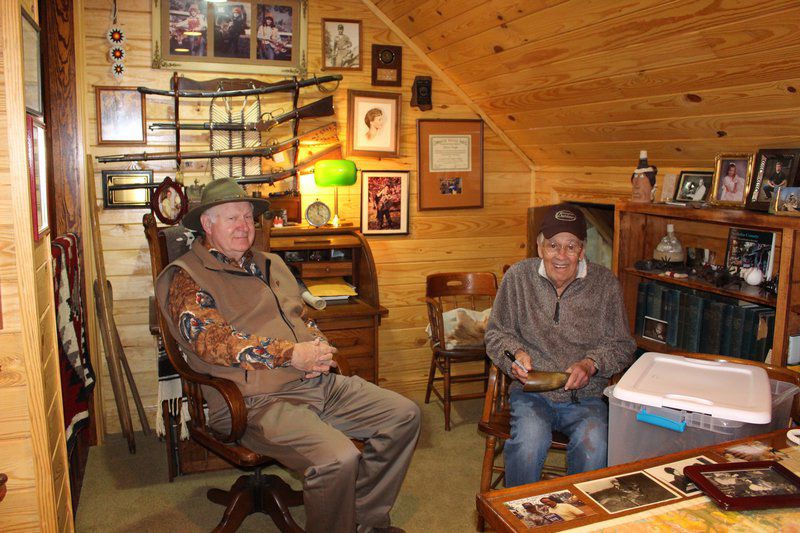 Melvin Tingle, right, joined Mark McPhail in his special outdoors man cave signing books, bullhorns and other memorabilia that is now in the Mississippi Outdoors Hall of Fame. 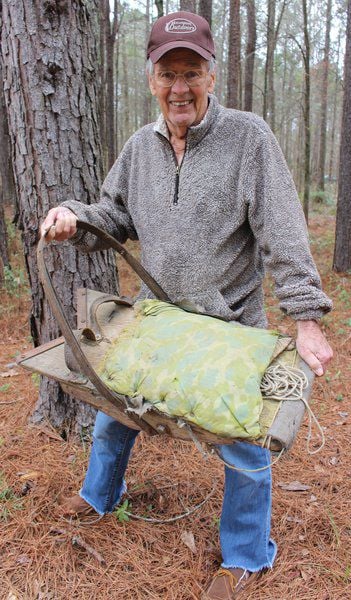 Melvin Tingle displays the custom made climbing stand that he made and used to harvest deer back in his younger years.

Mississippi has long been known for its rich cultural heritage and bountiful outdoors and it has produced some of the world’s most famous writers, athletes and talented people. Over the course of his lifetime there was no star that shone brighter than Melvin Tingle, of Decatur.

Mr. Tingle died on Oct. 18, but his legacy will live on among many people in the Magnolia State.

“This is the greatest day of my life,” he said, upon accepting his award.

“There was one driving force in my career,” Mr. Tingle said. “I loved to hunt and fish and I loved people.”

If you’ve ever been around him or have seen him on television that fact would be readily apparent. In fact,  Mr. Tingle spread his love of the outdoors in many venues and locations around the state over a lifetime.

“Because of Billy Joe Cross and God’s direction it was a dream come true,” Mr. Tingle said. “Billy Joe hired me and then it got even better. Any time you get with a group of sportsmen they’re the elite people in the state and there’s just a joy camaraderie when you’re together. You could have a millionaire and a good ole boy who doesn’t have a lot of money, but they both have a love of the outdoors and there’s a connection.”

Mr. Tingle made that connection with young and old, rich and poor alike and he never changed from the young man who had a love for the outdoors and people, too.

“I grew up hunting rabbits and squirrels, in the Hope community in Neshoba County,” Mr. Tingle said. “Mississippi is just the greatest place you can live. I never aspired to be rich and you don’t have to be to live a full life here. You can just hit the woods or waters and go do it. That’s my philosophy.”

One only had to listen to Tingle to see that he still had that fire and love for the outdoors and the people in his final years.

“I love my state and I love Mississippi people and I’ve always felt we got a bad rap,” Mr. Tingle said. “I just don’t see how people can live in New York, or Chicago, or in some of those big cities in California.”

Over his career it was hard to know if he was working or playing as he spent time in front of the camera in the woods and on the waters of our state while fishing and hunting.

As a young man he killed deer with just a stick and string from a homemade climbing stand no less. He’s chased rabbits in East Mississippi, shot ducks and doves and caught bass in the delta and caught fish all over his beloved state. You name it and Melvin Tingle did it in Mississippi. He was an outdoorsman who parlayed his love of the outdoors and people into a lifetime of achievement where every day presented a new challenge and opportunity.

Although Mr. Tingle passed on this week, the memories of his adventures remain a cherished part of Mississippi’s outdoor heritage. Mississippi Outdoors will forever be linked to this special Mississippi outdoors ambassador, Mr. Mississippi Outdoors himself – Melvin Tingle. Thanks for living a life spreading your passion for your faith, people and positive things in the outdoors.