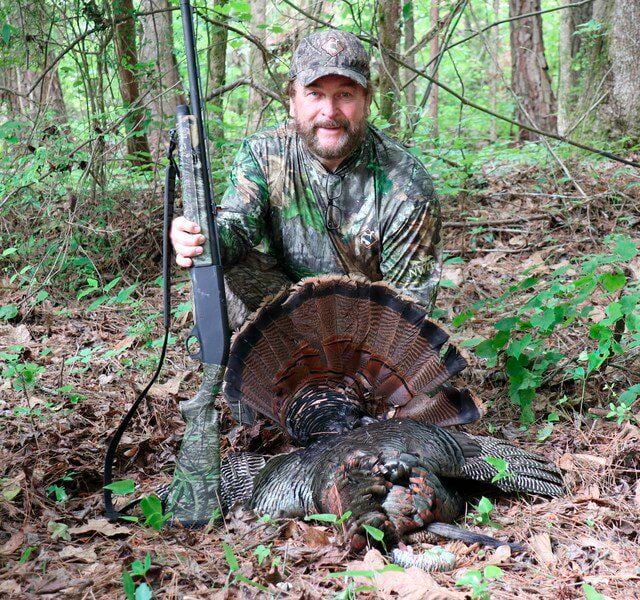 Mike Giles harvested this last-minute gobbler on his final hunt of the season while hunting in some of the legendary Jack Dudley's home area in Kemper County using his tactics. The author harvested the gobbler with the new 20-gauge Mossberg turkey gun. 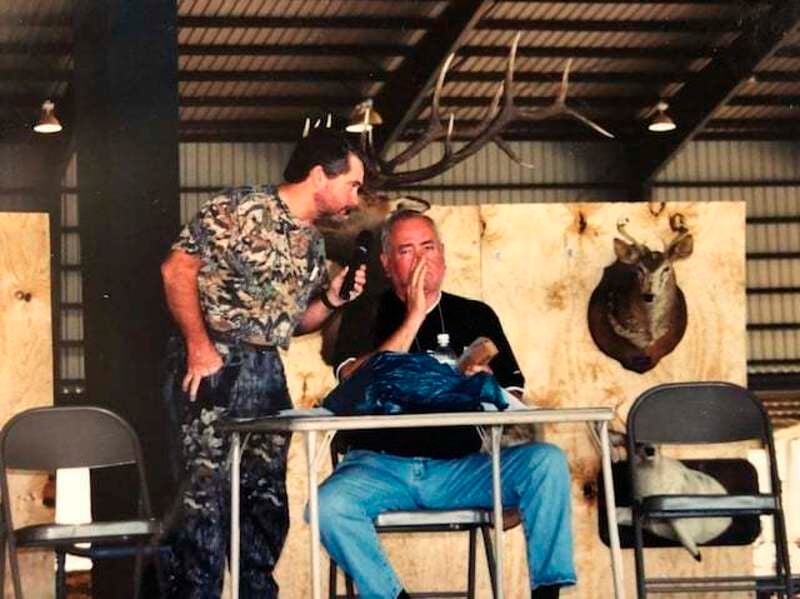 Mike Giles is pictured with former World Champion turkey caller Jack Dudley of Dekalb back in the early 2000s at an outdoor show seminar in Meridian. Jack invited Mike to talk turkey on stage with his natural voice while he called also. Dudley was a "natural voice" mentor to both Preston Pittman and Mike Giles.

Mike Giles harvested this last-minute gobbler on his final hunt of the season while hunting in some of the legendary Jack Dudley's home area in Kemper County using his tactics. The author harvested the gobbler with the new 20-gauge Mossberg turkey gun.

Mike Giles is pictured with former World Champion turkey caller Jack Dudley of Dekalb back in the early 2000s at an outdoor show seminar in Meridian. Jack invited Mike to talk turkey on stage with his natural voice while he called also. Dudley was a "natural voice" mentor to both Preston Pittman and Mike Giles.

As the final hours of turkey season wound down in Kemper County, I couldn’t help thinking about one of my turkey hunting mentors, the legendary Jack Dudley from Dekalb.

Dudley, Mississippi’s first natural voice world champion, was responsible for my natural voice calling passion, and I killed the first gobbler on which I tried it. Over the next 40 years I have yelped, clucked, gobbled and owl hooted around the country both in the woods and surprisingly at wild game dinners, speaking events and at seminars.

I’d entered some of Dudley’s old hunting grounds on the final morning, and he was on my mind as I made a long trek to a ridgetop to listen for a gobbler. I wasted no time after arriving near my listening spot before belting out the old familiar owl hoot refrain: “Who cooks for you, who cooks for you-all!”

“Gobbbbllllleee!” Thundered an old gobbler in a lusty response, a challenge to all suitors and a come-hither enticing invitation to any available hens.

I quickly found a tree on the ridgetop and sat down with my back safely in front of the tree while pulling my knees up to a comfortable position and ready for battle. The gobbler shock-gobbled in response to my natural voice owl hoot, but he was now belting the gobbles out every two to three minutes and occasionally two to three times each minute. The gobbler was red hot, but the challenge was to play it close to the vest and not get impatient.

When it got near to fly down time about 6:15, I took my cap off and simulated a turkey fly down by whipping the cap up and down on my leg. Shortly afterward I sent out a tree yelp, purred and clucked very low.

“Gobble, obble” responded the tom in a quick response.

As I waited for the gobbler to fly down any minute and commit suicide, I thought about a similar hunt I’d had with Dudley when he gobbled so realistically behind me that I thought the bird had circled us from behind. By 7:15 I thought for sure the gobbler would be down, but he was still in the tree gobbling almost incessantly.

I called in my re-enforcements and pulled out my Lewis Stowe trumpet call and sent out a raspy “yelp, yelp, yelp, cluck, cluck cluck.”

“Gobble, obble, obble,” screamed the old gobbler in a quick retort, cutting me off before I even finished my run. I readjusted my sitting position to get comfortable, as it wasn’t going to be as easy as I’d thought.

Suddenly, I spotted a couple of hens working their way toward me, and I watched as they pecked around looking for the unseen hen who’d called out. After about 15 minutes they took off running, lifted off the ground and sailed towards the gobbler lighting between him and me.

“Yawk, yawk, yawk!” sounded the raspy old hen, followed by a thunderous response from the gobbler.

Every time he gobbled the hen would cut him off by yelping right on top of his call.

She was hot and ready, and he was getting red-hot.

I believe less is more, so I don’t usually call to an old gobbler very much, especially while he’s on the roost — and believe me, it was hard to keep quiet in all the raucous commotion. But I thought I was where he wanted to be, and if the hens played their hand right, I would be in the perfect position.

Suddenly, it got quiet, and I knew he was either leaving or coming down. I could barely hear his gobble as he flew down into a deep hollow. I was afraid he was going away, but the hen belted out a lusty response, and he quickly answered. This went on for a few minutes until he topped the ridge and sent out a thunderous gobble.

Game on! Suddenly, a hen appeared about 30 yards to my right before walking over the ridge top. Seconds later, another one sailed out of the tree and lit in almost the same spot before disappearing over the ridge.

“Yawk, Yawk, Yawk” sounded a raspy response from the old hen, who was also down and bearing down on me slightly to my left. Should I turn toward her, or keep my gun aimed toward the right where I thought the gobbler would arrive? His gobbling response about halfway towards me gave me the answer to stand pat.

I took a fine bead through the sights of the Mossberg 20-gauge turkey gun as I spotted him strutting towards me through the timber. As the hen yelped to my left the gobbler kept coming while emitting thunderous gobbles. I’d picked my spot, and as the bird came into view kept my bead on his head waiting for the moment of truth.

I yelped again and the gobbler locked up, stretched his neck high looking for the unseen hen just as I touched the trigger and squeezed off a shot at 8:00 a.m.

“Boom!” Roared the Mossberg 20-gauge, and the gobbler toppled forward with wings widespread, never even twitching. I sprang up and was on top of the old bird with my foot on his head as hens flew in all directions. I picked him up by his feet and retreated to my set up spot, laying him down and resting for a few minutes while thanking God for another opportunity to walk in the footsteps of a legend and tangle with a wise old battle-weary gobbler.

Thanks, to the legends Jack Dudley, Lewis Stowe and Tony Ezolt, I’d won another turkey-calling contest with the ultimate judge and closed my season out in style!