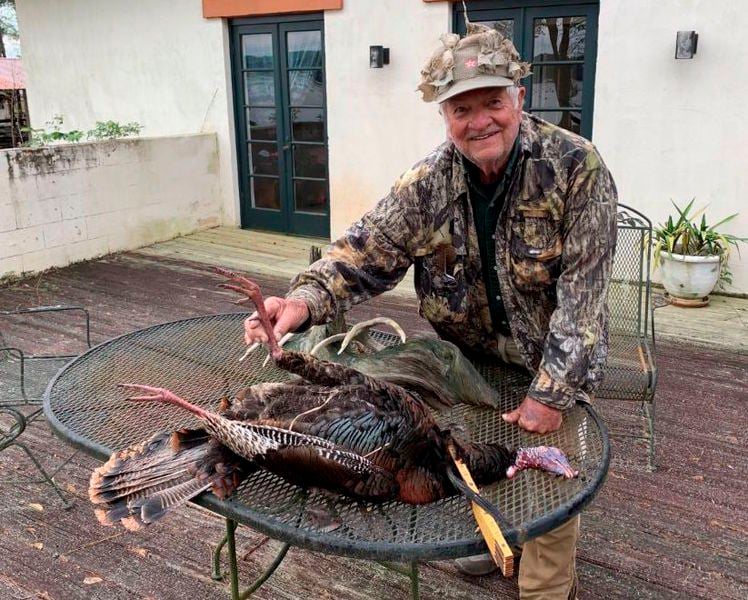 George Arrington carried on his family tradition of turkey hunting, which started with his own father, George Lamar Arrington,  with the harvest of yet another trophy gobbler recently. Arrington’s gobbler sported a 10-inch beard and long sharp spurs. 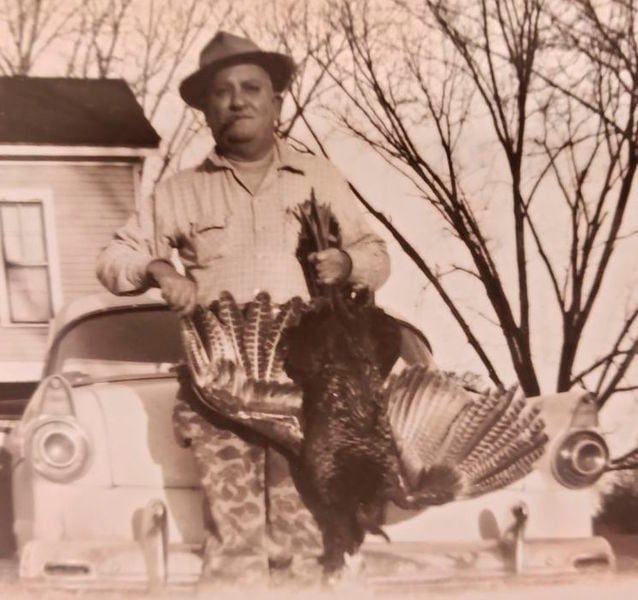 Dr. George Arrington is a veteran of many turkey battles, but he’s still excited about locking horns with wise old gobblers each time he enters the springtime woods. Last week he joined a couple of his turkey hunting friends from Auburn, Alabama on a hunt in Jasper County. Arrington left both of his guests in prime hunting spots and then went looking for a gobbler of his own to challenge.

Arrington was raised by a noted turkey hunter in his own day, his father, George Lamar Arrington, who was featured in Field and Stream in 1961 by the acclaimed outdoors writer Charlie Dickey, in one of his stories about hunting with the prominent doctor and hunter.

Arrington inherited a full blown case of the turkey virus or disease as it has come to be known so it should come as no surprise that he’s still chasing the gobblers in his retirement years and enjoying every minute of it.

After setting up near the Pear Tree field Arrington didn’t get a response from his calls so he crossed the field and went to the edge of a pipeline near the Hawk’s Nest around 7:30.

“I set up on the edge of a ravine and called and a jake tried to gobble in response,” Arrington said. “I figured I might as well mess with him awhile, so I called some with my box and slate and first thing I know a different gobbler gobbled across the gully from the Hawk’s nest. I thought, well he’s not going to come up this gully and I’m not going over there either so I might as well play with him awhile. He went on to the right and I waited about 10 minutes and called again.”

“Another one gobbled where the jake had been and it sounded like a better gobbler,” Arrington said. “Surely he didn’t learn to gobble that quick so that other gobbler must’ve walked back up that way I thought.”

“While I waited, I decided to sand my slate and when I did, I heard a sharp cluck and looked up on the hill and saw a turkey I thought was a hen. I thought my hunt was over then, but I figured since I had my slate I might as well yelp on it, so I did, and he gobbled right back at me. So it was a gobbler and a hen.”

Arrington had fired that gobbler up and he was coming down the hollow and making a beeline up the gully toward him.

The gobbler kept coming straight for Arrington thundering gobbles to let him know he was King of the Woods and on his way.

“I just waited to see what was going to happen as the gobbler got closer and closer,” said Arrington. “Finally he was almost on top of me, so I got ready for him.”

The tension mounted as the gobbler took his time getting to Arrington, but the veteran hunter was locked and loaded and ready for the moment of truth. As Arrington heard footsteps of the unseen gobbler, he squeezed his safety off and aimed his gun in the old tom’s direction.

“Just as you think you’ve got them figured out, you’ll get humbled again,” said Arrington.

But on this spring morning, all was right in Arrington’s world as he’d felt the thrill of victory once again!