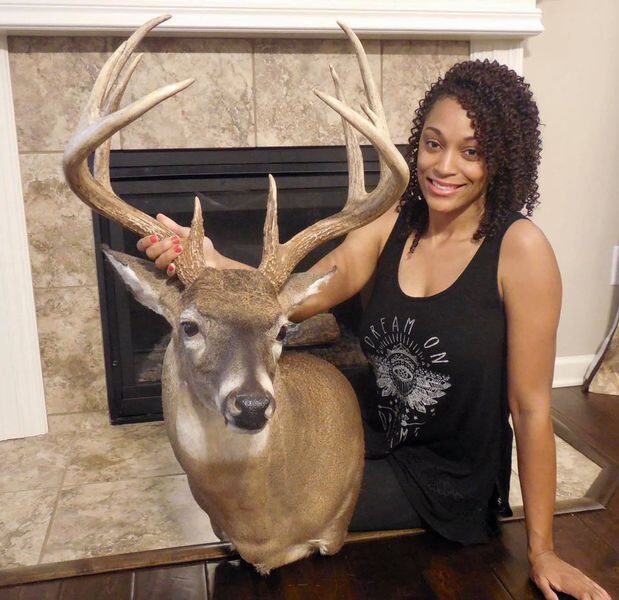 Although this 150-inch class, 240-pound buck would have been Henry Woodard's best buck, he was honored to watch his bride, Lakeisha Woodard, bag this buck of a lifetime! The couple form the inspirational team of Halo Chronicles. 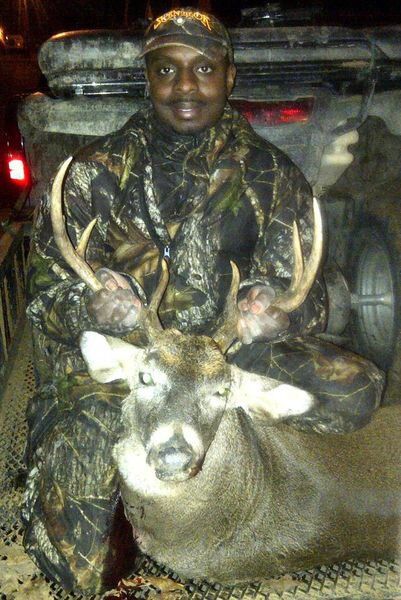 An avid hunter, Lakeisha Woodard spotted a group of does feeding toward her stand.

“We saw a buck chasing does back and forth through the bottom and just like clockwork he came walking right behind the does,” Lakeisha Woodard said. “He circled around with the does in front and I thought, this is the moment of truth.”

“Thwack!” Woodard took the 30-yard shot and killed the buck of her lifetime!

“She nailed him,” Henry Woodard said. “That was the moment of a lifetime and we were all really excited. She’s the big hunter in our family.”

Henry and Lakeisha Woodard form the nucleus of Halo Chronicles, an acronym for Henry And Lakeisha Outdoors, which chronicles their outdoor hunting pursuits. The husband and wife hunting team from Olive Branch are inspirational figures who stand out in the outdoors world and introduce people from all walks of life to hunting.

“Bow hunting is very special to us whether you use a compound bow or crossbow,” Henry Woodard said. “I think it’s really special because it makes you a better hunter. You have to get much closer to the deer and you can’t make a mistake or the game’s over.”

When it comes to bow hunting basics the Woodard’s start out with the end game in mind and that’s beating that old buck’s nose when he comes into range.

“We view scent control a little differently and we begin our preparations before the season starts,” Woodard said. “We begin taking supplements to help control our odor before the season even starts. We take Scent Shield Chlorophyll tablets that have chlorophyll, alfalfa and parsley. It’s an internal deodorant that reduces your scent.”

“It’s very important to keep your scent down,” Woodard said. “You want to fool a deer senses and that means taking every precaution in keeping your scent to a minimum while also using cover scents or attractants in the area you hunt.”

“A buck wants food and security so that’s on our mind when we start planning early season bow hunts,” Woodard said. “We’ll pull up a map and check out likely looking spots and bedding areas.”

“We’re looking for pinch points and bottlenecks and areas that make a natural funnel where the deer travel undetected,” Lakeisha Woodard said. “Game cameras come in handy to see where the deer are coming from and where they’re going.”

During the preseason, they put out minerals to check on deer coming through the area. By using the minerals, they can get game cam photos without attracting a lot of different animals.

“Most of the time a mature buck is not going to come to the green fields and food sources during the day in heavily hunted areas,” said Woodard. “If a buck is coming in at night we’ll just back up our cameras and catch him coming or going on the trail cam and we’ll determine the times they like to come through and then cut them off before they get to the food, or attractants.”

“On our home properties and hunting areas we put our stands up way in advance of bow season,” Woodard said. “We don’t want to leave any more scent in the area than we have to when we’re going in to hunt and the best way to keep your scent down is to stay out of the area until we’re ready to hunt.”

By hanging stands and making preparations before the season the Woodard’s are ready to hunt when the season actually gets here. They put the work and scouting in during the preseason and reap the benefits when the season opens.

“We’ll cut grass and make paths to our stands, raking leaves and picking up sticks and cutting overhanging branches and moving things out so we can access our stands with little disturbance while eliminating our scent,” Woodard said.

“Some areas are more conducive to bowhunting than others,” Woodard said. “We didn’t have a dad to pass down the deer hunting heritage to us, so we watched a lot of Primos’ DVD’s and learned a lot from that. I’d recommend watching as many videos as possible if you’ve never had someone to mentor you.”

These days hunting is a family affair and all of the Woodard’s are getting in on the action as their children have harvested some great bucks as well. Perhaps more importantly Henry and Lakeisha want to spread their inspirational message to the world.

Check out Halo Chronicles online atwww.halohunting.com/ or on Facebook.