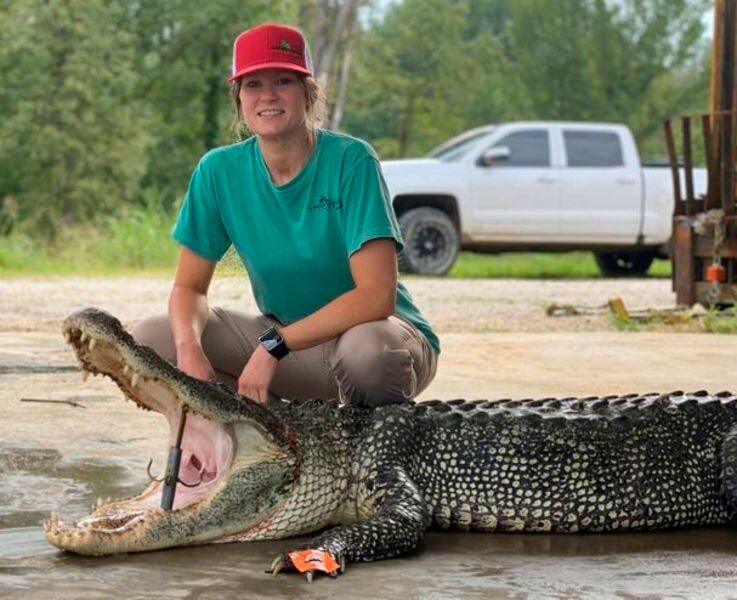 Krystin Waller killed this monster gator that measured 10-foot, 5-inches, with a belly girth of 44.5-inches. 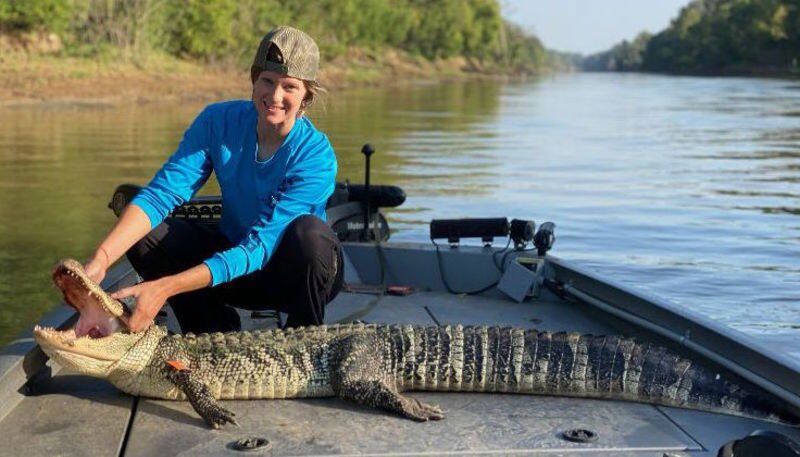 Krystin Waller with her "runt" gator.

Former Clarkdale High School student Krystin Waller is fearless when it comes to the outdoors and she relishes the opportunity to hunt anything that walks, swims or flies in the Magnolia State. It should come as no surprise that she would hunt and wrestle massive alligators.

Waller was drawn for a gator hunt again this year and had an opportunity to harvest a “runt alligator,” which would be less than 7-foot long and one mature gator over that length.

Since the state’s alligator population has exploded and they were becoming a nuisance eating pets and attacking people in some instances. Their numbers had to be reduced.

“This year my goal was to harvest both alligators and fill my tags,” Waller said. “I wanted a huge runt gator to beat my personal best and I wanted to top my season off with a monster gator, too.”

Waller quickly caught and dispatched a 6-foot-11 5/8- inch runt the first night out.

“I was fortunate to hunt with a strong team led by Hunter Parrett and Joey King,” Waller said. “Gator hunting is truly a team effort and it takes everyone pulling together to be successful.”

“On the second night out we pulled up to a gator known as Longhead,” King said. "I had located this gator back in 2016, and my dad hunted him one night in 2018. Well, Friday night we pulled up and saw him again and the hunt was on.”

It took a few hours before they could get close enough to get a good cast on him. As part of the rules you must hook the gators before you dispatch them, to make sure you don’t lose them and then harvest more than one gator. That entails hooking him and wearing him down and bringing him to the boat, just like a large catfish. It is sho-nuff dangerous.

“We stayed on Longhead from 11:30 to 4:45,” Waller said. “Each time we’d approach him he would dive and stay under about 15 minutes. He played cat and mouse with us for a long time until we got close enough to make a good cast.”

As soon as they hooked up with the gator, it exploded through the water and dove down to the depths with Waller holding on for all she was worth. With the gator pulling hard Waller slid across the boat deck and narrowly averted being pulled overboard.

“That gator pulled the 20-foot Lowe boat around like it was a cork floating on the water,” Waller said. “I was using the Gatortaker hook to catch him and it took three hooks, a harpoon and two snares to finally subdue him and get him to the boat.”

As soon as the gator was in position Waller knifed the big gator and then followed up with a quick .410 shot for good measure.

“After getting only three-hours of sleep in 48 hours, and after hunters spending four years trying to catch this one, I finally filled my big gator tag and harvested my personal best at 10-foot, 5-inches, with a belly girth of 44.5-inches and a tail girth of 31-inches and he weighed 452 pounds,” Waller said. “It was all I could do to hang on and stay in the boat.”

Waller took the monster gator to Red Antler Processing near Yazoo City and she plans on munching down on some fine gator sausage this fall and winter. She’s also getting the hide tanned so that she can utilize the gator skin and make some custom items as well.

There’s nothing quite like hunting man-eating gators in Mississippi. They’re about the only thing we hunt that could maim or kill you. But Krystin Waller is one young lady who is up for the task!

Sarah Virginia McMillan Perritt, 83, of Quitman, Miss., passed away Sept. 25, 2020, at Anderson Regional Medical Center. She was born Oct. 26, 1936, to Douglas and Ruth (Smith) McMillan in Clarke County, Miss. Sarah was a member of the Meridian Church of God and later in life a member of the…