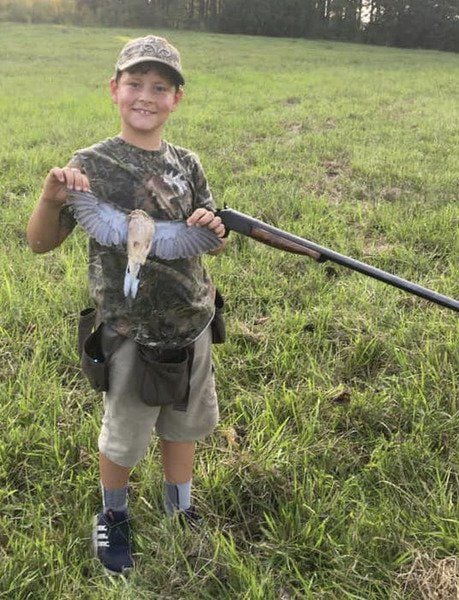 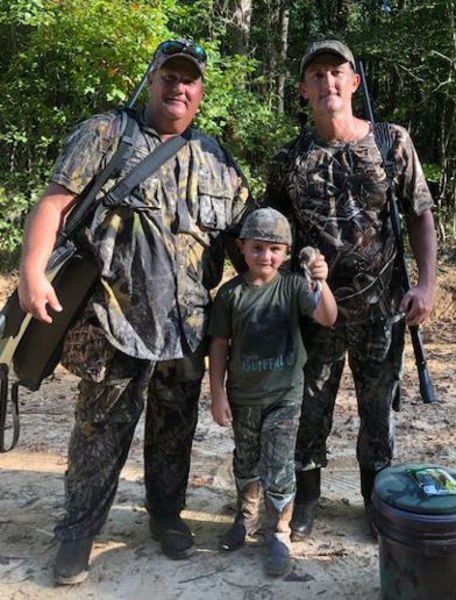 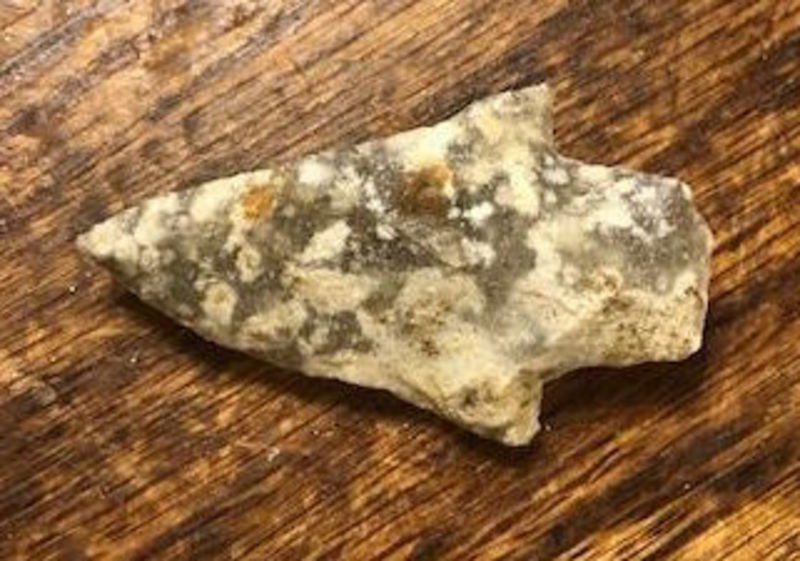 Mike Giles found this arrowhead on a recent dove hunt.

Anticipation soared as a group of hunters gathered in the pre-dawn darkness near Daleville on a recent Labor Day hunt. Adrenalin pulsed through my veins much like that of a rutting buck as I tried hard to calm myself for the opening of the fall hunting season. Memories of prior hunts flooded my mind as the hunters arrived in the stillness of the night.

I had gotten my first glimpse of antlers and harvested my first buck no more than a mile to the east of this dove field on a pine ridge near the Sam Dale Monument. Five years was a long time for a youngster to wait for his first crack at a buck and I’d sealed the deal when he finally pranced by me, on Christmas Eve.

Though we were hunting doves now, the memories were still so thick I could almost see them in vivid colors on that frigid morning so long ago.

Dove hunting is feast or famine and the memory of another fantastic dove hunt only a mile to the north came to mind. I’d taken a stand with Ken Covington and the doves swarmed our hilltop stand like mosquitoes. The birds dive bombed us from all directions as we stood back to back firing almost nonstop for 30 minutes before we shot our limit and it was over.

As the eastern sky turned an orange hue and the first few minutes of dawn arrived a thick fog rose up in the lower part of the field.

Ka-boom roared a shotgun and our season began.

“Bird, Bird” yelled a hunter from across the field.

Pow, boom, boom, boom, sounded the shotguns as the doves flew into the field. Hunters blazed away as some the doves made their way across the field drawing fire from hungry hunters below.

Suddenly a pair of doves appeared right in front of me, so I quickly picked one out and squeezed the trigger.

Tic-boom! Boom. Boom. My first bird folded up and fell as two other doves whirred by drawing my fire. The doves came in groups of three to five and the field lit up like roman candles as shotguns blazed away.

One of my doves fell across a ditch so I went to retrieve him after the action slowed. As I crossed over the ditch bank a shiny object caught my eye and to my surprise, I spotted a perfect arrowhead. I picked the ancient Indian broadhead up and marveled at the beauty and functionality of the still sharp and deadly point.

As I rubbed the arrowhead, I suddenly had a vision of an experienced Indian hunter slipping up on a deer in the swamp bottom. The buck appeared in the mist walking with his head down, unaware of the silent warrior watching him.

As the buck stepped across the stream and into a small opening the warrior drew his bow and released the arrow.

“Thwack!” The broadhead smacked the buck and the ancient hunter scored on a meal that would help feed and clothe his family. The succulent meat would provide needed food for sustenance and the skin would provide much needed buckskin for clothes.

“Mike, Dove, Mike, Dove coming in from behind you,” shouted Ken Covington.

I spun around and swung on the bird and squeezed the trigger and it crumpled up midflight and fell to the earth.

For the next 30 minutes the doves flew over from all sides and I fired volley after volley. The field was on fire and it sounded like a battlefield with bursts of gun fire coming from all directions.

Suddenly three doves flew over me from the west and I shot the lead dove, folded him up and dropped the second in one motion and my day was done.

Counting my blessings as I picked up the last bird that filled my limit, I couldn’t help but think back to the arrowhead shot by another skilled hunter and wonder how many more hunters would walk in our footsteps. Will our hunting heritage survive modern day living? I pray that another generation of hunters will continue to enjoy our bountiful earth and continue to manage it properly. For the further we get away from the soil, the outdoors, the further from reality. May God Bless America forever.

Graveside services for James Michael Brand will be Wednesday, July 8, 2020, at 11 a.m. at Chunky Cemetery in Chunky, Miss. James F. Webb Funeral Home is honored to assist the family with these arrangements. James Michael Brand, 52, of Meridian, Miss. died Sunday, July 5, 2020, at Anderson Re…

Arrangements are incomplete at Berry and Gardner Funeral Home for Mr. Willie Smith, 79, of Meridian, who died Monday, July 6, 2020, at The Specialty Hospital of Meridian.

Arrangements are incomplete at Berry and Gardner Funeral Home for Ms. Willie Lang, 84, of Meridian, who died Friday, July 3, 2020, at her residence.