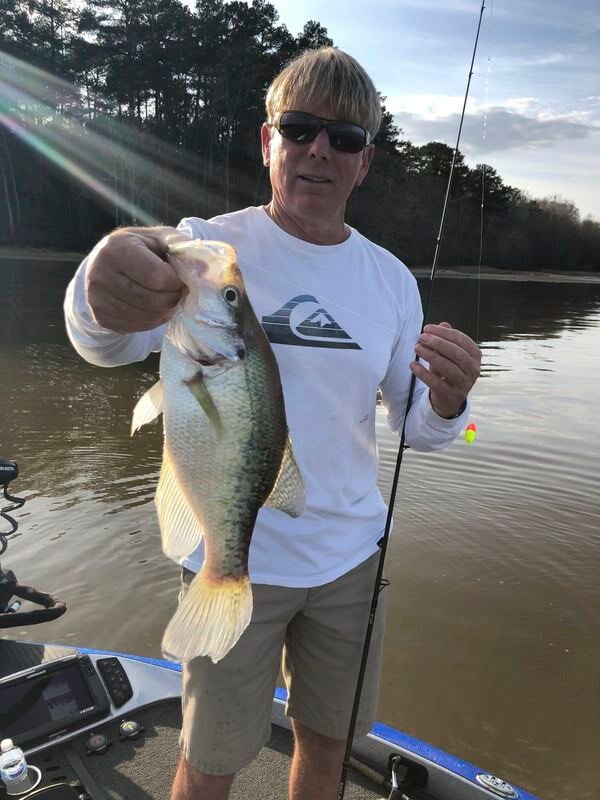 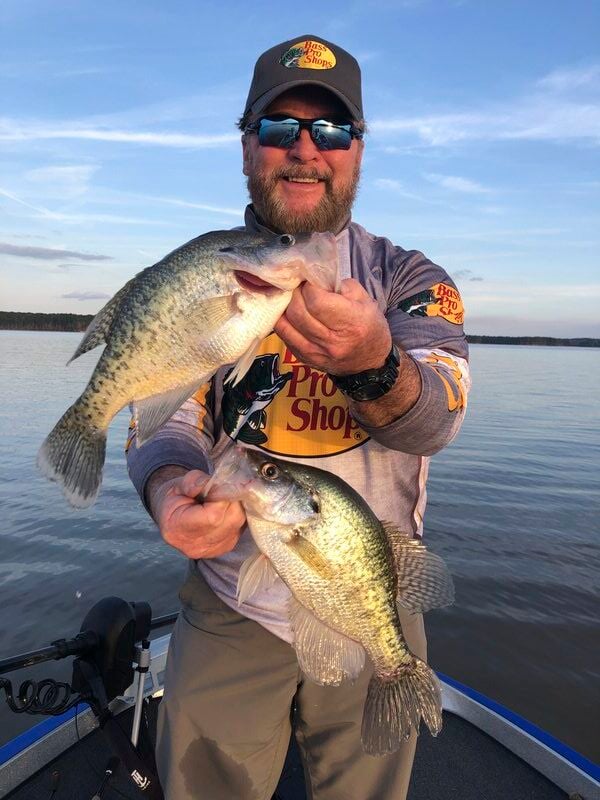 Ken Murphy Danced a jig as he worked it around visible and submerged stumps on Okatibbee Lake recently. Twitching his jig and cork rig, Murphy stopped by a lone stickup and a crappie struck hard, and his first crappie of the day was history. Murphy kept dancing the jig and cork rig and around shallow water structure and caught several more on one spot before moving on.

The lake was muddy as chocolate milk, and the crappie wanted the black and hot pink jigs, and they were really sucking them in. On several occasions, Murphy would cast to a spot and catch a perch, and I’d cast right behind him and catch another one from the same spot. We did that multiple times before the action slowed.

Murphy was actually working a stump field that was visible due to the low water. With so many choices it would seem difficult to determine where the fish were at in the stumps, but that wasn’t the case on this day. When the water is low it seems that the crappie always work one part of the stump field, and we would catch four or five and have to cast to another spot after the bite slowed.

After a few minutes, the crappie would move back in there, and we’d harvest a few more. On this afternoon I’d met Murphy at the ramp after work, and we spent the last couple of hours catching crappie. Though we started late in the afternoon, the bite got better the later it got, and the action really heated up.

My grandfather J.P. Nolen taught me how to crappie fish with jigs, and we caught the crappie from the Ross Barnett Reservoir’s main lake and spillway areas. An average day would include a limit of 1 ½ pounds of crappie, and we relished cleaning and eating them as they were about as good as you can get around these parts.

The thing I like the best about crappie fishing this time of year is that you can catch crappie — and lots of them — on just the basic equipment. You can use a cane pole and cork, or a B-n-M crappie pole with minnows or jigs, or a jig and minnow on it and catch fish.

“If the water is low like it has been at Okatibbee, then find any brush or stumps in the shallow flats along the ditches and creek channels,” Murphy said.

“If the water comes up and gets in the grass beds, then move to the grass after the water settles. By the time late March and early April arrives, the crappie are ready to spawn and feed, so you just need to bring some crappie poles or ultralights and find out where they’re at. Keep that jig in the water, and when you find them, slow down and enjoy catching them.”

Now that the water has risen several feet, the crappie bite has been sporadic, but people are catching crappie. As the perch head for the grass to feed and spawn, the water starts receding, and it’s a daily hunt to find where they’re located. Usually they’ll back off to the edge of the visible grass and relate to submerged grass or ditches.

No matter how you like to fish, just remember to be open-minded and versatile, and don’t hesitate fishing a new area or new technique. You have to hunt until you find the crappie and then catch them when you find them.

If you want to experience some of the best fishing of the year, then you need to head to the water now, as the crappie spawn waits for no man. Carpe’ Diem.