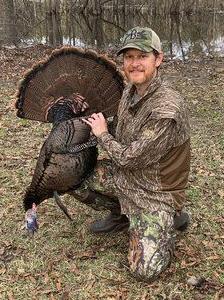 One of the adaptations that I have learned to make over the years of chasing turkeys is to always try to match my surroundings. Early spring often finds the turkey hunter trying to blend in with more browns and less greens. As you can see here, my upper half blends well with the tree trunks, and my lower half blends well with the ground. My lucky Red Sox hat, on the other hand, is just a personal risk that I am willing to take! 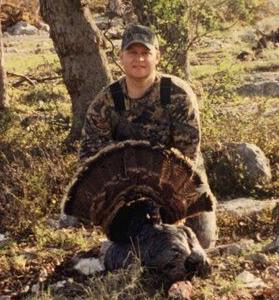 This Rio Grande gobbler was a hard-earned trophy from my first hunt in South Texas many years (and several pounds) ago. I was humbled and learned a lot about turkey hunting — and life — on that trip. Coping skills and problem-solving skills were both key components to my success in unfamiliar territory as I had to cope with several misses and problem solve to figure out how to ultimately be successful. 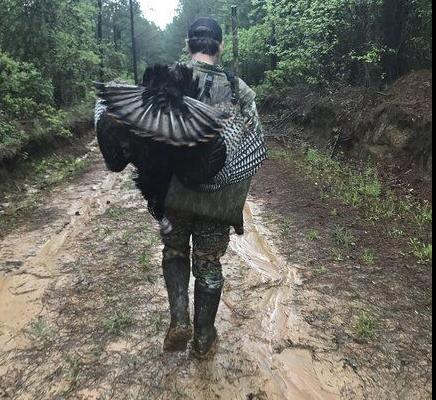 Persistence gets you out there morning after morning. However, as I mentioned, I believe that patience is what makes the difference between taking a “Walk of Fame” or walking out empty-handed at the end of a hunt.

Somewhere around the time I graduated high school, or shortly thereafter, I was given a copy of Robert Fulghum’s book “All I Really Need to Know I Learned in Kindergarten.”

In it, the writer and Unitarian Universalist minister discusses the importance of the life lessons that he learned as a child, the wisdom that came “not at the top of the graduate-school mountain, but there in the sandpile at Sunday School.”

Although the bestselling book has been criticized by some as simplistic and cliché, it resonated with me. I like simple. Furthermore, I think the world (myself included) could use a refresher on the Golden Rule principles espoused by Fulghum. “Share everything” immediately comes to mind in relation to my inner “only child” — I’m very particular about my things.

Along the same lines, I have often thought about the life lessons that I have learned in the outdoors, many of them while in pursuit of a wily old tom turkey, lessons that have served me well in both my personal and professional life. So, before I pen the novel “Everything I Need to Know About Life I Learned While Turkey Hunting,” I will provide you with a sneak peek of a few that top the list.

First, I would have to place the two “P’s” at the top of the list: persistence and patience. These are the first two qualities that I share with new turkey hunters that I am mentoring. I feel that both are prerequisites to successful turkey hunting.

Persistence gets you out there morning after morning. Looking back over my turkey hunting “career,” there were a lot of mornings that I came out of the woods without a turkey. In fact, I chased one gobbler that I ended up naming “Old Tomato Head,” due to his fiery red head, for four spring seasons on and off before I finally got him.

The ability to keep going, to keep coming back for more, has also served me well in my professional career as well as my personal life. In the words of Fred Astaire, the ability or willingness to “pick yourself up, dust yourself off, (and) start all over again” is, I believe, critical to success in life.

While persistence keeps you going, patience is, in my opinion, what makes the difference between hearing a turkey at sunrise and harvesting a turkey. I can’t remember a single hunt when I tried to rush things that ended with me walking out with a turkey over my shoulder. Too often, I think we try to force things to happen that go against normal turkey behavior because we are working on our schedule and not nature’s.

I’ve found that in life, just as in the turkey woods, patience truly is a virtue. It was also one of the hardest things for me to learn as I transitioned into adulthood. In a time of instant gratification, the ability to work, save and wait for something that you really want is difficult. However, much like waiting out an old gobbler, the reward at the end is worth the wait and is much sweeter when it is hard-earned.

After the two “P’s,” I believe two skill sets are critical to turkey hunting success: coping skills and problem-solving skills. How do you react when things don’t go as planned? Do you throw up your hands and walk away, grumbling as you go, or do you learn from the experience and, perhaps, from your mistakes and formulate another plan for success?

My first turkey hunting trip to South Texas comes to mind. Having previously only hunted in Mississippi and Alabama, I was unaccustomed to the sparse cover that the mesquite flats provided. As a result, my failure to blend in with my surroundings resulted in several missed turkeys. Finally, I made the necessary adjustments, clipping a hole in the limbs of a mesquite and using the clipped branches to create a blind. The next Rio Grande gobbler that came in never knew that I was in the world.

For me, coping and problem-solving skills equate to the ability to overcome any obstacle, which is what the United States Marines are taught in the concept of “Improvise, Adapt, Overcome.” It is, at its heart, the will to win and that, in both the turkey woods and in life, is a characteristic that I would value above almost any other.

This abbreviated list is far from all-inclusive. I’ve left off, among others, communication skills (not so much how to call but when and how often and the ability to adjust your style to your audience), dressing for success (matching your camouflage to your surroundings or your business attire to your marketplace) and work ethic (the ability to out hunt or outwork your competition).

Each of these traits and many more are key components of success in turkey hunting as well as in life; however, you will have to wait on the book for the rest. Until next time, much success, and I look forward to seeing you out there in our great outdoors.