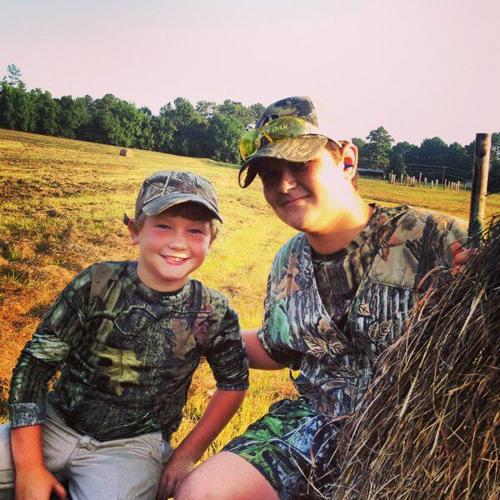 What we say and do in the field as hunters matters, especially when it comes to mentoring the next generation of hunters. Pictured here are a young Billy Van Veckhoven, left, and Dan Dye (nephew and son of Outdoors writer Brad Dye) enjoying their time afield during a 2013 dove hunt. 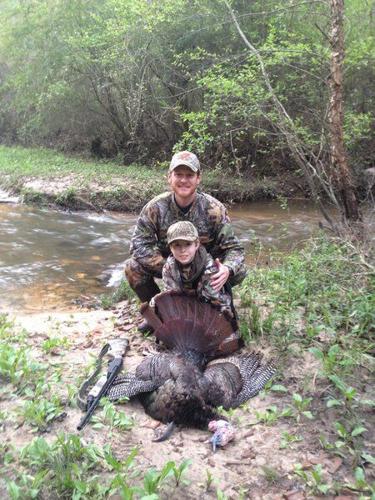 It was a memory that I will always treasure and one I hope Hays will never forget. As hunters, we are responsible for the future of our sport. What we say, what we do and what we write about and post on social media matters. We should treat the taking of any game animal with respect and make sure that those we mentor know to do the same. Pictured here are Outdoors writer Brad Dye and young turkey hunter Hays Monsour celebrating Hays' first turkey in April of 2014.

“Sometimes, all it takes is one kind word to nourish another person. Think of the ripple effect that can be created when we nourish someone.” -Fred Rogers

It was my birthday, and my daughter, Tate, and I had just sat down for a birthday lunch celebration at Jean’s when I heard a voice from the next table. “Are you the Outdoors writer?”

I smiled and said, “Yes ma’am,” not knowing exactly what to expect next. “I love your column,” she said with a smile, adding, “I don’t hunt or fish, but I love reading your articles.”

It made my day, and I told her just that. Tate and I enjoyed our lunch together, catching up on her work and mine, turkey hunting, the dogs, the farm and Dan’s pilgrimage across Spain, among other things. Our time together was the perfect birthday present, and we finished off the meal with a slice of “birthday” pecan pie, which was outstanding.

Driving home later that day, I thought about the woman’s kind words during lunch and realized I was smiling when I looked in the rearview mirror. “Mr. Roger’s Neighborhood” was one of my favorite shows as a child, and his words certainly ring true: Kind words are nourishing.

Her words also made me realize that I had accomplished, at least for one reader, what former Meridian Star editor Dave Bohrer had asked me to do a few years ago when he added me to the Outdoors page. Dave explained that he wanted the column to be about more than just hunting and fishing.

In my estimation, it was an easy ask, as my own personal outdoor interests aside from hunting and fishing ranged from trail running and mountain biking to hiking and backpacking. Moreover, it opened up a myriad of outdoors activities that could be written about through the experiences of others.

Talking to others about their adventures, be that turkey hunting in Kemper County or mountaineering in Patagonia, has been one of the things I have most enjoyed about writing my weekly column. It has also served as a beautiful reminder to me that each of us has a story, and how we share those stories matters, a reminder that what we say and how we say it can have lasting impact.

So, where am I going with this? Earlier this week, I received a copy of Charles Dodd White’s new book “A Year Without Months.” I highly recommend adding the book to your reading list as it is a treasure, and it contains an essay on hunting that, I believe, should be required reading for those of us who call ourselves hunters — especially those of us who write about it, utilize social media to promote it or participate in the mentoring of others into the sport.

I referenced White’s essay titled, “Why I Don’t Hunt Anymore,” in a prior column after I read it in its original magazine publication. Rereading it this week, I was reminded of something he said: “The crisis we face as people who care about the outdoors and hunting traditions is a crisis of messaging.”

I have been very vocal in my belief that as a hunter and fisherman, I owe it to the animal that I kill to treat it with respect. I also believe that respect should extend to the page or the screen if we choose to write about it or post it on social media.

Due to my extreme love of turkey hunting, many of the posts that come across my daily social media feed are about just that. Most of these are tastefully done, and for me, check the “respect” box. Those that do not have a short run on my feed. A recent post from the latter category featured a beautiful wild turkey that was referred to as a “pine pimp.”

In all fairness, I use nicknames for turkeys as well. I’ve used names like longbeards (mature gobblers), graybeards (wise, old gobblers) and even recently referred to the long-spurred Osceolas from Florida as “hookdaddys.” However, I think if I were taking a youngster turkey hunting for the first time, I could more easily (and unashamedly) explain the term “hookdaddy” versus that of “pine pimp.”

Our words and our actions as hunters matter, especially when it comes to influencing the younger generations that will be the future of hunting. In White’s words, “We have a problem, and it is up to the average, decent hunter to say something about it.” Hopefully, I can use this platform to do just that.

On that note, remember that, as Mr. Rogers pointed out, a kind word is nourishing. Make it a point to encourage someone this week, and until next time, I look forward to seeing you out there in our great outdoors.