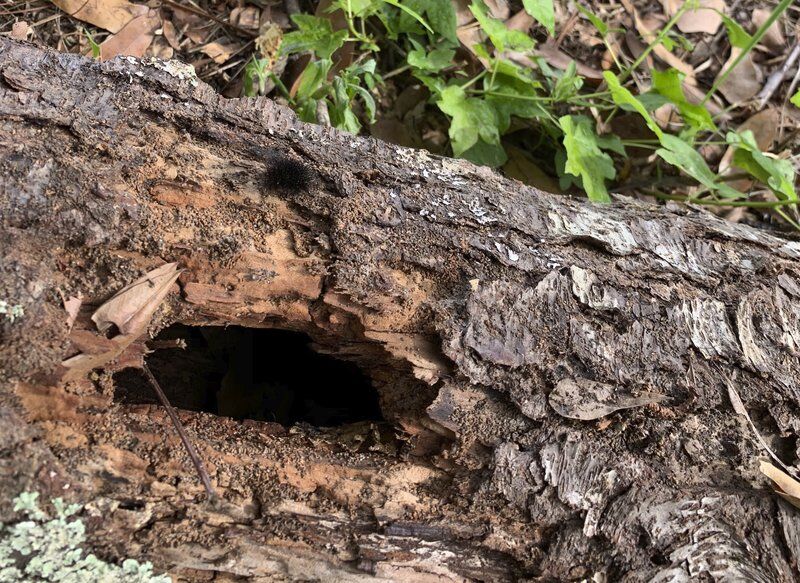 Since the woolly weatherman in my garage eluded my camera, I had to find a substitute. I’m no entomologist, but this little guy, upper left, sure looked like a juvenile version of the woolly bear caterpillar that was in my garage. If the folklore surrounding the woolly bear holds true, expect a cold winter here in East Mississippi! 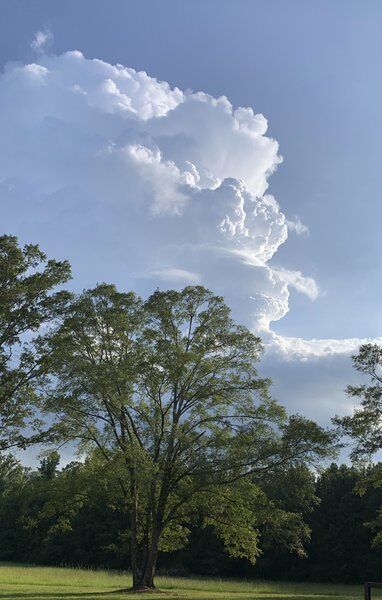 I didn’t point at it and I didn’t talk about it, but I did take a picture of the majestic cloud formation over the front lawn at the farm. It was magnificent! I found the Hopi Indian weather proverb after seeing the cloud and it certainly seemed fitting.

“Never point at or talk about a cloud. You’ll scare the rain away.” –Hopi Indian Weather Proverb

It’s time to start chopping and splitting firewood, readying the gas logs, and checking the furnace. Winter is coming and the signs tell me that it is going to be severe. I know, it’s hard to think about cold weather when the temperature is 95, but “feels like” 106, however, the science tells me to prep for the coming freeze.

So how did I come to this conclusion? I ran into a multi-legged meteorologist in my garage this week that convinced me! Every astute student of climate science knows that there exists only one infallible way to predict the severity of the coming winter – the woolly bear caterpillar.

I was loading a shop fan into my car for a small gathering I was helping host and when I moved the fan I saw him. I only say “he” because “he” clearly was a “he” based on “his” size. For the inquiring minds out there, the typical male woolly bear is around 2 inches in length while the female of the species comes in at around 3 inches.

It was not his size, however, that foretold of the Arctic freeze that is coming, it was his color. The woolly bear typically has black bands at each end with a brown or rust colored (see my beard) band in the center. The weather prognosticator that I met in my garage had the most minuscule rust brown band I have ever seen.

The bands on this multi-legged weatherman made it clear, it’s going to be a cold one folks! As any student of caterpillar meteorology knows, a wide band of rust means a mild winter is ahead, while more black foretells of a more severe winter. Based on the size of my friend’s rust band, I wouldn’t rule out glaciers as a possibility for East Mississippi this winter.

Before the letters to the editor start rolling in, yes, I am exaggerating. Was it Mark Twain that said, “Never let the truth get in the way of a good story”? I don’t have hard scientific data that backs up the claim that woolly bear caterpillars can predict the weather. It’s something that my father used to always point out to me when we would see one and while he had several other “old sayings” about weather, this was one of my favorites.

The ironic thing is, I had just read an article about the woolly bear several days before the rendezvous with my fuzzy friend in the garage last week. The article by Catherine Boeckmann entitled “Do Woolly Worms Really Predict Winter Weather?” was in my weekly newsletter from "The Old Farmer’s Almanac" (another scientific weather source that my dad was and is a big believer in).

According to Boeckmann, the legend goes as follows, “The woolly bear caterpillar has 13 distinct segments of either rusty brown or black. The wider the rusty brown sections (or the more brown segments there are), the milder the coming winter will be. The more black there is, the more severe the winter.” That’s the way my dad always told me as well, however, to quote a popular phrase, if we “follow the science,” what do the color bands actually tell us about the upcoming winter?

The Boeckmann article points to Dr. C.H. Curran, curator of insects at the American Museum of Natural History in New York City, and the studies he conducted with the caterpillar to determine the accuracy of the weather predictions.

Dr. Curran’s experiments began in the fall of 1948 and concluded in 1956. The data showed that “the average brown-segment counts ranged from 5.3 to 5.6 out of the 13-segment total, meaning that the brown band took up more than a good third of the woolly bear’s body.” The article goes on to say that “The corresponding winters were milder than average, and Dr. Curran concluded that the folklore has some merit and might be true.”

While this small sampling of data may not be exactly enough to declare the woolly bear the authority on winter weather trends, it clearly served as fodder for the caterpillar’s legend. The folklore and legend is still a source of inspiration. “For the past 10 years, Banner Elk, North Carolina, has held an annual ‘Woolly Worm Festival,’” according to the article, which celebrates the worm’s weather-predicting prowess and claims a success rate in the 80 to 85 percent range.

If that success rate is accurate, I think we all better start prepping for the winter! All sarcasm aside, I mentioned the Hopi Indian proverb to start the article because I am both fascinated with and awed by the connection Native Americans share with the land and environment around them.

Being “in tune” with our surroundings in the outdoors allows for greater enjoyment and appreciation of each outdoor experience. Moreover, it instills in us a desire to do our part to protect and enhance our outdoor spaces for the next generation to enjoy.

If you have a favorite weather proverb, let me hear about it and, until next time, I look forward to seeing you out there in our great outdoors!