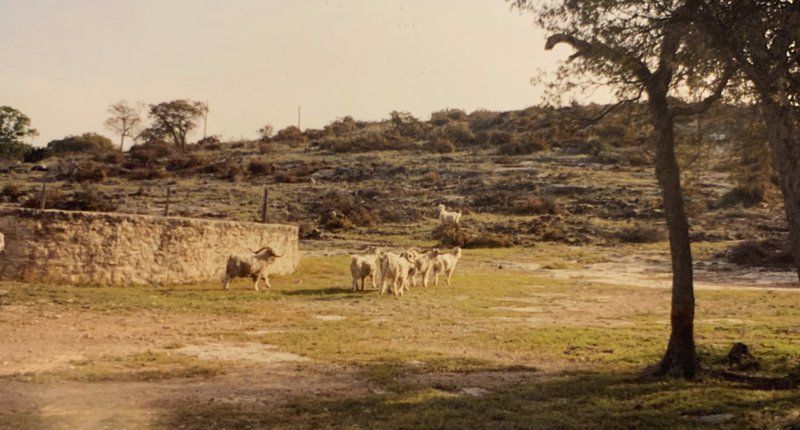 The ranch we were hunting in 2003 when I was “misplaced” by my guide was located between Sonora and Rocksprings, Texas. It was a working sheep and goat ranch and was my first hunting experience in the Lone Star State. These are just a few of the sheep I encountered during my long walk down the camino that my guide had told me was a “honey hole” for wild turkey. While I never saw a turkey during that afternoon hunt, the day ended with a view of the night sky that I will never forget and a ride home that I sometimes wish I could. 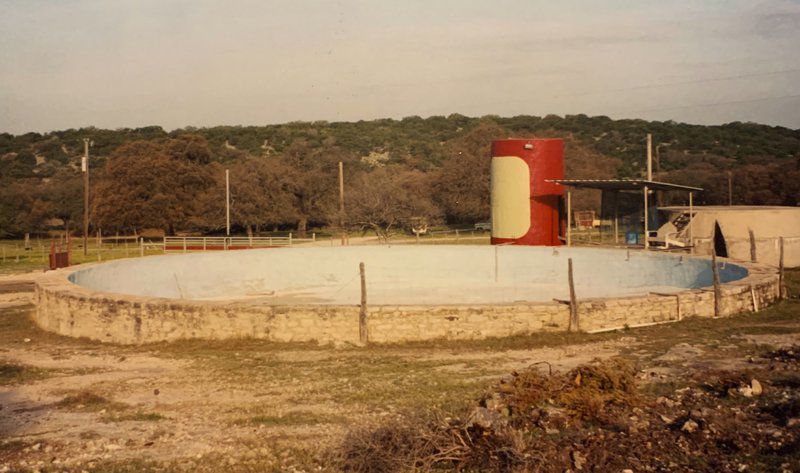 “Everything is Bigger in Texas!” That certainly applied to this water trough turned swimming pool just outside our lodge at the ranch. Those Mesquite-covered hills in the distance held more turkeys than this Mississippi boy had ever seen. 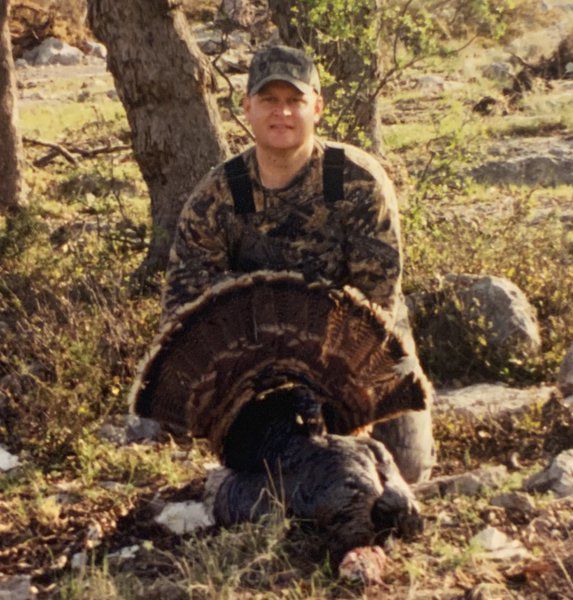 I ended up getting the biggest turkey of the hunt, however, it took several shots. I think I was overwhelmed by the sheer volume of turkeys on the ranch—I had never heard or seen so many birds! That excitement translated into several missed shots before I was finally able to get my first Rio Grande Wild Turkey on the second afternoon hunt of the trip. 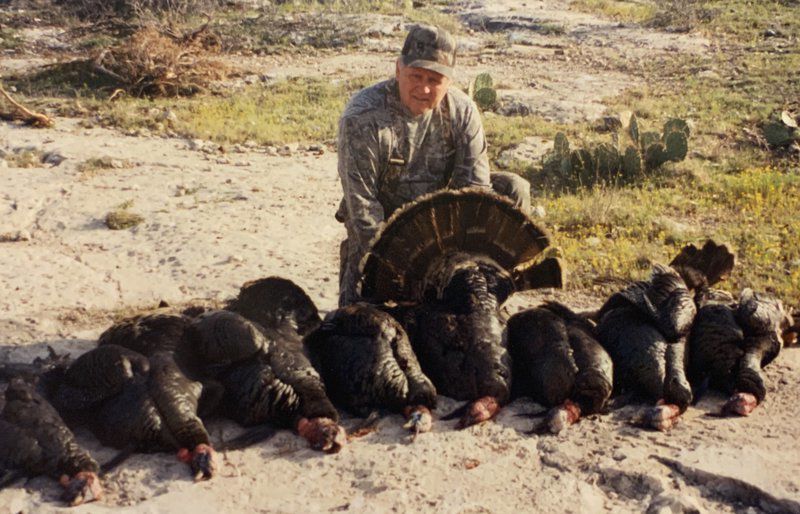 Our group harvested several trophy Rio Grande longbeards during that trip in 2003 to South Texas. Pictured here, my father-in-law, Billy Hull, poses with his bird and several of the others our group harvested.

Fortunately, I have never been lost in the outdoors while hunting or backpacking, although I have been accused of being lost on occasion. To be clear, I have, once or twice, gotten “turned around” while caught up in a hunting adventure, but never lost. One of the more memorable occasions when I was accused of being lost was during my first turkey hunt in Texas.

My friend and outfitter Steve Brown had been hunting the ranch we were to hunt for a couple of years and when he told me it was loaded with turkeys, I knew we had to go.

We drove through the day and into the night and, due to weather, traffic, and an unexpected delay in Abilene getting our hunting licenses, we arrived at the ranch just before sunrise with enough time to change into our hunting clothes and head out.

My father-in-law was able to get his first Rio Grande gobbler that morning using a box call his great-grandfather had made along with his grandfather’s shotgun. I, on the other hand, had my morning hunt ruined by two men on an ATV that accused me of trespassing.

Ownership of the land where my guide, and I use that term loosely, had dropped me off to hunt was apparently in question. My guide thought it was the ranch owner’s and the two men on the ATV thought it now belonged to the ranch owner’s ex-wife. After a heated discussion, cooler heads prevailed and the men left without incident, however, so did my chances of getting a turkey that morning.

That afternoon, my guide told me he would make up for my ruined morning by taking me to his “honey hole.” When we arrived, he told me that turkeys loved to travel the camino that lay in front of me. He explained that I could hunt the road until it ended at a barn where the ranch hands would be shearing sheep, wished me luck, and was on his way.

Since I planned to walk a lot, I lightened my load by removing a jacket and several other unneeded items from my turkey vest and placing them beside the gate where I had entered. I spent the afternoon hunting my way down the road and back to the gate and never heard or saw a single turkey.

Arriving back at the gate just before dark, I found my items as I had left them, placed them back in my turkey vest, and took a seat at the base of one of the many elevated shoot houses that lined the road to wait for my ride.

Soon it was dark and I lay on my back admiring the stars. With no homes or towns nearby, my view of the night sky was unimpeded. The panorama was breathtaking – never had I seen so many stars! As the wind began to pick up and the temperature began to drop, I wondered why my ride had not shown.

My thoughts shifted to “what ifs” such as what if someone in our party was injured or what if I have to spend the night out here? A quick inventory of my snacks and water supply told me I would be fine, however, with the temperature dropping and the wind picking up, I needed shelter.

I climbed the ladder on the shoot house and found the door was locked, but I ascertained that by removing four screws I would be able to open the door and have a nice shelter for the evening. Marking the time, I decided to wait another 30 minutes before disassembling the door.

Momentarily, I thought I could hear the squeaking of a truck suspension going over rough terrain in the distance. Eventually the noise got louder and finally I saw the headlights of a truck come up and over the hill following the fence line in my direction.

I was happy when I saw those headlights; unfortunately, that happiness was short-lived. As I climbed into the backseat of the guide’s truck I was hit with a barrage of questions from both the guide and my father-in-law. “How did you get to this gate?” “Brad, tell me how you got lost?”

Taking the high road, I bit my lip and said nothing. When we arrived back at camp, I poured a bourbon to calm my nerves and then explained to everyone that was heckling me just what had happened. Amazingly, I explained, the entire contents of my vest that I had left behind at the gate to start my hunt were still there at the “wrong gate” when I returned!

Stilled, I realized how thankful I was that nothing bad had happened and that I wasn’t spending a cold night under the Texas stars. I got my first Rio the next afternoon, after several misses that morning (that’s a story for another day) and all was right in the world, or at least in that part of Texas.

Until next time, I look forward to seeing you out there in our great outdoors!