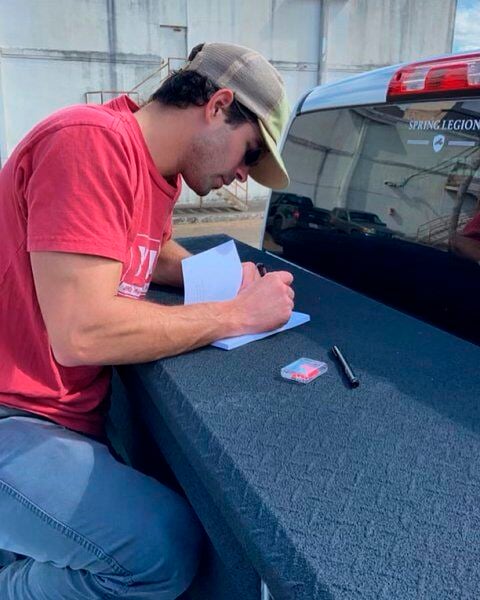 Author Hunter Farrior signs a copy of his new book “Ballad of a Turkey Hunter” in his mobile office. Farrior told me that the response to “Ballad” has been phenomenal. After reading it, I understand why. Farrior successfully brings the “old-school of thought” about turkey hunting to a new generation. 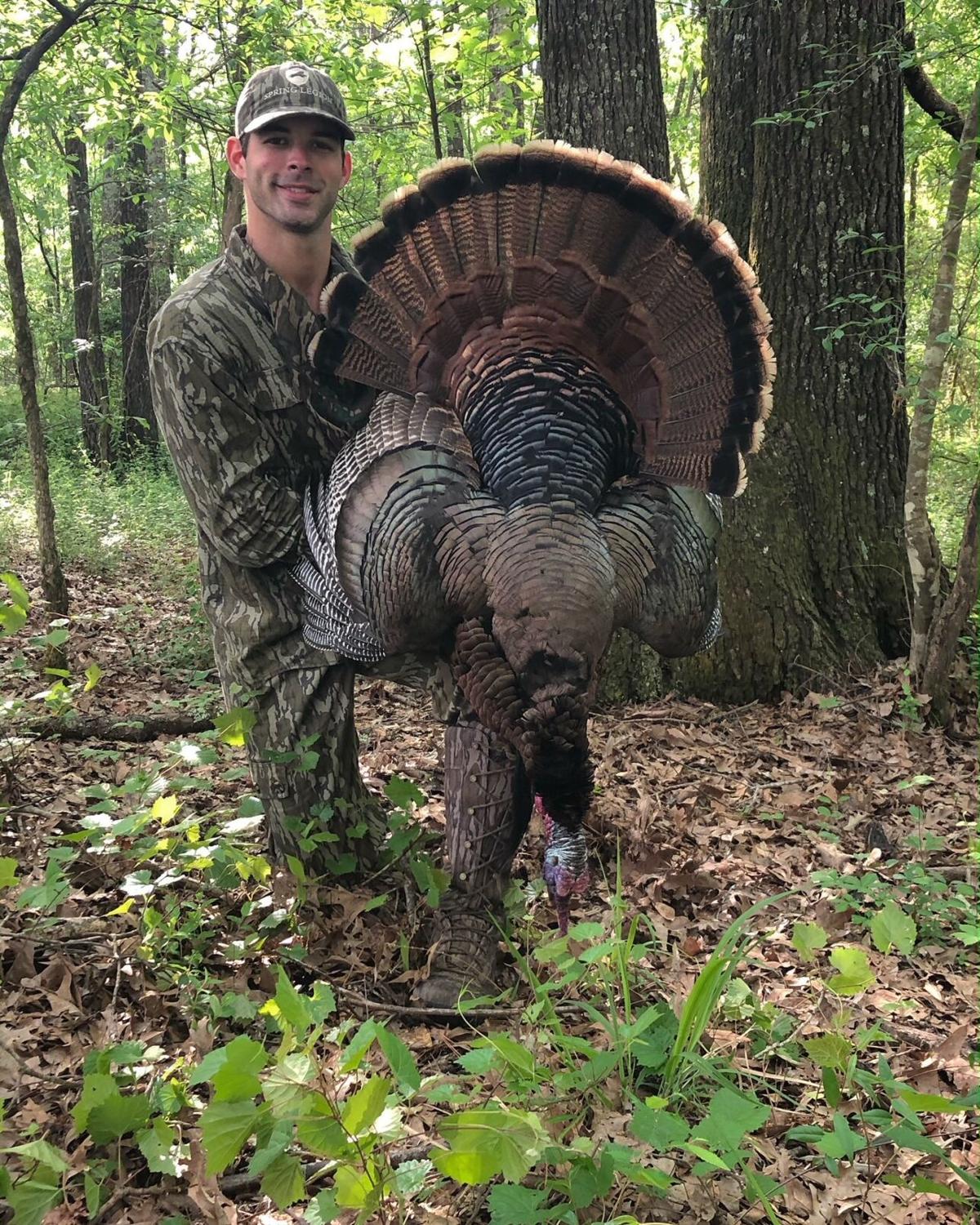 Author Hunter Farrior poses with a majestic eastern wild turkey that he harvested during a successful morning hunt at home here in the Magnolia State. 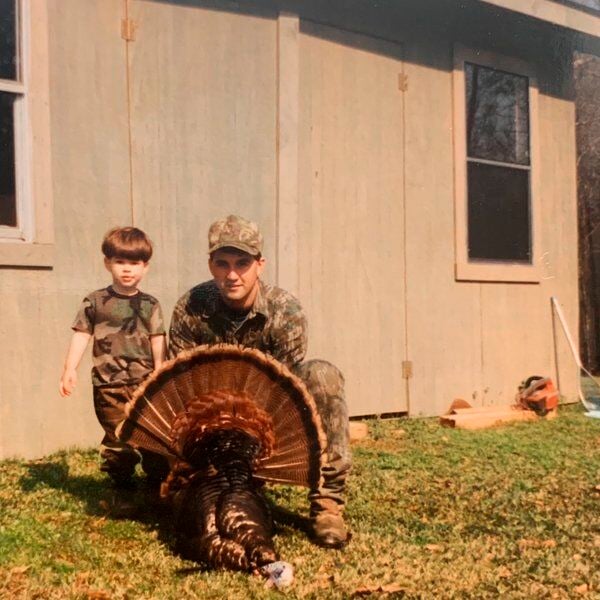 I firmly believe that mentors are the key to our future in the outdoors. Mississippi author Hunter Farrior holds to this belief as well and does a wonderful job of “paying it forward” to the next generation in his new book. Here, a young Farrior is pictured with his mentor and father, Bill Farrior Jr., after a successful morning in the spring woods. 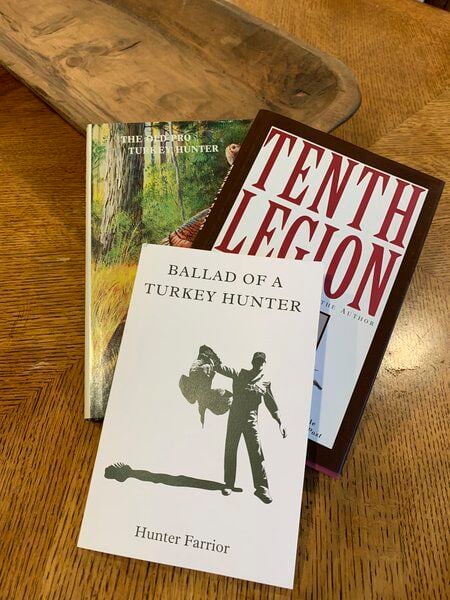 Each year prior to the season I like to reread the classics of literature — turkey hunting literature that is. This year, I added a new book into the mix. Along with Gene Nunnery’s “The Old Pro Turkey Hunter” and Colonel Tom Kelly’s “Tenth Legion,” I read Hunter Farrior’s “Ballad of a Turkey Hunter.” As I said, Farrior’s honest and approachable style makes the book multi-generational.

Turkey season in Mississippi is fast approaching, and I spent a good portion of this past weekend preparing. Prepping calls, checking the essentials in my turkey vest and assessing any needs for the upcoming season are things I thoroughly enjoy; things that have, after many years, become almost ritualistic.

One of these yearly rituals is the re-reading of the classics of literature — turkey hunting literature, that is. Each year I pull several books from our library shelves, and while the selections vary somewhat from year to year, two books are always included: Gene Nunnery’s “The Old Pro Turkey Hunter” and Colonel Tom Kelly’s “Tenth Legion.”

Every year, without fail, I find something that I have forgotten, something that will help me during the upcoming season in the sage words of Mr. Gene and Colonel Tom. Their words, along with the teachings of the “old pro” turkey hunting mentors that took me under their wings when I was a neophyte turkey hunter, serve as stalwart reminders of what turkey hunting is, what it should be and what it means to be a turkey hunter.

In the preface to his book, Mr. Gene states, “...this book is written as a message to the wild turkey hunters of America. We hope it will serve as a bond between the old pro turkey hunter of the past and the ‘now generation’ of turkey hunters.”

From these words, it seems in that 1980, when the book was originally published, Nunnery felt a need to bridge the gap between what turkey hunting should be and what he one day saw it becoming. That gap still exists today.

Fortunately, so does a legion of hunters that not only love and understand what it means to be a turkey hunter, but moreover have a strong desire to pass that knowledge along.

Last week, I spent time with a member of that legion, a turkey hunter that embodies the spirit of “the Old Pro.” During our time together, native Mississippian Hunter Farrior and I talked turkey and discussed his recently published book “Ballad of a Turkey Hunter.”

I discovered this impressive young turkey hunter and found out about his new book on his company’s Instagram site (@springlegion). His way of thinking is certainly “old school” as, when it comes to turkey hunting, he rightly places woodsmanship and the ability to interpret and learn from your surroundings much higher on the scale of importance than, say, turkey calling.

In Farrior’s words, “Woodsmanship, as a trait, characteristic, or whatever you would like to call it, is the single most important skill set when it comes to turkey hunting. Period. It is an art, a practice, and a process, all at the same time.” Couple this type of thinking with a love and respect for the wild turkey and its pursuit, mix in hours, days and years spent in that pursuit, and then utilize that experience to mentor new turkey hunters and, in my opinion, you have firmly ensconced yourself as an “Old Pro Turkey Hunter.”

With “Ballad of a Turkey Hunter,” Farrior has done just that. While reading it, I found myself impressed with his level of turkey hunting knowledge, as well as his turkey hunting maturity, a level of maturity that few turkey hunters possess at his age (or any age for that matter).

As is the case for many turkey hunters, myself included, he credits a mentor for his spring “obsession.”

In Farrior’s case, that mentor was his father, Bill Farrior Jr., and their hunts together have had lasting impact. In his words, “It amazes me how many times, years later, that I’ll be working a bird and think back to something my dad taught me before I was even big enough to carry my own shotgun.”

“Ballad of a Turkey Hunter” is written in an honest, straightforward way that I found  both enjoyable and approachable and, as such, I believe it should appeal to both young and old turkey hunters alike. It is, in this respect, multi-generational. Like Nunnery in his day, Farrior seeks to bridge the gap between old and new. As he told me during our interview, “I wanted to find a new-school way to bring the old-school theory of thought in turkey hunting to this generation.”

For me, “Ballad of a Turkey Hunter” also served as a reminder of the fact that while we may each have different ways and varying styles of hunting the wild turkey, we all need to carry out that pursuit with the respect that, in the words of the Old Pro, our “worthy opponent” deserves.

Whether you are an old pro or a newly addicted turkey hunter, make plans to read “Ballad of a Turkey Hunter” this spring. Signed copies are available at springlegion.com. Good luck in the turkey woods this spring, and until next time, I look forward to seeing you out there in our great outdoors.