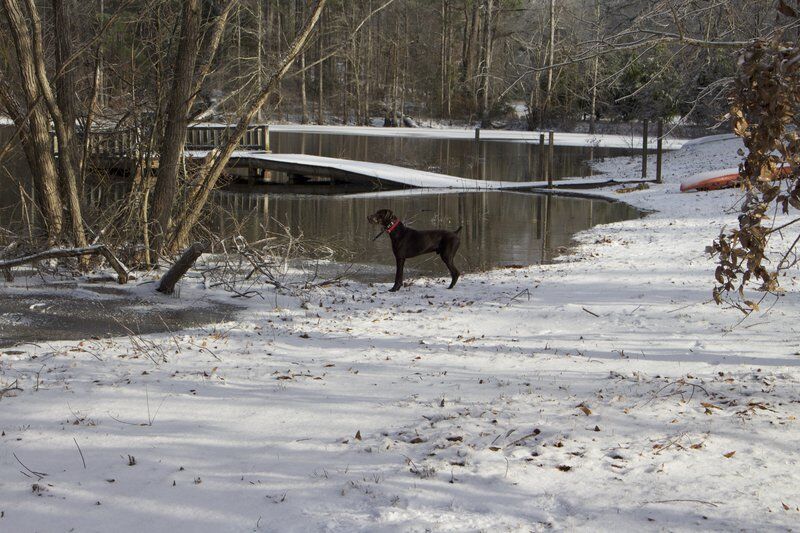 Moose was not as committed to the “refuge status” as the rest of us. He was in hunt mode as soon as he saw the ducks, and I don’t see that changing since he comes from a long line of hunters. Hunting is part of his DNA and what he lives for, and I love and respect that about him. Fortunately, all the ducks left “Gena’s Refuge” unharmed. 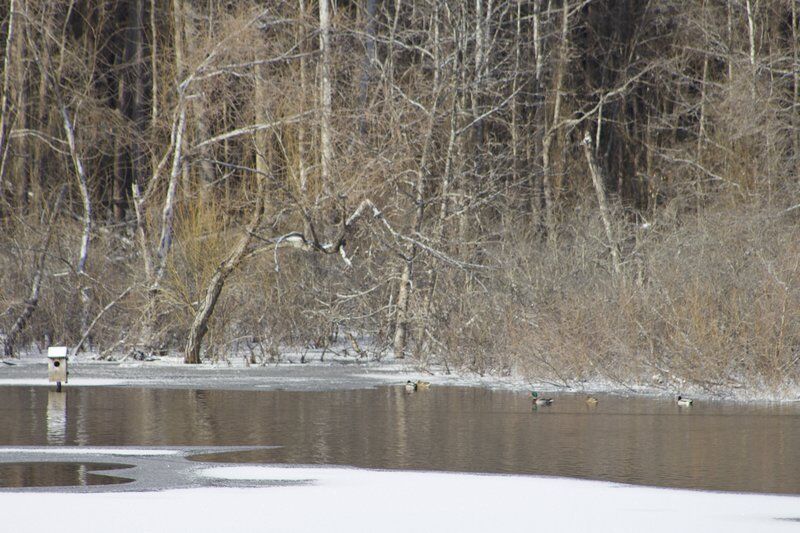 A group of mallards swim near one of the wood duck boxes that Pop and I put up at the lake. Each year, our resident wood ducks nest in those boxes, and hearing their squeals from the lake never fails to put a smile on my face and make me think about Pop. 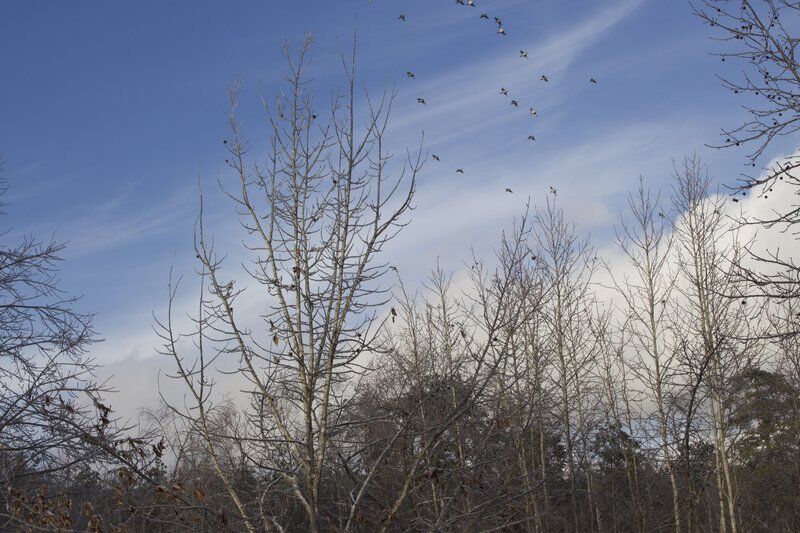 A group of mallards takes flight over the lake. I had a great time listening and calling to the ducks while they were enjoying the lake at our “wildlife refuge.” 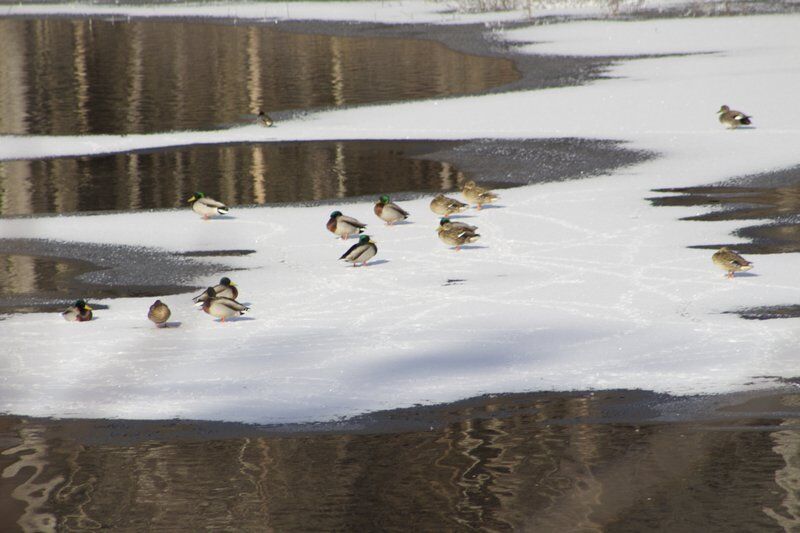 I captured this group of mallards and widgeon sunning on the frozen waters of the lake. Watching them and studying their behavior while they were here became one of my favorite activities each day and seeing them on the ice was a special treat. 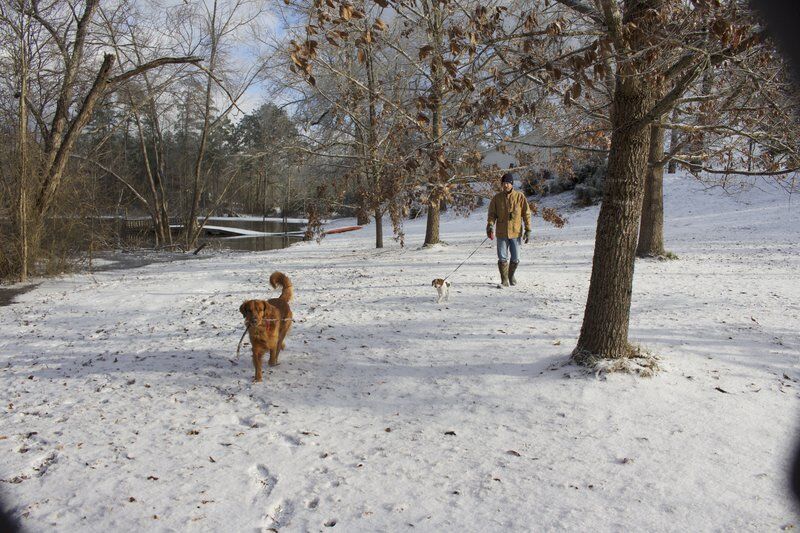 Our golden retriever, Murphy, and our beagle, Birdie, made regular trips with me to the lake during the winter storm to check on all the ducks.

“Through a series of developments that lead back to the original source, position, or situation — usually used in the phrase “come full circle.”

That’s how Merriam-Webster defines the phrase “full circle” and it perfectly describes our farm, the farm where my father-in-law, Billy "Pop" Hull, was born and raised and that, as of last year, became our home. That fits the “full circle” definition perfectly and, thanks to the squeal of wood ducks on the lake Saturday evening, I have thought a lot this week about our full circle journey.

I met my wife Gena while we were graduate students at Mississippi State. After grad school, we got married, moved to Meridian, started a family and raised two children. Through it all the farm remained intact and family owned, for the most part.

At some point during those years in Meridian, we decided to make the farm our hunting and fishing camp, and what we call the Little House became our camp house. Several years later, Pop had an opportunity to buy what we called the Brick House, which sits just up the hill from the Little House, and he did so with the agreement that Gena and I would eventually purchase it from him and make it our home.

Last year, that’s just what we did. Gena and I remodeled the Brick House, Nana remodeled the Little House, and we began the next chapter in each of our lives — the farm chapter and the country chapter. In doing so, the farm came full circle, and having grown up in the country, so did I.

I can honestly say that we’ve not had one moment of regret with our move. However, we all wish that Pop had been alive to see and enjoy it with us. In the transition, what had been a camp house became a farmhouse and, ultimately, a home. Furthermore, the land immediately surrounding the two houses and the lake, which had once been part of the hunting land, became by declaration of my wife a wildlife refuge.

For the most part I have adapted easily to this change. I moved the ladder stand behind the lake, once a bowhunting hot spot, to a new location down the road on the tree farm and it became a new hot spot. I actually took my second-best buck ever there this year.

The new "wildlife refuge" status has brought with it a bounty of wildlife that we have thoroughly enjoyed watching. On moonlit nights this past fall, we watched as deer feasted on the bountiful acorn crop in our front yard, and later in winter we watched as they crossed the yard both day and night to visit the feeder in the grove of sawtooth oaks by the lake.

Watching our resident wood ducks pitch in at last light each day and hearing their squeals from the lake as we sit on the screened porch or front porch has become one of our favorite afternoon pastimes. Follow that up with a show of stars unimpeded in the night sky by any city lights and, in my humble opinion, you have yourself the perfect evening.

Pop planted the sawtooth oaks by the lake, and the wood ducks are now residents because, around the same time, Pop and I put up the wood duck boxes in which they now nest yearly. That may not exactly be full circle, but it is certainly the circle of life.

During the recent arctic blast that hit our area, a large group of mallards, widgeon and hooded mergansers joined our resident wood ducks and Canadian geese. The quacking of the mallards and whistling of the widgeon blended with the squealing of the wood ducks and honking of the geese to make quite a lovely symphony.

When they left, I was glad to still have our woodies and our two cantankerous geese. The geese are especially intriguing to me. Perhaps they are young, but they act like an old married couple. Since Canadian geese mate for life, I often find myself envisioning the daily lives of these two octogenarians.

They usually leave each morning and fly back in just before the wood ducks each afternoon. In my mind, I see them sitting at the usual table at their favorite diner during lunch between medical appointments and, later, visiting friends before making their return flight to the lake. I love a good routine, so their daily punctuality is not wasted on me.

I must admit that I have enjoyed watching the abundant wildlife at Gena’s refuge. In light of that realization, I told her that I would only make an exception to the no-hunting rule if the “Hartford Buck" (i.e. a giant buck) walks across the yard or a long-bearded gobbler appears in full strut next to the mailbox — during the appropriate seasons of course.

If either of those happen, I may find myself living in our barn (although it hasn’t been built just yet), but I will be happy. Until next time, here’s to coming full circle, and I look forward to seeing you out there in our great outdoors.