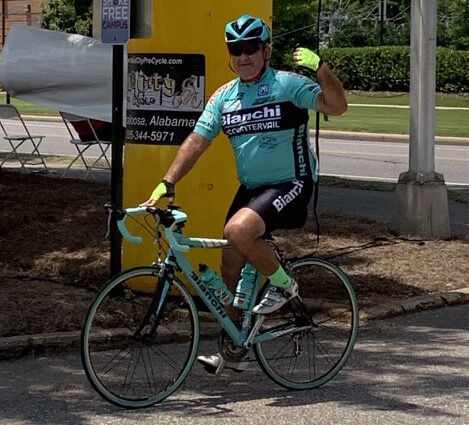 Meridian resident and West Lauderdale history teach Ed Abdella is training for the Natchez Trace 444, a 444-mile bike race that must be completed in 44 hours. 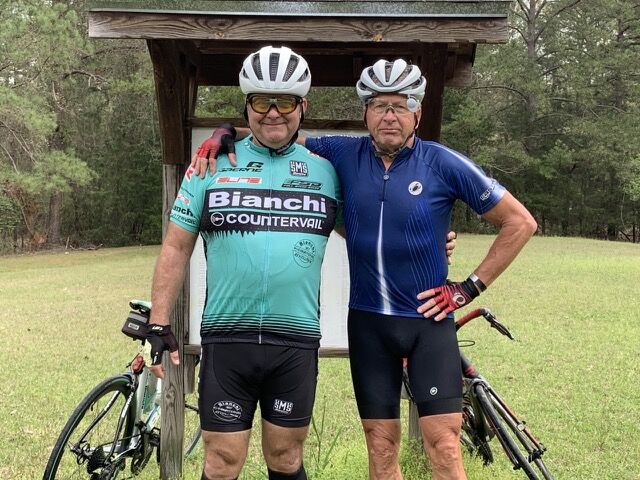 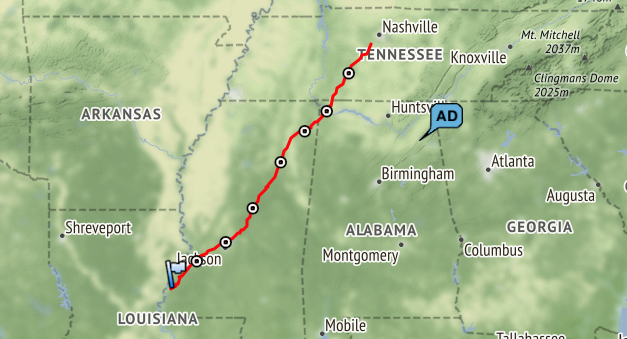 The route of the Natchez 444 runs from Brentwood, Tennessee to Natchez, Mississippi.

Ed Abdella is preparing for the bike ride of his life.

In less than 11 weeks, the 55-year-old Meridian resident will climb onto one of his Bianchi bicycles in Brentwood, Tennessee, and pedal more than 400 miles southwest to Natchez as part of an endurance race along a scenic road.

And he has less than two days to complete it.

Abdella is one of only 40 participants who will take part in the October event, a 444-mile trek through the Natchez Trace, a historic forest trail running three states, of which riders have just 44 hours to finish from beginning to end.

Training for the race has been filled with strategy, nutrition and motivation, but for a military veteran who could barely move due to an injury just three years ago, this ride means everything to Abdella.

Abdella began racing competitively when he was 14 years old and living in his home state of Connecticut. While he stopped riding briefly during the first part of his college days, he completely abandoned the sport while attending Clemson and once he joined the military. It was toward the end of his 26-year tenure in the armed forces that his back began acting up.

After returning from Iraq in 2005, he moved to Mississippi and became an instructor at Meridian Community College and West Lauderdale High School, the latter at which he currently teaches U.S. history and its AP course. While still active, running marathons for instance, he spent 30 years away from a bike, and said he regrettably thought the Magnolia State was limited on locations to ride.

The summer of 2018 is when Abdella’s back worsened, keeping him from running, golfing or even sitting in his favorite chair at home. He gained weight, and had to physically roll himself out of bed.

Surgery, a possible spinal fusion procedure, was out of the question, he said, and refusing to take opioids under fear of becoming addicted, he was stuck.

“I was in such excruciating pain,” he said. “I’ve never felt that kind of pain in my entire life, and I really didn’t know what to do about it.”

He eventually met with Azhar Pasha, a doctor at the Pain Management Center of Meridian, who was brought to tears by Abdella’s agony and informed him of alternatives to surgery and pills.  The interaction led to a visit at the clinic the next day, where Abdella was administered a steroid injection to his hip. Within 10 minutes, he could stand up straight again.

Concluding a regimen of three more steroid shots, he was pain free. And with encouragement from former MCC colleague and fellow biker Bob Sample, who pushed him to make a return, he soon decided to mount a bike and start distance-cycling for the first time in three decades. He lost 53 pounds in 60 days riding, and now, two years later, amasses 300-400 miles a week.

When Abdella plays a round of golf at Northwood Country Club, he packs his clubs in and travels from hole to hole in a cart that shows its 10-year-old age by squeaking, much to the confoundment of those with whom he plays, who at one time couldn’t fathom why their companion elected to spend $8,000 on a bike rather than fork over $2,000 for a new cart.

Now they want to join him on the road.

Sturdy equipment is just one of the components with which Abdella has equipped himself. In addition to two mechanics accompanying him on the Natchez Trace 444 who will be in charge of four bikes, he has a nurse who will also conduct massages, a driver/motivator who will operate one of two trucks tailing him during the race and Sample, who will serves as crew chief. Pasha, representing the Pain Management Center of Meridian which is Abdella’s sponsor, will also be present.

The role of his team is to keep him relaxed and to ensure he avoids any missteps on his trek, Abdella said, such as starting out too fast on a route that begins with 160 miles of hills and includes 8,000 total feet of incline.

“Everybody’s going to be excited the first day, but you’ve got to have a plan to more of a moderation rather than getting excited and going out too fast the first day, and then being tired the subsequent days,” said Emry Kennedy, one of Abdella’s training partners with 45 years of cycling experience. “We’ve been trying to give him that kind of advice and tell him to stick to a plan.”

Abdella, the only Mississippian participating in the event, said he’s been training for it during the past two years and heavily over the last year, collecting more than 11,000 miles from June 2019 to May 2020. While he has Kennedy and other training partners, a lot of his riding is done solo as he prepares for the physical toll the race will have, especially after the first 200-250 miles.

Abdella, with assistance from Sample, has his plan laid out: Every 100 miles completed, he will take a 45-minute to one-hour break that will consist of an ice bath, massage and food. After he finishes the first 244 miles, he will stop to sleep for four hours before waking up and continuing with his ride.

It’ll ultimately be up to Sample and the team, however, to decide what’s best for their man.

“You’re not going to spend 30 hours on a bike straight. You just don’t want to do that because that’ll get you in trouble because you get all delirious, and you don’t need to crash,” Sample said. “When he gets to the point where he starts getting exhausted, we have to become the voice of reason, and tell him, ‘Okay, we know what you’re thinking, and we’re not listening to you anymore. This is what you need to do.’”

With so much distance ahead of him come race day, Abdella said consuming the proper foods has become a major focus of his. At the rate he’ll be pedaling, he envisions burning 6,000-7,000 calorie every 100 miles. He’s thus relied on Sample, who in addition to his crew chief duties has become Abdella’s nutritionist, to provide the best options.

While training, Abdella has experimented with different foods. Recently, through a recipe from a company called Skratch Labs, Sample whipped together several types of rice cakes to be cut into squares and eaten in small amounts during a ride. He’s also concocted homemade electrolyte drinks.

“Every pain that you have is going to intensify, and I have to get ready for that,” Abdella said of the Natchez Trace 444. “What kinds of foods can I have while I’m riding that won’t upset my stomach or hurt me to where I’m off the bike?”

Sample added that comfort food is also crucial to a strong performance.

“At some point he’s going to be like, ‘What have I done? Why have I done this? I’m done. I quit,’ and we don’t want him to hit that wall and get off the bike,” he said. “So you throw him a little peanut butter and jelly rice cake or a little ham and cheese rice cake, something that makes him happy, and he keeps going.”

Earlier in Abdella’s training, he would receive phone calls around 9 p.m. from Sample, demanding he remove the Army Rangers patch from his old military uniform. Sample claimed Abdella didn’t have what it took to complete the Natchez Trace 444 and would embarrass the Rangers.

Not that Sample meant it, but it’s what he uses to motivate Abdella.

“He would do that all the time,” Abdella said. “He said, ‘Any time you start slowing down, I’m just going to start yelling and screaming profanities at you, and make you feel like a piece of garbage, because you’re going to make this ride.’”

That form of motivation is something most people don’t understand, said Sample, a former Marine. It’s part of the military mindset to which they both grew accustomed, and so much so that the similar mindset of bearing pain is what caused Abdella to delay in resolving his back pain. But often, that attitude is the biggest driving factor.

“With guys like us, sometimes the positive motivation — ‘You can do it. You’re going to be just fine and this is awesome. You’re doing great’ — that doesn’t work with us,” Sample said. “If I insult him, sometimes that works. It’s a very old school infantry thing to do.”

While he has 44 hours to complete the trek, Abdella said he wants to do it in 36. Sample, who like the other members of the team is taking part free of charge, said it’s astonishing what Abdella wants to accomplish in three months.

When he does cross the finish line, Abdella said it’ll be the culmination of what he’s spent all his time and focus on.

“I’ll be super stoked. To complete it in 44 hours, I’ll be happy,” he said. “It’s something that for the last two years since I’ve been training for it, it’s all I’ve been thinking about.”