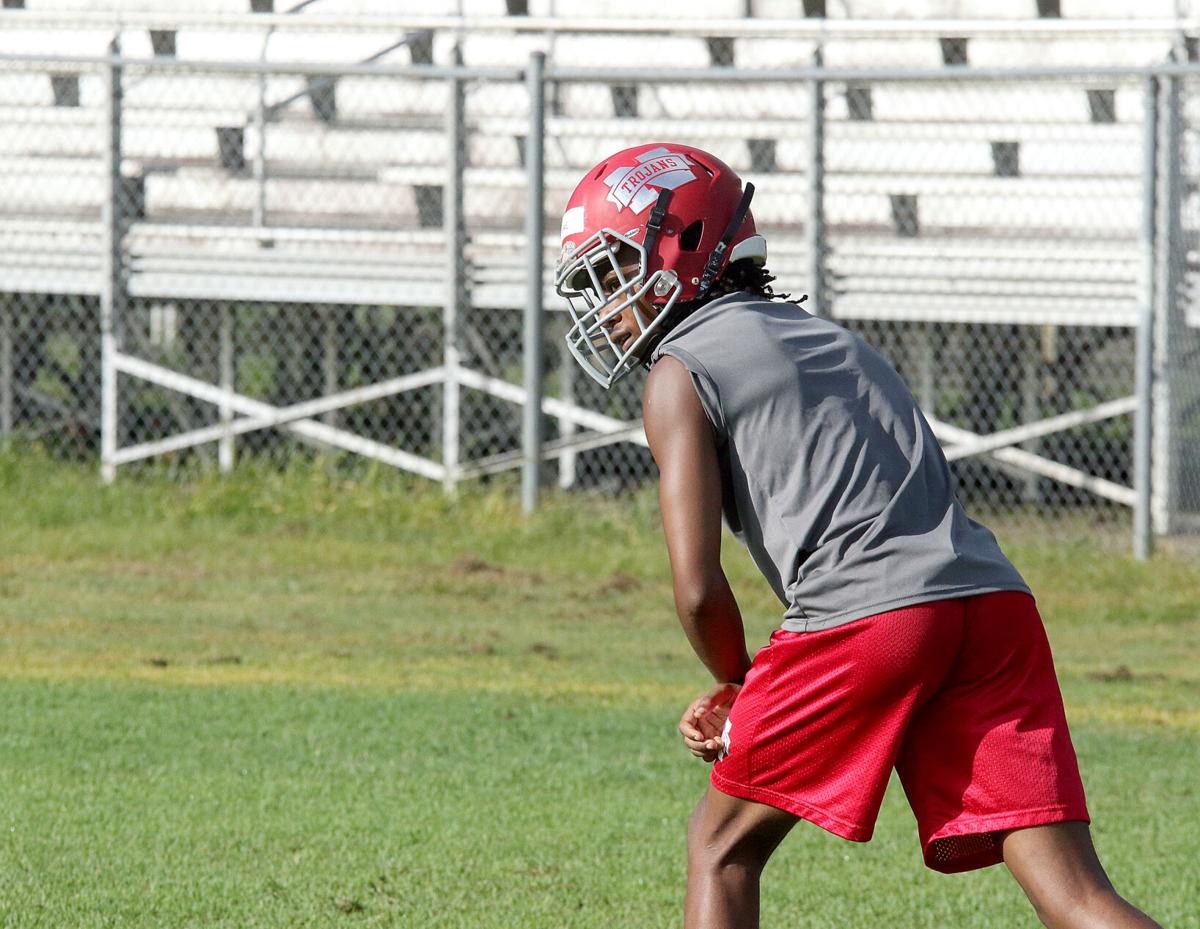 Northeast Lauderdale’s LaSanto Rowe lines up at receiver during practice Thursday morning at the high school. 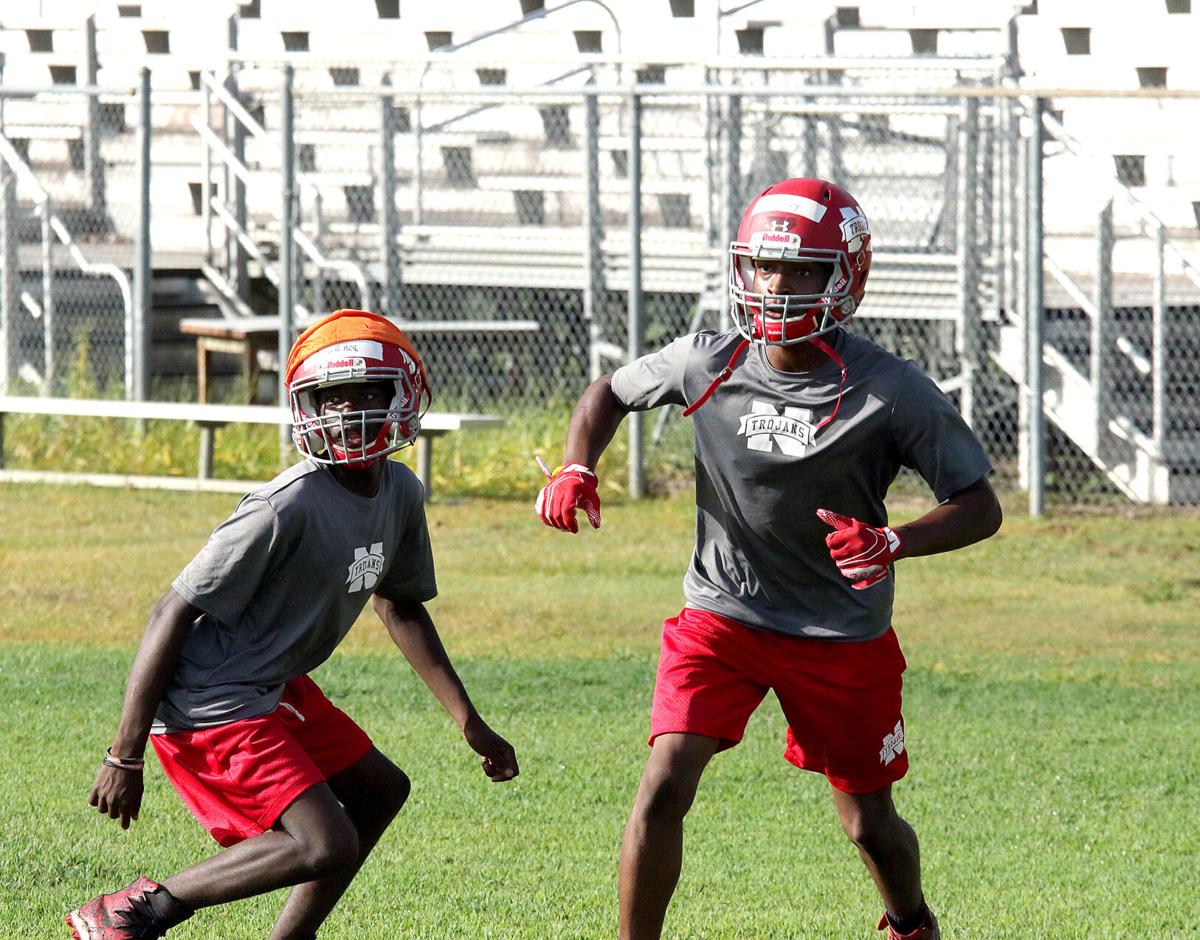 The Trojans’ D.J. McCory, right, cuts back on a route during practice as he anticipates the ball being thrown his way.

Northeast Lauderdale’s LaSanto Rowe lines up at receiver during practice Thursday morning at the high school.

The Trojans’ D.J. McCory, right, cuts back on a route during practice as he anticipates the ball being thrown his way.

LaSanto Rowe and D.J. McCory were members of the Northeast Lauderdale track and field team that won a state championship their sophomore year.

The team had a chance to repeat as champions this past spring, Rowe and McCory’s junior year, but the COVID-19 pandemic led to the cancelation of spring sports and robbed them and their teammates of winning two in a row.

Now, Rowe and McCory will try to bring some of that championship attitude to the Trojans football team this fall, and head coach Maurice Gowdy said he’s already seeing that attitude from them in the way they’ve been working since summer practices began. Both will line up at receiver and defensive back this fall, and Gowdy said he’s grateful not just for the skills they bring to those positions, but the dedication as well.

“I’ve seen commitment and growth,” Gowdy said. “I’ve seen them mature on and off the field. They’re picking up the systems on offense and defense, and we have a leadership academy with six different groups, and these two players have their own group. These guys have shown me that they can be trusted. They believe in what we’re doing — and they’re talented. I’ve been with some great programs, and these kids can play.”

That’s high praise, but Gowdy said the praise has been earned.

“They’re not doing a whole lot of talking,” Gowdy explained. “Neither one of them is a rah rah guy, but they lead by example and from what I’ve seen so far, their teammates are following them. These guys aren’t complaining, and it’s forcing their teammates to ask themselves, ‘If they won a championship (in track), what should we be doing?’”

McCory said the championship mindset in track and field is something he’s carried over to football.

“Work hard. Be the hardest worker on the field,” McCory explained. “Don’t feel sorry for yourself and try to push yourself further than before.”

Rowe said maintaining that commitment isn’t just for football this fall but for a return to track and field next spring.

“You have to keep grinding and working hard and wait for next season to come so we can try to win again,” Rowe said.

The two have known each other since they started playing football together in sixth grade. Rowe said McCory is just a few months older than him and jokingly referring to him as an elder sibling.

“We’ve been brothers ever since then,” Rowe said. “We go places together, and he’s like a big brother to me.”

Having been friends since middle school, McCory said that camaraderie is also useful in athletic competitions.

“There’s a connection between us,” McCory said. “We know each other so well that we know what each other is going to do before we do it. That’s what makes us a good combo in track and football.”

There’s also a friendly rivalry between the two as well. McCory won an individual state championship in the 400-meter dash his freshman year, and Rowe won the 400-meters their sophomore year when Northeast Lauderdale captured a team state title. They also go against each other in football practice sometimes, with one lining up at receiver and the other at defensive back.

“It’s 50-50 to be honest,” McCory said when asked who usually comes out on top when they face off. “Sometimes he’ll get it, and another time I will. All we’re doing is making each other better.”

Rowe chuckled when informed of that “50-50” statistic but didn’t deny it and said he hates losing to McCory in those situations.

Whether they’re pushing each other or trying to lead by example, Gowdy said he’s excited for the future of these two athletes, both on and off the football field.

“They can always say they were champions at the 400-meters, and that will spill over to how they live their lives — and that’s what we want to develop at Northeast High School,” Gowdy said.

For now, Rowe said he’s focused on being a champion in football.

“We only have nine games this year, so we should go 9-0 in the regular season,” Rowe said.