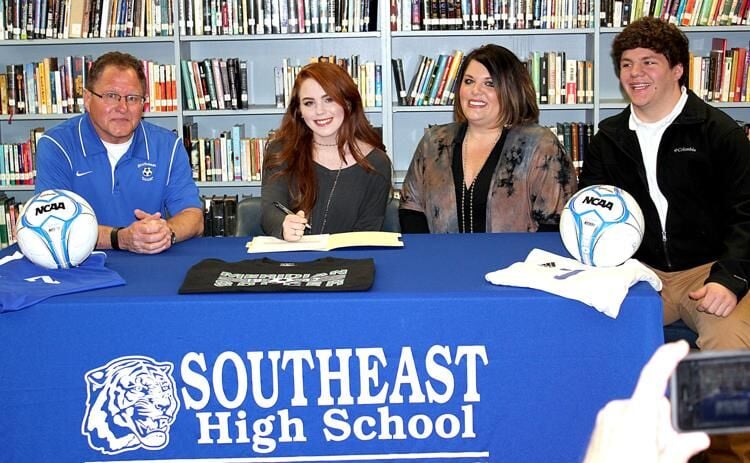 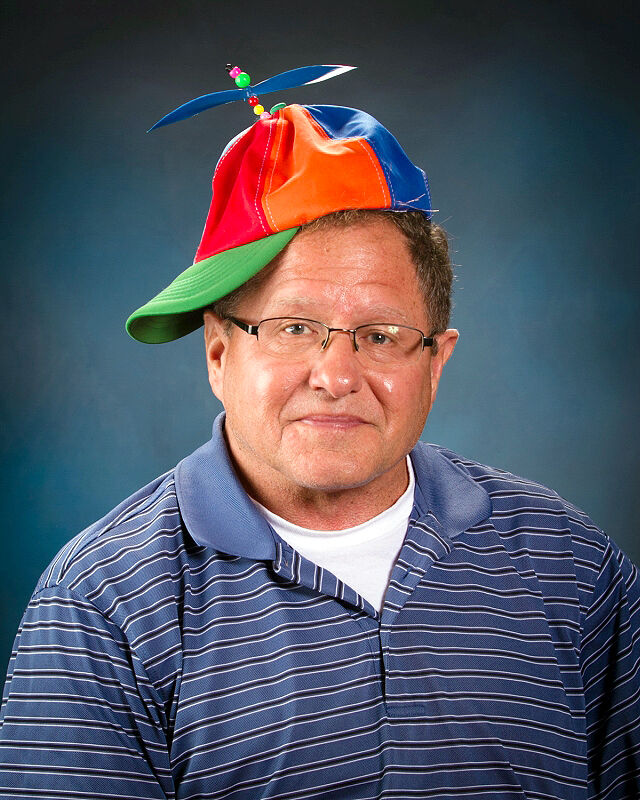 Mike Thomas wears a silly hat during a “funny pictures” photoshoot at Southeast Lauderdale several years ago. Thomas was known for his humor both as a teacher and soccer coach.

Southeast Lauderdale alumnus Andrew Bernard remembers a game during the 2014-15 soccer season where the Tigers trailed at the half.

The team was frustrated, Bernard recalled, and head coach Mike Thomas decided to use humor to lighten the mood.

Bernard couldn’t help but crack up at the remark, both then and now. Thomas’ ability to keep the players laid back was a big help during their run in 2015, when Southeast Lauderdale won the MHSAA Classes 1-3A state title in boys soccer. It was just one of countless happy memories Bernard has of his former coach, who retired from teaching and coaching at Southeast Lauderdale prior to the 2018-19 school year.

Thomas died Thursday, Aug. 6, after a battle with COVID-19. The news hit Bernard hard, as Thomas was someone who Bernard remembers fondly.

“I’m actually a nurse at (Druid City Hospital) in Tuscaloosa, and I work in the ICU,” Bernard said. “It’s terrible what it does to you. He was a great guy, a great coach and a great person. He meant a lot to everyone and with how he influenced people’s lives with soccer or whatever it was. He had a servant’s heart and glorified God in what he did. He was there for people and always encouraged them. It really is tough.”

“He’s the reason I got into soccer,” Johnson said. “He gave me a chance, and I wound up being pretty good at it. Soccer changed my life, and everything I do is with soccer — and it’s all because Coach Thomas gave me that chance to play.”

Andres Alonso, who was also a member of the 2015 state championship team, said Thomas didn’t just talk the talk when it came to coaching.

“I would say he was a true dad with the way he would always sacrifice whatever it is he had to,” Alonso said. “He understood what he was giving up, but he did it because he cared for you.”

Said Bernard, “He always took the time to drive the bus. I played from grades 7-12, and he was always out there late at practice. He really cared.”

If his teams needed a mental boost, Thomas could provide that as well with a speech.

“The year before we won state, we lost in the North State finals, and everyone was crying, even him,” Alonso recalled. “He was like, ‘We’ll get another chance, and next time we’ll do better.’ Then the following year, we won state, so that made it even better. It was like he told the future.”

Everything was positive with Thomas, Johnson said, which made the atmosphere of his teams laid-back.

“His coaching style was never really negative,” Johnson said. “It was just a good energy that he brought.”

Thomas was known for his one-liners, which he would use not only at practice but also in the classroom, where he taught several subjects at Southeast Lauderdale.

“Whenever someone would interrupt him, he would always say, ‘Come on man, you’re buffalo-ing me,’” Alonso recalled. “In essence, ‘You’re running over me.’ His one-liners were either filled with enthusiasm, or sometimes they would be so dry. It was always hilarious because you’d never expect him to say something like that. He always had one ready.”

Bernard said it didn’t matter the situation, Thomas could crack a joke at any minute.

“He had this whimsical smile and wrinkle in his eye when he approached you,” Bernard said. “You’d usually come away laughing, or he would make the situation lighthearted. He’d always make you feel better about yourself regardless of what was going on.”

Kim Davis, who teaches Spanish at Southeast Lauderdale, said he didn’t reserve his sense of humor just for his students but his co-workers as well.

“I’m in A hall, and he’s in C, so we were far apart, but I could always count on Coach Thomas for a witty comment, a rye, dry sense of humor,” Davis said. “He was so funny to me, and I always smiled when I saw him.”

In addition to the jokes, Johnson said Thomas would often give nuggets of wisdom, nuggets that have stuck with him despite maybe not being taken seriously at the time. Comments like “The most important gift is time — because you can never get it back,” or, “Make sure you do the little things right, and then the big things will fall into place,” are words Johnson remembers to this day.

“Oh goodness, I can’t even tell you how many life lessons I learned from that man,” Johnson said. “I had a bunch of history classes with him, and he’d say these one-liners that we kind of blew off at the time that didn’t make sense, but the older we got, they all hit home and all of a sudden made sense. Those life lessons he tried to instill in us, we never knew how big those words would be in the future.”

Tara Shelton, a 2019 graduate of Southeast Lauderdale who had Thomas as a teacher in her freshman advisory, physical education, Mississippi studies and world geography classes, said Thomas was the kind of teacher who left a lasting impression on his students.

“Coach Thomas was truly one of a kind,” Shelton said. “He was by far one of the most genuine, knowledgable people I’ve ever known. He always had something interesting or thought-provoking to say to us, whether it was just a quick joke or a true-to-life statement that would stick with us. He taught us all more than just our class material; he gave us lessons to use for the rest of our lives. I will forever cherish the many lessons he taught us.”

Alonso took several of Thomas’ classes in high school and grew to appreciate some of the little things he did, like when he would allow foreign exchange students to paint their home country’s flag on his classroom walls, as well as their names and what year they attended Southeast Lauderdale. He also appreciated how Thomas seemed to do extra research on his subjects.

“He’d always tell these stories… he seemed to know a lot about whatever it was,” Alonso said. “He knew the facts from the books but also did his own research and would try to find a way to incorporate a funny story or something that had to do with what we were learning.”

With all of the fond memories, Johnson said he’ll be forever grateful for having played for Thomas and for having taken classes taught by Thomas.

“It hurts,” Johnson said. “I can’t really explain it, it just hurts. My heart hurts for his family.”

“It was devastating for me,” Davis said. “I know his wife and children — I’ve taught two of the three — and it was just really hard. I’m still devastated by it.”