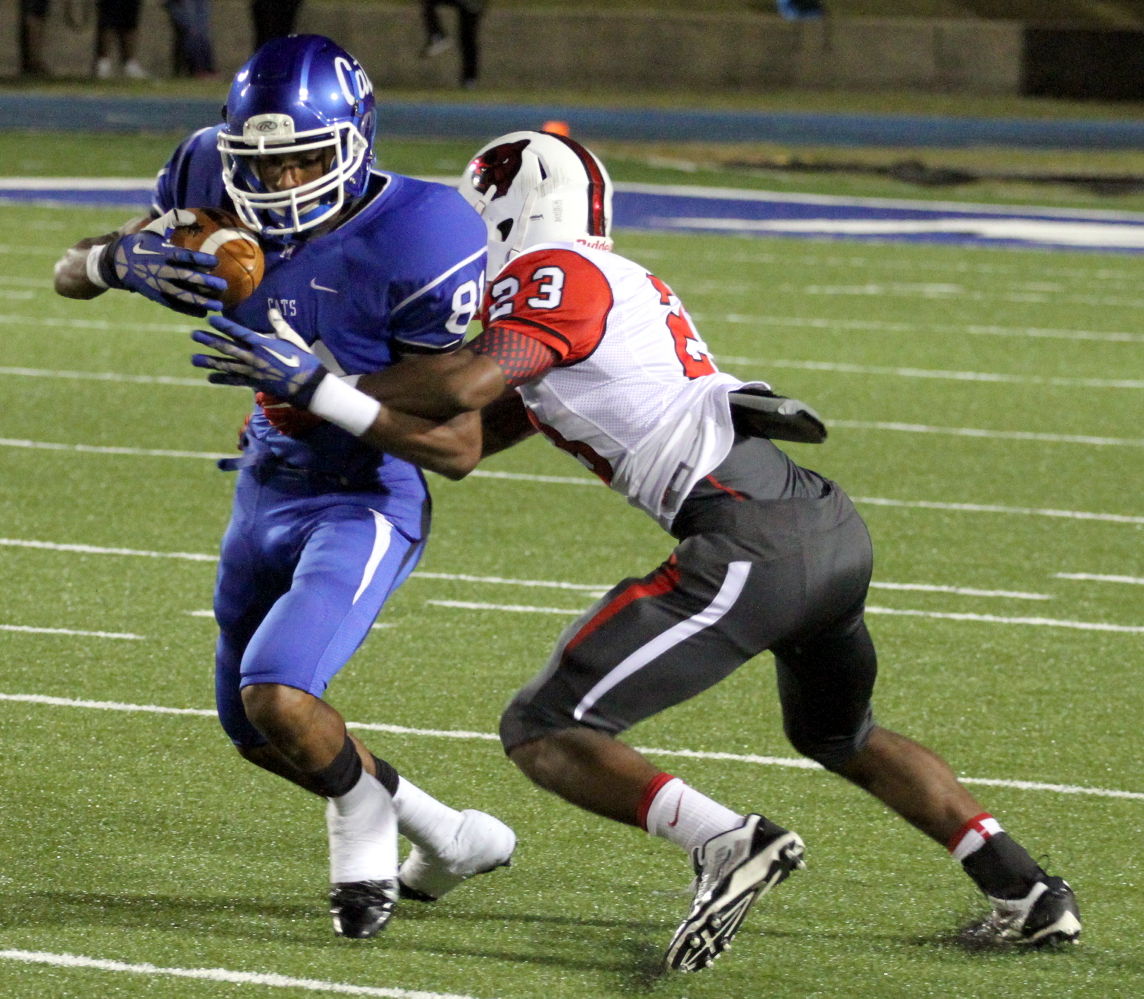 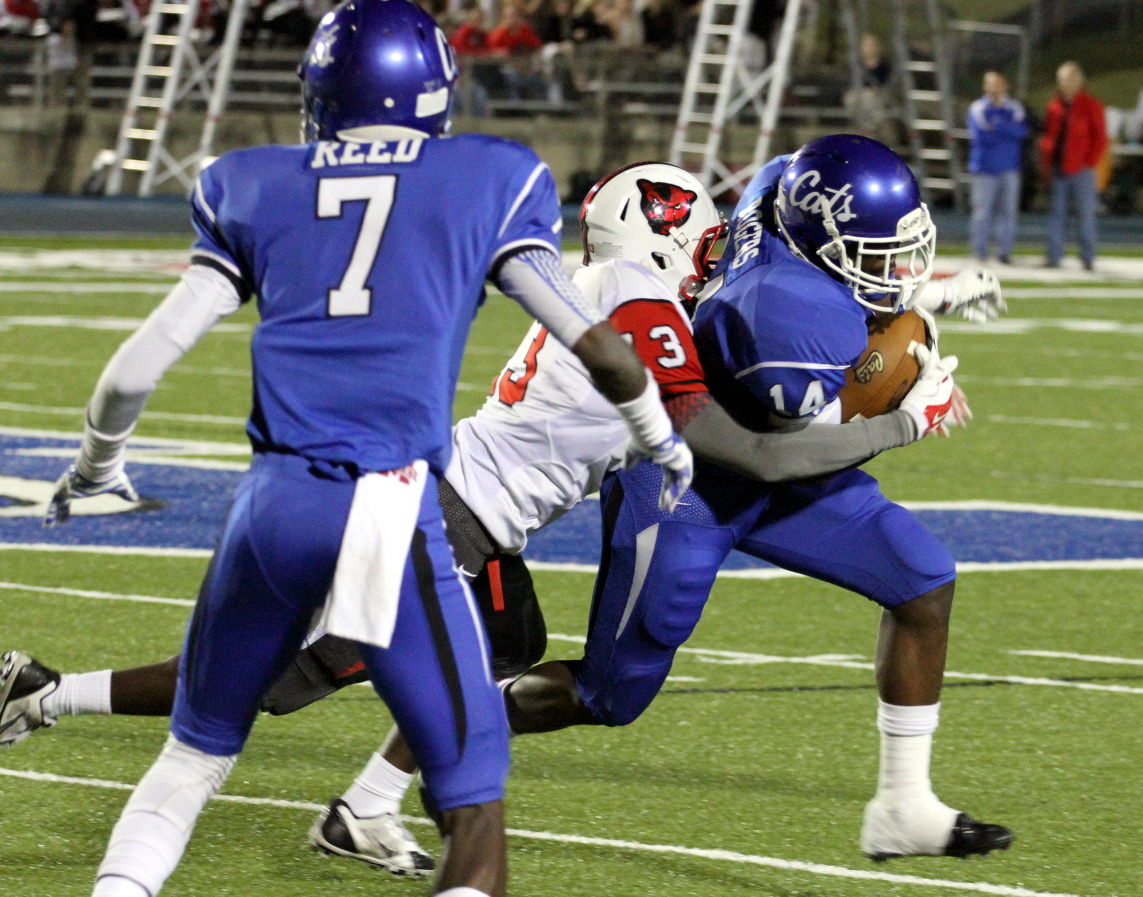 Meridian High School's Antjuan Rogers tries to get around the end as he gets caught by a Petal High School defender Friday night.

Meridian High School's Antjuan Rogers tries to get around the end as he gets caught by a Petal High School defender Friday night.

A 6-yard run by Petal High School cut Meridian High School's lead to 41-38 with less than four minutes remaining on the clock.

Tanner Estill's scoring play set up an onside kick for the Panthers, but Petal kicked the ball 15 yards and out of bounds, and an ensuing 15-yard penalty gave the Wildcats the ball on the Petal 46.

From there, Meridian (5-4, 3-2) was able to secure a few first downs and run out the clock, preserving its 41-38 victory and keeping its playoff hopes alive.

"It was better than the last two weeks," Meridian head coach Larry Weems said, referring to back-to-back losses to Oak Grove and Brandon high schools. "Anytime you can win, you'll take it. We have to do a lot of things a lot better, but tonight we did enough good things enough times to get a couple more points than they did, and we played awfully hard.

"I was glad to see our kids answer at the end with three minutes to go and a three-point lead and run the clock out."

Petal (5-4, 2-3) tallied 95 yards rushing and 124 yards passing. The Panthers were aided by a kickoff return for a touchdown on the opening play of the game, and two long returns aided set up two more touchdowns.

"I thought two good teams battled one another (Friday)," Petal head coach Marcus Boyles said. "There was great effort by both teams, and we just didn't make enough plays at the end of the night."

Tykwan Bridges got things started for Petal with a 77-yard touchdown return on the opening kickoff to give Petal an early 7-0 lead. Meridian struck back when quarterback J'Mar Smith hit Tray Warren for a 14-yard touchdown pass with 9:22 left in the first. The PAT failed for Meridian, however, making it 7-6 Petal.

The Wildcats gave up another long kickoff, which set up a 15-yard touchdown pass from Samuel Hopper to Nigel Wood on the very next play as Petal took a 14-6 lead.

Neither team scored again until the second quarter when Meridian cut it to 14-13 on a 12-yard touchdown catch by Travis Reed. Petal kicker Ruben Maldonado hit a 25-yard field goal with 6:19 remaining in the first half to give the Panthers a 17-13 advantage.

Meridian scored once more in the first half with Daniel Crowell caught a 55-yard pass from Smith to score. The Wildcats led 20-17 at intermission.

In the second half, Meridian's Antjuan Rogers hauled in a 14-yard touchdown reception to put Meridian up 27-17 with 8:18 left in the third quarter. But the Panthers again benefitted from a long kickoff return that set up a 27-yard run by Stephon Huderson, cutting Meridian's lead to 27-24 with 7:19 remaining in the third.

"We always feel really good about our special teams," Boyles said. "Coach (Ferrell) Trimm does a really good job with that, and our kids buy into that. We always feel like we have a chance in that phase of the game."

Weems said the kicking game left a lot to be desired when it came to kickoffs.

"I was about ready to eat arsenic," Weems joked. "It's hard enough to get people down on one side of the ball, on offense and defense, but you just can't donate them points like that in the kicking game."

Meridian was able to score enough points in the fourth quarter to keep Petal at bay. Corwell had his second touchdown reception of the night from 19 yards out with 9:39 left to play. Petal responded with a drive that ended in a 24-yard touchdown run by Huderson, making the score 34-31 with 6:56 remaining.

Meridian's game-winning touchdown came on a 54-yard scamper by Smith with 5:56 left to play. Petal's final touchdown was on Estill's 6-yard carry with 3:31 to go.

As far as playoff pictures go, both Weems and Boyles said their teams needed to win out. Meridian will play at Terry High School next week, while Petal will return home to face Forest Hill next Friday.

A Celebration of Life service will be held later for Patricia Ann Gaddis Warren, who died Friday, June 18, 2021, at home. Stephens Funeral Home is handling her arrangements. Please visit the online register at www.stephensfunerals.com.

Arrangements are currently incomplete at Berry and Gardner Funeral Home for Mrs. Johnnie P. Taylor, 86, of Meridian, who died Thursday, June 17, 2021, at her residence.