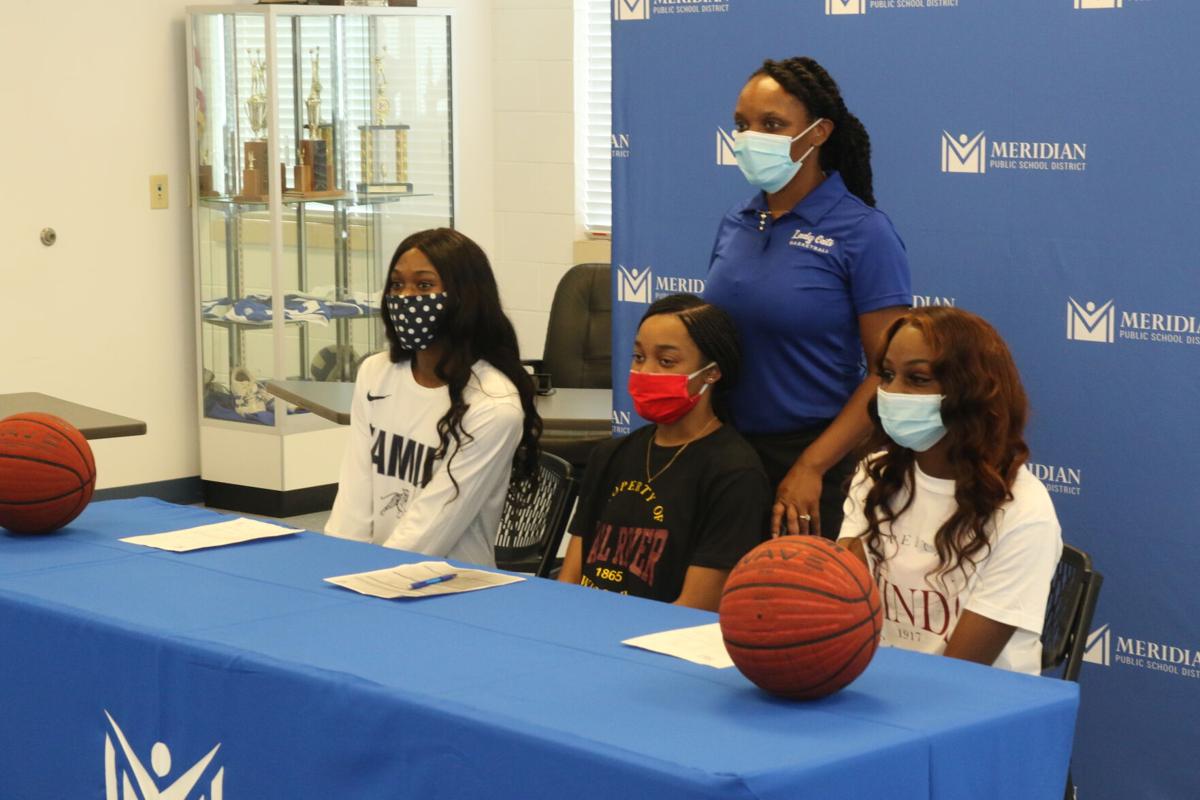 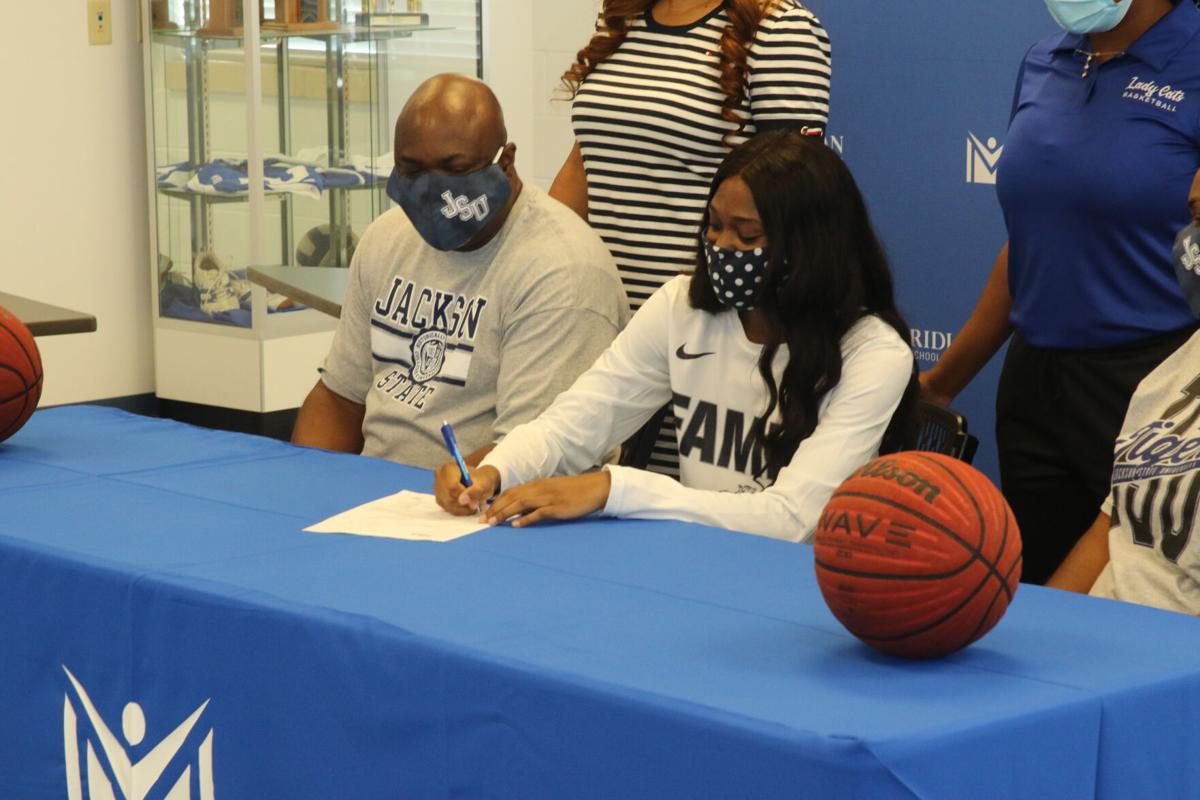 Meridian High School graduate Ti'Ian Boler signs her National Letter of Intent for Jackson State on Tuesday at the school. 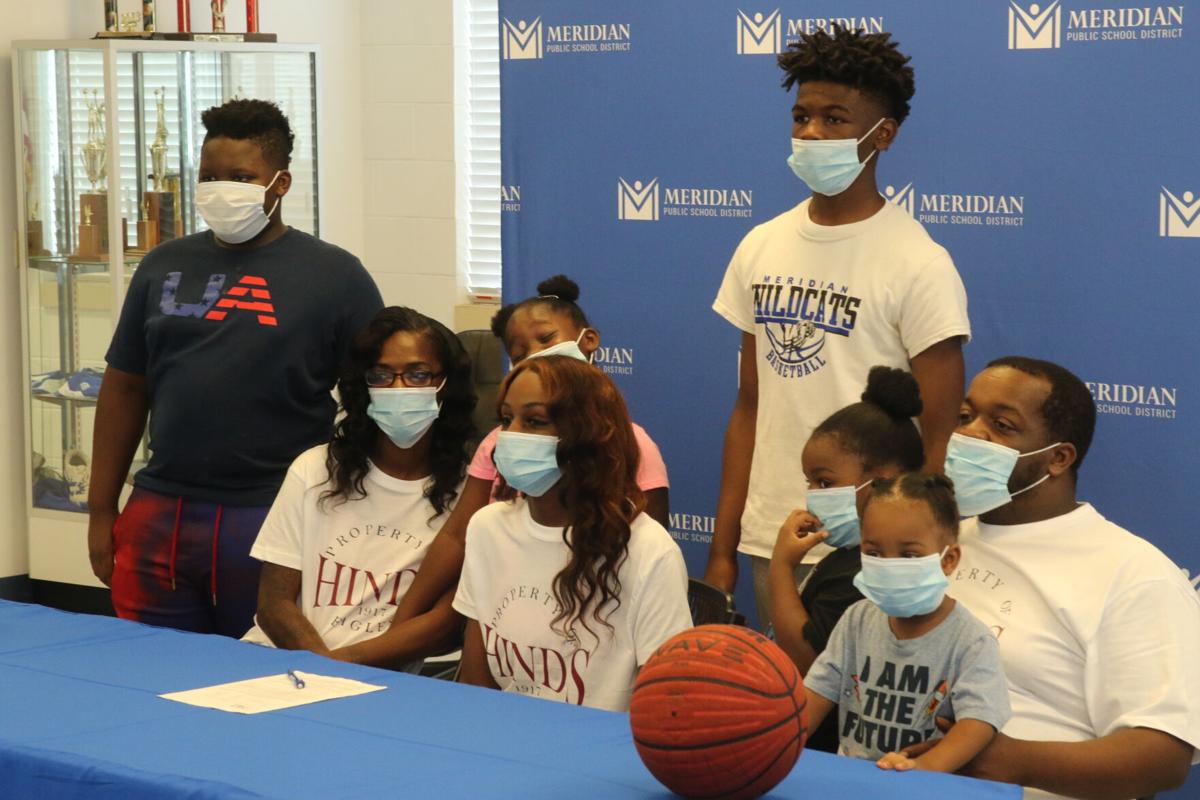 Meridian High School graduate Tyana Clark, center, is surrounded by her family before signing her National Letter of Intent for Hinds Community College on Tuesday at the school. 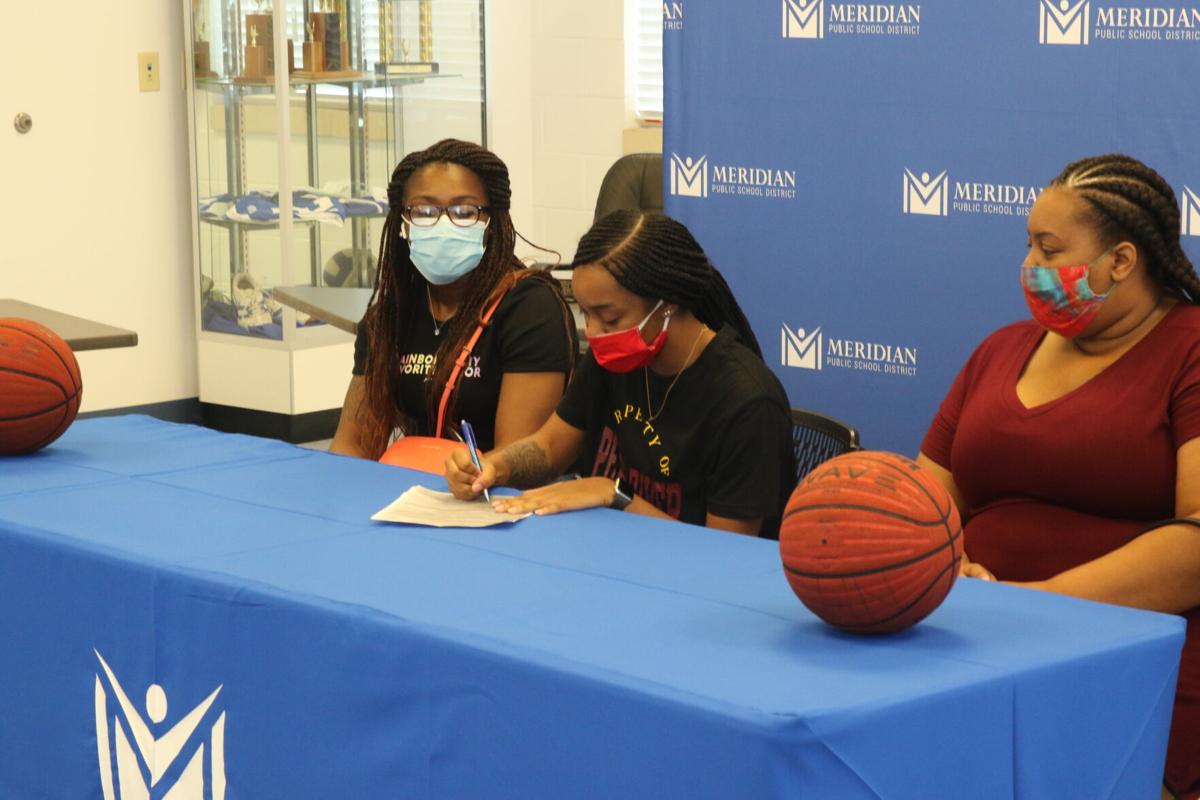 On Tuesday, the school hosted a signing ceremony for former Lady Wildcats basketball players Ti’Ian Boler, Tyana Clark and Tymesha Reed, all of whom made their commitments and signed their National Letters of Intents to continue their athletic careers in college months ago.

As members of this year’s squad who helped lead Meridian to a 29-2 record, including a 16-game winning streak and an MHSAA Class 6A semifinal appearance, head coach Deneshia Faulkner said the event was bittersweet.

“We made a lot of school history with these girls; I’m super proud of them. They did a lot for Meridian High School girls basketball, and we’re forever grateful for them,” she said. “We’re going to miss them, but we’re so happy to see them go on and excel, and show our younger kids there are things for them to look forward to.”

The trio also expressed their thoughts on their signings and how they landed on their chosen schools.

Boler committed to Division I Jackson State back in early December 2019 during the NCAA’s early signing period. She finished her senior year with the Lady Wildcats averaging 14 points, nine rebounds and four steals per game, earning her a spot in the Mississippi Association of Coaches Mississippi/Alabama All-Star Game and her third consecutive All-Region selection.

While her commitment was finalized some time ago, she said she’s still grateful to be a part of a ceremony at her now alma mater.

“I’m very thankful I still have the opportunity to sign. I started here and I’m leaving here,” she said. “My memories are here, but thankfully I’m moving on to the next level.”

She decided on the Jackson State women’s basketball program after attending one of their camps, she said, and discovering how the Lady Tigers’ fast-paced system mirrors the one she learned.

“I felt comfortable there. I felt just like I did at Meridian, running the floor,” she said. “My goal is to go in playing, not sitting down.”

Faulkner added she anticipates that Boler will find similar success in college that she did in high school.

“I think she’s actually going to go to Jackson State and do pretty much the same thing she did here,” she said. “She’s going to excel.”

While she didn’t begin playing basketball in seventh grade like many of her teammates, Clark got to work and eventually became one of the Lady Wildcats' rotating subs. Now she’ll be continuing her basketball career at Hinds Community College, which she said accomplishes a goal she’s had for several years.

“This is what I’ve been wanting to do my whole high school career,” she said. “I can’t explain the feeling, but it’s amazing to me the opportunity to play college ball.”

Hinds wasn’t originally on her radar, but after meeting with its women’s basketball coach and being introduced to the squad, she said it was where she wanted to go.

“It felt like I’d fit well with the team. There’s a lot of team chemistry that I’m familiar with from high school, so I knew I would like it.”

Faulkner said Clark was focused on improving herself during her tenure at Meridian and sees a possible opportunity for her to get on a Division I team.

“Once she did (start), she worked exceptionally hard,” she said. “She actually has a chance to go on and play beyond junior college basketball.”

Reed, a speedy point guard who would set up the Wildcat offense, averaged eight points, seven rebounds, seven steals and 10 assists per game in her final season, earning her MAC North/South All-Star and All-District honors, but missed a lot of time in her high school career due to an ACL injury. Now moving on to play at Pearl River Community College, she said a comeback is in order.

For Faulkner, Reed playing basketball in college was never in doubt.

“Her skill level is just off the charts, so there was no surprise that she was able to still sign her collegiate scholarship,” she said. “She’s been doing everything she needs to do in terms of her physical therapy and everything, so she’s going to come back strong.”