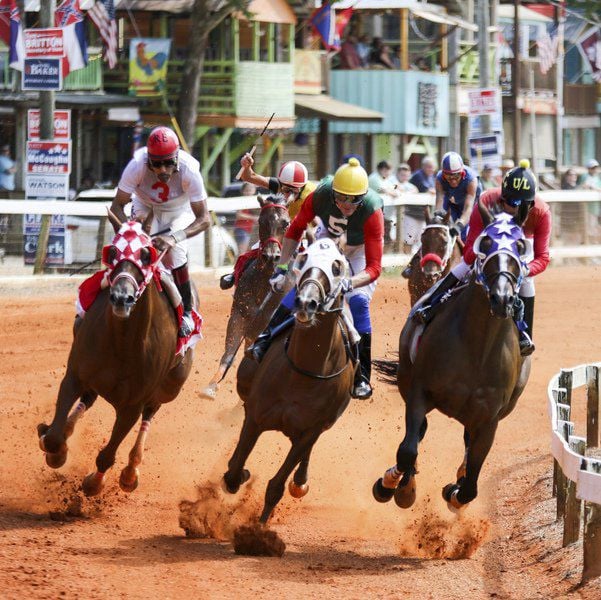 Horses race around a turn at the Neshoba County Fair racetrack under dry conditions. After a rainstorm and with sloppy conditions, jockey Joe Jernigan died as the result of injuries suffered when his mount slipped beneath him and threw him to the track on Aug. 2. 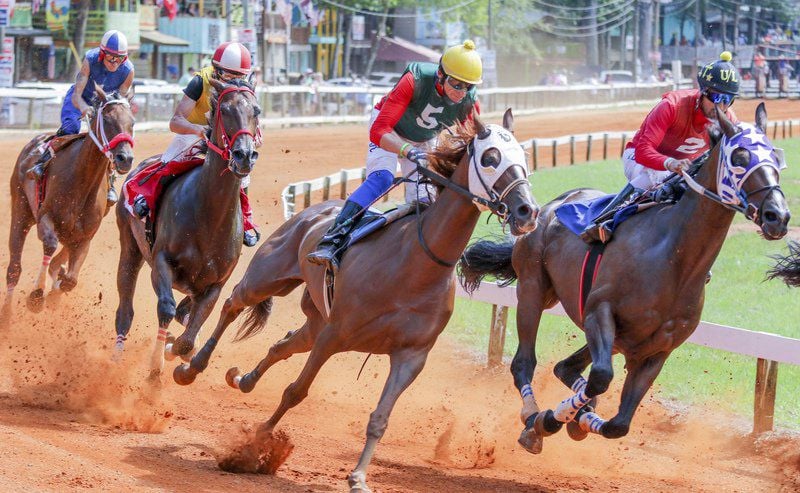 Horses race around a turn at the Neshoba County Fair racetrack under dry conditions. After a rainstorm and with sloppy conditions, jockey Joe Jernigan died as the result of injuries suffered when his mount slipped beneath him and threw him to the track on Aug. 2. Jernigan, wearing the red and white helmet, is on the third horse in this photo. 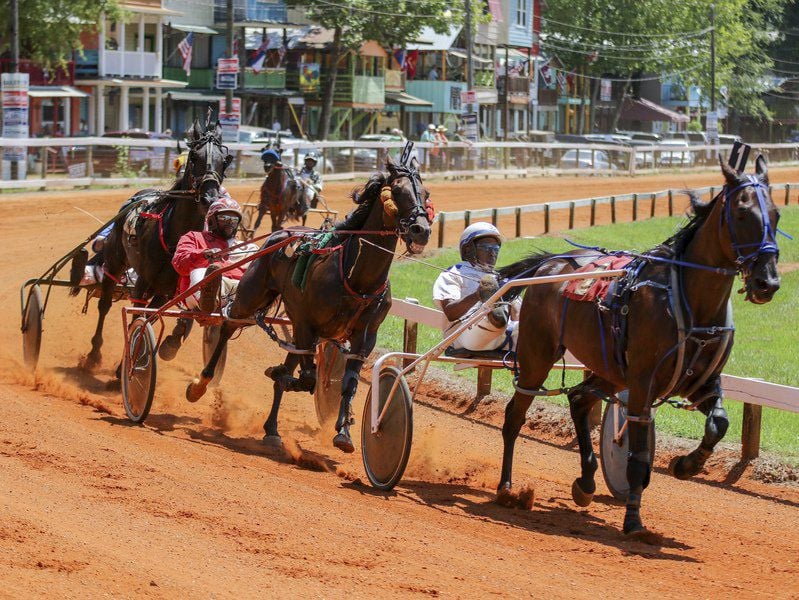 The Neshoba County Fair track caters to harness racing, which requires a smooth track for the buggy's wheels. 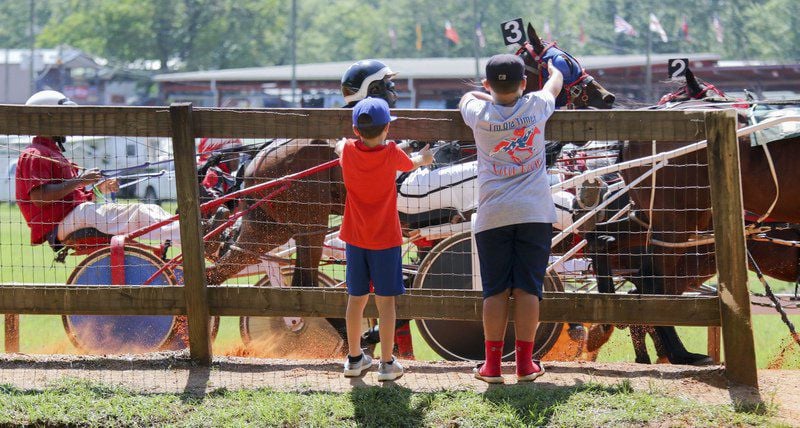 Young fans get an up close view of harness racing at the Neshoba County Fair racetrack.

Rain fell in a downpour on the Neshoba County Fair for 15 minutes late Friday afternoon of Aug. 2, interrupting the fair’s final day of horse racing.

When the rain let up, fair officials and a seasoned jockey walked the muddy track to determine if the surface was safe enough to continue the racing program, a popular attraction among fair goers.

The group included Speedy Barrett, who was scheduled to ride, and the co-chairs of the fair's horse racing event, Bud Dees and Chad Grantham. They noted the water on the surface draining off into the infield.

“We walked around it, talking, debating whether we were going to run because it’s the last day,” Barrett said. “I tell them, ‘As far as I’m concerned, I’ll ride.’ I’ve ridden in a lot worse, and I’ve ridden there longer than anybody.”

Barry Frank Spears was the lone jockey who elected not to ride. Barrett said he was fine with Spears’ choice, and stands by his own.

Kerry "Joe" Jernigan, a 56-year-old veteran of more than 2,000 quarter-horse and thoroughbred races, was among the four jockeys who saddled up.

The decision proved fatal. As he raced around the final turn, leading by a few lengths on the half-mile track, his horse lost its footing, throwing Jernigan to the track and tumbling over him.

Jernigan was rushed to Neshoba General Hospital with a broken arm, a broken collarbone, broken ribs and a lacerated lung, said his son, Cole Jernigan. That evening, the jockey was flown to the University of Mississippi Medical Center in Jackson, where he died six days later.

Poor track conditions contributed to the deadly accident, veteran horseman Terry Wayne Vance said. A video of the race shows the horse's legs slipping out from under him and hurling Jernigan onto the track.

Questions remain, however, whether Jernigan died as a result of a freak accident or factors such as track design, track composition and lack of a racing association to provide independent oversight presented a far-too dangerous competition.

“Safety always comes first, and I think it was overlooked, and it’s been overlooked in the past and they got away with it,” Vance said. This time, he added, “it jumped up and bit them.”

Jernigan was an experienced jockey, with more than 200 wins in more than 2,000 races. A native of Houston, Mississippi, he spent most of his career as an amateur, but raced briefly as a professional in the early 1990s in Louisiana. After retiring from the pro ranks, he became a perennial contender in quarter horse events at the annual Neshoba County Fair. He is remembered as a hard-working, good-natured jockey.

Like Speedy Barrett and the other jockeys that Friday afternoon, Jernigan wanted to ride in the fair’s last race.

“Everybody did the best they could do, and that was just a freak thing. It had nothing to do with the racetrack. I think it was the right decision to run the horses.”

Both Dees and Grantham, the co-chairs of the racing event, did not respond to numerous requests for comment.

The thoroughbred and quarter horse competitions are secondary to the harness races at the fair, said Brooks Vance, a local trainer who had a horse in an earlier race and Terry Wayne Vance's son.

The track is an officially recognized venue for harness races by the United States Trotting Association, or USTA. But no similar organization for thoroughbred and quarter horse races has sanctioned the Neshoba track for those breeds of horses.

The track’s surface is primarily meant for harness racing, which requires it to be smooth and hard to accommodate buggy wheels, Brooks Vance said.

“The fair board, they have to cater to the buggies,” he said. “They can’t put a whole lot of sand down. If they do, the buggies won’t be able to run.”

Because of its half-mile distance, the track requires quicker reaction time by jockeys than longer tracks.

Quarter horses, which Jernigan was riding, are smaller and faster than thoroughbred or harness horses. They are bred to sprint short distances, reaching speeds of more than 50 miles per hour. Thoroughbreds are bigger animals and often bred to run in races a mile or longer, such as the Kentucky Derby.

“If it was a mile racetrack, or a five-eights mile racetrack, it gives you more time to slow down, but everything happens so fast and it’s not very wide,” Barrett said. “They can’t make it wider because you’ve got cabins everywhere. You could probably cut the corners a little bit in the turns, but they’re not going to go spend that money.”

Barrett said the county fair association won’t make track modifications because the track is geared toward the harness horses, despite the popularity of thoroughbred and quarter horse races with fair fans.

“If they had made the right decision and called the race off, everybody would’ve been mad. But Joe would still be alive.”

Terry Wayne Vance said fair-goers would have been upset if the final race of this summer’s fair was canceled.

“If they had made the right decision and called the race off, everybody would’ve been mad,” he said. “But Joe would still be alive.”

No governing body in Mississippi

With the exception of the USTA and harness racing, the Neshoba County Fair racetrack has no oversight from a national or state horse racing agency for thoroughbred and quarter horse races. The county fair association is the sole overseer.

In Lousiana, Vance said, the state racing commission steps in “if we get a lot of rain, or there’s thunder and lightning, if the conditions aren’t safe, then management has people that make that call. Whether or not we like it, we have to abide by it.”

Larry Munster, assistant executive director of the Louisiana State Racing Commission, said match tracks (one horse against another) and fairground tracks in that state also operate on their own, and are not subject to the commission’s regulatory supervision.

He added that the sanctioned tracks are groomed and looked after on a daily basis. If there’s a problem, it is reported to the commission and it intervenes.

Munster said tracks such as the Neshoba County Fair are known as bush tracks, and are very unsafe.

At the Neshoba County Fair in 2012, jockey Blaine Little died when he lost control of his horse after his foot slipped from the saddle’s stirrup at the start of the race, causing him to crash into a fence.

“You ride at a fair, or you ride at a non-sanctioned race track, it’s a very dangerous thing.”

“You ride at a fair, or you ride at a non-sanctioned race track, it’s a very dangerous thing,” Munster said. “There’s nobody that I know of (that) controls that.”

Barrett said being a jockey is a dangerous occupation; that accidents can happen every time one climbs on a horse.

“You have a car wreck, do you quit driving a car,” Barrett asked? “This isn’t different.”

Vance said people make bad judgments all the time, but the decision to race on that Friday at the rain-soaked Neshoba County Fair track was the ultimate bad call, because it cost Jernigan his life.