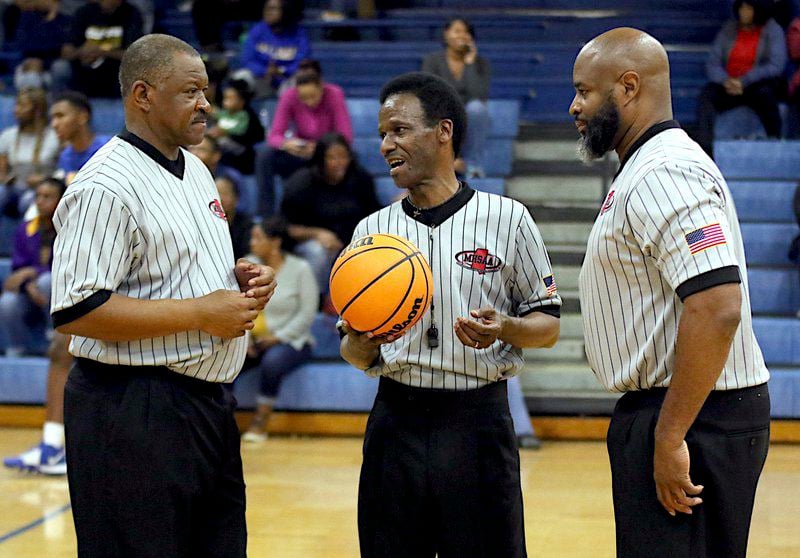 Referees Robert Eakins, left, Willie Hopson and Tremayne Ruffin have a discussion before the start of Quitman's basketball game against Florence Tuesday night. Eakins is secretary of officials with the Mississippi High School Activities Association’s East Mississippi. He says it's becoming more difficult to find enough officials to work games. 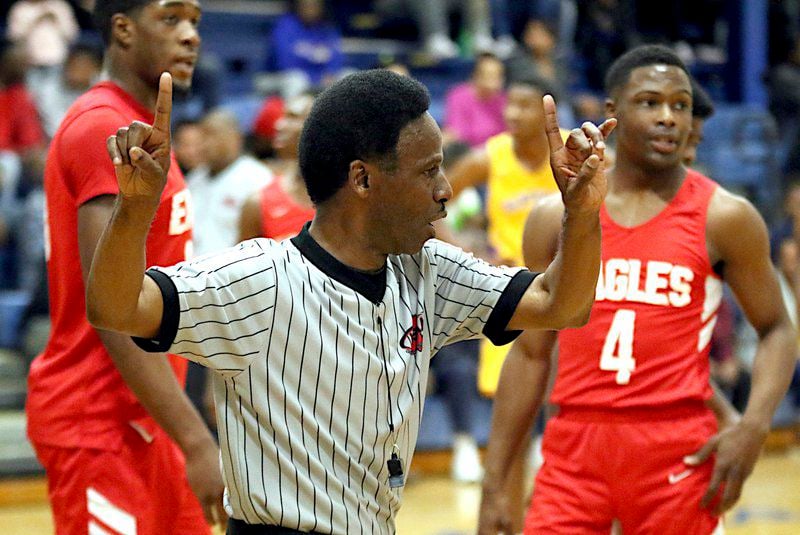 Willie Hopson, a referee with the Mississippi High School Activities Association, makes a call on a foul at a Quitman game Tuesday night. 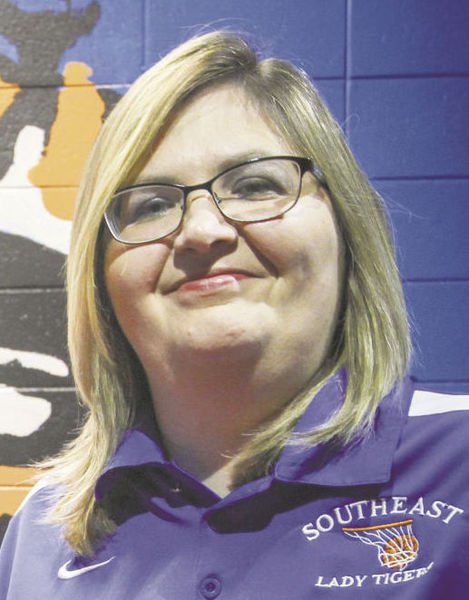 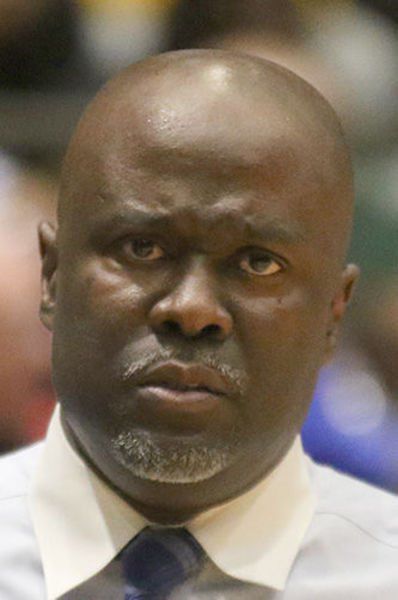 On what should have been a calm Tuesday afternoon, Robert Eakins was scrambling.

After an official called out sick three hours before tip off, Eakins worked his phone, rushing to find a replacement.

Anyone interested in becoming an official can register at www.misshsaa.arbitersports.com.

He has a small pool of officials from which to assign a midweek slate of regular-season games, and days like this are becoming increasingly regular.

“Normally, this happened maybe two or three times a season,” Eakins said. “But now that we’re down to 40 officials, this is a weekly thing.”

East Mississippi and the rest of Mississippi are starting to feel the effects of a nationwide shortage of officials among high school and youth sports leagues, across all sports. In basketball, for instance, Eakins said more than 50 officials used to be a part of the East Mississippi division, which includes Lauderdale County, but now that it’s down to 40, he struggles to find enough referees to cover as many as 10 games a night.

Several contests are officiated by the minimum of two referees instead of the recommended three.

Rickey Neaves, an associate director at the MHSAA and its officials coordinator, said there has yet to be a game canceled due to the shortage, but that divisions have had to borrow officials from each other.

The problem, he said, is that the gap between older and younger officials is growing, and not enough young adults are joining the profession and staying in it. The average age of an official in the MHSAA is 45.

The major reason for the shortage originates from how officials are being treated by coaches and spectators, Neaves said. A survey conducted by the National Association of Sports Officials in 2017 of more than 17,000 officials found that 70.5 percent feel officials are treated unfairly by coaches and 84.6 percent feel they are treated unfairly by spectators. Additionally, 57 percent said sportsmanship is growing worse.

“Fans and coaches alike feel freer to downgrade officials, and holler and scream at them, as opposed to the way it was 10 years ago,” Neaves said. “You can see where that is getting worse and worse with parents and coaches blaming officials or staying on an official to the point where they’re just not going to take it, so they just get out.”

Neaves said the increase in poor behavior from spectators has risen out of the growth of youth sports and the emphasis parents have put on it with the hundreds and thousands of dollars they pour into it for their children, and that the change in coach behavior comes from a trend of more coaches getting fired for not winning, and feeling the pressure of being let go.

Eakins, a football and basketball official with more than 40 years of experience, said the behavior starts with the coach.

“When you have coaches who are volatile, that spend more time worrying about the officiating, the fans that support that team are the same way,” Eakins said. “With coaches who complain about officiating, kids are more likely to show their temper on the court, and once a kid shows their temper, another kid is going to retaliate. Those are the things we have to contend with.”

Dana Buchanan, head coach of the Southeast Lauderdale girls basketball team, said she does feel that spectator behavior has gotten worse over the last 10-15 years, but that coaching behavior has generally been the same since she started 20 years ago.

The treatment of officials from the stands isn’t always the coach’s responsibility, she said.

“Whatever you’re going to let a coach get away with, they’re going to do. I know the officials with which I can get away with stuff and the ones I can’t, so I put that back on the official,” Buchanan said. “I’ve had parents who scream and holler at their children in a way that I would never talk to a kid. I can sit over there and do everything I’m supposed to do, but that doesn’t mean that parent’s not going to get up and scream and holler at the official from the bleachers.”

For every 10 new people who sign on to become an official, Eakins said, only about one or two stay with it, and most last two to three seasons. Michael Washington has been a football and basketball official for the last eight years and said today’s officials need to have thick skin and be able to ignore fan noise.

Are fans too hard on referees?

He added that he knows of an official who’s retiring from the job because of the harassment he regularly takes from coaches.

“The coaches don’t have respect for the official," Washington said. "They’re so worried about the official calling the game instead of them coaching their players. It’s just beginning to become a hassle, and a lot of officials don’t want to take all that talking from the coaches.

“In the rulebook it says coaches should not make a mockery of the game, but you get coaches saying, ‘The referee doesn’t know what he’s doing, that’s a bad call,’ to being called a simple-ass referee. You get cursed at.”

Pay is another reason cited for the shortage.

Compensation ranges per sport in the MHSAA, with football the highest at $100 per game and basketball the lowest at $60, Neaves said. Basketball officials usually cover both the girls and boys games on the same night, however, and get $60 for each game. Soccer referees make $65 per game.

Washington said he became an official to give back to the community, and that’s why people should become officials, but he said he believes around half are in it to make extra money, and would perform better if the pay was higher.

With the pay and treatment, many people feel becoming an official isn’t worth it.

“We’ll take in some, but then they’ll say, ‘This isn’t for me. I can’t take all that hollering,’ whether it’s coming from the coaches or it’s coming from the fans,” Eakins said. “You’re going to have to find someone that’s going to be dedicated. Someone that has a passion for this, and in order for them to have passion for it, they have to grow into it, and the only way they’re going to grow into it is they have to like what they’re doing.”

Meridian High School boys basketball head coach Ron Norman said coaches, players and spectators all have to be more conscious of how they treat officials.

“I think the money factor is bigger than anything,” Norman said. “People will put up with some stuff for some money. I think the problem with the shortage is probably that people will not put up with everything, with the pay.”

Neaves said efforts are being made to both raise officials’ pay and improve coach behavior. He said he’s pushing for each sport to see a $15-20 increase in the MHSAA, and for coaches to take more mandatory sportsmanship courses. He said the MHSAA is working toward not only making officiating better, but for it to be thought of better.

Buchanan, who is also a teacher, said much of the problem is that young adults don’t take criticism well, and so in turn can’t handle coach and spectator objections during games. She said for sports to see an overall improvement with coach behavior, a complete effort is needed.

“Can I try to make sure I do a better job of not screaming and hollering at officials? Of course. Do I think that would help? I think if all of us did it would help,” she said. “I think it would have to be everybody together making that conscious decision to try their best not to, and that officials understood that.”

Buchanan added that the referees she’s experienced generally perform well, but understands the physical strain on the older group of officials in overseeing games that can make scheduling them difficult.

“I think we have some really good officials in our district,” Buchanan said. “I think the problem is they probably want to work as much as they want to work, and they’re getting older, so we just don’t have enough good officials.”

OUR VIEW: Shortage of officials a warning sign for coaches, fans