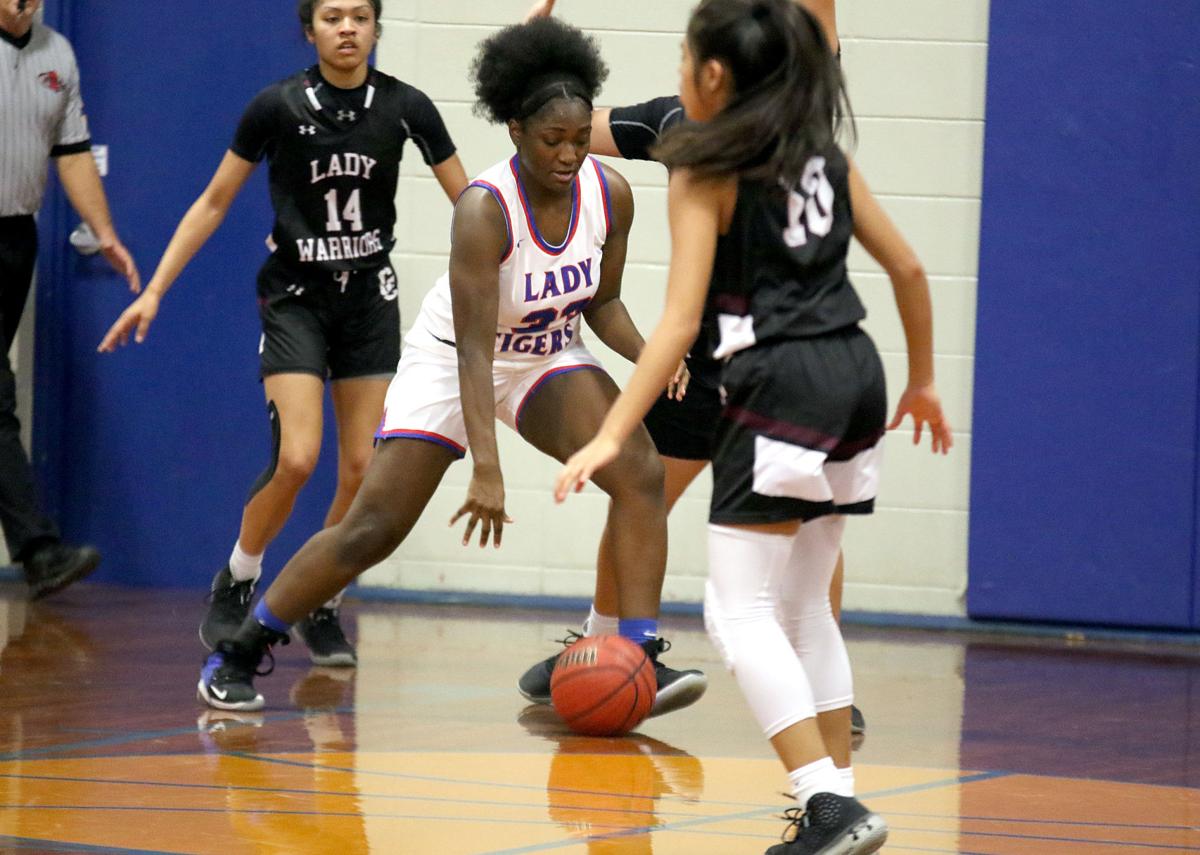 Southeast Lauderdale’s Kenyata Walker attempts to gain control of the ball during the Lady Tigers’ home game against Choctaw Central in December. 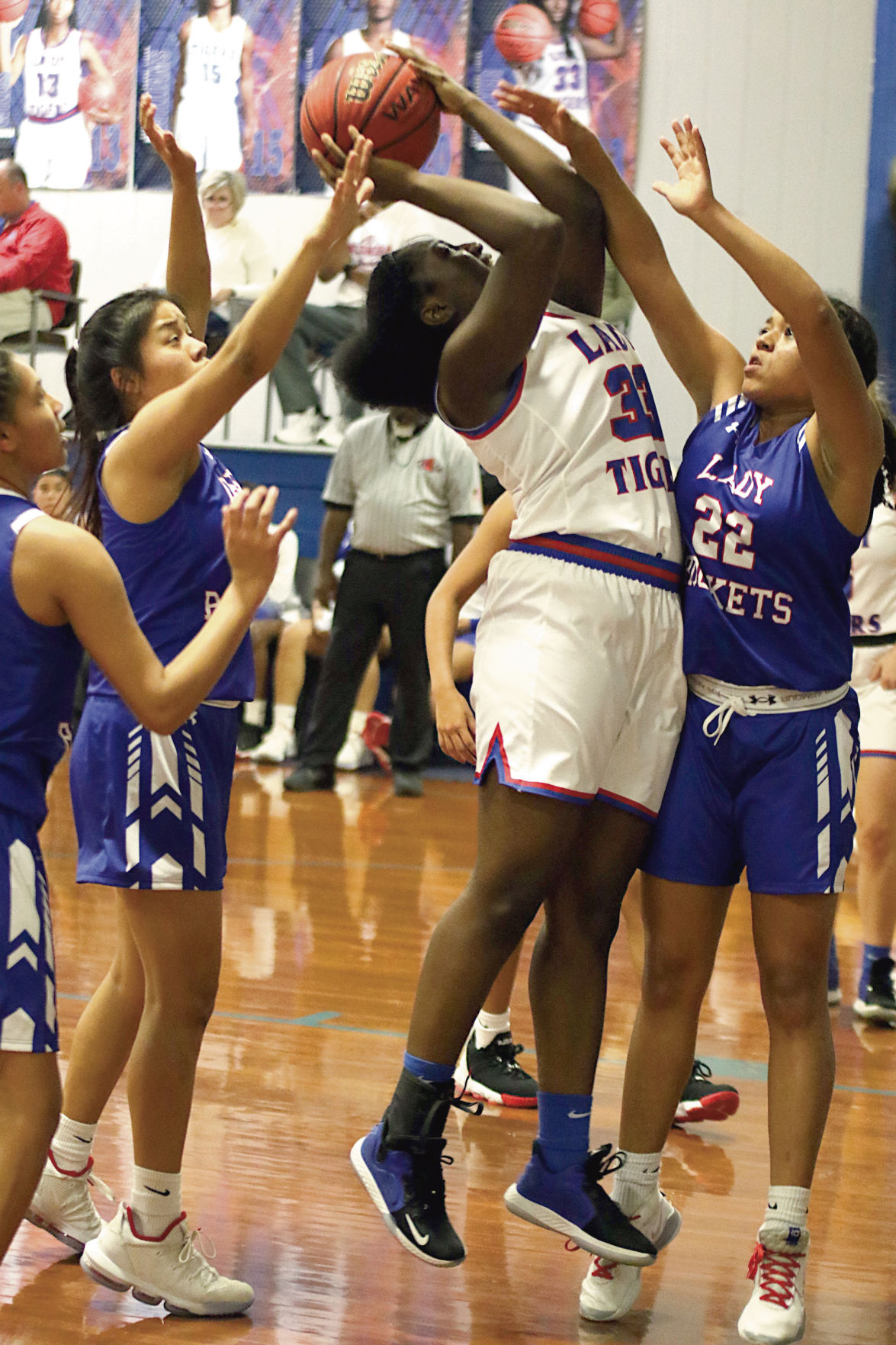 Southeast Lauderdale's Kenyata Walker tries to get off a shot against Neshoba Central in an earlier game this season.

Kenyata Walker’s performance tends to have a ripple effect on her Southeast Lauderdale teammates.

When Walker is playing well, the Lady Tigers basketball team usually plays well as a unit. If she’s unable to play, or she’s having an off night, the rest of the team can seem discombobulated as well.

“If she doesn’t play well, we don’t play well,” Lady Tigers coach Dana Buchanan said. “Last year she missed three games, and I don’t think we played well in any of those three at all. It’s just her presence in general, our team kind of follows that and sticks to that.”

Walker, a senior forward/center, may not be Southeast Lauderdale’s go-to scorer, but her calming presence has helped lead the team to a 19-6 record and a No. 1 seed heading into this week’s Region 3-5A tournament. She’s come to realize just how much Buchanan relies on her to be the coach on the court, and it’s a role Walker embraces.

“Most of the time I try to keep everyone on top of what they’re supposed to do,” Walker said. “If I’m not out there, sometimes it’s like watching chickens with their heads cut off.”

Buchanan said she thinks Walker’s personality is what makes her teammates embrace her as a leader.

“She’s our glue,” Buchanan said. “She’s such an all-around good person, on the court and off the court. She’s not loud, but everybody pays attention to her, so when she does things a certain way, we tend to follow that. It’s not always about being vocal — she can be vocal, but for the most part, it’s a quiet leadership.”

There’s added pressure in being a leader, but Walker’s calm demeanor keeps it from being too much to handle.

In fact, Walker said she wasn’t sure her quieter side would allow her to be the leader the Lady Tigers need on game nights.

“With me being captain, I told Coach Buchanan I didn’t think they would listen to me because I don’t get loud, but I feel like most of them have a lot of respect for me,” Walker said.

It helps having a teammate like senior guard Shakira Wilson, who usually leads the Lady Tigers in scoring.

“I can rely on her to score and get the ball to people so I don’t have to focus on scoring as much,” Walker said. “I can still get my boards, though, and when she’s not on the court, it can get crazy, too.”

Wilson said she and Walker share in their confidence, and like Buchanan, she notices when the team’s dynamic matches Walker’s performance.

“When we’re both on the court together, no one can stop us,” Wilson said. “When both of us are down, everyone else is. Kenyata has a big impact on the team. She shows good sportsmanship, and she’s kind and always has the right mindset on the court.”

When Wilson is having an off night, she’ll often rely on Walker to keep her from getting discouraged.

“Even though we have our ups and downs, she keeps me on track,” Wilson said. “Sometimes during games she’ll step me to the side and boost my confidence up when I feel like I’m not doing something right.”

One focal point for Walker last summer was getting into better shape so she could stay on the court for longer periods of time during games.

“I can go just about a whole game now with the breaks we get and halftime,” Walker said. “We were running miles at the beginning of the season, so I think that helped, even though I didn’t like them at all.”

As a student, Walker describes herself as almost obsessive in trying to avoid getting anything below an A on her report card.

“I’ve never been the type to just try and get by,” Walker said. “I want to get straight As. I’m in Beta Club, too, so I want to keep my grades up (for that).”

That perfectionist attitude is something Buchanan has observed in Walker during practices.

“She works hard in the classroom and worries a lot about grades,” Buchanan said. “She had my sister (as a teacher) last year, and she was so worried about being in AP English and the grade she was going to get, because she didn’t want to get a B. She didn’t, but she worked hard to make sure she got an A. That translates to in (the gym), because she works hard every day in here and does what she’s supposed to do.”

Walker said she’s leaning toward attending Southern Miss and majoring in nursing after she graduates in May.