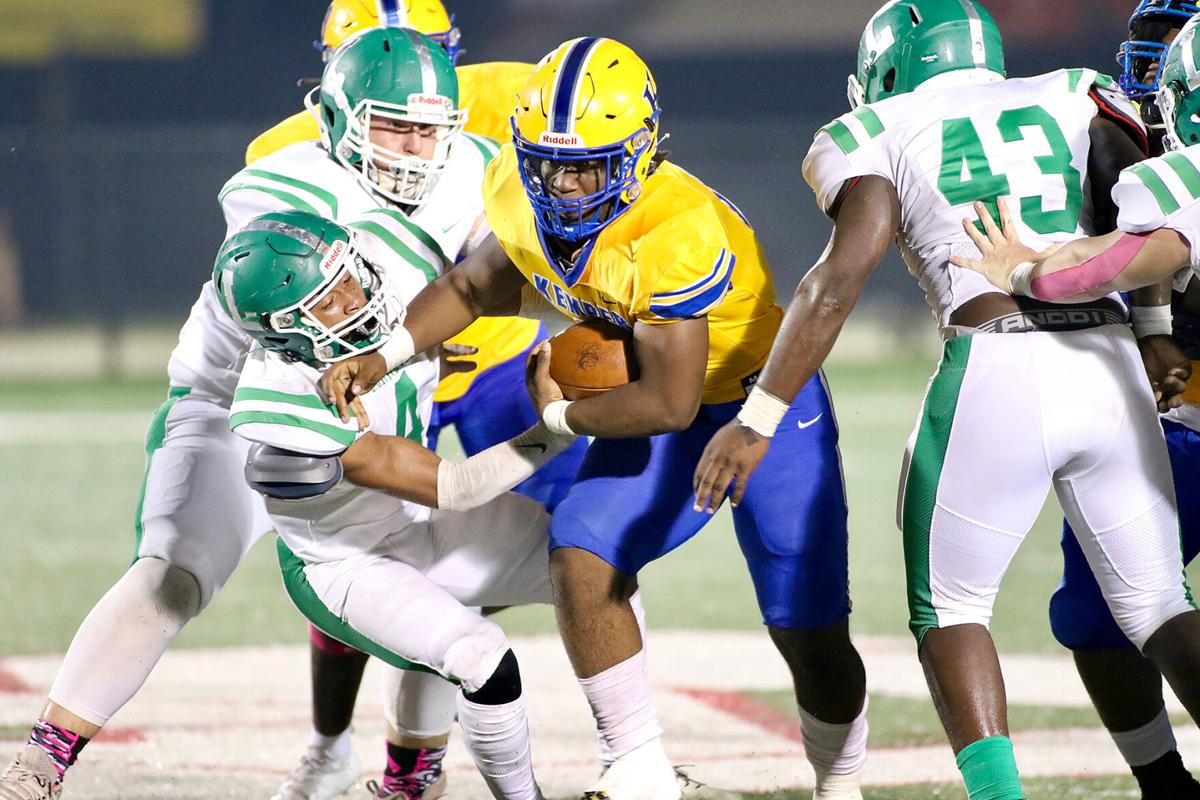 Kemper County running back Dicenzo Miller (2) finds a hole for a first down for the Wildcats during their game at Kemper County last Friday, Oct. 1, 2021, against Lake. 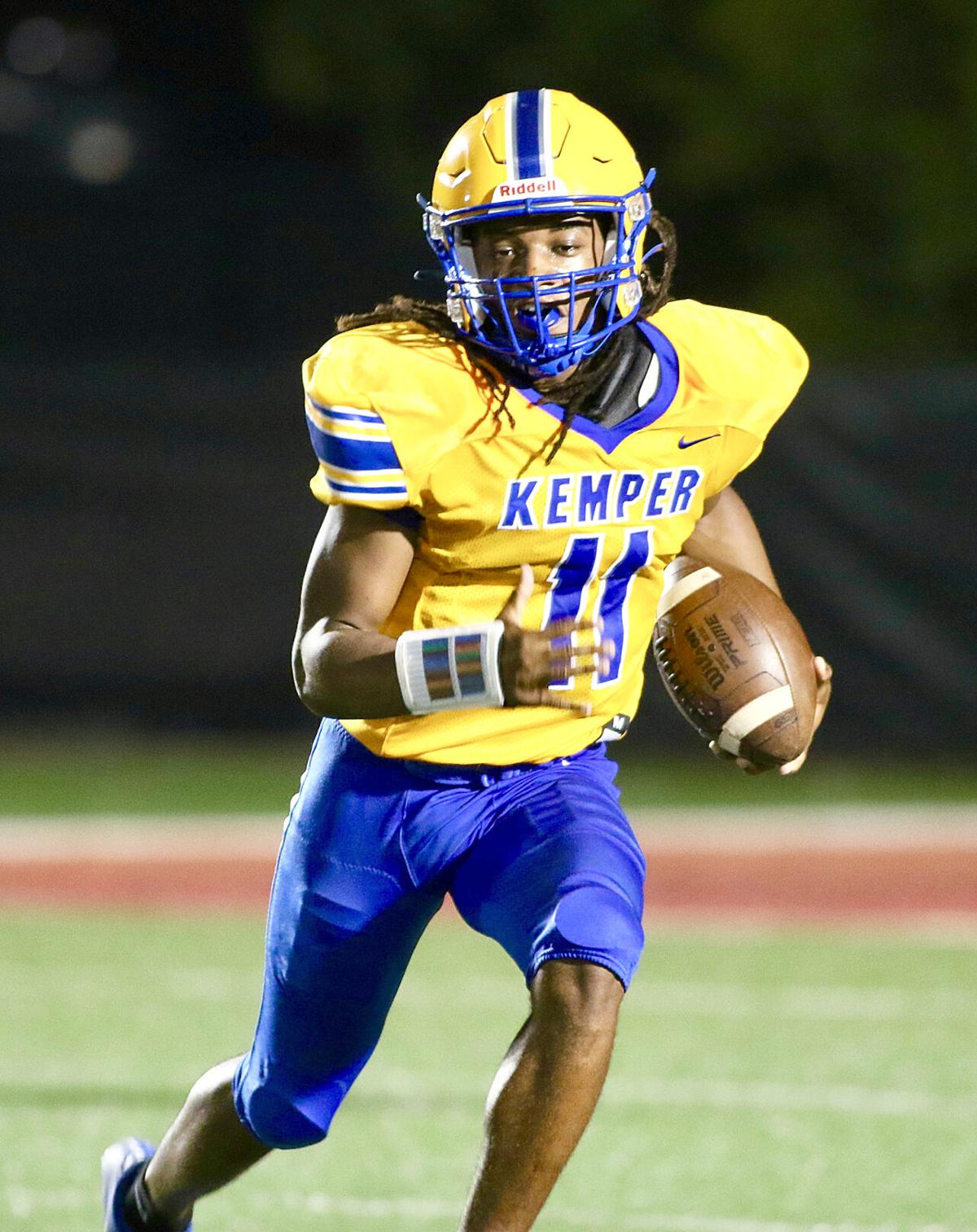 Kemper County quarterback Aaron Steele (11) escapes the Lake defense to pick up some yards during their game last Friday at Kemper County.

Kemper County running back Dicenzo Miller (2) finds a hole for a first down for the Wildcats during their game at Kemper County last Friday, Oct. 1, 2021, against Lake.

Kemper County quarterback Aaron Steele (11) escapes the Lake defense to pick up some yards during their game last Friday at Kemper County.

Steele is best known as the Wildcats’ quarterback, but he’ll also line up at running back and wide receiver on offense and cornerback or safety on defense. Last week against Lake, Steele ran full speed to catch a Lake ball carrier, stopping him on the 1-yard line instead of saving his energy by letting him score. On the next play, Lake fumbled and Kemper County recovered, helping the Wildcats to a 32-21 win.

“Little things like that make a difference,” Westerfield said.

It’s why Steele and fellow senior Dicenzo Miller Jr. are two standouts for Kemper County who have helped the Wildcats to a 4-2 start to the season, 1-0 in MHSAA Region 5-2A heading into Friday’s non-divisional contest at Noxubee County. Versus Lake, Steele finished with 245 yards and three touchdowns passing and also had 155 yards and a touchdown on 22 carries, while Miller — who has been hampered by a high ankle sprain on his left leg — tallied 90 yards on 11 carries.

“It makes play calling a heck of a lot easier when you have good players,” Westerfield said. “People like to give credit to the scheme, but all the credit goes to the Jimmys and Joes. If you have good players, you don’t have to do as much offensively and defensively, but if you don’t, you have to scheme it up, so those guys make it easy for me to call plays.”

If the Wildcats are going to win their division and make a postseason run, Miller and Steele will no doubt play a big role in their success, but Miller said the success so far is due to the entire team’s hard work from the summer through now.

“We feel like we can win state, so everyone is buying in — coaches, players, managers and the fan base,” Miller said.

A loss to West Marion in the second round of the Class 3A playoffs last year left a sour taste in the return players’ mouths, Miller said, and after the school dropped down to Class 2A in the offseason, Miller said he thinks the Wildcats have as good a chance as anyone in the classification to win a championship.

“We feel like we’re one of the most athletic teams (in 2A),” Miller said. “It gives us a lot of confidence, but the game isn’t won on paper. It’s won on the field, so we have to work hard Monday through Thursday because the game isn’t won with just athleticism, but fundamentals and technique, too.”

Athleticism and a never-quit attitude are why Steele was able to track down the Lake ball carrier at the 1 last week and set up a fumble recovery, and Steele said in hindsight he was grateful he didn’t give up on the play since a turnover happened on the next down.

“I want to win,” Steele explained. “I don’t want to lose. I feel like if I give up on a play, that’s a loser’s mentality.”

He backs it up on the field, which is part of why Westerfield wants him playing as many snaps as possible regardless of whether the Wildcats are on offense or defense.

“He’s extremely fast, as evidenced by him going to state in five events last year (in track), so he has that to his advantage,” Westerfield said. “He’s faster than most of the kids he steps onto the field with. He’s a tireless worker, and he never gives up on the play, even on some that he should. As a quarterback, you should sometimes go down and live to play the next play, but he doesn’t. He tries to make a play out of everything.”

“I just go out there and play,” Steele said. “Whatever they need me to do, I’ll do.”

It also helps having good linemen, good receivers and good running backs alongside him, Steele added.

Despite nursing an injury, Miller has still been a productive player for the Wildcats, and Westerfield said he expects that production to keep increasing as the season goes on.

“We know what he brings to the table,” Westerfield said. “Last year he ran for 1,545 yards on 150 carries, which is 10 yards per carry, so he’s a really good player, and every week he’s starting to look more and more like himself with an injury that only heals over time. We’re starting to see some good things out of him.”

Miller estimated he was around 85% recovered from the ankle sprain, and it wasn’t something he was ever going to let keep him off the field.

“I just get it taped inside and outside and ice it before and after the game,” Miller said. “I don’t want to let my team and our fanbase down, because if we lose a game I feel like I’m the one who lost the game because I wasn’t out there helping them.”

The more he plays, the more comfortable he becomes on his ankle, and Miller said he also likes to lean on Steele to produce, much like Steele relies on him.

“He’s a good kid,” Miller said of Steele. “He’s good in the classroom and on the field. We’ve built a bond to where we’re happy for each other when the other one does well. It’s a bond like brothers."