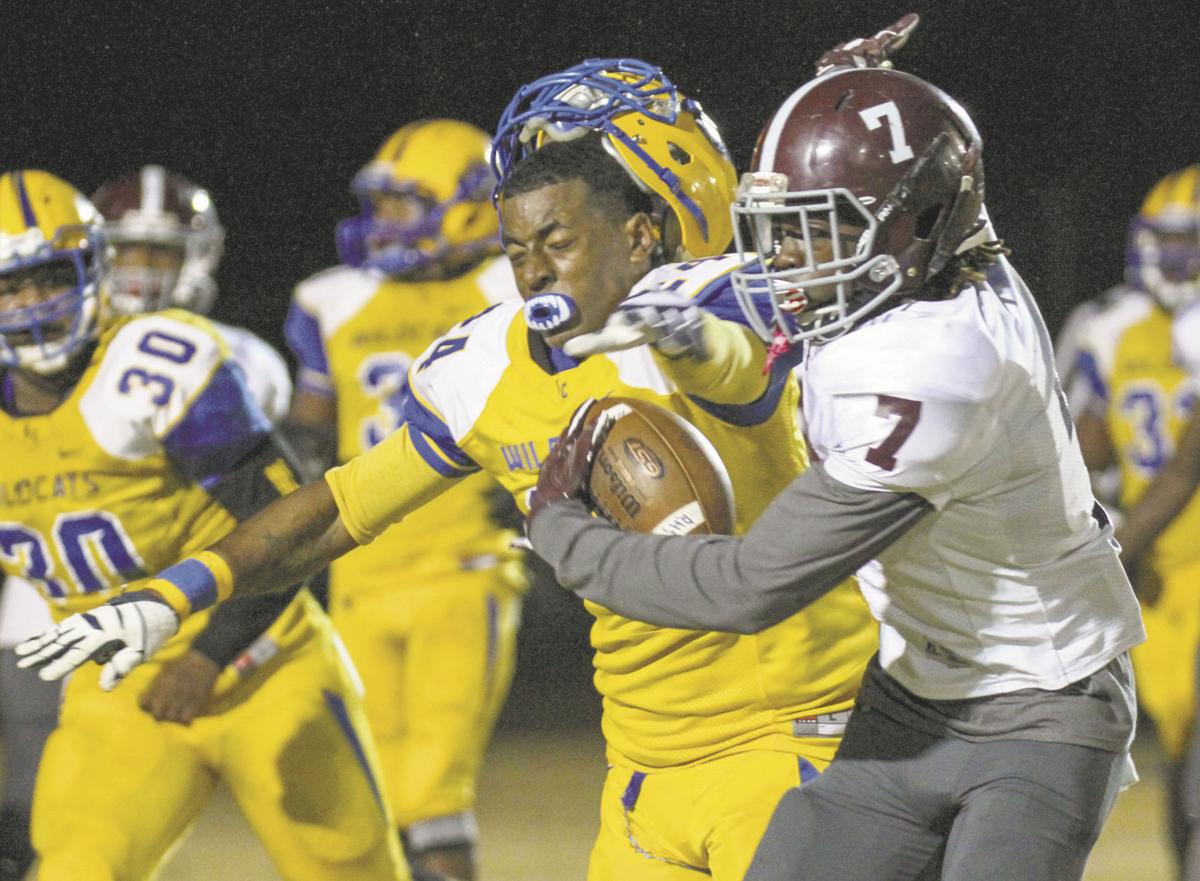 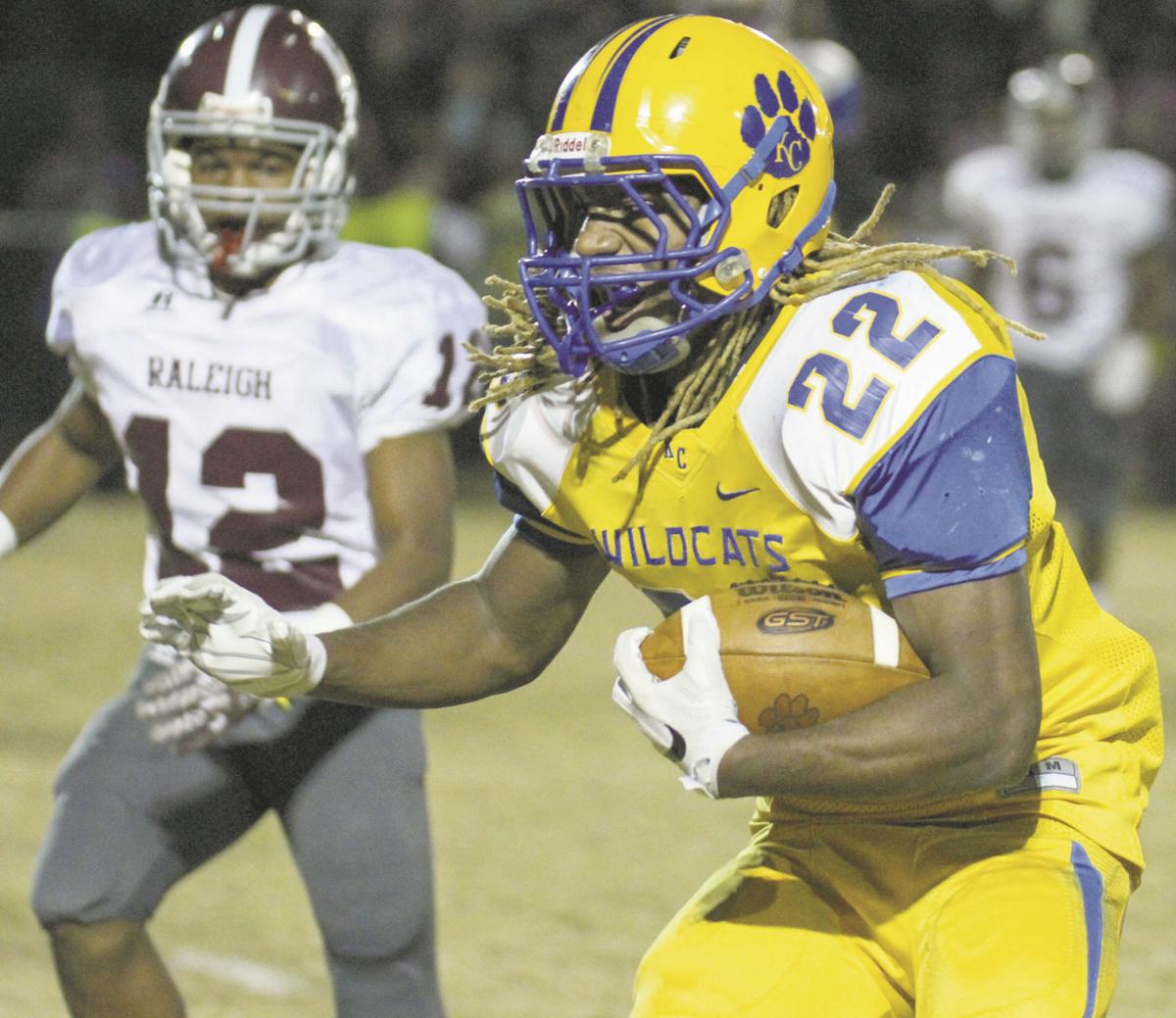 DEKALB — Kemper County High School has been knocking on the door to play for a state championship in football.

On Friday night, they kicked that door in.

The Wildcats used an opportunistic defense, joined with a few big plays on offense, as they beat Raleigh High School 28-20 to win the Class 3A South State championship game before an overflow crowd at Landon B. Mitchell Field.

The Wildcats improve to 14-1 on the season and will face Charleston High School next Saturday at 11 a.m. at Davis-Wade Stadium in Starkville.

For the Wildcats, it was a sweet win after falling to Collins 62-34 in the playoffs last season.

“I thought we just keep believing, competed each and every play,” Kemper coach Chris Jones said. “But at the end of the day, this is not over with. Our goal is to win a state championship and win a ring. If we are going to win a ring, we have to win next week. We have to stay humble.”

Raleigh actually outgained the Wildcats on the night with 325 yards — 247 on the ground and 78 passing. Kemper had 264 total yards with 126 rushing and 138 passing. But in the end, it was a bend-but-not break defense that led the Wildcats to the title game.

“They always say that defense wins championships, and the proof is in the pudding.” Jones said. “We didn’t start out great on defense, but we made some adjustments, and the kids bought in. We didn’t give up much after that. We had to figure it out to be honest. You don’t see the Wing T every day, but once we figured it out, I thought everybody did their job.”

The Lions struck early and stunned the rowdy Kemper crowd as Zarious Keys scored on a 30-yard run with 10:46 left in the first quarter for an early 6-0 lead.

After being forced to punt on their first possession, the Wildcats got a break on Raleigh’s second offensive possession when Justin Gammage was brought down short on a fake punt attempt.

From there, the Wildcats needed just three plays to find the end zone as Eric Clark Jr. found D.J. Clayton in the corner of the end zone for a 19-yard touchdown pass with 5:38 left in the first quarter. Clark was stopped short on the two-point conversion to leave the game tied at 6-6.

Raleigh responded with a bruising, 11-play, 86-yard drive that took up more than five minutes of clock as Kris Moncrief scored on a 4-yard run with 51 seconds left in the first quarter. Julian Keyes ran in the two-point conversion and Raliegh led 14-6.

But Kemper answered right back with some big playing in the passing game, the final being a 16-yard touchdown pass from Clark to Clayton with 10:57 left in the first half. Clark ran in the two-point conversion to tie the score at 14-14.

The Wildcats got a stop on Raleigh’s next possession when Gus Nave intercepted a Gammage pass and returned it 45 yards to the Kemper 49.

From there, the Wildcats used nine plays, all on the ground, to find the end zone as Rondarius Gowdy scored on a 5-yard run with 4:05 left in the first half. Gowdy also ran in the two-point conversion and Kemper took a 22-14 lead into the half.

The Lions got a big break midway through the third quarter when a snap sailed over the head of the Kemper County punter, giving Raleigh the ball at the Kemper 16. Gammage finally punched it in as he got free on a scramble on fourth down to score on a 12-yard run with 3:53 left in the third. The try for two failed and Kemper held a slim 22-20 lead.

The Wildcats produced two big fourth-down stops in the fourth quarter, the first was a stop of Moncrief with 4:58 left in the game at their own 39.

“I would rather get beat straight up by a good football team,” Raleigh coach Jeff Stockstill said after his team was flagged nine times for 76 yards. “There were too many calls that had too much of an impact on this football game. Our defense played well and forced some turnovers. Kemper County is a great football team, and Chris Jones is a great football coach and an even better person. It was a great game by two great teams. There were just too many calls that affected the outcome of this game. I just don’t feel like it was straight up. But take nothing away from Chris. Kemper County won the game and deserve to play for the state championship.”

From there the Wildcats put the game almost out of reach with a couple of big pass plays. The first was a 16-yard pass on third down to move the chains, and the second was a halfback pass from Nave to Clayton for 37 yards to put the Wildcats at the Raleigh 6. From there, Gowdy ran to the 2 where he was hit and fumbled, and fullback Gary Bourrage picked up the fumble and scored with 3:10 left in the game. The try for two failed and Kemper led 28-20.

“It’s been a long journey and a long summer,” Nave said. “We have been working that play all week in practice. I didn’t know if we were going to run it or not, but when he did, I knew I had to put some air under it, and DJ made a play on the ball for me.”

The Lions had another attempt but couldn’t convert on a fourth-and-4 play at the Kemper 37, coming up a yard short.

“I thought the difference was the will and want to finish,” Jones said. “Our kids wanted to win and did what it took to win. At the end of the day, it doesn’t matter what we do as coaches, it comes down to who really wants it, and our kids wanted it and did their thing.”