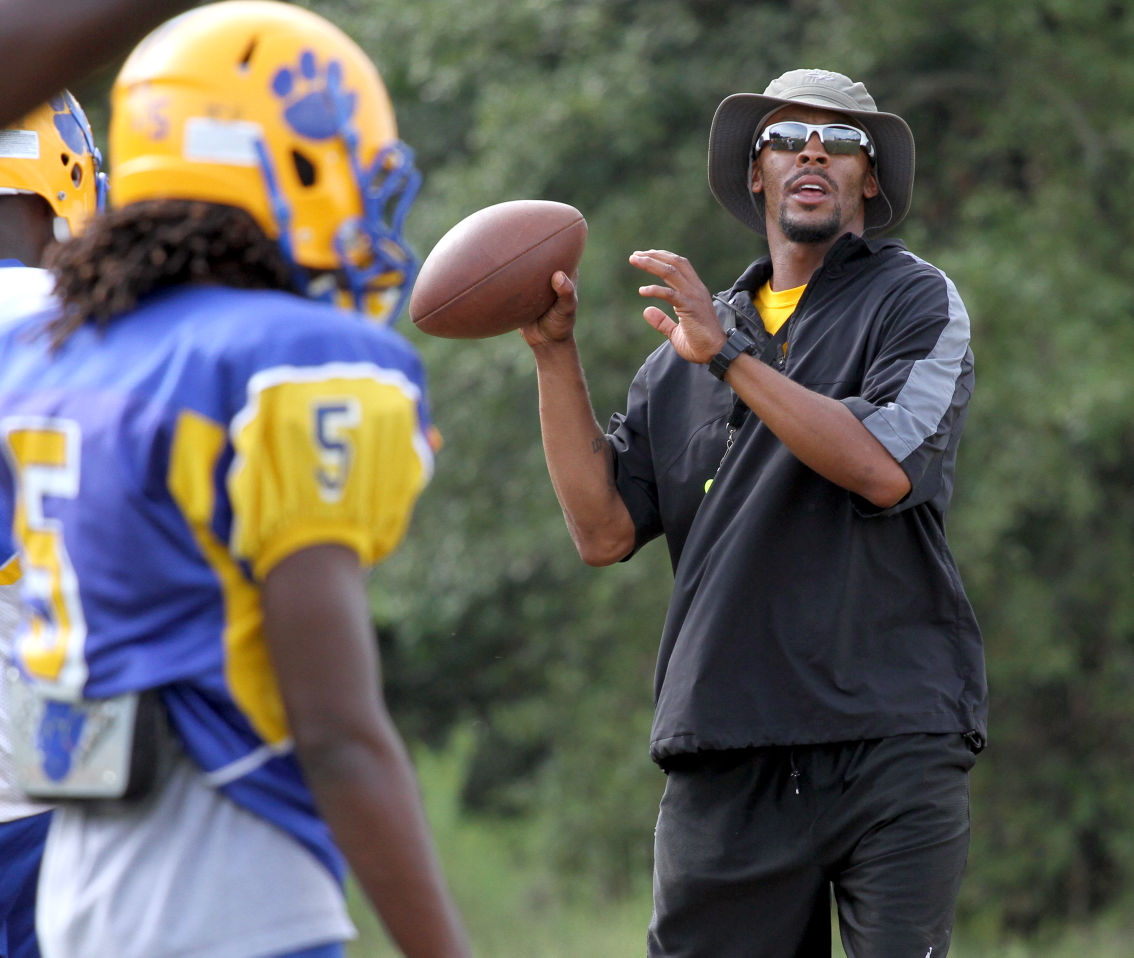 Kemper County High School head coach Chris Jones, left, looks to throw the ball during practice Wednesday afternoon at the school. Jones is in his second season as coach of the Wildcats, who are currently 4-0 on the season. 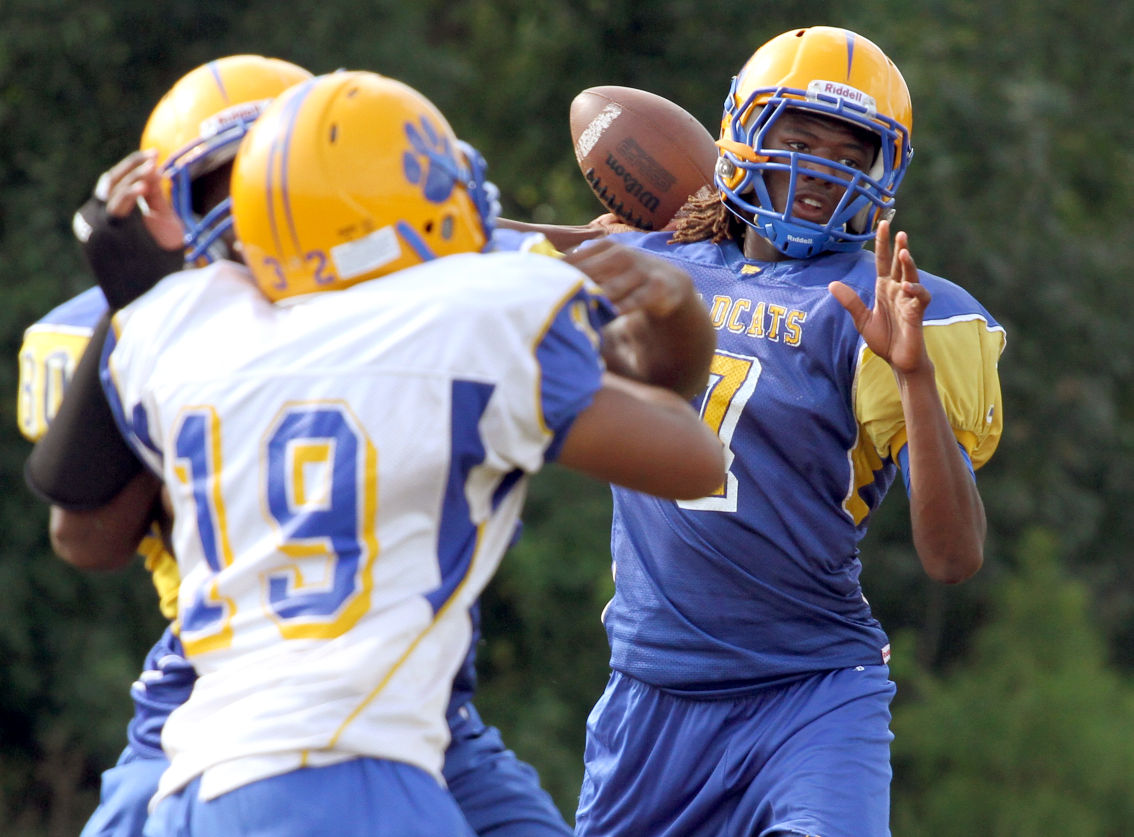 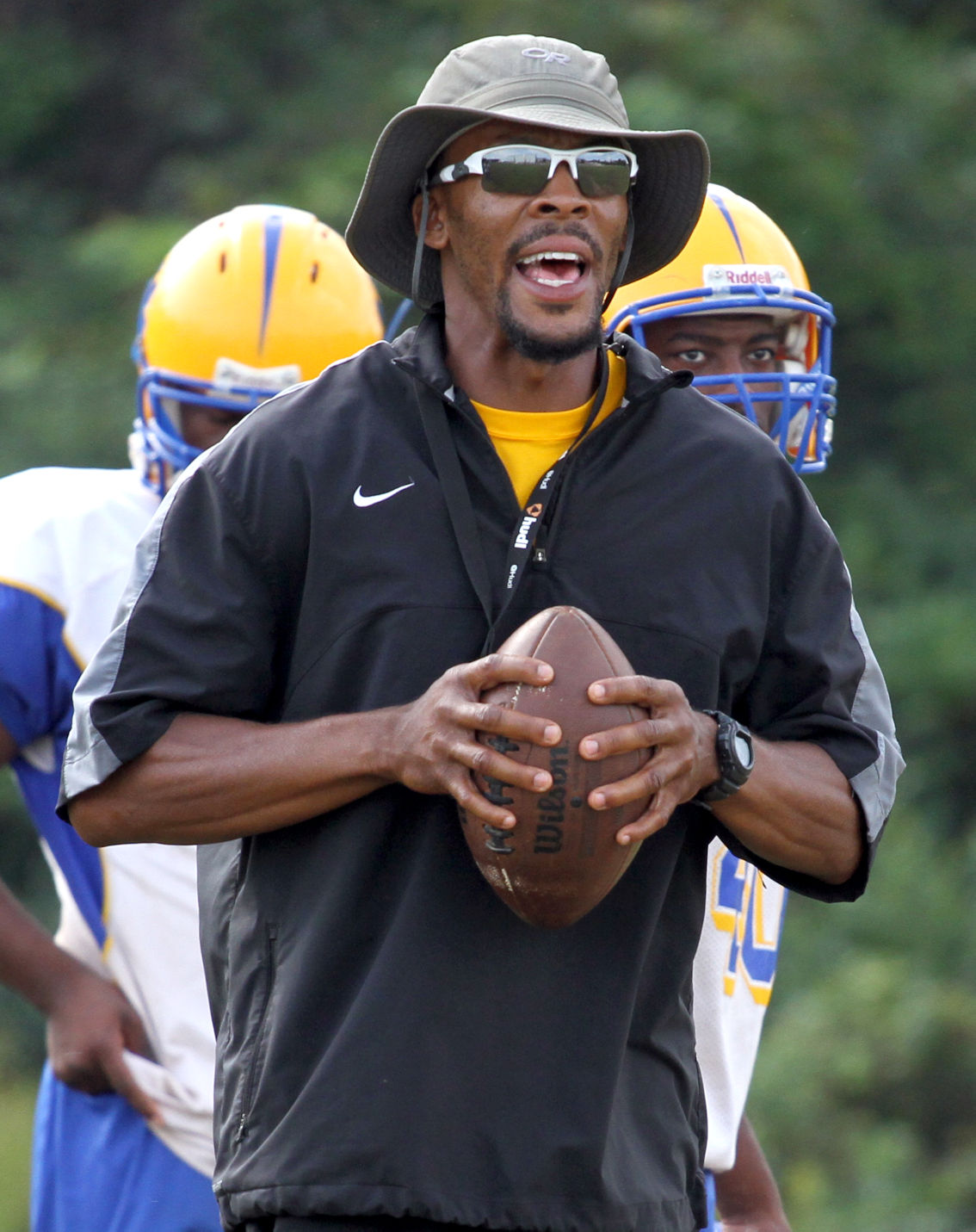 Kemper County High School head coach Chris Jones, left, looks to throw the ball during practice Wednesday afternoon at the school. Jones is in his second season as coach of the Wildcats, who are currently 4-0 on the season.

Chris Jones’ journey from Noxubee County High School to head football coach at Kemper County High School allowed him to accumulate plenty of knowledge about the game. Now, he’s trying to use that knowledge for the betterment of his players and the school for which he coaches.

Jones’ mission? To turn Kemper County, known more for its basketball prowess, into a school with a winning football tradition. So far, he seems to be on the right track.

After coming from Louisville High School in 2013, Jones led last year’s Wildcats squad to a 9-4 record and a second-round berth in the MHSAA Class 3A playoffs. Not bad for a team that had won just one game in 2012, but Jones and his staff weren’t finished.

The Wildcats currently sit at 4-0 heading into Friday’s game at Velma Jackson High School. They have beaten teams by a combined score of 194-31. The most Kemper County has given up in a game is 13 points in its season opener against Heidelberg High School.

“I’m not surprised at the turnaround, because I know what I’m capable of, and if given the chance, I know what I can do with good athletes,” Jones said. “It’s not just me. I feel like I have a good group of kids and a good group of young kids, so I feel like we can be good for a long time. I’ve also been blessed with the right staff, and we’re out here working hard.”

So it’s no coincidence that the Wildcats find themselves undefeated and winning big, Jones added.

“We didn’t just wake up and win games,” he said. “We work to win, and I feel like we’re 4-0 for a reason. We believe if we come out here and do the things we’re supposed to do, we’ll be successful on Friday nights.”

That confidence has trickled down to his staff and players. Senior linebacker Marcellous Grady said the team has responded well to Jones’ demands of always working hard, even if the players sometimes don’t feel like it.

“The attitude is, if we keep going hard, hustling, grinding, taking it one game at a time, then good things will happen,” Grady said. “Coach Jones makes us put in work. He’s a good coach who knows what he’s talking about.”

Jones said he will sometimes have his players out on the practice field as late as 8 p.m. on weeknights trying to improve. It’s a lot to ask, but Jones said he’s trying to develop winning habits and stressing the importance of not cutting corners.

“The kids have bought into what it takes to become a winner,” Jones said. “They give great effort, and every Friday, I know we have a chance to win based on the week we have. Some people might complain (about the hours), but in my mind, when you’re coming from the bottom, you have to do whatever it takes to get to the top.”

Because of that, Jones said there are no plans to ease up on the intensity.

“For so long, Kemper County has been at the bottom when it comes to football,” Jones said. “Until we get to that mountaintop, as far as what we want to achieve, maybe we’ll take a break, but right now, we’re going to keep pushing and keep working as hard as we possibly can and let the chips fall where they may.”

In the meantime, Jones said he tries to develop himself by learning from other coaches who are successful

“We try to model ourselves after good programs around high school and college,” he said. “I like to look around and see who’s doing well as far as coaches go. I might give them a call out of the blue and let them know who I am and get advice from them. Some are nicer than others, but either way, it doesn’t hurt my feelings. You have to ask if you want to know.”

Known for his hands-on approach, Jones will often run and do drills with the players in order to develop a rapport with them. That’s something the team has taken notice of, Grady said.

“That makes a big difference,” Grady said. “To have a coach out here that moves around with the team, it keeps the team motivated and gives the defense and offense a good look.”

Jones said his hands-on approach stems from his belief that a coach needs to be able to do more than just give instructions.

“The way kids are today, this is a generation that says, ‘You need to show me what you’re talking about,’” Jones said. “Back in the day, a coach could tell you how to go out there and line up and do XYZ, and you either understood or if you didn’t, you’d get punished. These kids, they want to see you do it. I’m the type of guy who understands it both ways, but you have to adapt to this generation.”

It also helps that Jones has a background in college and professional football. Sophomore quarterback Eric Clark said Jones’ pedigree gives him a lot of credibility with the players.

“It helps you out a lot, because he knows what he’s talking about when he says something,” Clark said. “We just sit out here and listen to him, and he helps us out a lot.”

Approximately 13 basketball players have made their way out to football practice, Jones said, providing the team with plenty of athleticism. But if the Wildcats are going to reach that mountaintop Jones spoke of, it will take more than just talent. Jones cited Alabama head football coach Nick Saban’s philosophy in recruiting players to Tuscaloosa, Ala.

“When he recruits kids, he wants to know, do you like football or do you love football?” Jones said.

“I need (them) to love football the same way,” Jones explained. “A lot of kids have talent, but they’re not willing to sacrifice what it takes to be good. They want to win, but they don’t want to come to summer workouts, and they’ll miss practice. It’s like the saying, everyone wants to go to heaven, but nobody wants to die. But I think (my players) have bought into what it takes to be good.”

Clark said he’s also noticed the team has developed a winning attitude by the way they practice.

“The effort you put in at practice (is the difference),” Clark said. “You practice perfect, you play perfect. You practice bad, you play bad. We practice really hard. Sometimes I want to go home when we’re out here late, but if it isn’t done the way he likes it done, we’re going to stay out here and get it done.”

What it boils down to, Jones said, is he doesn’t want him, his assistants or his players to be ordinary.

“At the end of the day, it’s all about hard work and effort,” Jones said. “If you’re not willing to put in the work needed to become a great coach or great player, you’re really just another guy, in my opinion. I don’t want to be just another coach, and I don’t want my players to just be average players. I feel like if you’re capable and have the ability to do better, you should do better.”