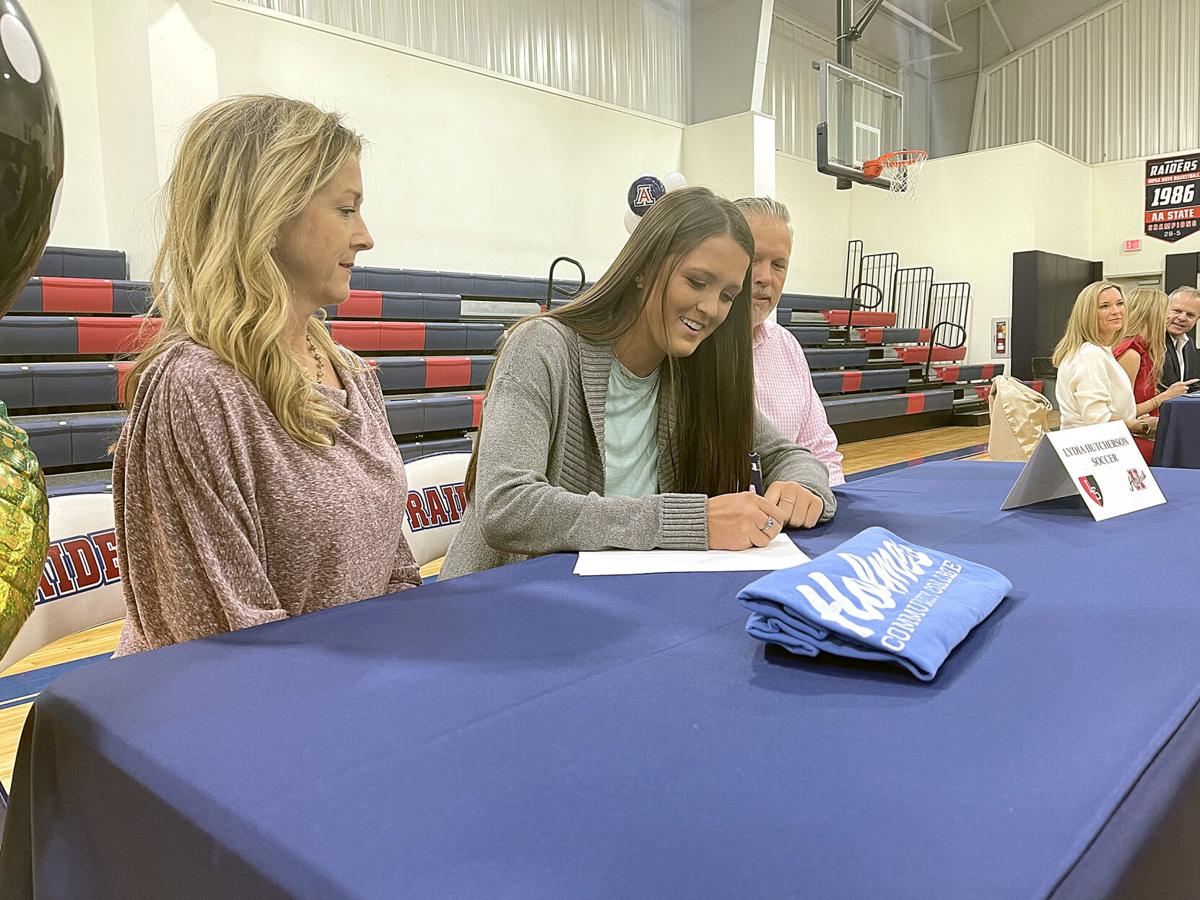 Lamar's Lydia Hutcherson, center, signs with Holmes Community College to continue her soccer career Friday morning in Lamar's gymnasium. She is joined by her parents, Nicole and Gary Hutcherson. 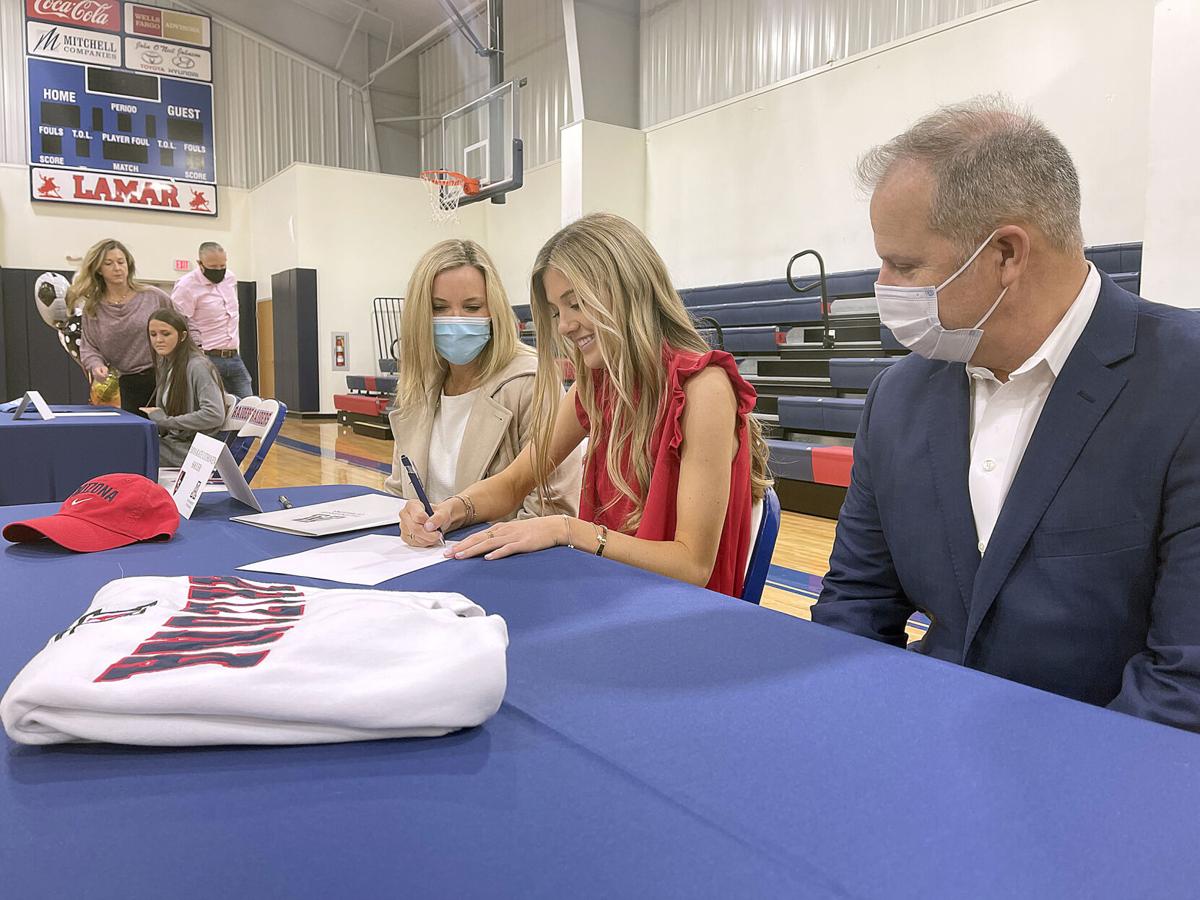 Lamar's Emma Kate Uithoven, center, signs with Arizona to continue her soccer career Friday morning in Lamar's gymnasium. She is joined by her parents, Sheila and Will Uithoven.

Lamar's Lydia Hutcherson, center, signs with Holmes Community College to continue her soccer career Friday morning in Lamar's gymnasium. She is joined by her parents, Nicole and Gary Hutcherson.

Lamar's Emma Kate Uithoven, center, signs with Arizona to continue her soccer career Friday morning in Lamar's gymnasium. She is joined by her parents, Sheila and Will Uithoven.

Lydia Hutcherson and Emma Kate Uithoven are most known to Lamar sports fans for their skills on the soccer field.

They also happen to be two of the Lady Raiders’ hardest workers. That hard work paid off, as Hutcherson signed with Holmes Community College and Uithoven inked with the University of Arizona Friday morning to continue their respective soccer carers.

Lamar girls soccer coach Gretchen Macdonald said the college offers the two received a testament to the many hours Hutcherson and Uithoven put in beyond the team’s scheduled practices and games.

“These two are the kids you would see after practice asking if they could do some extra work or some extra shooting, getting up before practice and doing extra running and just a ton of extra training on their own just to get better in areas they had weaknesses in,” Macdonald said. “They didn’t do that because I told them to, they did it because they wanted to.”

That translated into confidence on the field.

“They did so much extra work on those areas of weakness that they developed confidence in those areas, and when they played you could see that come across,” Macdonald said. “You could see they were more confident in their left foot and more confident heading. All of those things built their confidence and their ability to play and really take over in a lot of situations.”

Hutcherson said she never minded putting in the extra work because she knew she would be rewarded for doing it.

“For a while I had a lot of injuries to deal with, and this year I was able to stay healthy more, so I knew I needed to put in a lot more time and effort to be able to go play for a good college,” Hutcherson said. “It’s all about how much you really want it. I knew I wanted to play college soccer and be the absolute best I could, so really it was more about seeing the improvement in myself. That was the best part about it.”

“I really do love soccer, but sometimes it was a big commitment whenever there were other things going on and I decided to go to the field instead,” Uithoven said. “But in the end, it was worth it.”

Both are eager to begin the next phases of their soccer careers, and Hutcherson said she’s eager to re-join Holmes head coach Wesley Noble after previously playing for him on a travel soccer team.

“They have a good program,” Hutcherson said. “I’ve known Wesley

for a really long time, and the school is amazing. The people who play there, I know a lot of them as well. They’re a really good team, and they’re very family oriented, so it’s just exciting to know I’ll be playing with a good, close team.”

Arizona plays in the highly competitive Pac-12, and Uithoven said she felt comfortable going there even though it’s across the country.

“I’m really excited,” Uithoven said. “I really wanted to play in the Pac-12, and I feel really blessed to get an offer from them. I thought the campus was really cool, and it felt like the South in a way with the way they had it set up. Everyone was really nice there, and I love the coaches. They’re very supportive.”

After tearing her ACL during the season, Uithoven said the Arizona coaching staff stuck with her through the injury, which was another reason she wanted to play for them.

“I actually started jogging (Thursday),” Uithoven said. “Rehab is coming along really well. The coaches were really nice about it and supportive, and they’re hoping I’ll be ready to play whenever I get there.”

Having played soccer nearly her entire life, Hutcherson she said the opportunity to play beyond high school isn’t something she takes for granted.

“It’s exciting,” Hutcherson said. “It’s not that I’m just going off to college or going off anywhere, I’m able to still play the sport I’ve been playing since I was 3 years old, and it’s exciting to know my career isn’t going to stop in high school and I get to continue playing for a couple more years.”

While she’ll miss both of them, Macdonald said Hutcherson and Uithoven’s college opportunities couldn’t have happened to better players — and people.

“They’re both just tremendous people: kind, good kids who work super hard and have great attitudes,” Macdonald said. “As seniors this year, they were leaders throughout the season, especially with the younger players and taking them under their wings and helping teach them the expectations we had. Other than being great soccer players, they’re wonderful people.”