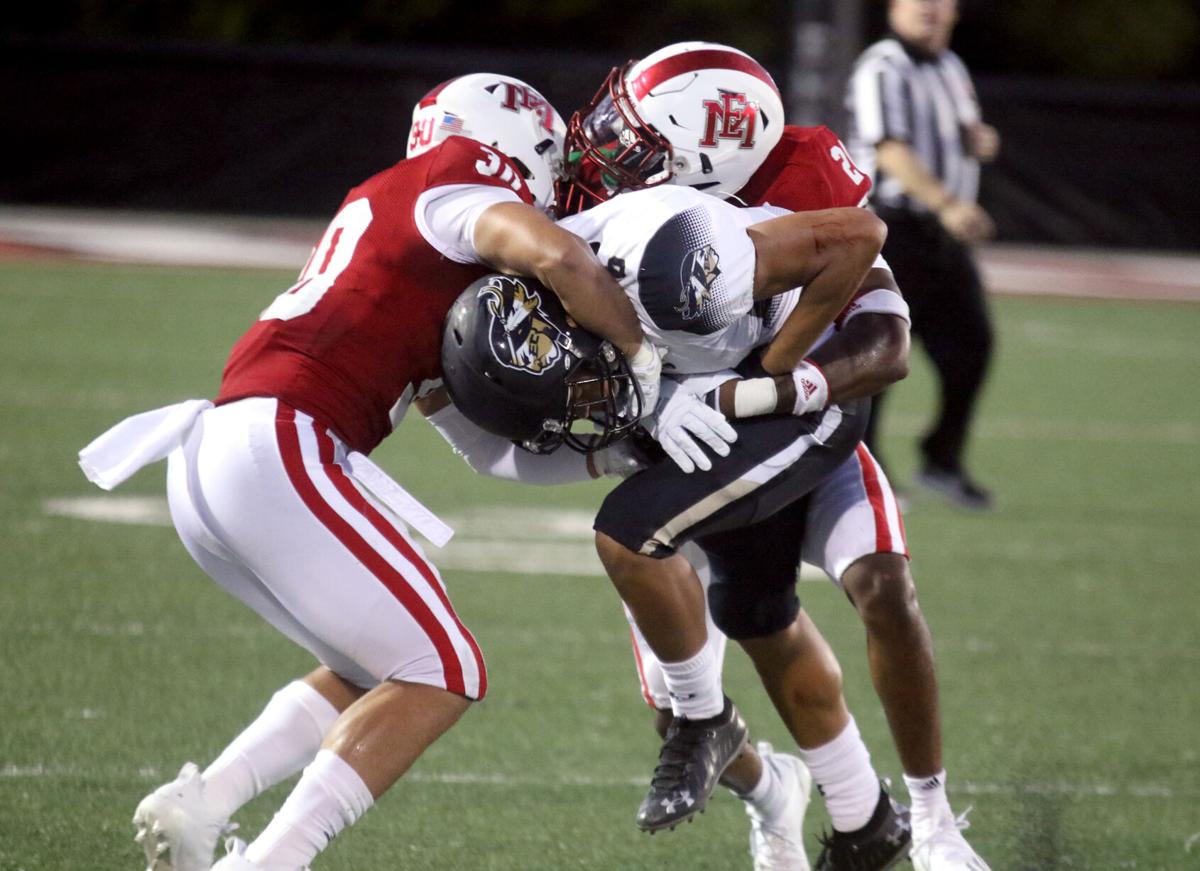 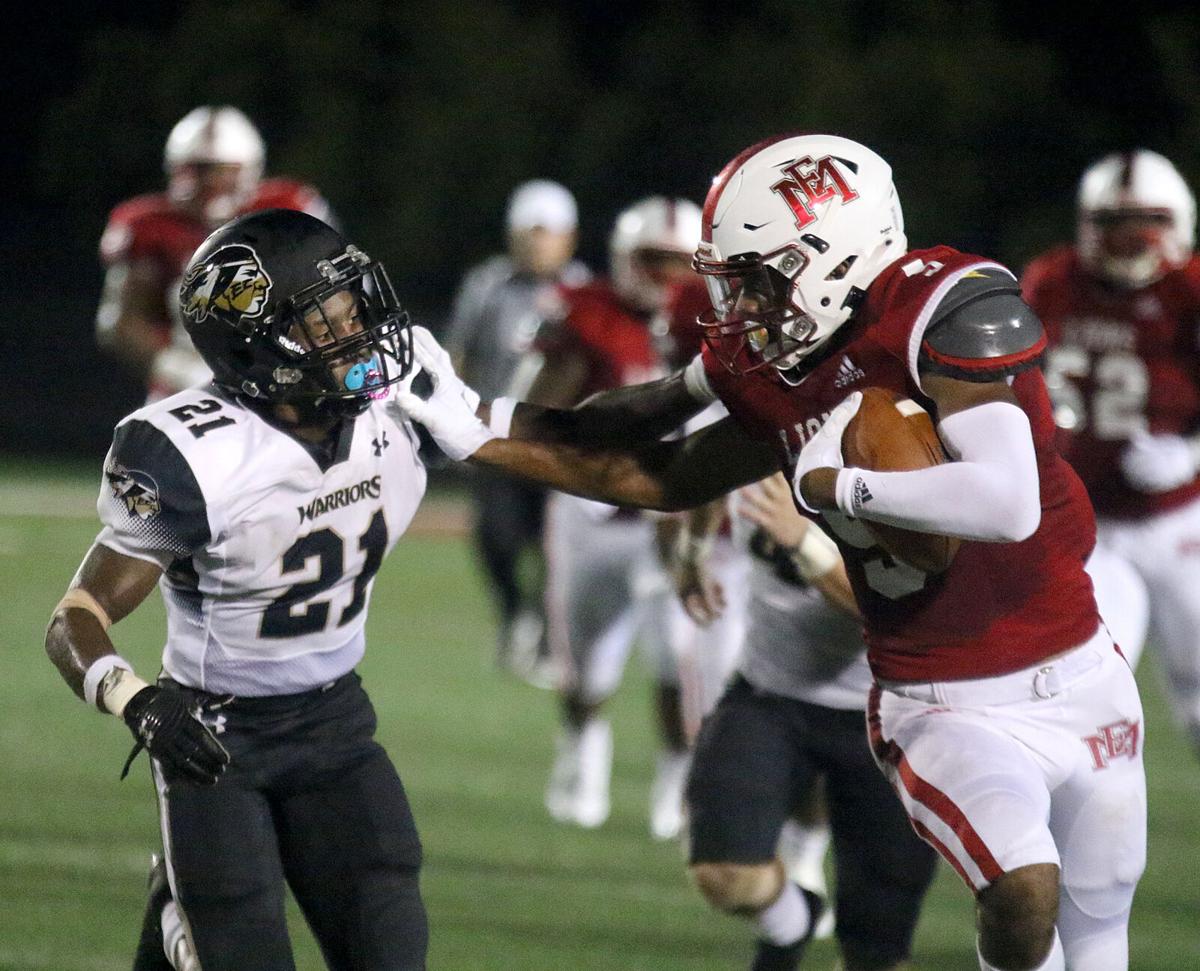 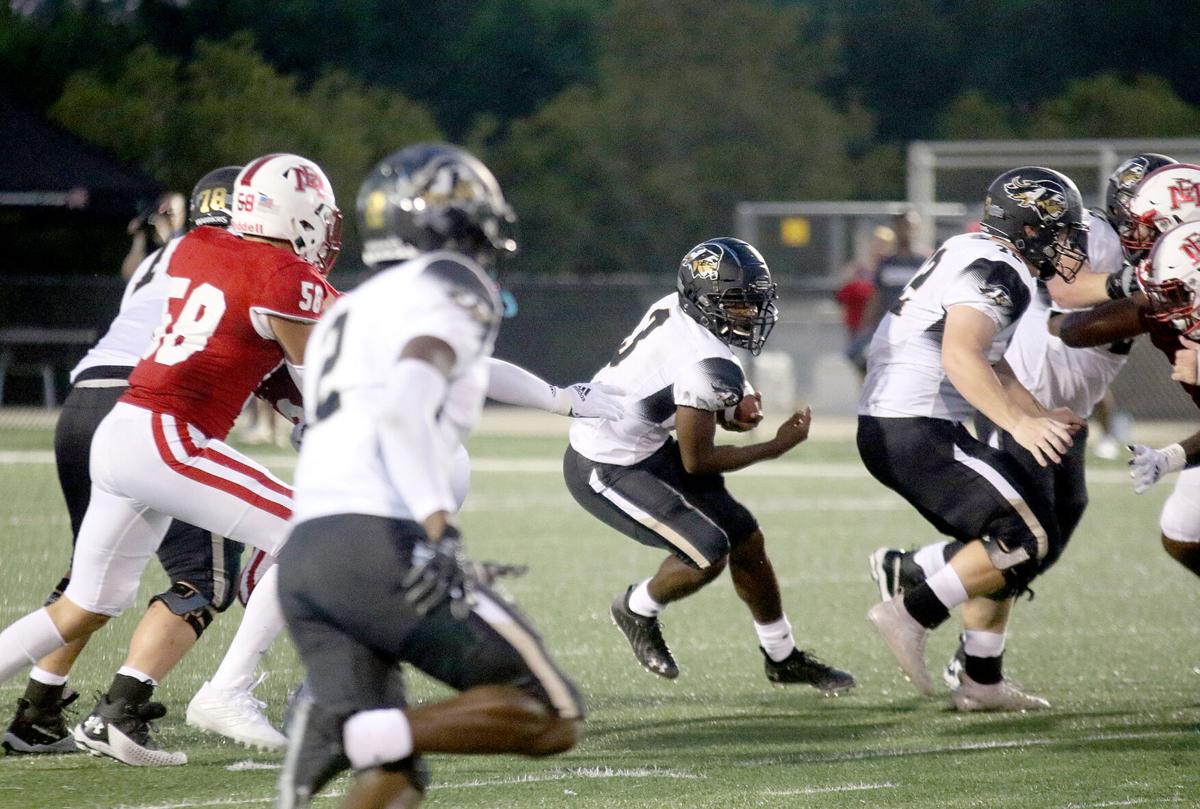 ECCC running back Corey Goldwire cuts back through the hole during the first quarter of the Warriors' game at EMCC Thursday, Sept. 2, 2021. 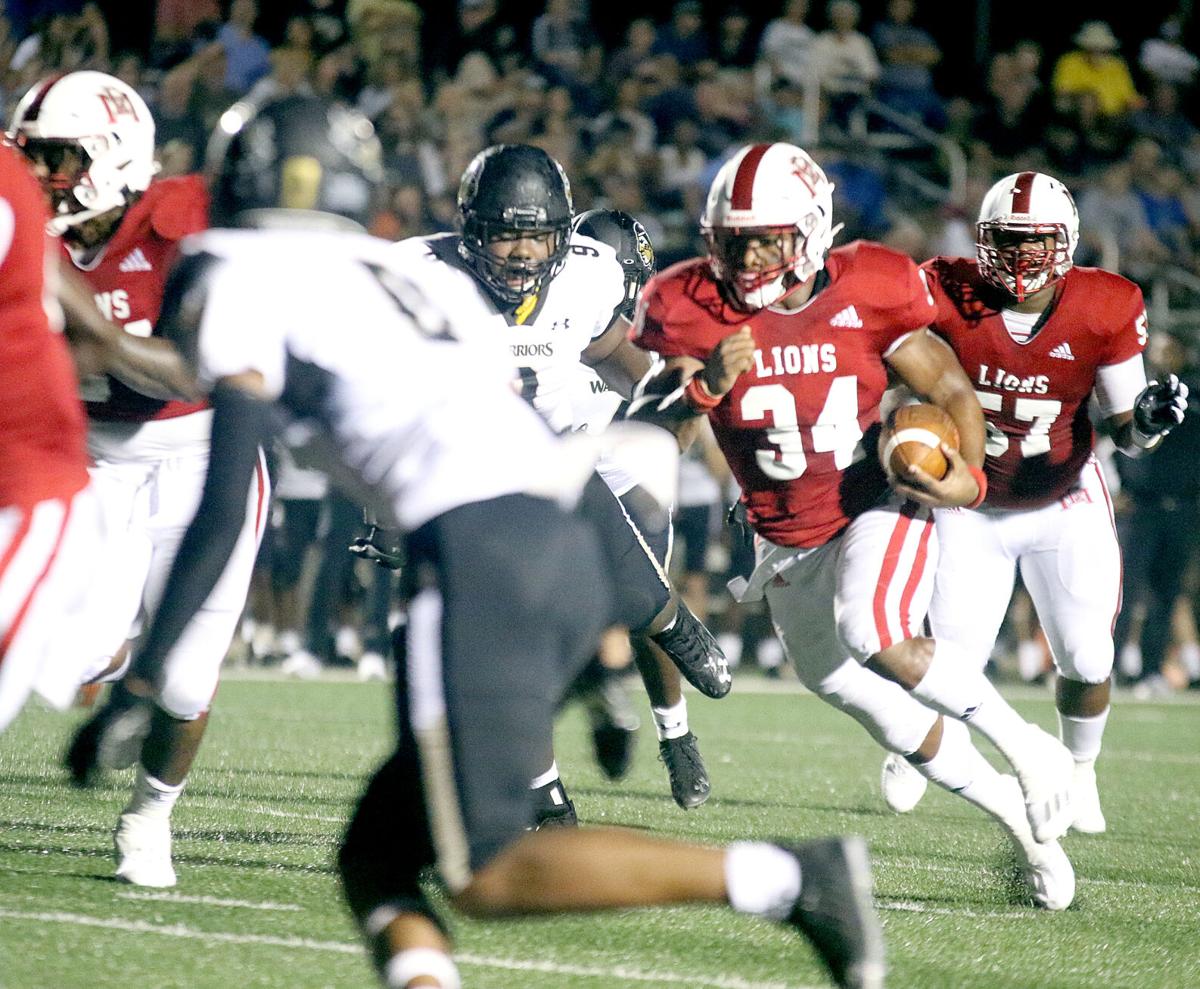 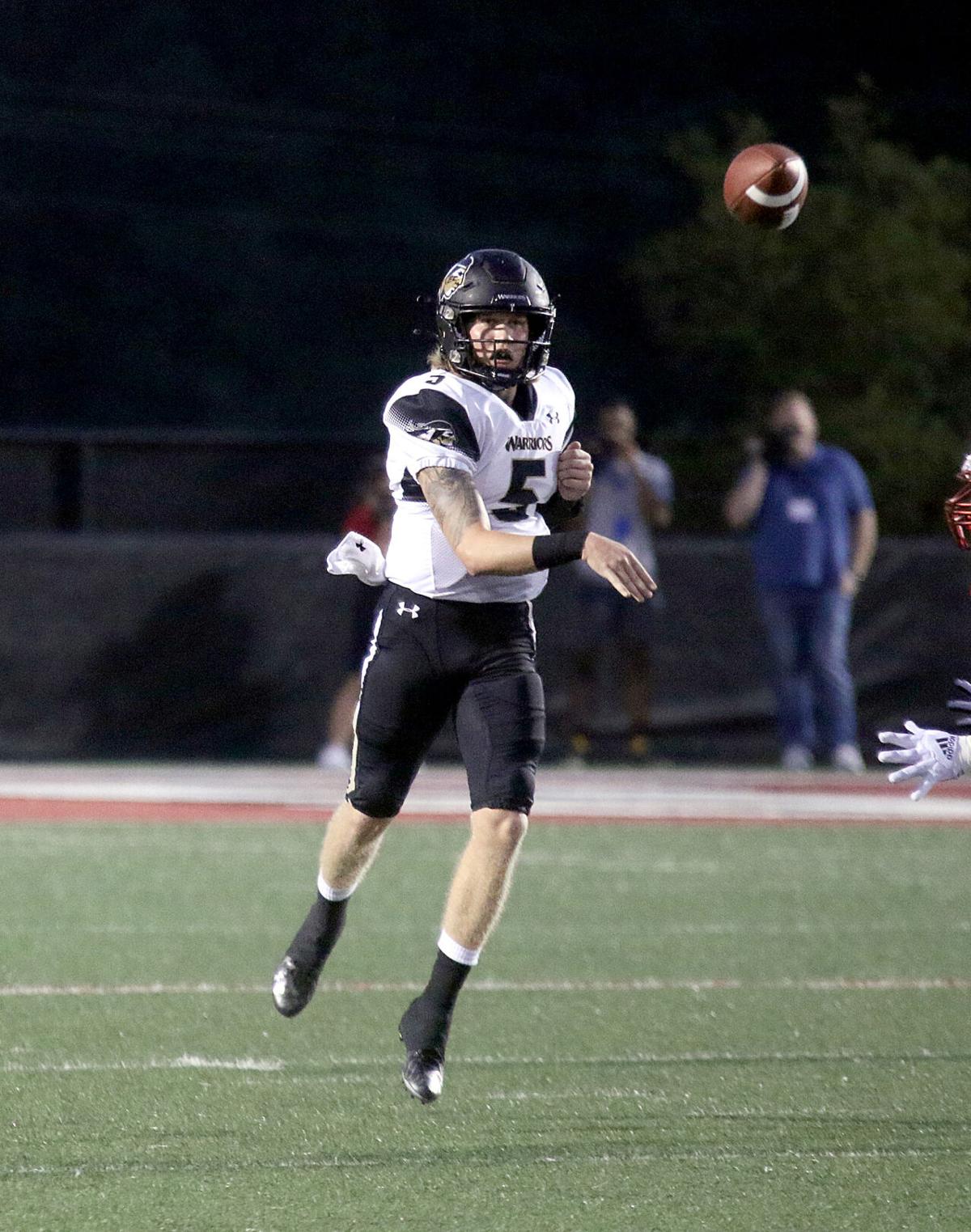 ECCC quarterback Caleb Parten tosses a quick pass during the first quarter of the Warriors' game at EMCC Thursday, Sept. 2, 2021.

ECCC running back Corey Goldwire cuts back through the hole during the first quarter of the Warriors' game at EMCC Thursday, Sept. 2, 2021.

ECCC quarterback Caleb Parten tosses a quick pass during the first quarter of the Warriors' game at EMCC Thursday, Sept. 2, 2021.

With their most recent football competition coming on Nov. 2, 2019, during the conference playoffs prior to opting out of last season due to health concerns caused by the coronavirus pandemic, the 22-month hiatus didn’t seem to affect the Lions’ defensive unit. Under first-year defensive coordinator Chris Boone, EMCC limited the visiting Warriors to just four first downs and only 95 yards of total offense during the contest.

Both defenses controlled the game’s tempo during most of the opening quarter, as the first five combined possessions resulted in punts after a total of just 19 net yards were gained collectively.

With freshman quarterback Damon Stewart making his collegiate debut under center, the Lions got on the board first when the former Oak Grove High School standout capped a 5-play, 42-yard drive by scoring on a 16-yard keeper at the 3:49 mark of the opening quarter. The point-after-touchdown attempt hit the right upright to keep the score at 6-0.

Defense set up the Lions’ second score of the game at the beginning of the second quarter. Deep in ECCC territory, Joshua Short caused a fumble of a completed third-down pass that was recovered by Kendarius Smith at the 30-yard line. Following a fourth-and-4 pass completion and an ECCC facemask penalty on back-to-back plays to set up a first-and-goal opportunity at the 5-yard line, sophomore running back Zias Perryman punched it in from 2 yards out. Peyton Rodgers’ successful PAT put the Lions on top, 13-0, with 10:41 remaining in the first half.

After forcing another three-and-out on ECCC’s subsequent possession, EMCC extended its lead to 16-0 on Rodgers’ 36-yard field goal at the 7:06 mark to cap the first-half scoring.

Similar to the game’s opening quarter of play, the first six combined possessions – three by each team – of the second half all resulted in punts. Late in the third quarter, EMCC sophomore signal-caller Jamari Jones provided some offensive spark coming off the bench. He first engineered a 7-play, 48-yard drive that was capped by Rodgers’ 34-yard field goal to make the score, 19-0, with just under two minutes left in the quarter.

The Lions then took advantage of Trey Laing’s interception of Caleb Parten’s pass in ECCC territory during the final minute of the quarter. Jones, a Northwest Rankin product, promptly completed consecutive passes to four different receivers, ultimately hitting sophomore Zach Patterson on a 13-yard scoring strike to increase the margin to 25-0 with 14:24 remaining in the contest.

EMCC’s bid for a possible shutout victory was denied after the Warriors took advantage of a Lions turnover. After gaining possession on the EMCC 41-yard line, ECCC used a 15-yard keeper by quarterback Gabriel Larry and his subsequent 26-yard touchdown pass to Keyser Booth to get the visitors on the board.

While running out the clock on the ground during their final possession of the game, the Lions went 46 yards on eight rushing plays for their fourth touchdown of the contest. Starkville’s KJ Lawrence carried the ball six times on the drive and finalized the game’s scoring on a 3-yard touchdown run with just 26 ticks left on the game clock.

Offensively for the winners, Stewart and Jones combined for 22-of-46 passing for 249 yards. Stewart was 15-of-33 through the air for 176 yards but was sacked five times, while Jones completed 7-of-13 passes for 73 yards and a touchdown. Eight different EMCC receivers caught at least one pass on the night, highlighted by Kevin Barnett’s six catches for 87 yards.

On the ground, the Lions totaled 149 net rushing yards and three scores. Lawrence led the way with 47 yards on eight carries, followed by Arkansas transfer Montae Spivey with 36 rushing yards on seven attempts.

ECCC’s offense was led by Larry Wilson (Hazlehurst) who posted 47 yards on 15 carries from the running back position. Larry and Caleb Parten (Flowood) split time at quarterback throughout the night with both players completing three passes.

The Warrior defense was led by Ke’Sean Johnson (Quitman) and Josten James (Wiggins) who both posted nine tackles. Johnson also led the team in sacks with two. Other notable performances came from Anthony Thomas (String), Tori Mulkey (Ozark, Ala.), and Ryan Whitfield (Noxapater). Thomas wrapped up 2.5 tackles for loss and a sack, while Whitfield posted 1.5 sacks. Mulkey joined James with two pass breakups each.

The 1-0 EMCC Lions will hit the road for their next two contests, beginning with Thursday’s (Sept. 9) game against the Bears of Southwest Mississippi Community College, which is scheduled for 7 p.m. in Summit. ECCC (0-1) has another cross-divisional contest next week as the team travels to Moorhead to take on the Mississippi Delta Trojans at 7 p.m. Thursday, Sept. 9.