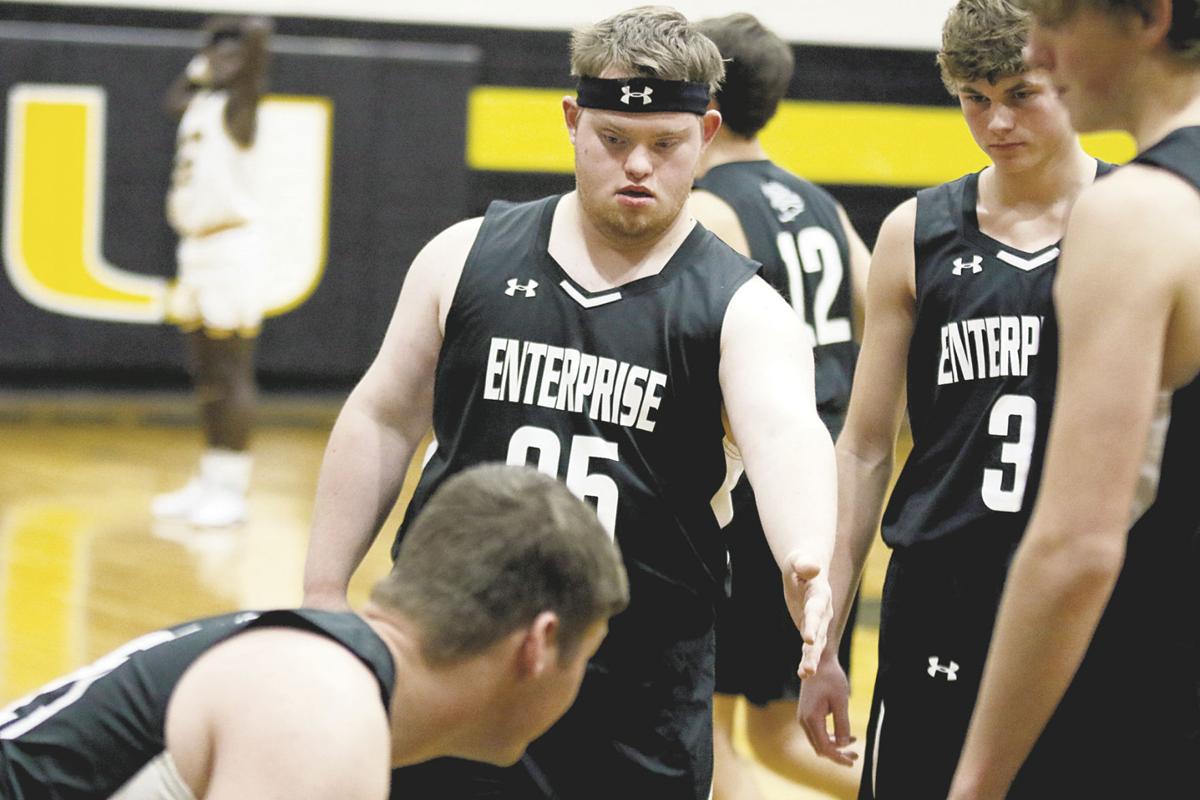 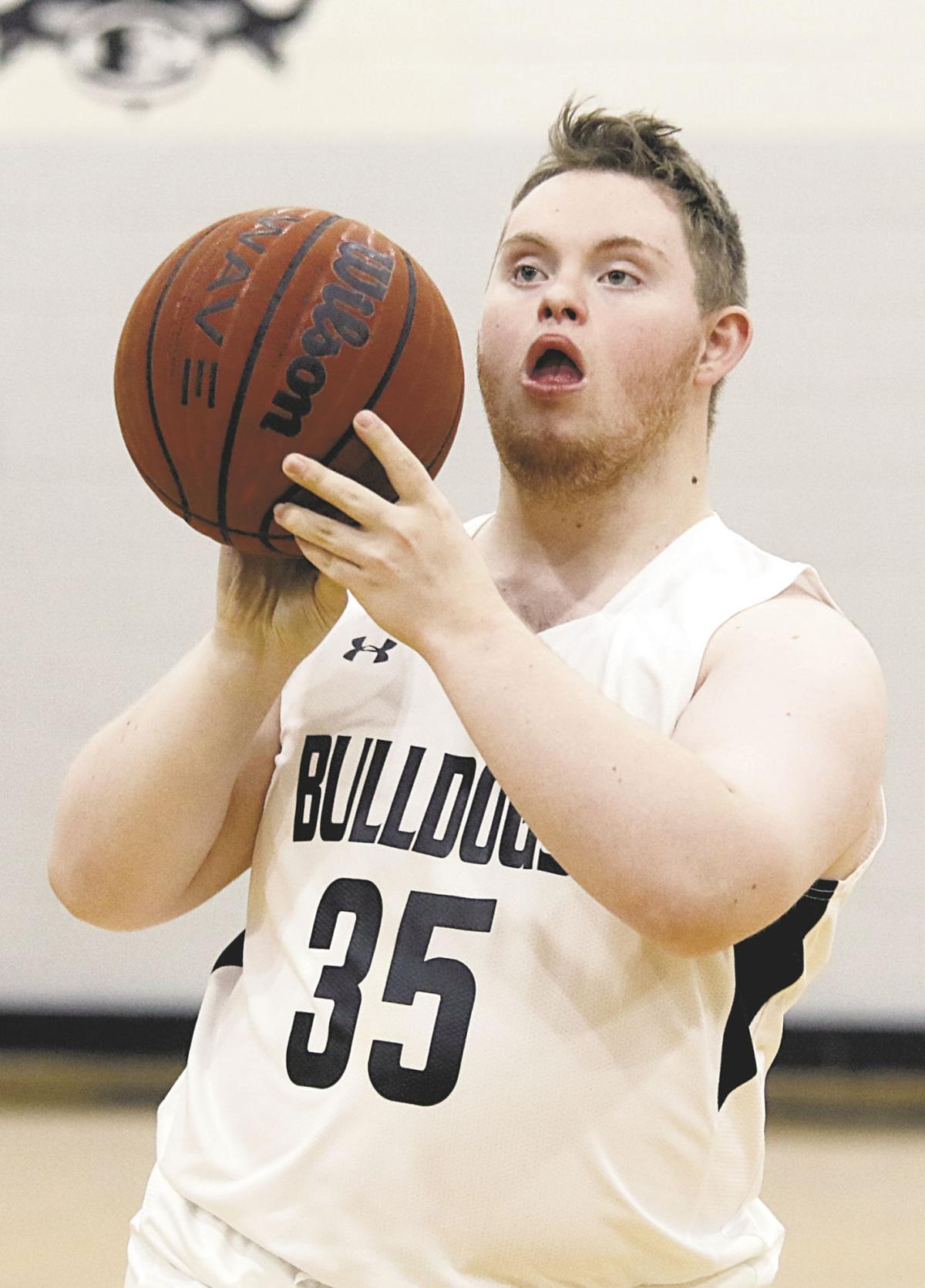 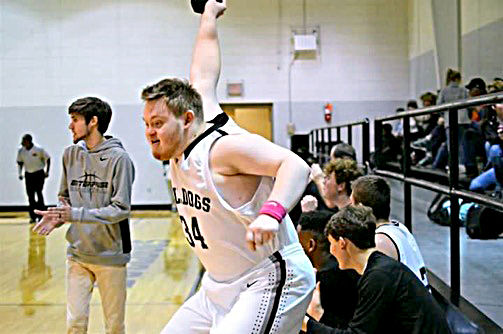 Grant Goodman is pictured jumping in excitement during the 2017-18 season after the Bulldogs secured a playoff spot.

Grant Goodman followed his teammates as they exited the locker room.

Instead of joining them for their pregame warmup, however, the Enterprise senior headed for the team bench and watched his fellow basketball players take layups and jump shots until they joined him for the announcing of the starting lineups several minutes later, ahead of a home game against Kemper Academy last Friday.

As the Bulldogs’ starting five sat on the bench, and other members of the squad lined up next to each other on either side of them, creating a lane stretching out from the sideline, Goodman stood at the top of that lane, greeting players as their names were called by forming an X in the air with his wrists crossing in front of each other. His teammates mirrored the gesture as they approached him before peeling off to bump fists with the game referee and Rams head coach Brad Cheatham.

There was a good chance Goodman was getting onto the court that night, but he had to wait. While he gets less playtime than anybody else, he’s more than the team manager, and provides an energy for Enterprise that’s more valuable than points on the scoreboard.

Lynese Goodman didn’t know her son had Down syndrome until he was diagnosed with the disorder at 3 1/2 months old.

She said she was unaware because, as a newborn, Grant appeared high-functioning, which he was and has always been. She said he has continued to remain healthy and has never needed surgery.

“The only thing wrong with him is he gets a cold just like everybody else,” she said.

Sports have always been a part of Grant Goodman’s life, made evident by a Bear Bryant ring he wears. He first started playing baseball in the Little League Challenger Division, a program available for those with physical and intellectual disabilities, and began bowling.

He also learned karate, but has since set that aside because it interferes with basketball.

Goodman joined Enterprise basketball as an eighth-grader, initially serving as the team manager. Once a few players started teaching him how to shoot free throws and jumpshots, they requested he become an official member of the roster for his sophomore season.

He still helped with managerial tasks, but now he dresses for games in the Bulldogs’ black and white uniforms. It wasn’t long before Enterprise head coach Justin Sollie wanted to get Goodman on the court.

It’ll only happen late in a contest if the Bulldogs are blowing out their opposition, or getting blown out. Usually, Sollie will either put Goodman into the game to be intentionally fouled and sent to the line, or another player will be fouled, and Goodman will take his place for the ensuing free throw attempts.

Sollie said the accommodation of referees and opposing coaches, in their willingness to let Goodman score, has been heartwarming.

“It’s progressed over time from just getting water and helping us during practice to a full-fledged member of the team,” he said. “We took the initiative, and as long as other teams are cool with it, we want to give him some shots.”

Goodman sat cross-legged at the end of the bench, dangling his right foot while observing his squad grind through an unexpectedly challenging matchup with Kemper Academy, springing to his feet in jubilation at one point after junior Eli Mabry hit a 3-pointer.

Mabry was eventually subbed out in the second quarter and took a break beside Goodman. Despite an Enterprise lead that never got beyond 15 points, and in the midst of a game-high 26-point performance from Mabry, the two shared light-hearted moments of laughter, dancing and embraces.

He’s always there to keep players in a good mood.

Before the second half started, Goodman warmed up his free throws, preparing for what could be a few seconds of playtime.

“It’s the highlight of the night,” senior Jackson Morrow said on seeing Goodman shoot free throws in a game. “You don’t get to see it that often, and especially when he makes it, the whole crowd goes wild for him. It’s just a happy sight to see.”

PASSION FOR THE TEAM AND THE SPORT

Sollie keeps a photo on his phone from a crucial game during his first year as head coach in the 2017-18 season.

The photo was taken after a Bulldogs victory that clinched a playoff spot, and shows an emphatic Goodman jumping in the air, swinging a towel in celebration while Sollie stands in the background.

Goodman’s love of the sport and for his teammates comes through not only in his cheering when they hit 3-pointers, draw offensive fouls and win games, but when they fall short of accomplishing those tasks as well, his mother said.

“He’ll get on his teammates about playing well and all that,” she said. “He’ll holler at them, and he’ll get up and take his towel and wave it at them. He really supports them, and he gets excited about the games.”

In the final two quarters, Kemper Academy cut its deficit to as little as six points before the Bulldogs pulled away. But before the final buzzer sounded, leading 57-46, an Enterprise player was fouled. Sollie whipped around to his bench and called for Goodman to enter the game with 1.9 seconds left.

He missed his first few free throw attempts, but was allowed to shoot a couple more. His first made bucket sent the Enterprise squad, and spectators alike, into a frenzy as the gymnasium hit its highest volume of the night. Goodman ran to the sideline to embrace Mabry as he was swarmed by his teammates.

For Sollie, moments like these put everything in perspective.

“It’s either the icing on the cake of a big win, or, ‘This loss sucks, but it’s a good moment where we can all cheer for him and bring it back to Earth,” he said. “If we’re down big, it’s what centers me for a moment. We might be getting out butts kicked, but hey, everybody’s about to see him shoot. In the midst of getting our teeth kicked in, it’s about the kids.”

Lynese Goodman said she sees how much the team loves her son and how much he loves them. She knows it’ll be hard to say goodbye.

“It gives him so much joy,” she said. “That’s one of the things that he just really looks forward to. I don’t know what we’re going to do when he graduates.”