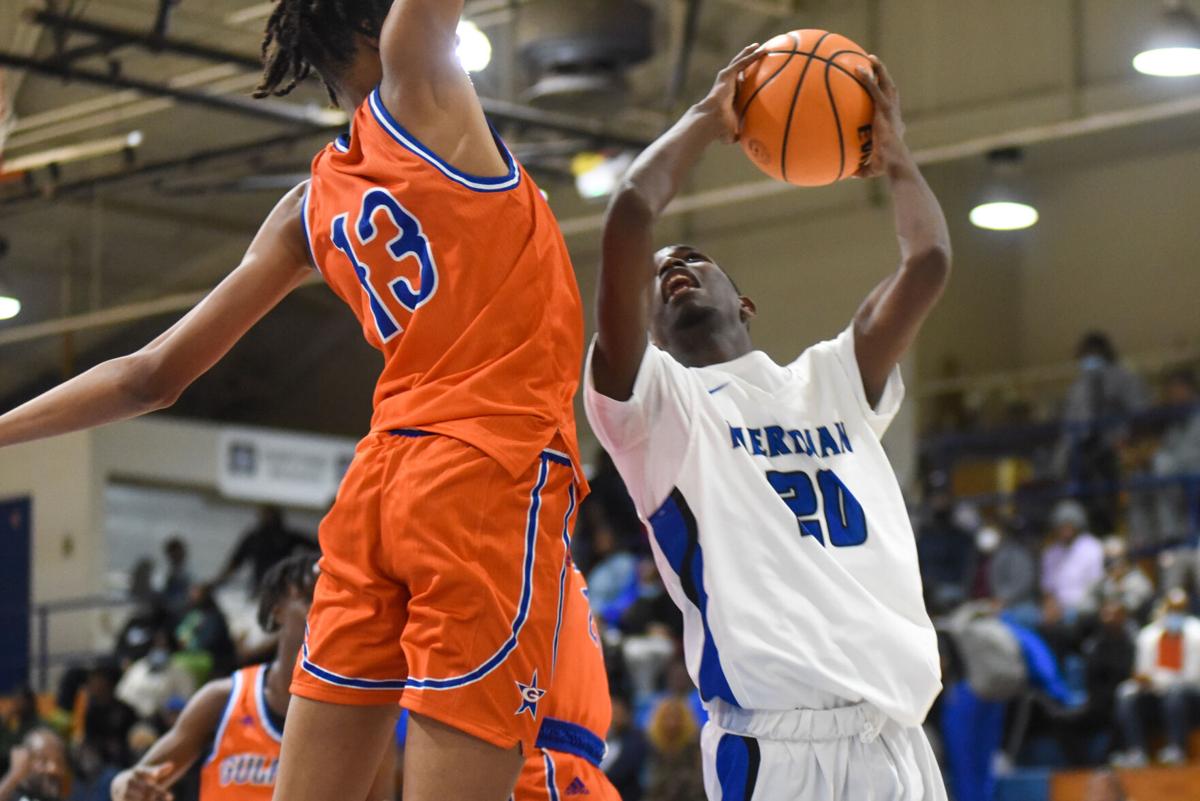 Meridian's Jordan Jones goes up for a shot during the Wildcats' home game against Gulfport Thursday, Nov. 11, 2021. 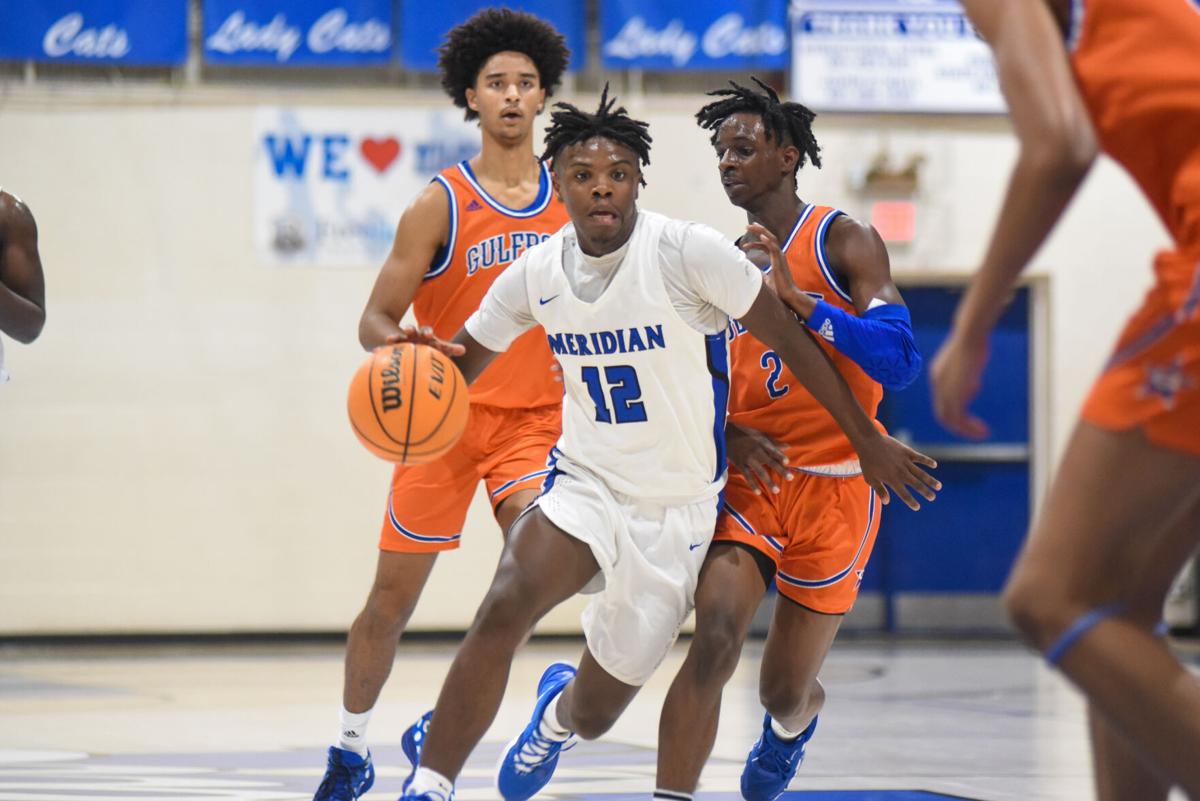 Meridian's Demarcus Powe takes the ball down the court during the Wildcats' home game against Gulfport Thursday, Nov. 11, 2021. 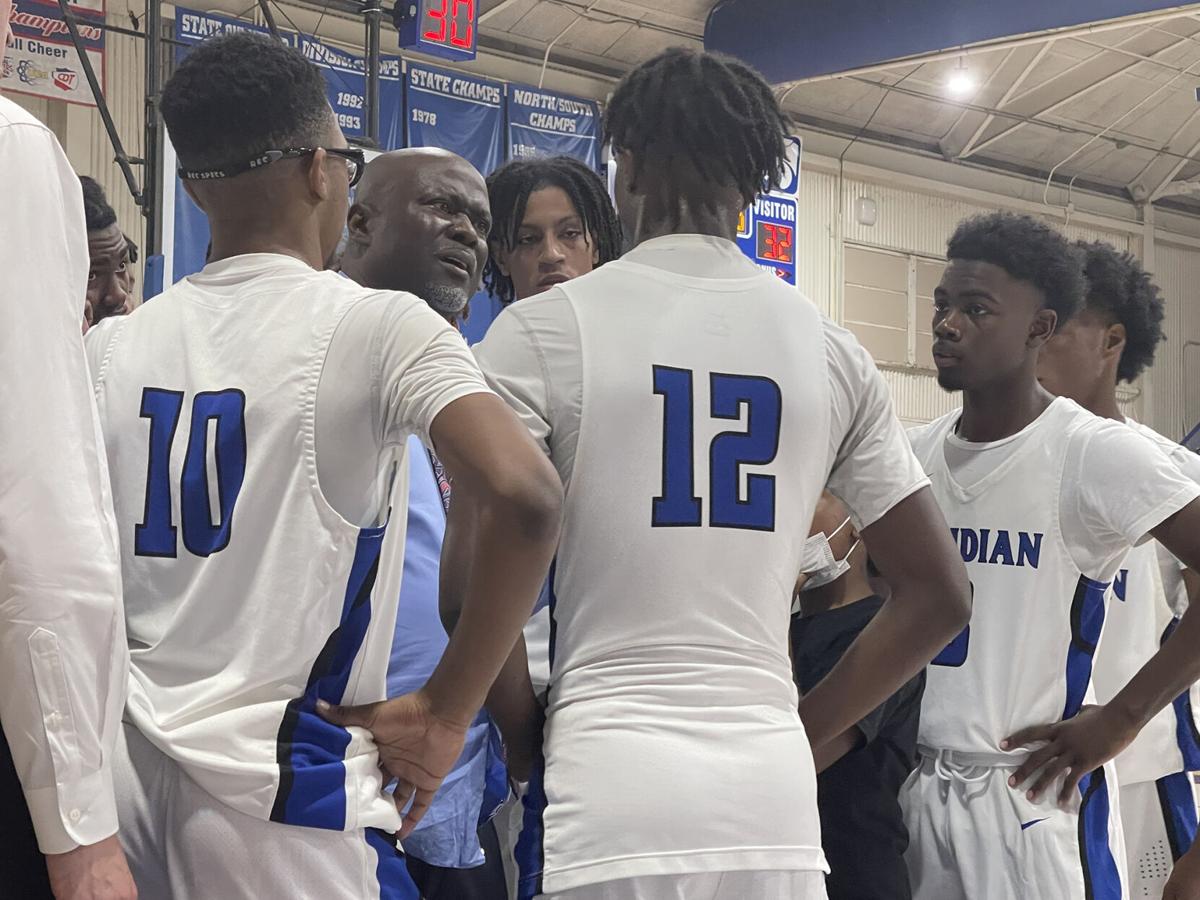 Meridian head coach Ron Norman coaches his players during a time out in the Wildcats' home game against Gulfport Thursday, Nov. 11, 2021. 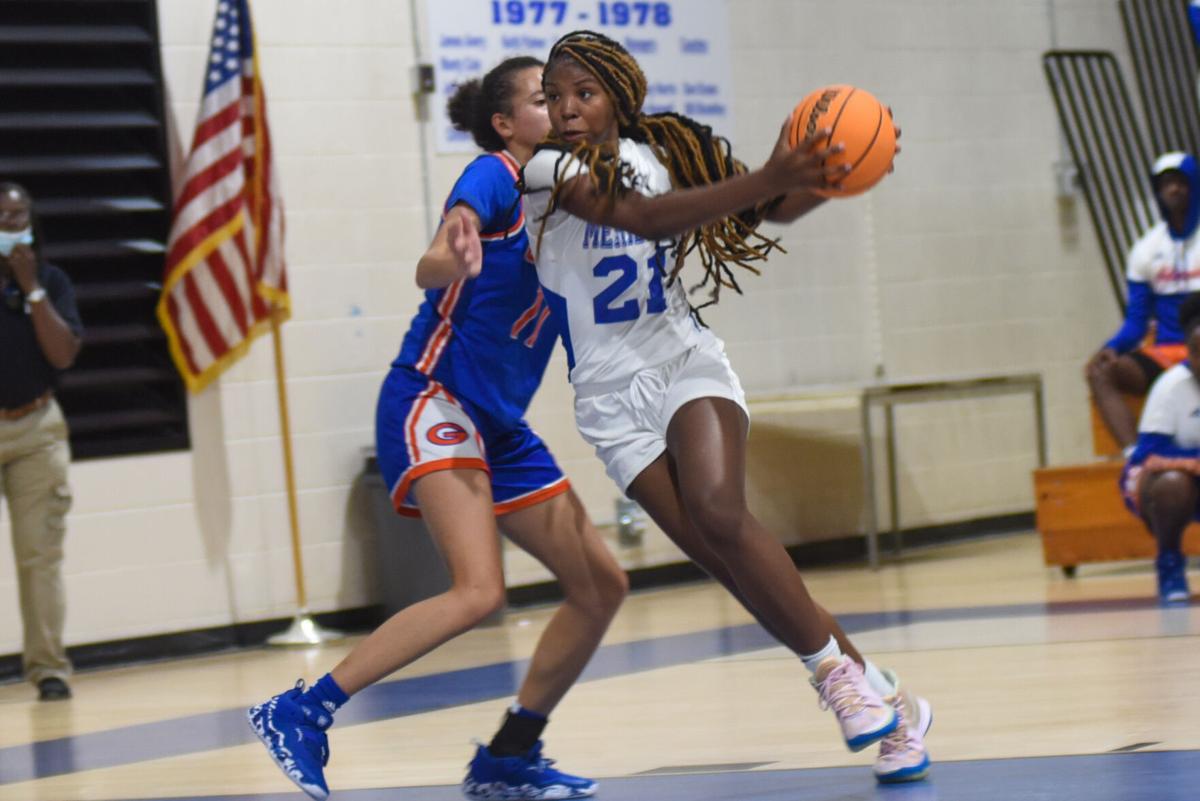 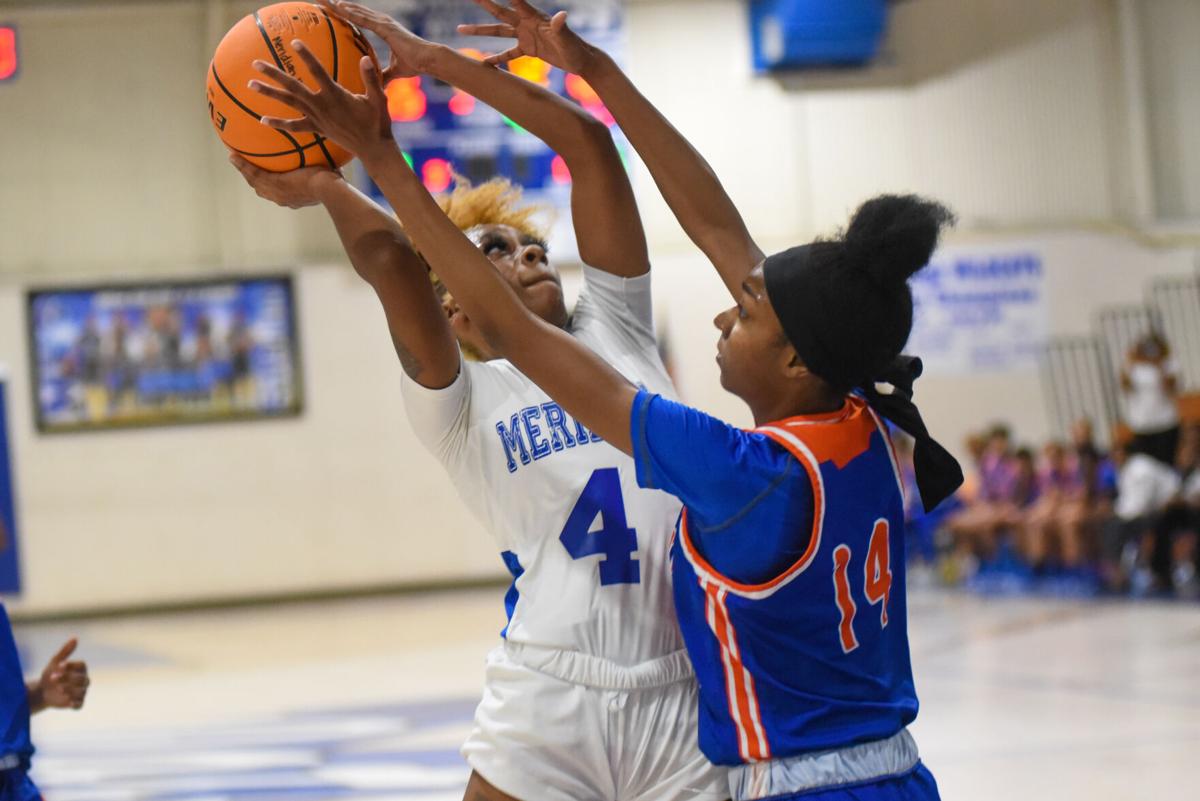 Meridian's Charity Hinton goes up for a shot during the Lady Wildcats' home game against Gulfport Thursday, Nov. 11, 2021.

Meridian's Jordan Jones goes up for a shot during the Wildcats' home game against Gulfport Thursday, Nov. 11, 2021.

Meridian's Demarcus Powe takes the ball down the court during the Wildcats' home game against Gulfport Thursday, Nov. 11, 2021.

Meridian head coach Ron Norman coaches his players during a time out in the Wildcats' home game against Gulfport Thursday, Nov. 11, 2021.

A good defensive stand by Meridian early in the third quarter forced Gulfport to pass it right in front of its bench.

The Admirals player mishandled the ball, resulting in a turnover for the Wildcats. A few seconds before Meridian inbounded the ball, Wildcats head coach Ron Norman exclaimed to his players on the court, asking them if he was the only one excited about that play.

“I want my kids to play loose, and everything we do is predicated on defense,” Norman said. “You’ve been with me five years, and I talk about defense because defense travels. What we do on the defensive end travels, so I want them to be excited not just about the 3s we made in the first half, but that defensive play as well.”

It was defense that carried the Wildcats to a 39-33 home win Thursday evening against Gulfport, and it carried them through a pair of scoring droughts in the third and fourth quarters. Meridian held the Admirals scoreless in the final six minutes of regulation, allowing the Wildcats to do just enough on the offensive end as time expired.

“We turned them over about four times right there down the stretch, and they didn’t get a shot attempt,” Norman said. “We had every reason to lose, but we made enough plays to win.”

Meridian took an 11-7 lead after one quarter of play, and the Wildcats started off hot in the second quarter when Brandarious Boler, Devin Portis and Tamarion Jones each hit a 3-pointer in the first two minutes of the frame. Gulfport closed the second on a 6-3 run, but Meridian led 23-13 at the break.

The Admirals came out firing in the third quarter, outscoring Meridian 15-3 in the first six and a half minutes of the second half. The Wildcats bounced back, however, with a 6-0 run in the final 1:21 of the third thanks in part to a 3 by Javion Yarbrough.

“Teams are going to go on runs like that, so we just have to learn how to not get down on ourselves and just stay up,” senior Demarcus Powe said.

Gulfport scored all five of its fourth-quarter points in the first two minutes of the frame to jump back ahead 33-32 with 6:02 left to play, but Meridian ended the game by outscoring the Admirals 7-0. Jaquavion Horner hit a pair of field goals late in the game — one of them off a steal — and Powe returned to the court after drawing his fourth foul earlier in the fourth quarter to sink two free throws with 37 seconds left and help his team buckle down defensively.

“You just have to make enough plays to win,” Powe said. “That’s what Coach always says, so it’s always in the back of my mind.”

Powe led the Wildcats with 14 points, and Portis finished with seven points, while Horner had six points for Meridian. The Admirals’ Zarius Gill had 11 points, and Kamari Mitchel scored 10 points for Gulfport.

“It was a typical Gulfport-Meridian game. We remember the last time they came in here, they beat the brakes off of us,” said Norman, referring to Gulfport’s 68-54 win against Meridian in the second round of the 2020 MHSAA Class 6A playoffs. “I thought we had a really good first half, and in the third quarter we couldn’t score, but that’s a credit to them being 6-foot-9, 6-foot-7, 6-foot-8, but our kids made enough plays. I’ll say it every day, I don’t care about stats, make enough plays to win. (Powe) made enough plays down the stretch to win, and that’s what it’s all about. That’s what you want from your senior.”

If there’s one thing Powe took away from the game, it was Norman’s happiness about he and his teammates’ defensive intensity. It’s not a surprise, though, given how much Norman stresses defense in practice.

“Every day,” Powe said. “Anytime we don’t have intensity on defense, we’re running.”

Meridian improved to 4-0 on the season.

The Lady Wildcats fended off a fourth-quarter run by Lady Admirals to complete the sweep of Gulfport Thursday.

Meridian took a 36-27 lead into the half and led 53-37 at the end of the third quarter, but Gulfport outscored the Lady Wildcats 15-8 in the final period. Meridian secured the win by hitting a few free throws in the game’s waning minutes.

“There were a lot of growing pains tonight,” Meridian girls basketball coach Deneshia Faulkner said. “I think we learned a lot about ourselves. We have a lot to learn defensively, and I don’t think we made the right decisions offensively early in the game, but hey, it’s basketball, and it’s about growing. I think it’s a good win for us, but like I said there are a lot of lessons to be learned from this game.”