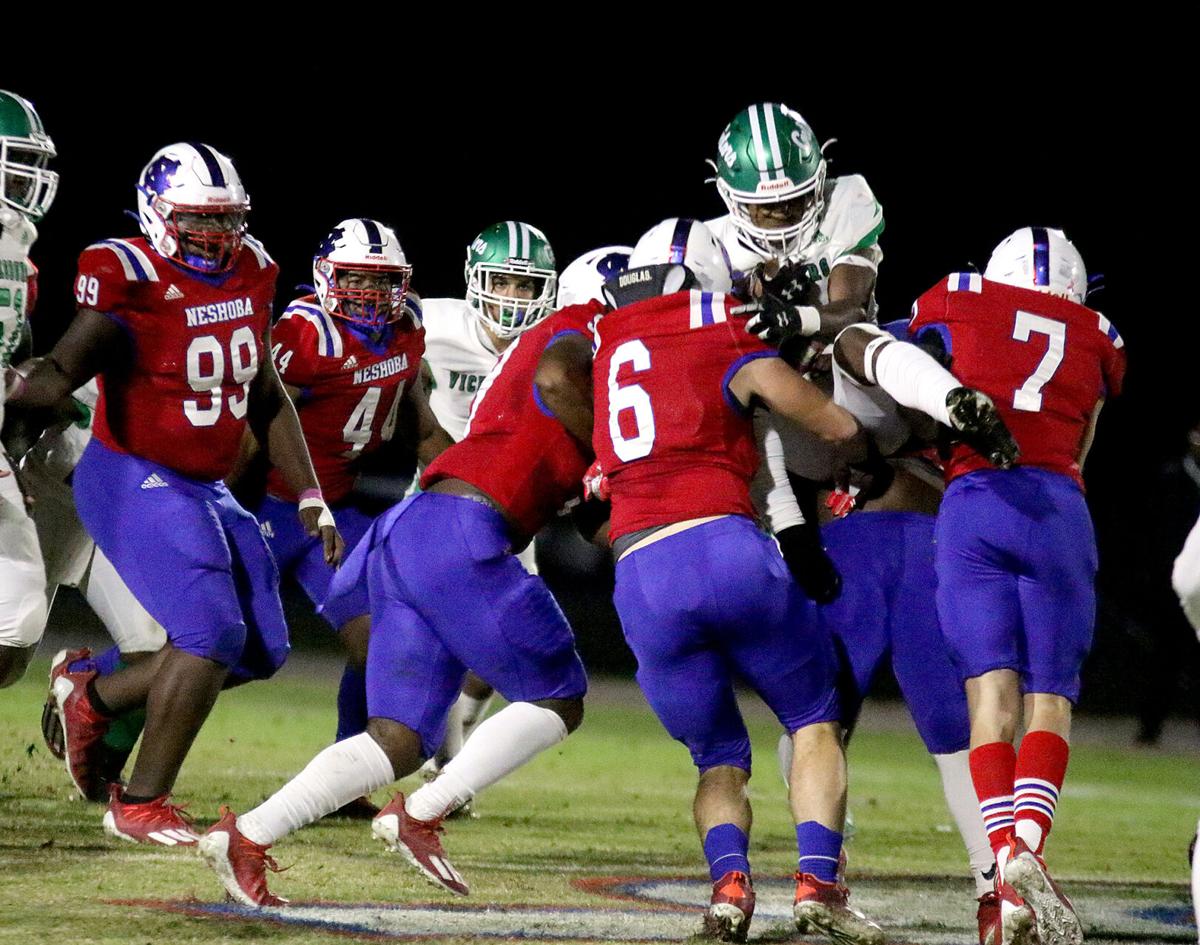 A host of Neshoba central defenders swarm the Vicksburg ball carrier during their game Friday, Oct. 22, 2021, at Neshoba Central. 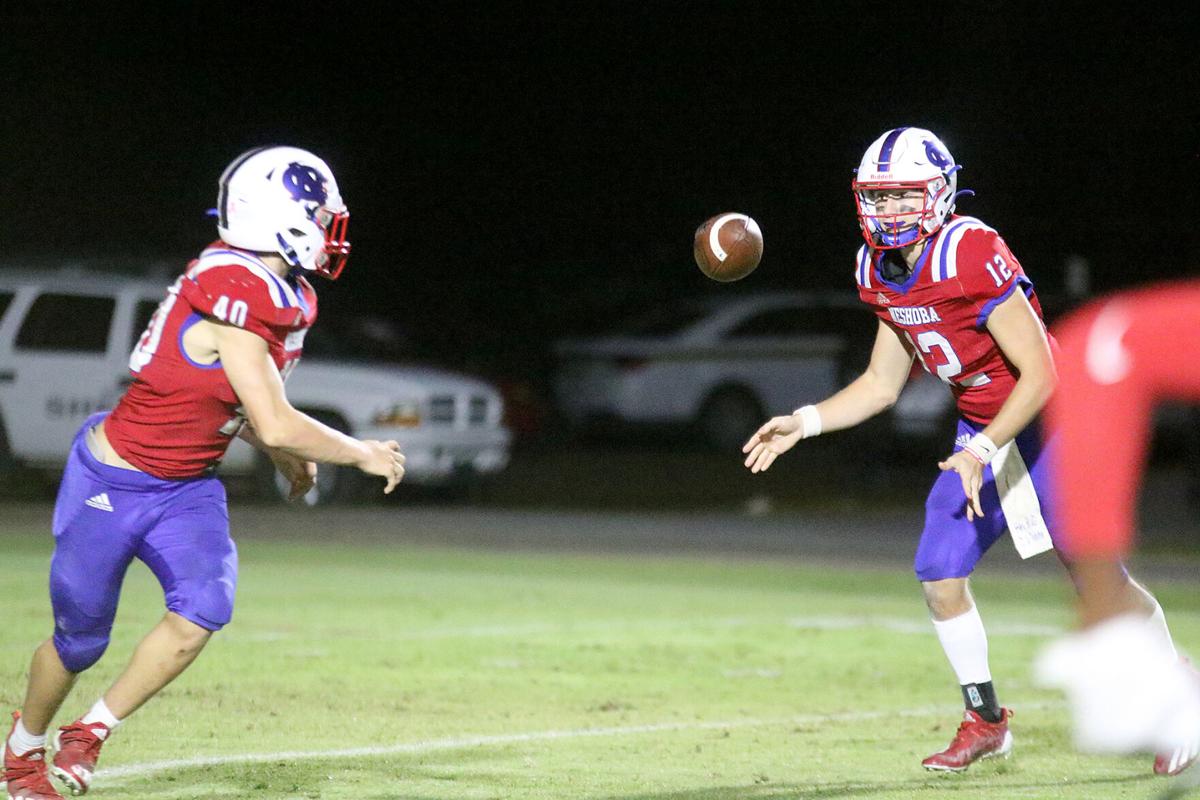 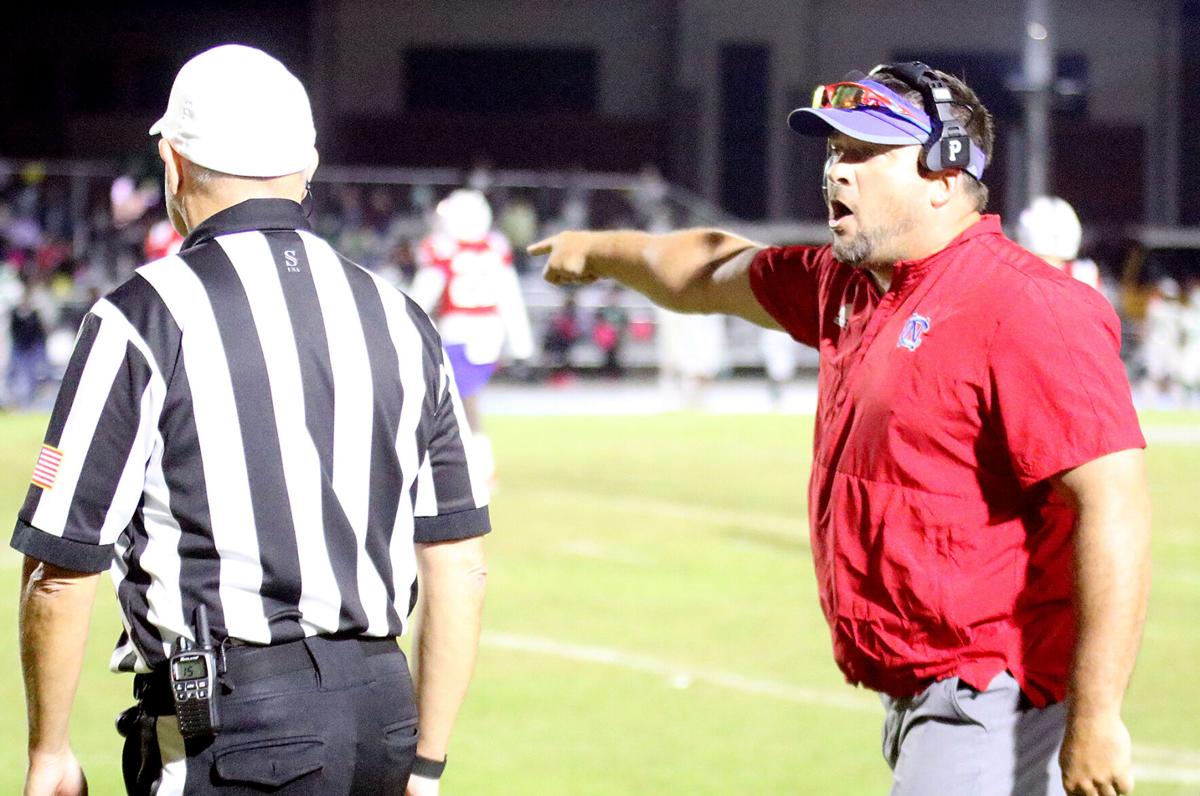 A host of Neshoba central defenders swarm the Vicksburg ball carrier during their game Friday, Oct. 22, 2021, at Neshoba Central.

PHILADELPHIA — The Neshoba Central defense wasn’t going to be denied.

With the Rockets struggling to move the ball offensively, Neshoba Central leaned on its front seven as it battled Vicksburg for MHSAA Region 2-5A supremacy. And the defense limited the damage to just a single touchdown as the Rockets defeated the Gators 10-6 to capture the divisional title.

“Vicksburg is a great team,” Neshoba Central head coach Patrick Schoolar said. “They’re physical, fast and everything they were advertised to be. The defense played extremely well tonight, and the offense was put in some bad binds, but they held their own for us. Offensively, we had spurts that were really good and spurts where we couldn’t do anything at all. That’s football, though, and credit to (Vicksburg). They have really good players and a great coaching staff over there.

Senior linebacker Jaharon Griffin, who finished the game with seven solo tackles, three tackles for loss and one fumble recovery, said winning Region 2-5A wasn’t the team’s only goal this season, but it’s step one in what he hopes will be a long run in the Class 5A playoffs.

“We worked all year for this, and it just feels great to be in this position,” Griffin said.

Senior kicker Hunter Bavetta scored the Rockets’ first points with a 29-yard field goal at the 5:31 mark in the first quarter, and Schoolar said having a reliable field goal kicker gave his team some breathing room when points were difficult to come by.

“I think he’s 3-for-3 for us this year (in field goals) and has only missed two PATs all year,” Schoolar said of Bavetta. “He’s been really accurate for us and has a strong leg, so when we get to the 20-yard line I feel confident we’ll get three points there.”

Ja’Naylon Dupree scored the Rockets’ only touchdown on a 5-yard pass from Eli Anderson with 11:01 remaining in the second quarter to put Neshoba Central up 10-0. With 1:03 left in the third quarter, Vicksburg cut the lead to 10-6 when quarterback Ronnie Alexander threw a 4-yard touchdown pass on fourth down, but a botched snap on the PAT limited them to just six points.

Neither team could find the end zone in the fourth quarter, and despite Neshoba Central fumbling the ball in its own red zone in the game’s waning minutes, the Rockets’ defense kept the Gators in check to force a turnover on downs and secure the win.

“The defensive line did a wonderful job of maintaining their gaps, and the linebackers flowed like wildfire,” Schoolar said. “The big guys in the secondary were knocking balls down in the end, and it was a great job by the whole coaching staff. We knew we were going to have to play really well defensively to win the ball game just because of what Vicksburg does defensively.”

Griffin also complimented the efforts of his teammates along the defensive line in freeing up him and his fellow linebackers to make plays.

“When the defensive line does its job, it allows us to roam around and be the best players we can be,” Griffin said.

And no matter how dicey things got at times, Griffin said the defense was always able to remain calm.

“We still remember our main goal: to stay focused and do our job,” Griffin said.

Anderson completed 9 of 15 passes for 57 yards and a touchdown, and he also rushed 10 times for 72 yards. Zander Kirkland led the Rockets in rushing with 81 yards on 15 attempts, and Ken Drummond finished with 40 yards on just three carries. Elijah Ruffin caught four passes for 43 yards.

Neshoba Central (9-0, 7-0) is scheduled to host Callaway next week to conclude the regular season.